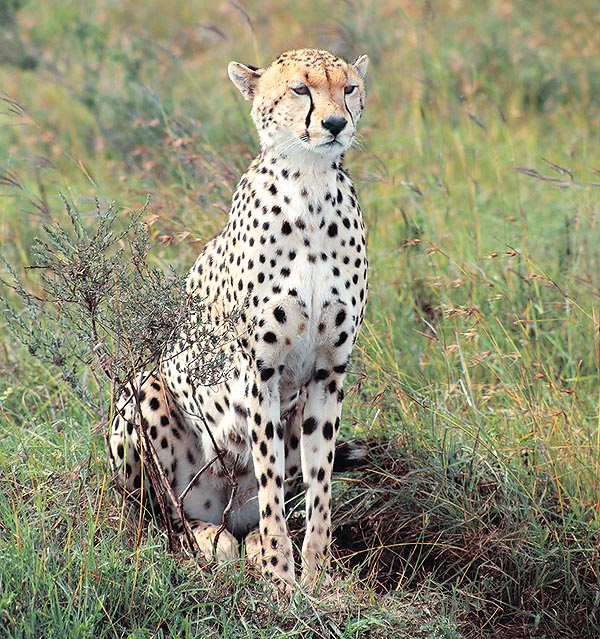 Evolutionary speaking, cheetah is an intermediate form between cats and canids © Giuseppe Mazza

Within the family of the Felids (Felidae), the Cheetah (Acinonyx jubatus Schreber, 1775, by some authors indicated as Acynonyx jubatus), occupies a special position, due to its many peculiarities which render it, let’s say so, an intermediate form between this family and that of the Canids (Canidae).

It is not by chance, that the taxonomical zoologists place the genus Acinonyx, at the bottom of the Felidae, in the systematic classification, and then treating the Canidae, due to numerous affinities with this group shown by the cheetah.

From the ethno-zoological point of view, the Acynonyx jubatus has an old history of cor- relation with the humans.

Being an animal with a rather meek nature (nothing to do with the wildness and the aggressiveness characterizing the Panthera leo, Panthera tigris, Panthera pardus, Panthera onca and the Puma concolor) it results to be the only felid susceptible to taming, in the true sense of the word, that is, accepting to collaborate with the man.

As a matter of fact, when domesticated, reveals itself as affectionate and obedient, rushing when called by the master and protecting him from possible aggressors.

Though much smaller than a puma, or a leopard, it is in fact very strong and nimble, and it might, without any problem, tear to pieces the most aggressive mastiff or Doberman.

It even accepts the imposition of the lash, thing absolutely unimaginable for a lion or a tiger. 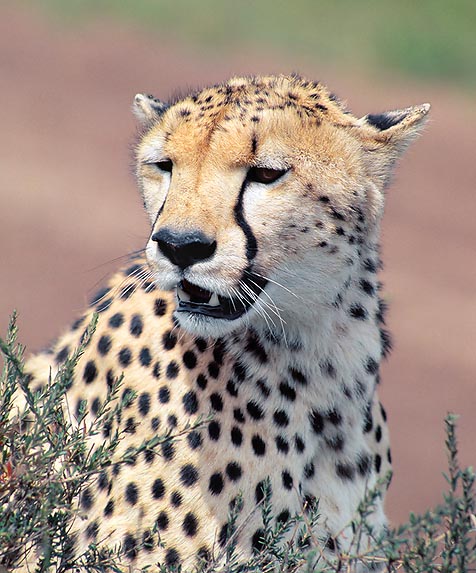 Furthermore, among many ancient peoples, such as the Egyptians, the Persians, the Indians and the Arabs, the cheetah was trained for big game hunting and, after having killed the prey, to keep guard of the same, without touching it and waiting for the master’s arrival.

On the contrary, it does not adapt very well in captivity where the spaces are limited, like in a zoological garden, whereas it will adapt well in a zoo-safari where the spaces are ampler, as they are necessary for its nature and where it will be even able to reproduce.

The Cheetah is an autochthonous species of sub-Saharan Africa, present in many regions (Kenya, Tanzania, Zimbabwe, etc.) south of Sahara, although, originally, its range did extend from Africa to India.

The coat is typical of the felids, as well as the long tail and the shape of the body.

The hair is very short, smooth, shaggy only by the neck, where a short, just outlined, mane has a fundamental ochre-yellow colouration, at times so much pale to appear almost whitish.

On the whole body stand out small black dots, roundish, sub-equal, excepting the “fourth apical” of the tail, which has a black ring. From the inner corner of the eye up to the lip there is, on each side of the snout, a dark stripe; this characteristic should be, by itself, sufficient for distinguishing it in a glance from a leopard.

The head is small, as well as the round ears; the eyes, on the other hand, are big and mild; they do not have that cold light we see, on the contrary, in the eyes of the lions, tigers or leopards. 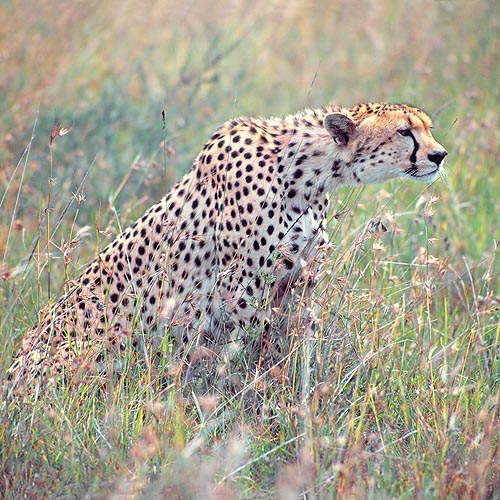 The conformation of the slender trunk, of the sunken belly, as well as of the agile and willowy line of the legs, these are all characteristics definitely peculiar to the Canidae.

Though there are, finally, muscles in charge of the retraction of the claws, their operation is so mediocre that the nails of the cheetah are subject to deterioration as rightly happens for those of the canids, and therefore are unsuitable for holding a prey and tear it to pieces.

Every now and then, we may observe specimens with a particular colouration of the coat, formed by longitudinal striae and irregular maculas (called nebulae) instead by uniform ones.

These specimens are called king cheetahs or of Rhodesia (the present Zimbabwe), once considered as an independent species; they have also observed melanistic forms and also of “erythrism” (with a totally reddish coat).

Usually, the males are little bigger than the females. They weigh about 70 kg vs. the 60 of the females.

There are various subspecies of cheetahs. Among them, we remind:

– Acinonyx jubatus raineyii, present in the Horn of Africa and in Kenya. 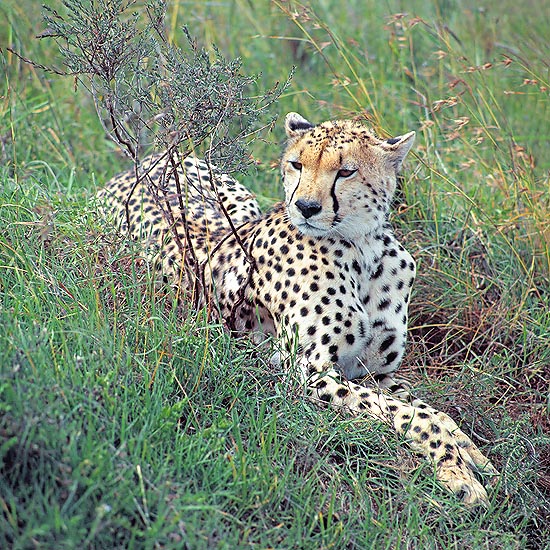 Rather mild and tamable, it doesn't have the big felines icy eyes © Giuseppe Mazza

– Acinonyx jubatus jubatus, which is the nominal subspecies of the group (the one identifying it), present in all southern Africa.

– Acinonyx jubatus raddei, spread in all central Asia, where it has now disappeared. It was called Turkestan cheetah, and is found, rarely, in some zoo-safaris or zoo-parks.

Other authors consider also other three-four additional subspecies, but the International Commission for Zoological Nomenclature (ICZN), does not deem them trust- worthy.

The presence of a subspecies in a range is in reality a relative conception, because these animals tend to move a lot, as they suffer from the alimentary competition due to the presence of other felines or canids.

Nowadays, this splendid cat lives in little anthropized areas, monitored by the IUCN, due to the low reproductive potential which characterizes it, because of its low genetic variability and by the low spermatic motility of the males. Unluckily, many specimens produce, in fact, sperms often non functional (poorly mobile or deformed “azospermia”).

The oestrum of the females follows 12 days cycles. When it comes, the female wanders nervously in the residence area, urinating each 15 minutes, thus leaving pheromonal traces meant to attract the males. 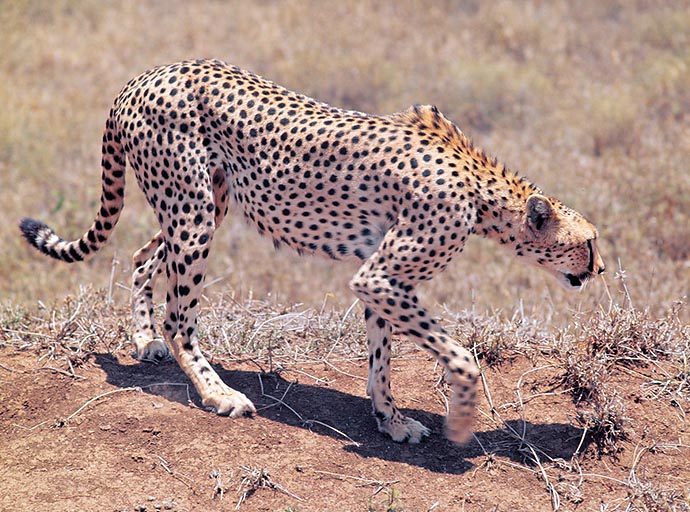 In the same time, it smells all the relevant signals left by the males, understanding from them also their health status.

Both males and females are poly- gamous, so the embryo selection is subject to the spermatic competition.

Usually, the mating seasons are in relation with the rain ones, even if the male and the female are sexually receptive all the year round.

When a male smells the trace of a female in oestrum, goes around looking for it. But this research may attract several males, which then enter in competition in a very aggressive manner for conquering the female. Once found the female in heat, by following its smelling traces, the male usually gets closer in a very odd way, uttering some moans to which will correspond, if accepted, similar answering signals from the future partner.

This is the beginning of the courting and of consequent mating. 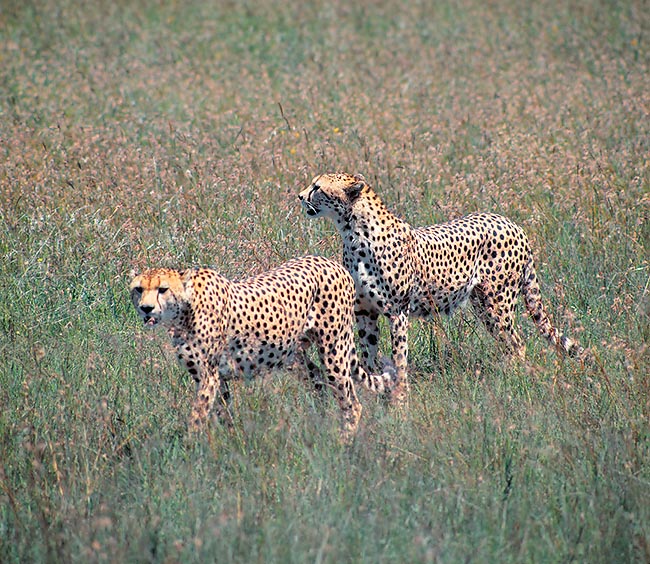 During the two days when the copu- lations take place, a male may even seize the female in the real sense of the word, and then will abandon it, looking for another one with which to couple as, on the other hand, do the females.

The pregnancy lasts about three months. The deliveries are multiple, with a minimum of 3 cubs and a maximum of 9.

When the time of the delivery approa- ches, the female seeks a sheltered area, usually in the bush, away from predators and protected from the rain, where it will give birth and will nurse the newborns.

They open their eyes when two weeks old and initially, when they are not yet able to walk, the mother leaves them alone in the den when going out for eating.

Later on, in order to avoid that the prolonged stay in the place may facilitate the infestation by parasites, takes them with it.

And this is extremely useful for beginning, at least visually, the intense training period about the hunting techniques the young will have to apply in the future, and which, at the end, stand at the base of their survival. 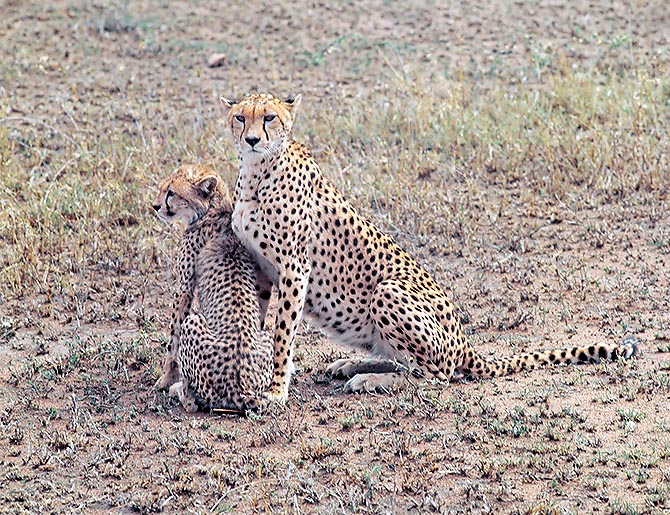 The young learn the hunting techniques from their mother © Giuseppe Mazza

By the third month, at the same time of the weaning, a moulting of the maculated coat, called “greyish hood”, takes place.

The final mantle begins to form, and this will reach its maximum splendour with the sexual maturity, at about one year of age for the males and two for the females.

Even if, as anyway happens for many other species of felines, the mother gives until the sixth month of life some not yet dead preys to the progeny, for teaching how to kill them.

A cheetah (either male or female) is in condition to hunt autonomously a Tommie (Eudorcas thomsonii) only when about one year and a half old.

As well known, the cheetah is by far the fastest existing mammal in the world.

It may in fact reach, even if for short distances (about 600 m), the speed of 110 km/h, and it is for this reason that its preferred habitats are the open savannahs and the great African prairies. 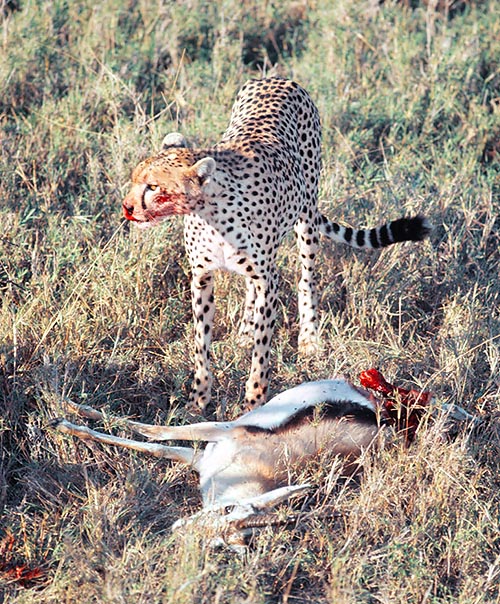 The great French biologist Bourlière calculated that the a cheetah could run along 600 m in only 20 seconds at the unbelievable speed of about 113 km/h.

The acceleration power of this felid is so high that from an initial zero speed it reaches the 70 km/h in about two seconds, what is not possible even to a very fast car.

These performances are possible thanks to a slender body, a powerful musculature, an extremely elastic spine, supple limbs and also much developed organs such as adrenal glands and liver, for a physiological answer to the very fast running.

For instance, by the moment of the ambush, the very developed adrenal (suprarenal) glands release a high quantity of adrenalin, whereas the liver mobilizes big quantities of glycogen, in order to furnish the necessary energy to the muscles.

All this is helped by a very efficient blood circulation and heart.

And, considering that most gazelles, antelopes, alcelaphi, gnus and wart-hogs do not reach the 100 km/h, these are all possible preys.

The South African cheetahs hunt also impalas and jackals. Other possible preys are the great bustards, the cubs of ostrich, the guinea fowls and the hares.

Usually, instead staying in ambush as the other carnivores, this feline shrewdly approaches the above animals, perceiving their presence thanks to its good eyesight and acute sense of smell.

Once the victim is located, it gets closer windward, immobilizing every now and then, in order not to be discovered, till when, arrived at a distance deemed sufficient, springs like a flash and fetches it in few bounces, attacking its throat with a bite and killing it through choking.