The group of the gazelles counts little more than ten species. They are Antilopinae of small size, with horns present in both sexes, but the Gazella subgutturosa, where the females have two truncated stubs, and those of the genus Procapra, which, after many biologists, are not to be regarded as true gazelles. Animals decimated by the colonization, which, anyway, have not lost, with the time, their areas of distribution.

We find them, in fact, like in the past, both in Africa and Asia, almost always in dry and barren habitats, where they can live even several months without drinking, as the water they get from the vegetables they eat is sufficient for their metabolic demand. And, after many biologists zoologists, it is indeed thanks to this incredible resistance, that the gazelles have been able to survive. In their poor habitats, with a low density of trees, it is in fact easy to sight from far away the predators, and run away when carnivores such the great felines, the African wild dogs or the hyenas, are approaching. The presence of such a wide variety of predators, is in any case justified by the necessity to keep their bio-demographic density at reasonable levels on the ecologic point of view. This density, in fact, might reach, without them, critical levels for the eco-system where they live, seen their high fertility and their rather short-lasting pregnancy.

On the other hand, evolutionally, the gazelles have set up a very ample amount of defensive strategies, variable depending on the species. But, as it happens for many herbivores, they have all discovered the advantages of the group life, in more or less numerous herds. The “sentry females” notify the presence of the carnivores, and in case of attack, many similar animals, at first sight all alike, running away in various directions, often confuse the predator, thus giving some more chances of survival. Gregarious herbivores, then, which, contrasting to their hostile habitat, are always of a statuesque beauty. With their horns so much differently shaped, the particular colours and fashion of the coat, very bright eyes, and long limbs for graceful movements and spectacular leaps, the gazelles might be thought as just coming out from the hands of an artist! The most common and known genera are Gazella, Nanger and Eudorcas, to which belong the Thomson’s Gazelle (Eudorcas thomsonii Günther, 1884), about which we shall treat on this fiche. The gazelles, like the antelopes, eat mostly plants and leaves and are therefore subject to seasonal migration for the research of food.

Essentially aggressive and territorial animals, they are friendlier during the heat time. The various sub-nuclei, formed by several members, unite in fact in community in order to better defend themselves and often join other herbivores like gnus and zebras. And seen that, besides being very fast, they are able to effect big jumps, they utilize this capacity for signalling a danger from far away. 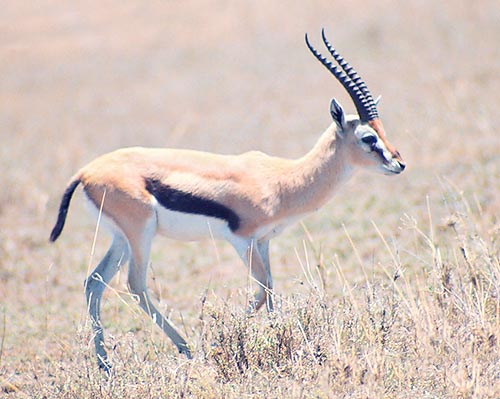 When for instance the sentry females of the Thomson’s gazelles see their worst foe, the Cheetah (Acinonyx jubatus), at a distance of about 150-200 m, they immediately inform the group by means of blunt and short puffs, small leaps of the forelimbs, on the spot, and jumps with rigid legs, till when the dominating males, seeing them, give the order to flee away.

Under these circumstances, and the same thing applies also for the other gazelles with coloured lateral bands, the Eudorcas thomsonii quiver repeatedly the black band on the sides, an evident sign of nervousness which alerts the companions about the danger. Almost always, the predators hunt the youngest specimens, isolating them from the mothers, or the sick ones, because they are unable to defend and, moreover, to run away. In the case of the Eudorcas thomsonii, the smallest gazelle, a cheetah can kill indifferently adults and young of both sexes, whilst a smaller predator, such as the Golden Jackal (Canis aureus), will prefer to attack the young. These ones are always close to the mothers, which know well how the defend them utilizing the horns and the hooves. When there is only one jackal, mother and son are almost always able to get away with it, because the mother, rightly with the horns and hoofs can manage it. But when as often happens, the Canis aureus hunt in couple, while the mother is busy with the first one, the other will kill the fawn, which in the meantime has remained alone.

The sight and the sense of smell, particularly developed, allow however to the various species of gazelles to anticipate the danger, and, in most cases, to run away. Furthermore, the status of alert and flee vary depending on the type of predator and its intentions. In presence of a cheetah, the Thomson’s gazelles become alert when this one points the herd with the sight moving towards them. They keep motionless till a distance of 150-200 m, and then flee with all haste, knowing that a cheetah can reach the 110 km/h but only for about 250 m.

In presence of jackals or hyenas, which are slower, the flight begins when they are 5-10 m far away, whilst for the Lions (Panthera leo), which reach the remarkable sprinting speed of 70 km/h, the maximum limit of approach is of 150 m. Finally, in the case of the African wild dogs (Lycaon pictus), which hunt in very populated and difficult to be controlled herds, the distance of danger and consequent flight can reach the kilometre.

The Thomson’s Gazelle (Eudorcas thomsonii), belonging to the order of the Artiodactyla, family bovids (Bovidae), subfamily Antilopinae , was described by the biologist DrSc Albert C.L.G. Günther in 1884. German by birth, but British by adoption, he honoured the species to the geologist and explorer Joseph Thomson, who sent the horns and upper skulls which allowed the first description of the species. From the seventies until the end of the nineties, some authors like the South African biologist and zoologist Kingdon, have asserted that the Eudorcas thomsonii is a subspecies or race of the Red-fronted Gazelle (Eudorcas rufifrons), which is also present in Africa. But, till now, the international society of zoological taxonomy (ICZN) has not yet made up its mind about this matter. For a not very experienced observer, at first fight, the Thomson’s gazelle can be mistaken with the Grant’s gazelle (Nanger granti), due to the colours of the coat and its presence in more or less the same range, but the dimensions, clearly smaller, make quickly the difference.

The Thomson’s Gazelles are endemic to Tanzania and Kenya, where they live in great numbers in the parks of Serengeti and Ngorongoro. But small herds can be found also in the southern Sudan. 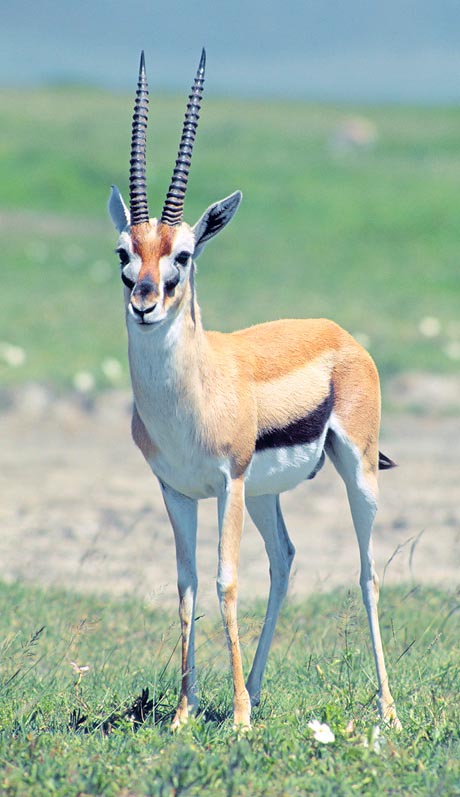 They prefer the savannahs and the open plains, where they live in herds. Open habitats and community life are, as we have seen, survival and defence strategies, especially against the cheetah. In the herds, which can have even 60 or more members, they are often mingled with some Grant’s Gazelles, easy to recognize, apart from the bigger size, for the back side, white also over the tail.

The Thomson’s Gazelle reaches the 60-90 cm at the withers, and weighs 13 to 17 kg. The coat may have a tawny-reddish colouration on the back, in both sexes; a white hairy covering is present under the tail. The belly is white, covered on both sides by a wide band of black hair. The head has a brachycephalic structure (short and wide skull), followed by a robust, but short, muzzle with a nose with two ample nostrils, character of a very developed sense of smell. Besides smelling the presence of a predator, this is useful for the males to perceive the pheromones emitted by the females through the urines, when they are in heat, in order to induce the male to the oestrum and, consequently, to the mating.

The eyes are wide and lively, symptomatic of very developed eyesight. They have ears with much developed pinnae. In both sexes, the straight or “S” bent horns, decorated with rings, reach the 20-25 cm of length.

Being ruminants, their gastrointestinal system is similar to the bovines’, that is, polygastric. They are unguligrades, like all Artiodactyla. They keep clean by scratching themselves repeatedly, but not by rolling on the ground.

It does not seem that a hierarchical order does exist in the herds with more than 60 members, often mixed with the Grant’s Gazelles. The males, however, mark their territory several times a day, rubbing the facial glands, which emit an odorous secretion, against the grass, thus leaving a not passable olfactory trace.

They prefer the sunrise or sunset hours for going around looking for food, they eat mainly grasses and succulent plants, from which they get the water necessary for their life. Usually, the females keep silent and even when they are acting as sentries, they emit only muffled sounds and whiffs of air. The danger signals are, as we have seen, more visual rather than acoustic. Only the males bell in a typical manner to assemble the females in the harem. They are polygamous. In fact, during the rutting season they copulate with the greatest possible number of females.

The social structure of the species is rather articulated. The adult males, from the age of 2-3 years onwards, are very much territorial. Before this age, the young males form small independent groups or belong to mixed ones. The females, in their turn, form their own groups which wander in the males’ territories. And rightly during these movements, the adult males try to assume the leadership of a group of females. For doing this, the adult males engage hard fights with their horns, even more times a day, in order to establish the limits of the relevant territories, which can modify, however, every day, with sudden changes, and defy the intruders: groups of young males, adult males and, quite unusually, a small male or a female. It is interesting to pinpoint how these territorial fights do not concern the specimens belonging to other species: this means that the Thomson’s Gazelle can share its territory with other ungulates. And, on the other hand, as we have remarked, they migrate in groups of hundreds or thousands of specimens, often mixed with herds of gnus or zebras.

The females have a 5-6 months lasting gestation, and the deliveries are single. They have a bicornuate concamerate uterus, with a syndesmochorial placenta. Only instance in the ungulates, the Eudorcas thomsonii may carry two pregnancies during a same year. A few minutes after its birth, the fawn is already capable to suckle the milk and to walk independently close to the mother, which protects it from the predators. For the whole of its life, the survival of the species is entrusted to the running, because, even if the cheetah is faster, the Thomson’s Gazelle beats it in resistance and is able to change direction unexpectedly. But due to the presence of a great number of predators, only half of the fawns reach the sexual maturity, which happens, for both sexes, by the second or third year of life.

The IUCN and the ICZN are trying, with programmes of Taxon Advisory Group (Taxon), to keep the population constant in some areas, to increase it in others because threatened of extinction.