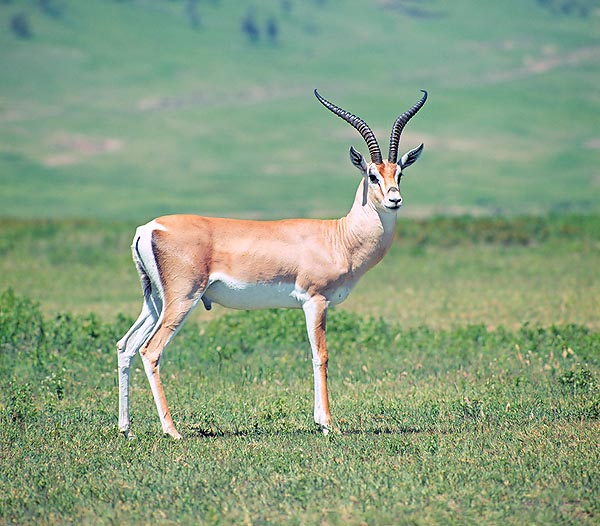 The Grant’s gazelle (Gazella granti Brooke, 1872, family Bovidae), order (Artiodactyla), is an elegant gazelle common in a rather arid steppe zone (Maasai and Somali steppe) going from the southern part of Sudan and Ethiopia, to northern Tanzania, including part of Kenya and touching the eastern shore of the Victoria Lake.

Present up to 2.500 metres of altitude, it loves open areas, interrupted by thorny bush, and the grasslands in altitude, but it goes even in sub-desert zones (northern Kenya).

Thanks to the long legs that make them true sprinters, the height at the withers touches the 90 cm in the males and the 80 cm in the females.

Both sexes have horns, showing however a remarkable sexual dimorphism: the males have ringed horns, 50 to 80 cm long, with a characteristic shape, much elegant.

Just diverging at the base, the two horns increase the divergence and then bend inside or back towards the apex, whilst the male of a more western subspecies, the Robert’s gazelle (Gazella granti robertsi), has a much stronger curvature to the outside, which, starting from more or less the third proximal, leads outward the distal part of the horns, in much more open V. To make a comparison between males of the two subspecies, I would say that the trophy of the Robert’s gazelle recalls, if seen from the front, the shape of a champagne glass, where the stem is formed by the base of the horns, whilst that of the Grant’s gazelle recalls a more slender flute.

The horns of the female are more modest, thinner and long up to 45 cm max in the oldest specimens.

The body is slender but robust and the neck, in the males, is very muscled and imposing. The background colour is brown or fulvous, with shades from very pale to dark and in some cases it may even look bronze, with vast pale zones, especially in the lower part of the sides, on the belly and on the inner surface of the paws. 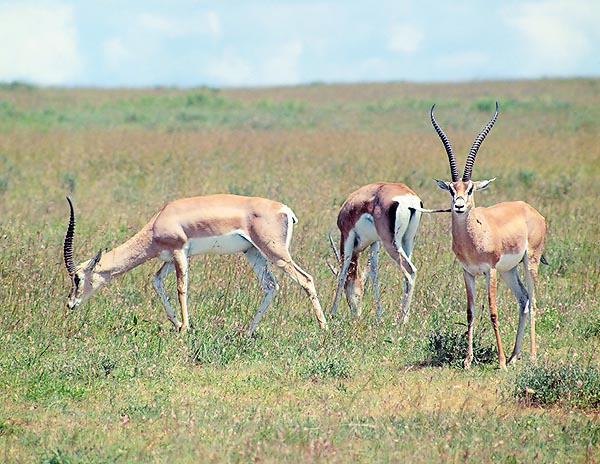 Gazella granti is a migrating herbivore, often moving opposite than the others © Giuseppe Mazza

The back of the snout is brown, listed on the sides by two white stripes, edged in turn, by two black bridles which start from the eye and extend forward.

It is a migratory herbivore that, usually, has inverted migratory fluxes compared to the Thomson’s gazelle (Eudorcas thomsonii), of the same country, the gnus, the zebras, the damalisks (topis) and to other animals water depending.

This apparent contradiction is, in reality, a strategy: frequenting in the dry season zones such as the Serengeti and the Maasai steppe, the Grant avoids the competition for the food from other species and takes full advantage of its capacity of drawing nourishment from vegetal essences that thrive in a semi-desert habitat without almost any water.

Vice versa, during the rain season, when the other herbivores migrate again towards such zones, revived by the rainfall, some populations of Grant’s gazelle move to the woody areas, with thicker vegetation, left free by gnus, zebras, etc.

Not every Grant, however, do follow this inverted flux, many adapt to the rhythms followed by the other species, so this is a noteworthy characteristic but not an axiom.

A curious pseudo-association is that which sees often Grant’s gazelles and the Thomson’s ones together. This happens even more frequently when the members of one of the two species are in a quite lower number than the mates. 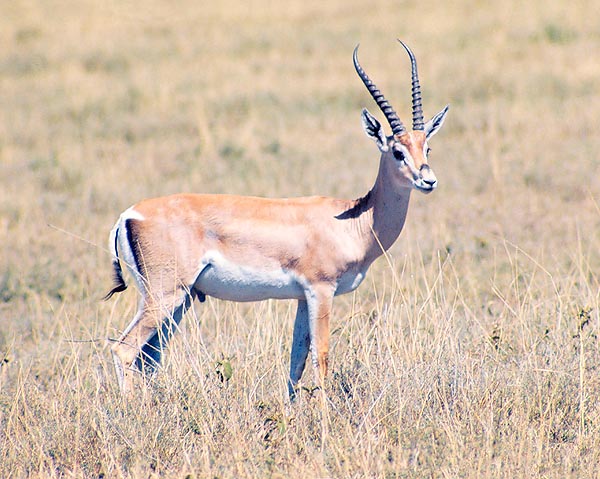 For instance, it is not uncommon to see, maybe, a male of “Tommy” in the midst of a small group of females of “Grant”. We can then define the Grant’s gazelle as migratory, gregarious and territorial.

The most numerous groups are observed in the most open areas (from 40 to more than 400 heads) whilst in the zones with thicker vegetation, the groups rarely exceed the 30 heads.

This often means that a big group of Grant, formed during the dry season, may divide in small herds when it migrates in a woody or bushy zone.

Likewise, the territoriality reaches the top when the groups are small, during the rain season, and a dominant male has more possibility to control its harem, avoiding its dispersion.

The males often form groups of “bachelors”, in rare cases all of the same age group, more often including several classes, so the exercise of the dominance imposed by more aged and mature individuals is almost a routine and it is a rather common practice in the Grant’s gazelle.

Between male specimens of the same age, often take place challenges for the hierarchical dominance, which may go from the simple “gestural” imposition, when the opponent surrenders, up to the real fight, when the opponent, of the same strength, also seeks to prevail. When the group moves the youngest and more submitted individuals must move the first, whilst the dominants follow.

Dominance, imposition and threat include a complicated range of postures and attitudes aimed to intimidate the competitor: erect posture, raised nose, profile presentation, in order to appear more impressive, till the true confrontation, which may be horns against horns, front against front, hooking of the horns with a twist, and, at times, gory blows inflicted with the tips, if the opponent opens the watch. 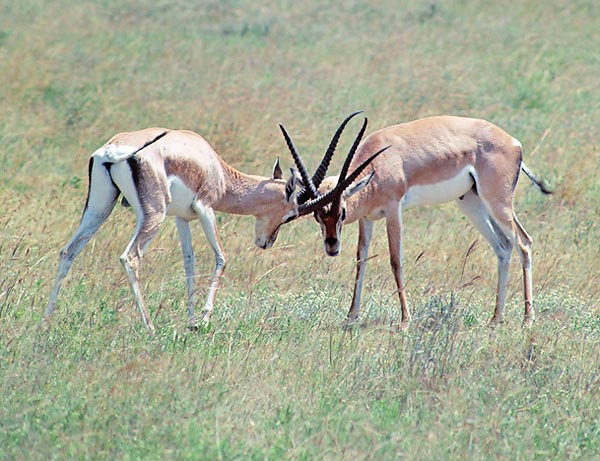 Lowering the head indicates, on the contrary, submission.

The reproduction is not strictly seasonal and the births, depending on the zones, may take place in different periods and the gestation requires about 6 months or 6 months and a half.

The female is sexually mature by the year and a half of age; the male is such when three.

One of the main reasons of success of this species is the low percentage of animals falling victims of the great predators.

A first reason is the possibility to keep away from the pools of water, places which, especially in the dry season, become real mortal traps for many herbivores, furthermore, mainly in the national Parks, where the herbivores abound, leopards, lycaons, lions, cheetahs and hyenas prefer easier preys.

Ironically, the worst foes of the Grant are smaller predators, such as the jackals (black-backed jackal and golden jackal) and at times even the ratel or the baboons, which preferably predate the cubs, when hidden in the grass, during their first period of life.

It is obvious that a jackal cannot hope to succeed against an adult male, and not even against a 50 kg female, so a mother may efficaciously defend the young from an attack of a jackal, but usually these canids go hunting in pairs during their mating season which, incidentally, often coincides with that of the births of the Grant’s gazelle fawns.

With regard to the ratel (Mellivora capensis), this is an occasional predator, but it does so, it’s far more formidable than a pair of jackals.