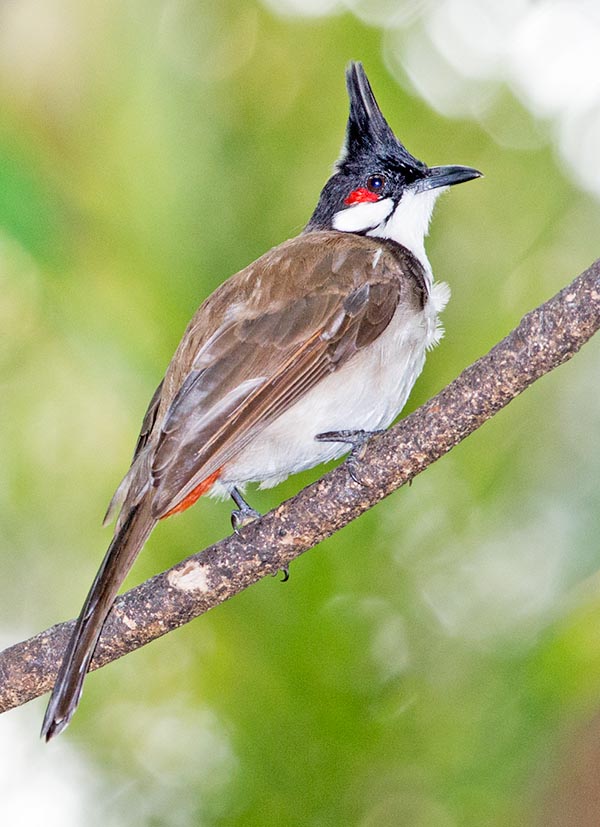 Those who have had the opportunity of staying in India, in southern China or in the Indochinese peninsula surely have had the opportunity of hearing, early in the morning, by the sunrise, when still abed, lying half asleep dozing in the humid climate of those regions, the melodious and fluting song of a bird who, on the tree closest to the window of their room, seems wanting to say good morning or, even better, to introduce itself.

Actually, the melodiousness of the song of this bird is well above that of many other consimilars though considered among the most melodious, as emitted with tones lower and stronger than the others, so much to render its voice full and sweet and without those squeaky trebles that at times disturb the sensitivity of our musical ear.

If we add to this characteristic also the joyousness of its behavior, the joy that radiates in all its actions, the docility without limit towards the human being and the facility of breeding, it is easy to understand why this bird is the most common cage bird in those countries. The Red-whiskered bulbul or Crested bulbul (Pycnonotus jocosus Linnaeus, 1758) is a bird belonging to the order of the Passeriformes and to the family of the Pycnonotidae vast group that counts about thirty genera among which the Pycnonotus that counts in turn almost 50 different species. Initially placed among the Shrikes (Lanius spp.) it has been later on reclassified in the present family of the Pycnonotidae.

We are not to be surprised if Linnaeus, already more than two and a half centuries ago, upon the description he got for this small bird, gave it as name of the species jocosus, rightly from the Latin “iocosus” = playful. The joyful character of this bird is so evident that even from a simple verbal description it would not go unnoticed even to the layman this apparent character.

On the other hand it is sufficient to cross a market or the narrow lanes of the popular districts of these nations to note how many of the homes have on the window or on the balconies or suspended just over the heads of the passers-by, cramped cages with specimens of this species. 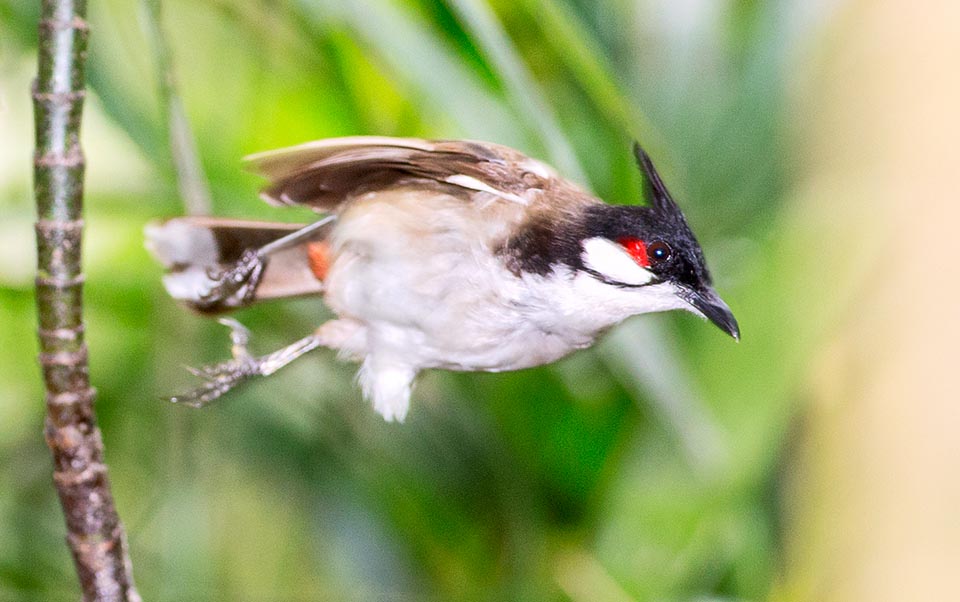 Native to central-northern India up to the Himalaya slopes, including Malaysia and the tropical part of China, the Pycnonotus jocosus has already naturalized in many Indian Ocean islands, in Australia, in the Arabian peninsula and also in USA and in Hawaiian Islands to the detriment of the autochthonous species © Giuseppe Mazza

The whole of these melodious songs always competing with each other cannot be surely get unnoticed! All bulbuls have these characteristics but only some species are chosen for this musical function.

The etymology of the genus Pycnonotus originates from the Greek terms “puknos” = thick, dense and “noton” = rump, due to the thick and consistent plumage on the lower part of the back. In the ornithological world jargon, the membres of this genus are universally called bulbuls, borrowing a name of Arab/Persian origin that still now indicates, besides the true bulbuls, also generically the melodious birds of that area. 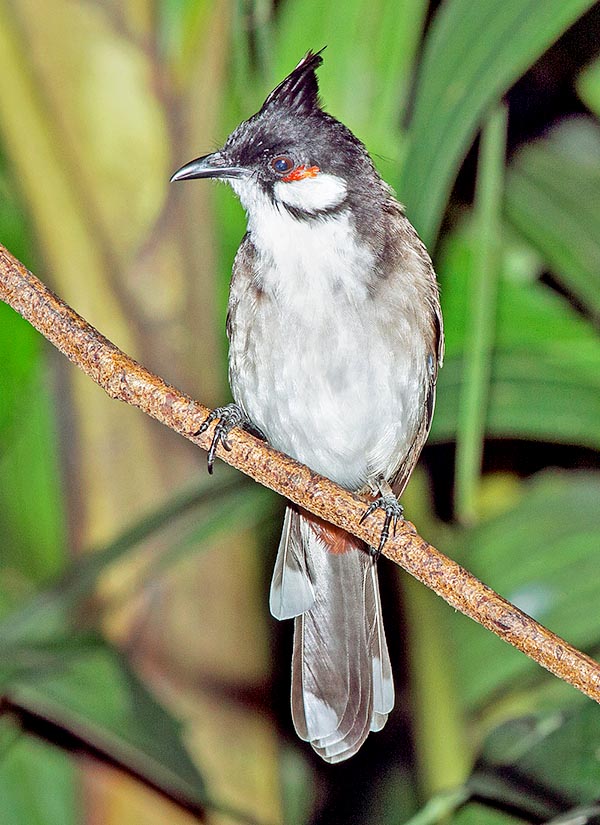 Observer and opportunist, has come in the cities from the forests, occupying alleys and gardens © G. Mazza

In fact, in English it is called Red-whiskered Bulbul, in German Rotohrbülbül, in Spanish Bulbul Orfeo, in French Bulbul orphée, in Italian Bulbul dai baffi rossi or dalle orecchie rosse, in Dutch Roodoorbuulbuul and in Polish an odd bilbil zbroczony.

This bulbul is diffused in central-northern India up to the Himalayan slopes, in all the Indochinese peninsula, Malaysia included and in the tropical part of China.

Its popularity and the ease of breeding has led to the introduction of this species in many neighbouring countries but also in quite distant continents, places where it has easily acclimatized, creating populations that now are well-established.

It is now present in many islands of the Indian Ocean, in Australia, in the Arabian peninsula and also in USA and in the Hawaii.

The ease of the bulbuls in acclimatizing and invading heavily the conquered area, damaging authocthonous species, is alarming Australia as well as New Zealand so much that this last has reached the point of creating a very high reward on the Red-vented bulbul (Pycnonotus cafer) to avoid the diffusion of a species that turns out to be quite harmful if introduced in a new ecosystem. It should be remembered that among the 100 most dangerous invasive alien species stand three nice small birds: the aforementioned red-vented bulbul, the Common starling (Sturnus vulgaris) and the Common myna (Acridotheres tristis).

Our bulbul is a sedentary species even if they have noted some short-range movements, in particular when reaching the night roosts that at times gather thousands of specimens.

The red-whiskered bulbul has a remarkable adaptation capacity and therefore occupies a significant variety of habitats. Its historical environment is since ever the tropical hilly forest, spaced by cultivated valley, thickets in densely inhabited areas, villages and rural small cities but also gardens and parks in densely populated cities, with low shrubs and surrounded by trees of a certain height.

The farms, the orchards and the animal farms are places heavily exploited due to the facility of getting food. 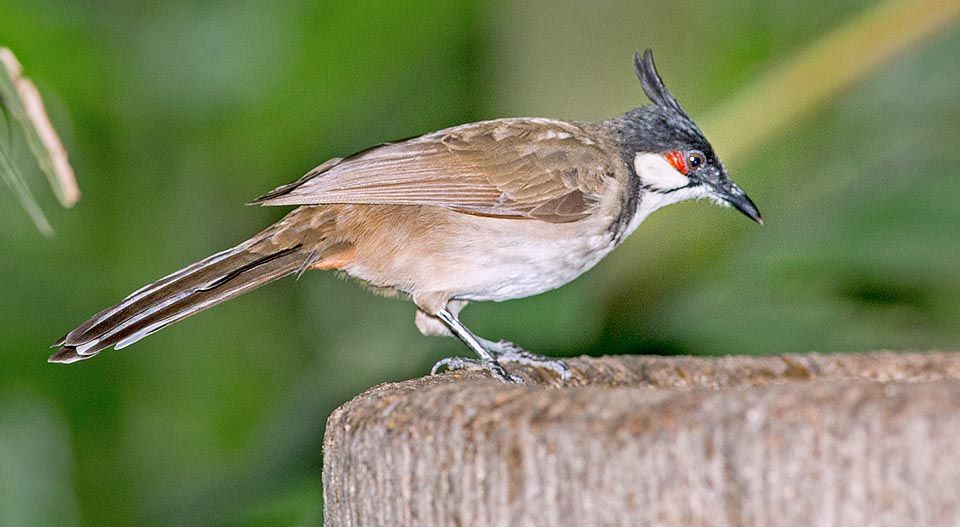 Frugivorous, here searches for leftovers on the tables in a public park but when nesting, with two broods per year, hunts also insects for a bigger protein input © G. Mazza

Its affability and temerity towards the human being, however innate in many species of bulbuls, is surely an incentive to conquer new territories and the results are getting evident with slow but progressive enlargements of the original ranges.

The bulbuls have quite similar size in the various species, with slightly bigger dimensions than those of a big house sparrow (Passer domesticus). 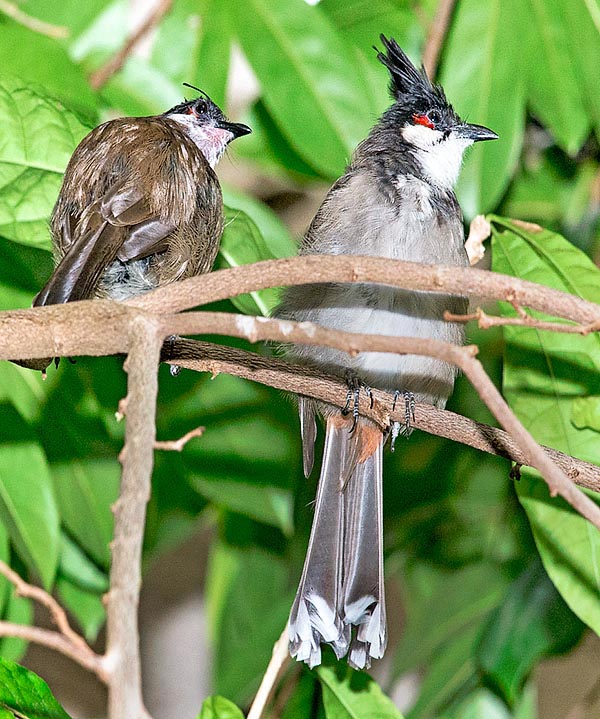 It is 20 cm long, weighs 30 g and the wingspan of 28 cm but displays a more slender and long-limbed build, enhanced also by a larger vivacity.

The plumage is mainly cream white on the chest and on the belly, crossed by two ample blackish bands that from the shoulders go down on the neck without joining.

The alar cover is compactly brown ochre that becomes totally jet black on the head and the front up to the eyes area.

On the head it has a nice very black and elongated tuft that is kept always vertical and stretched forward like a hood of a Tibetan monk, exalting the sympathy it already enjoys widely.

A livery that would go unnoticed if it were not accentuated by two notes of colour that transform it from an insignificant plumage into one of high lineage.

Candid cheeks limited by two very fine black whiskers and surmounted by a fiery red coloured spot in the post orbital area and feathers of the undertail also carmine that adorn long remiges marked in the terminal part by ample white barbs.

There is no sexual dimorphism in the livery of the adults and the young are instead recognizable due the initial absence of the red spot on the cheeks.

About ten species have been determined, relegated even in small areas inside its territory, probably as proof of the high capacity of evolution and of adaptation to the various biotopes frequented.

The nesting season of this bulbul varies depending on the latitudes and also on the altitude. In Bhutan, it begins in late spring whilst in the southernmost part of the Indochinese peninsula it can do it comfortably also during the winter months. 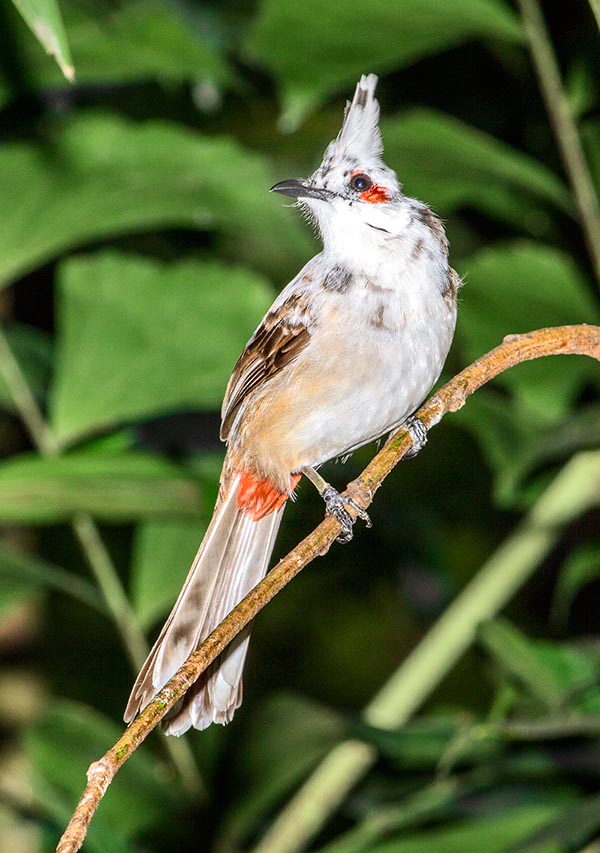 Leucistic specimen. Bred as a pet all over the world, it can exceed the 10 years © G. Mazza

Usually it makes two broods per year with the same partner who is then usually changed in the following season. The nest is built between the twigs of a shrub or even on small trees at a modest height but in the inhabited centres it choses also holes in the walls or climbers clung on the buildings.

A cup is made with small twigs, dry grasses and intertwined rootlets but inserting also modern extravagances of the human consumerism, such as pieces of coloured plastic bags, paper and pieces of cardboards or frayed ropes, imitating the behavior of our blackbird (Turdus merula).

A strange evolutionary convergence or an unusual adaptation to the modern life? It lays few eggs, usually two to four, of cream colour spotted of ochre on the ampler part and brooded probably by both partners for about 12 days. The chicks are cared by the parents for about 3 weeks but are followed also for a further period till when the become fully independent.

The feeding of the bulbuls is similar in all species being mainly frugivorous birds and consumers of vegetal products but they do not fail to integrate their diet, particularly during the nesting, with insects in the various stages of transformation.

The bulbul is a very social bird and in particular out of the nesting period, forming noisy bands they wander inside their territories. It loves to gather in the evening in large flocks to reach the shared dormitories. Among the predators it counts the local species of crows and some owls but the seizure is insignificant if compared to the reproductive success of this bird. It is a fairly common species and with a life expectancy that may exceed the 10 years, hence it is not considered as an endangered species.