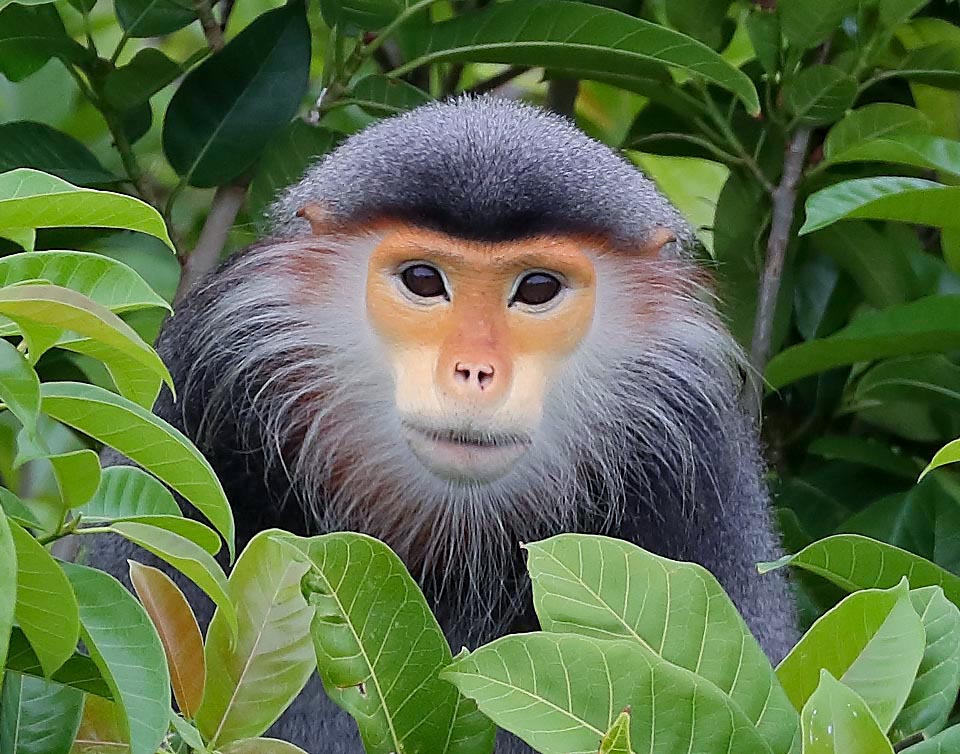 The specific term of the Pygathrix nemaeus evoikes in Latin the mythical Nemean lion, due to the clear hair around the head similar to a mane © Sheau Torng Lim

The Red-shanked douc, commonly called Douc langur (Pygathrix nemaeus Linnaeus, 1771), is a primate belonging to the family of the Cercopithecidae, diffused exclusively in Asia.

The genus Pygathrix includes two more species of langurs living in this continent: P. nigripes, or Black-shanked douc, diffused in Vietnam and in Cambodia, and P. cinerea, or Grey-shanked douc langur, native to Vietnam.

These species of Douc langur are all arboricolous and their state of conservation is rather precarious (IUCN Red List). Even if it is not sure the presence of transition zones where the three species can reproduce, there are areas in Vietnam where their distribution ranges do overlap (sympatry). 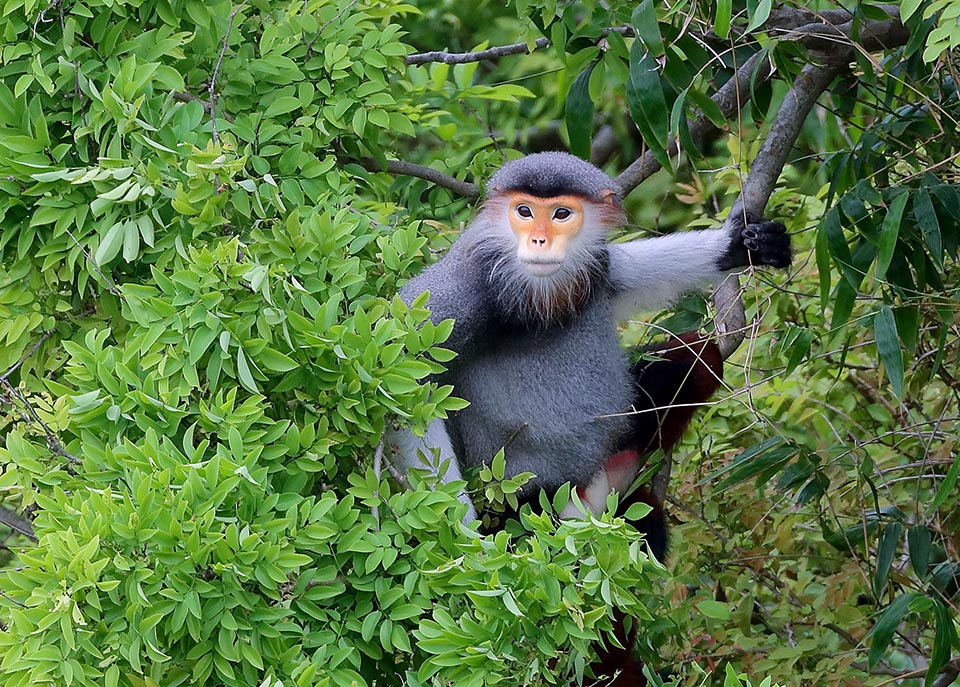 Here, in its forest. It’s a diurnal arboricolous Cercopithecid present in Vietnam, and Laos up to 1600 m of altitude © Sheau Torng Lim

The name of the genus Pygathrix comes from the Greek epithets “πυγή” (pugḗ) = buttocks, and “θρίξ” (thríx) = hairy, whilst the specific epithet, nemaeus evokes, in Latin, the mythical Nemean lion, because of its clear coat around the head, similar to a mane.

The Langur doucs live only in Asia, particularly in Vietnam (northern zones) and in Laos (central-southern zones).

They are animals colonizing the evergreen or semi-evergreen forests, characterized by a vegetation of tropical type with wide leaves and of conifers. Their habitat extends up to altitudes of 1600 m, where the “limestone forest”, a vegetation of the calcareous hills grows. 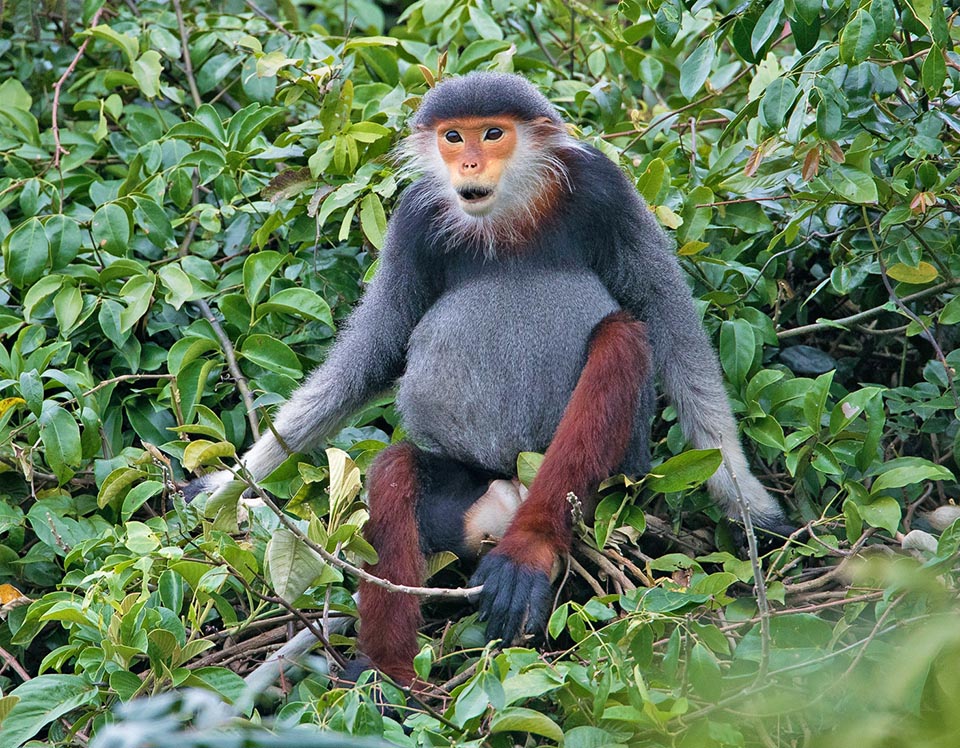 Peculiar characteristic of this species with elegant shades of grey, commonly known as Red-shanked douc, is rightly the presence of a brown reddish hair from the knee to the ankle, in marked contrast with the black colour of thighs, rear, back and fingers, whilst the forearms, the tail and the mane are white © Rob Drummond

The most important characteristic of the Red-shanked douc is the presence of a brown-reddish hair from the knee to the ankle, that creates a striking contrast with the lumbar zone and the legs, both black.

The 55 to 72 cm long tail is white and is utilized mainly for keeping balance when on the branches and at the end of the jumps. The central part of the body is characterized by long hairs, with a hazy colouration ranging from black, predominant in the zone of the shoulders, to grey-white on the chest area.

Also the arm has a clear-grey colouration, whilst the forearm distinguishes with a bright and white colouration. Finally, the hands are black. 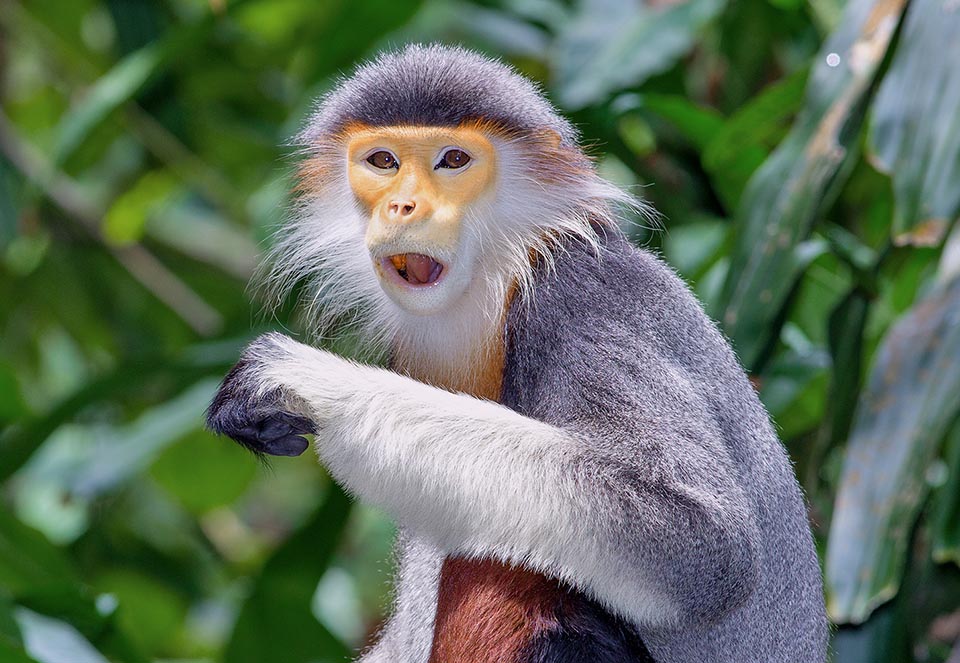 Even if chews some fruit, at times going down to the ground to pick up the fallen ones, the diet of Pygathrix nemaeus is based at 82% on the leaves © Giuseppe Mazza

The zone of the neck is characterized by a reddish collar, more or less extended, followed by a stripe of long white hair that grants this primate its lion appearance.

The male genitals of this species are peculiar and present a contrast of colours characterized by white scrotum and bright red penis when erect. The male, unlike the females, have patches of lighter hair on the back. 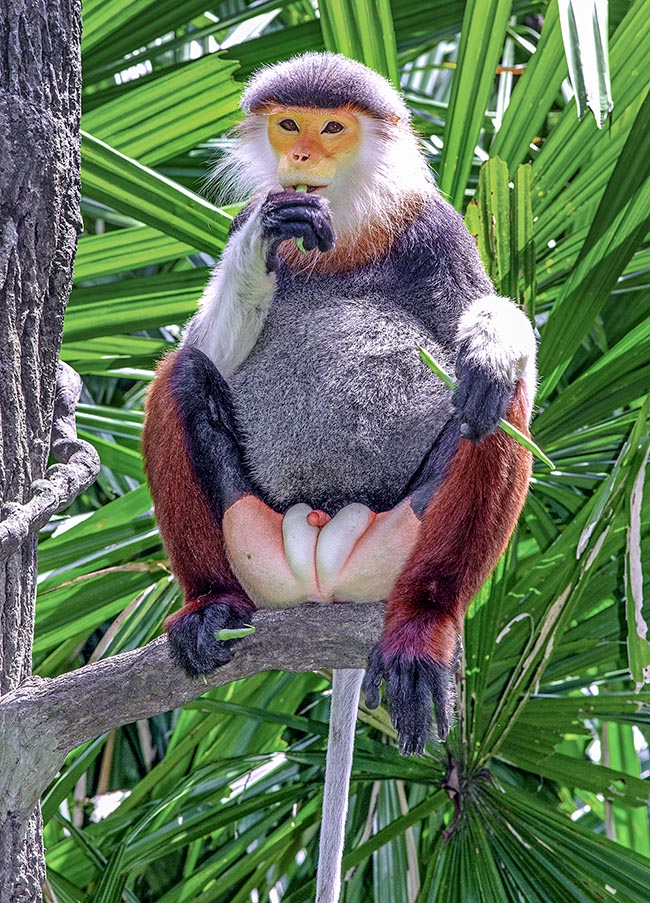 The male genitals of Langur douc present a typical contrast of colours between white scrotum and the bright red penis in erection. Unlike females, the males have also spots of clearer hair on the back © Giuseppe Mazza

The Red-shanked doucs are diurnal animals that only occasionally go move the ground to pick up fallen fruits or seeds.

Their diet is strictly herbivorous and consists of leaves (about 82% of the total diet), fruits and fruits.

They are animals that prefer the young and tender leaves, easy to digest in their particular stomach organized in nooks, called “sacs”, colonized by bacteria, that contribute in breaking the bonds of the cellulose.

Usually, they also nourish of flowers, of not too ripe fruits and of seeds. The fruits as well as the leaves are selected with a lot of care, and when they are too ripe they are rejected. A particular aspect of their diet is that of drinking little water, as the necessary daily water input is already present in the food they consume.

The Pygathrix nemaeus are social animals. They live in mixed groups, mainly formed by females, under the authority of dome males, each one with its own small harem (polygynous basic unit).

Inside the group exists an intrasexual hierarchy, where the individuals of the same sex establish a relationship, of dominance as well as an intersexual hierarchy, seen that the male is always dominant on the female.

The groups, formed by the basic units, can be quite numerous and gather together even 50 members.

The populations and the home range depend on the quantity of food and on the shelter’s availability.

Even if contained, the movements are necessary to recover the necessary food resources. The annual time spent by the animal in movements is esteemed to be of about 10% of the “time budget”. The movements take place on the trees and are led by the older adult males.

The females with the young babies move in the center, the safest position, whilst the young males close the line protecting the group from possible ambushes. 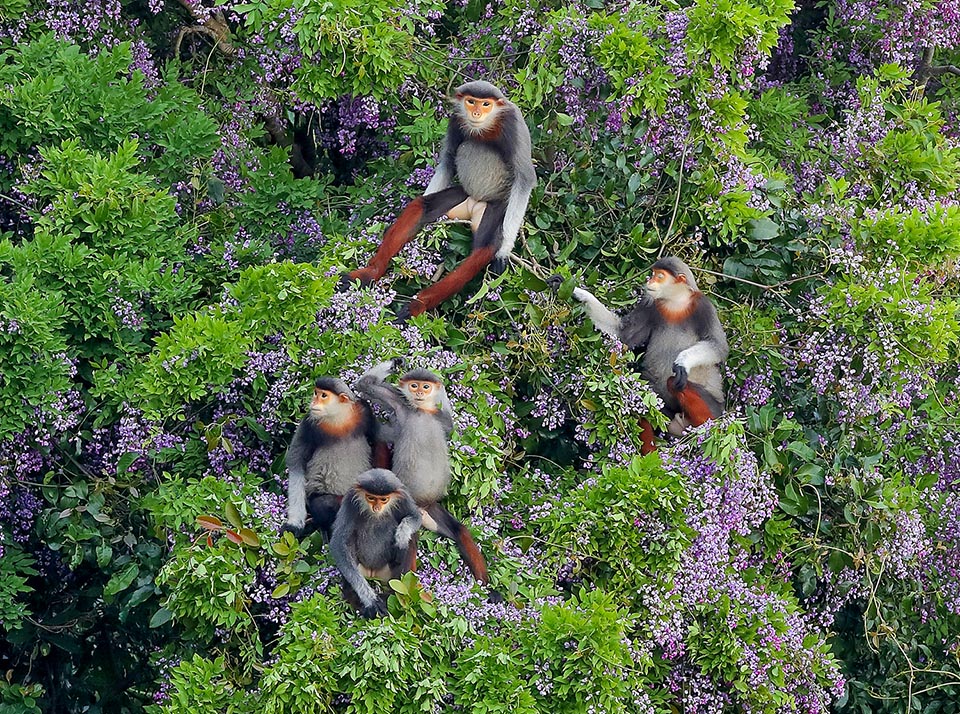 They live in mixed groups made mainly by females, under the authority of the dominant males with their small harem © Sheau Torng Lim

The facial expressions seem to play an essential role in the communication of this animal, especially when playing, through the “play face”, where the players open their mouths and display their teeth in a synchronized way. The players assume an attitude of threat or of submission typical to the sexual/reproductive and aggressive spheres of adult life.

As an average, a captive individual’s life may last about 25 years.

The females reach their sexual maturity when 4 years old; the males when 4-5.

In mating, it’s the female to make the first move by exhibiting to the male the swollen and reddened perineum. At times, to draw the male’s attention to its genitals, it can show up bent. This position indicates the male that the female is ready for the copulation. 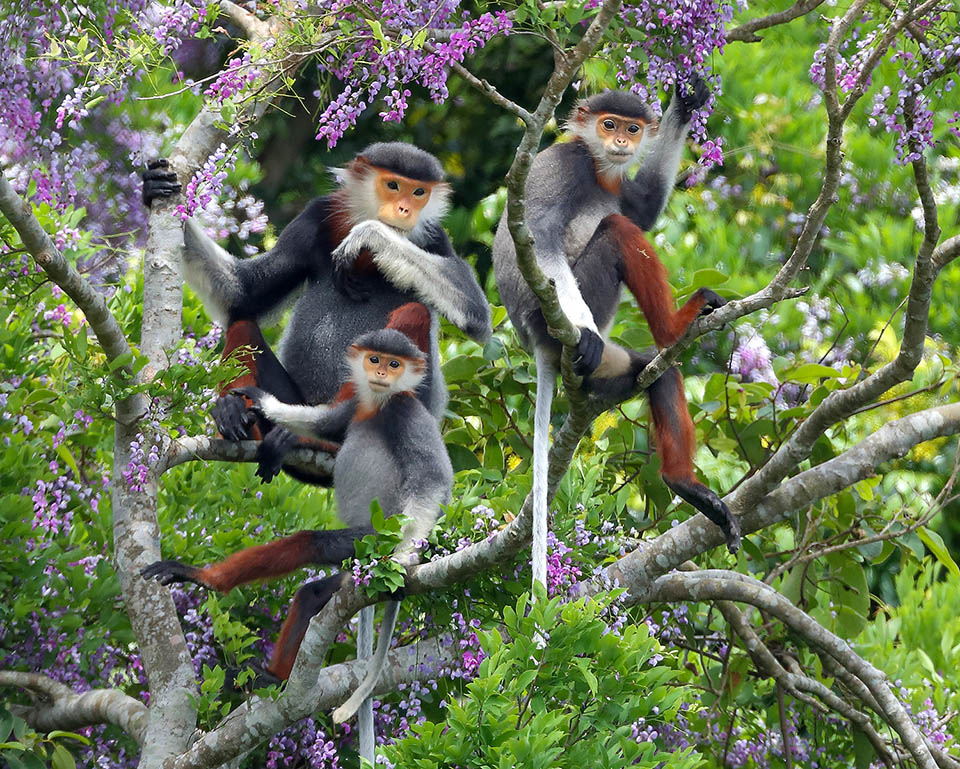 They spend the day hours moving from tree to tree also looking for flowers. They drink little because the water is already present in the corollas and the tender leaves they eat. They are digested thanks to a particular stomach with sacs with nooks colonized by symbiont bacteria that contribute to break links of the cellulose © Sheau Torng Lim

The mating season for this primate goes from August to December. The pregnancy lasts about 165-190 days, and the female gives birth to only one baby, rarely to two twins.

The peak of births goes from February to June, when food is more abundant. Upon birth, the baby has a colouration paler than that of an adult, black snout and yellowish bands under the eyes. The growth reverses the colouring and renders the face clearer, tending to white, whilst the body darkens up.

The Red-shanked douc is an animal under serious risk of extinction after the IUCN Red List. It is a species reported in the Appendix I of the CITES (Convention of International Trade in Endangered Species) and in the laws issued for the conservation of rare animals under risk of extinction in Laos, Cambodia and Vietnam. 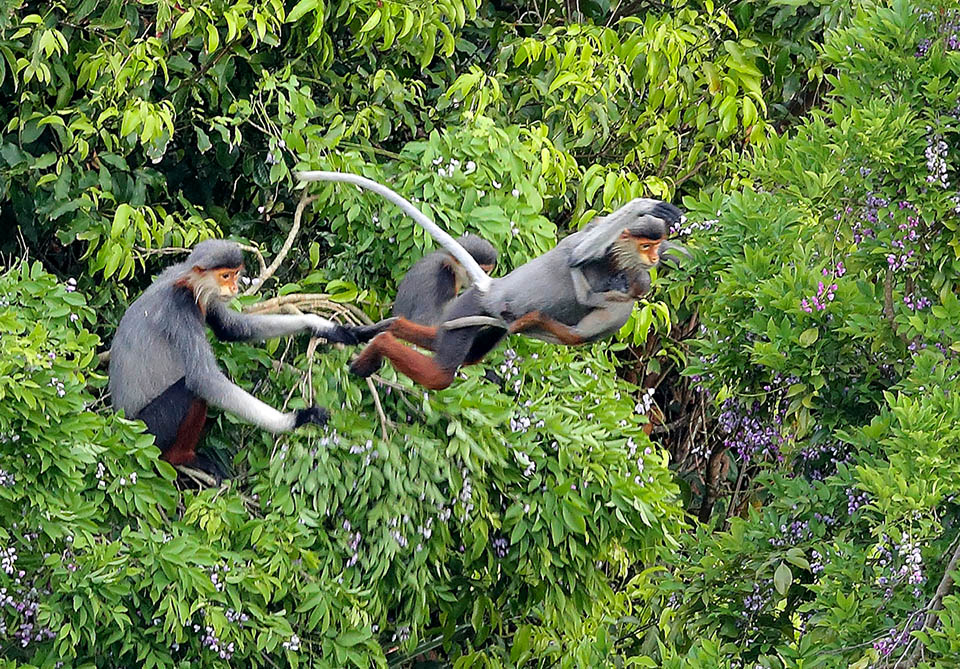 The not prehensile tail serves to maintain balance on the trees and in the jumps. Here, flying among branches, a female with baby © Sheau Torng Lim

Hunting threatens seriously the safeguard of this animal. To the local one, associated with the feeding of the local populations, we must add the international black market for rare and valuable pets.

In Vietnam, the bones of this primate are utilized in the popular medicine, pulverized and added to medleys used for treating various ailments.

Another threat comes from the progressive loss of the habitat, due to the increasing deforestation linked to the cultivations.

Being an almost exclusively arboricolous species, nourishing of leaves, flowers and fruits, the loss of the forests is nowadays a risk factor no less serious than the poaching.