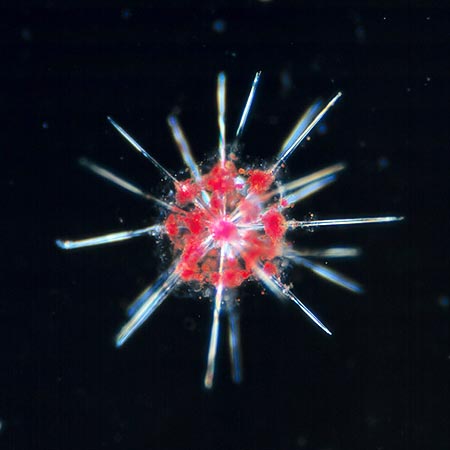 Following are the taxonomic characters taken into consideration when subdividing the Radiolaria in the different categories: composition and shape of the shell, form and size of the skeletal spines.

Among the various classifications of this group of fossils presented by several authors, one of the most accredited, mainly based on the morphological characters, in the composition of the skeleton, is that proposed by Campbell in 1954, which is articulated in 4 suborders, 23 superfamilies, 103 families, 182 subfamilies, more than 900 genera and about 6.000 species.

During the last years, the classification of the Radiolaria is submitted to continuous rehashes in the ambit of the superorders, of orders, suborders, families, genus, for the constant discovery of new specimens in the oceanic and marine depths, an for the utilization of other palaeontologic, morphometric characters, to which are added cytobiologic datas (keeping in mind that they are monocellular organisms, in case, aggregating, they form colonial complexes such as the Sphaerozoum punctatum) for building up the most possibly complete natural history and taxonomy.

Since from the times of the German embryologist zoologist Ernest Haeckel, XIX century, who was one of the first and most important scholars of these organisms (having often characters at the border between animal and vegetal kingdom), in which he was interested for his studies on the research of the Progenota, the precursor form of all living organisms (both vegetal and animal), that is the first living being, for which he was deeming the radiolarians to be the probable candidate, there was an ardent discussion about their classification.

They turn out to be among the most numerous fossils extant on the planet. They have appeared in the Paleozoic (from the old Greek palaios: old and zoe: life, in conclusion, the age of the old life) about 550 million of years ago, up to nowadays. 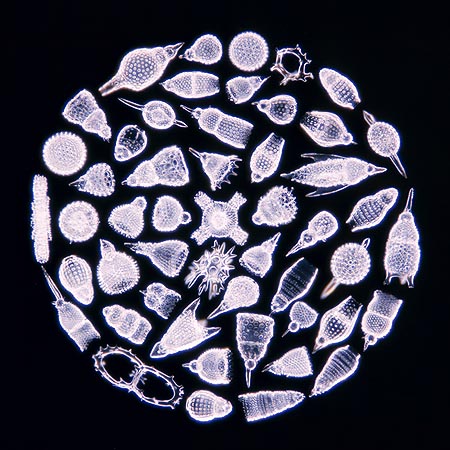 The Radiolaria have the cytoplasm subdivided in an external portion and an internal one, as regards to a membrane variably perforated formed by pseudo-chitinous material and called Central Capsule.

One or more nuclei are contained in the intra-capsular cytoplasm. Most of the radiolarians do have a well developed skeleton formed by Silica (SiO2) or by Strontium Sulfate (SrSO4).

Usually, the are pelagic marine forms (in Biology, Pelagic is an organism which swims or is transported by the current and carries out most of its vital cycle far away from the bottom, contrary of Benthic). The presence (in the different hetero-forms) of drops of oil and of fat and of bubbles of cytoplasm full of carbon dioxide (CO2), together with the spines on the skeleton and the pseudopodia, some times at radial symmetry, give it the capacity of floating.

By the end of their vital cycle, they tend to precipitate towards the bottom of the seas and the oceans. Incidentally, their skeleton is known to the paleontologists as one of the most ancient fossil forms, the muddy bottom characterizing the oceans, is for the most formed by these skeletal fossilized structures, so much to originate the denomination of “radiolarian mud”.

Some examples are Acanthometron (order Arthracanthida), which has a typical skeleton structure with radial symmetry, and skeletal spines present at 360°, and Aulucantha (suborder Tripylea) which has a well visible central chitinous capsule, having three uneven openings, with, in correspondence to the biggest one, the phaeodium, structure formed by the accumulation of catabolites or pigments. This characteristic has given the suborder also the name of Phaeodarina.

Radiolaria was last modified: May 18th, 2018 by Giuseppe Mazza