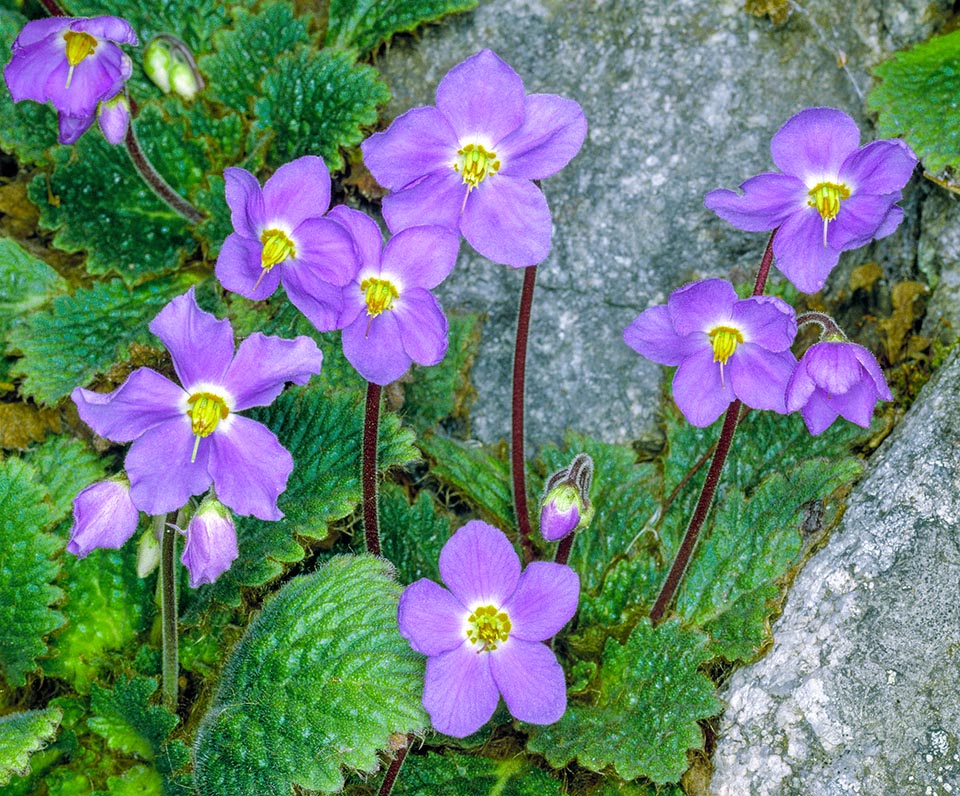 Endemic to Pyrenees and surroundings, up to 2000 m altitude, Ramonda myconi belongs to the exotic Gesneriaceae family, frequent in the tropics © Giuseppe Mazza

The Pyrenean-Violet (Ramonda myconi (L.) Rchb, 1831) is, without a doubt, one of the botanical jewels of the Pyrenees and nearby mountains, where it is endemic.

This mountain range, located in the southwest of Europe (Spain, France and Andorra), represents one of the main nuclei of plant diversity of this continent. In the summer season, the curious visitor who crosses its ravines and limestone gorges will enjoy the beautiful purple flowers of this tropical-looking rupicolous plant.

It belongs to the Gesneriaceae, a wide family mainly distributed in the tropical and subtropical regions of the Old and New World, with some species in temperate zones (southern Europe, Himalayas, China, southeastern Australia, New Zealand and southern Chile). Its best-known member is perhaps the African violet (Saintpaulia ionantha), used as an indoor ornamental plant, and to which our species closely resembles. 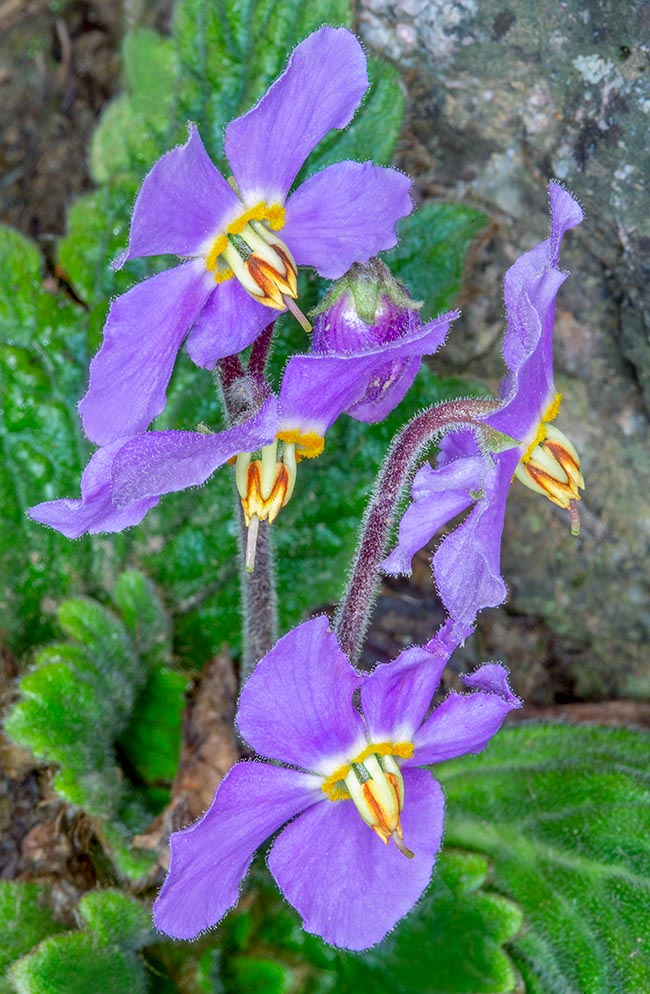 The flat, purple, wheel-shaped corolla has 5 hairy oval lobes and reaches 3,5 cm in diameter. In the center, 5 erect stamens emerge from a yellow or ornage velvety ring. They form a cone from which protrudes a long style © Giuseppe Mazza

According to different authors, this family comprises between 140 and 150 genera and ca. 3500 species. It belongs to the order Lamiales, within the clade Asterids, according to the Angiosperm Phylogeny Group classification system (2016).

The genus Ramonda was created by French botanist and illustrator Louis Claude Richard (1754-1821), who dedicated it to his compatriot Louis François Élisabeth Ramond (1755-1827), baron de Carbonnières, politician, botanist and passionate highland geologist , who explored the Pyrenees mountain range. The specific name myconi refers to Francisco Micó (1528-1592?), a catalan physician and botanist who discovered the plant during his herborizations on the Montserrat mountain (Barcelona) and whose description first appeared in the Historia Generalis Plantarum by Jacques Dalechamps, which gave it the name Auricula ursa myconi.

Ramonda myconi is a hemicryptophyte (plant whose buds are located at ground level) with leaves arranged in basal rosettes, scapose (devoid of leaves) floriferous stalks and numerous thin roots. The leaves, up to 8 x 5 cm, are strong, rough, dark green, with ovate to romboidal blade, wedge-shaped base and a crenate-toothed margin. They are abundantly covered by hairs, short and white in the upper side and long and ferruginous on the underside. The petiole is short and is also covered by abundant long ferruginous hairs.

The floriferous stalks or scapes are glandulous, garnet colored, and carry 1 to 6 flowers. The calyx, persistent in the fruit, has 5 greenish lobes with obtuse ápex, up to 3,5 mm. The corolla is violet (rarely white), up to 3,5 cm in diameter, flat, rotate (wheel-shaped), with a very short tube and 5 ovate hairy lobes. It has a velvety yellow or orange ring in the center.

The 5 stamens are erect and meet forming a cone from whose center a long style emerges. The fruit is an ovoid capsule that opens at the junction between the two carpels and bears numerous ellipsoidal seeds with ornamented surface, approximately 1 mm long.

It grows in shady and cool environments, in limestone rocks facing north and in gorges, in areas dominated by coniferous or deciduous forests, from 500 to 2000 m of altitude. It occupies cracks and crevices in rocks with a thin layer of soil, frequently covered by mosses, where its seeds can germinate.

Haberlea: corolla tubular, zygomorphic (with a single plane of symmetry), 4 stamens with anthers cohering in pairs. Only a single species, Haberlea rhodopensis, endemic to Bulgaria and northeast Greece. 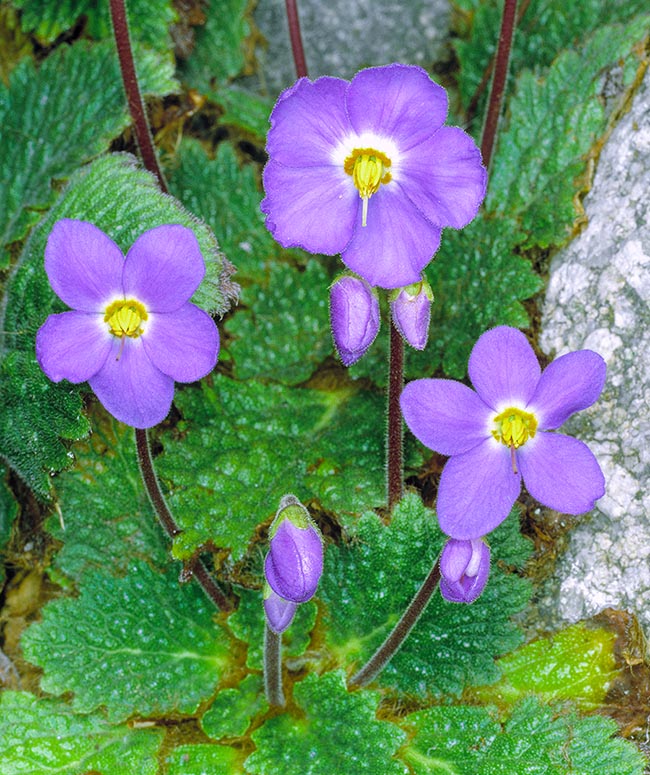 The flat, purple, wheel-shaped corolla has 5 hairy oval lobes and reaches 3,5 cm in diameter. In the center, 5 erect stamens emerge from a yellow or ornage velvety ring. They form a cone from which protrudes a long style © Giuseppe Mazza

Ramonda: corolla flat or slightly campanulate, pentamerous (Ramonda myconi and Ramonda serbica) or tetramerous (Ramonda nathaliae), with large lobes, leaves with green upper side and ferruginous underside. Of the three species in this genus, R. serbica is the one with the largest range, from Albania and Serbia to northwest Greece. R. nathaliae is found in North Macedonia, Serbia and northern Greece.

They are species of great botanical interest due to their condition as paleoendemisms and their ability to survive in a dehydrated state, what are known as “resurrection” plants or, to use a more exact term, poikilohydric, from the Greek “poikilos”, variable, and “hydr-” (hýdōr, hýdatos), water.

Paleoendemisms are species that in the past were more widespread but nowadays are restricted to small geographic areas. The European Gesneriaceae represent relicts of the tropical and subtropical flora that flourished in Europe during most of the Cenozoic, when the climate was warmer and more humid.

The colder and drier climate since the Pliocene caused the disappearance of many species, while others found refuge in sheltered places in mountainous areas of southern Europe, such as canyons and north-facing walls, with more stable humidity and temperature conditions.

However, these sheltered places are subject to dry summers and winters with sub-zero temperatures. To survive these conditions, European gesneriaceae are able to regain their normal physiological activity after severe dehydration of their tissues, a common ability in lichens, liverworts and mosses, but extremely rare in angiosperms.

Another surprising aspect of these plants is their longevity. Thus, the populations of Ramonda myconi are formed by plants with an age of 200-250 years. The age at which they attain the minimum size for reproduction is about 70 years.