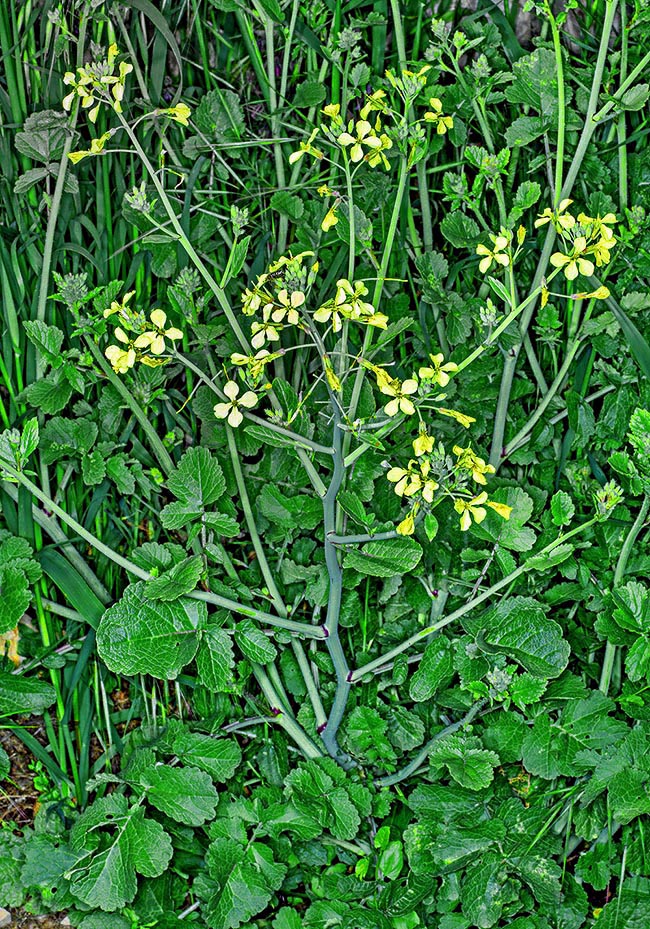 Native to the Mediterranean Region but naturalized in most of the world, the Wild radish (Raphanus raphanistrum) is an annual fast-growing herbaceous species, with taproot root, that reaches the 80 cm of height © Giuseppe Mazza

Raphanus raphanistrum L. is a species belonging to the family Brassicaceae, tribe Brassiceae, native to the Mediterranean region, to Europe and to south-western Asia. It has naturalized in vast areas of the world and in America and in Australia is considered as an invasive plant.

Known with the common name of wild radish, winter radish or wild rape, grows mainly in sandy-slimy soils with low pH (acidic soils), with a high luminous intensity and sufficient rainfall. It is found in uncultivated lands, along the footpaths, in the ruderal environments, in the cultivated lands, from the sea level up to 1300 m of altitude in the temperate areas, up to 2900 m in the tropical ones.

Raphanus comes from the Greek “ῥάφᾰνος” (ráphanos), Lat. “raphanus”, horseradish, radish, from “ῥα” (rha), contraction of “ῥίζα” (rhiza), root, and from the verb “φαίνω” (phaíno), to appear, alluding to the fast growth of the plant.

The specific epithet raphanistrum, comes in Latin from “raphanus” with suffix “istrum” (wild radish), that means, in a derogatory way compared to the Radish (Raphanus sativus), the rusticity of this species.

Raphanus raphanistrum is an annual herbaceous plant, 20-60 (-80) cm tall, usually bristly, with taproot root, thin not tuberous, and with erect or prostrate stem, simple or ramified.

The basal leaves have 1-6 cm petioles and oblong, lirate, 3-15(-22) x 1,5 cm lamina, at times undivided, with toothed margin and obtuse or acute margin. The lateral lobes, smaller than the terminal one, are 1 to 4 on each side of the median vein and have a 4 x 2 cm oblong or ovate shape.

The cauline leaves are usually subsessile, often undivided and tootherd. The flowers are merged in terminal racemes that extend in advanced blooming. They are tetramerous, with 4 oblong sepals, 7-11 x 1-2 mm, little pubescent, violaceous and 4 (1,5-2,5 cm x 4-7 mm) obovate petals, with blunt and clawed (1,5 cm) apex, of yellow or white cream colour with dark brown or purple veins. The stamens are 6, tetradynamous (4, long, arranged at the centre of the corolla and 2, shorter, lateral) with thin 7-12 mm filaments, and 2-2,5 mm anthers, sagittate at the base. The ovary is superior, syncarpic.

Usually, blooming takes place from March to June, at times until July. Pollination is entomogamous done by a vast variety of insects, but especially by bumblebees (Bombus spp.), honey bees (Apis mellifera), butterflies and hoverflies.

The fruits, not approached to the fructiferous axis, are cylindrical siliques, lomentaceous, erect or sub-erect, pedunculate, indehiscent, 3-6 cm long, with (3)5 – 10(15) articles, each with 1 seed, with 10-30 mm long beak. The fruitification occurs from June to October. The seeds are oblong, or ovoid, 2,5-3,5 x 1,8-2,5 mm, of colour varying from reddish brown to very dark brown. 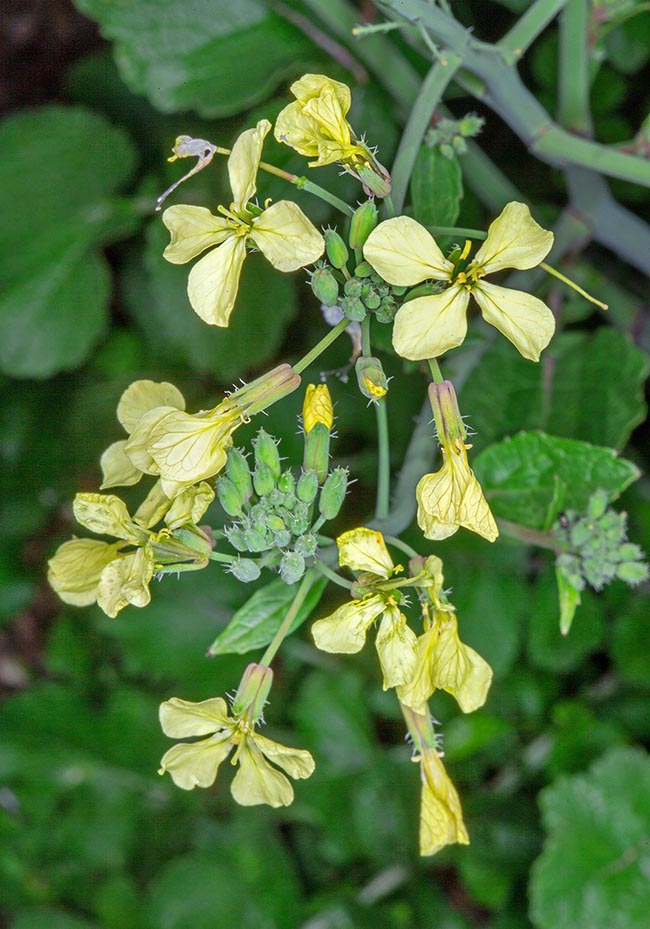 The leaves are edible, and every part of the plant is employed in the traditional medicine © Giuseppe Mazza

The diploid chromosome number is 2n = 18.

In Europe germination happens in March and in April, but the seedlings may continue to appear until late autumn, this is explained by the gradual but continuous breaking of the siliques buried in the ground that have an inhibitory effect on the germination of the seeds.

In Australia, germination usually occurs after the autumn rains but can continue all over the year. It has been proved that the temperature of germination varies from 5 °C to 35 °C, with an optimal temperature of 20 °C. The seeds are able to pass unscathed through the intestines of many animals, birds and bovines included, and buried into the ground with the fruit extend their longevity.

The wild radish finds employment in the traditional medicine of numerous populations. The leaves, the seeds and the roots, under the form of juices and syrups, are used because of their diuretic and expectorant properties. The crushed root is used as poultice for the burns, bruises and the bad foot odours. The slices of roots, if covered with salt for half a day, crushed, produce a juice that can lighten the face spots (freckles) and the dark spots of the skin.

The wild radish produces glucosinolates (GSL), phytotoxins that, if planted in the ground, are useful for contrasting the invasive grasses (biofumigation). In fact, always more often, instead of using herbicides, are incorporated into the ground the plants of wild radish when in bloom, being in such a period the GSL quantity maximum, for the suppression of weeds.

Recent studies have proved that the wild radish is a source of beneficial compounds, among which the vitamin E, polyunsaturated fat acids (such as the alpha linolenic acid) and several phenolic compounds. These findings evidence the importance of recovering the use of this wild vegetable in our diet because it can bring numerous health benefits. Moreover, it has been proved that extracts of Raphanus raphanistrum inhibit several Gram-positive and Gram-negative bacteria.

In Mexico, the leaves of Raphanus raphanistrum  are utilized  for feeding the cattle and, in absence of food, they are eaten by the people. Also in Italy, but also in other Mediterranean countries, the tender leaves and the young buds are consumed, basically raw or, more frequently, cooked.

In South-East Asia, due to their strong and rather spicy taste, they are utilized in addition to broths or vegetable soups or to cooked mixed salads. If boiled, they are seasoned with oil and salt, adding, if wanted, ail and chili pepper, as side dishes of meat or sausages dishes.

In Pakistan, the leaves are eaten raw in salad. In North and Central-Eastern Europe, the wild radishes are utilized raw, finely chopped, to confer a spicy taste to the salads, the omelettes, the ricottas, the fresh fromages. 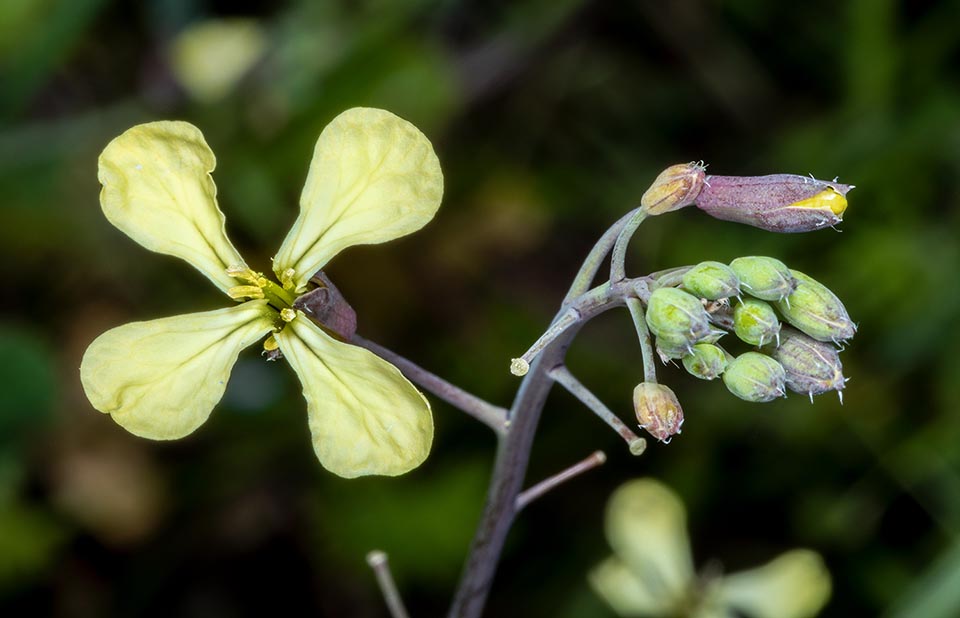 The flowers, merged in terminal racemes, show the typical cross structure of Brassicaceae. In Europe they bloom May to July, pollinated by bumblebees and bees © Giuseppe Mazza

They often accompany the onion soups, whilst the seeds, in England, have been used as the mustard substitutes. Also the young buds are added to the salads. In some places of Central Europe, with high consumption of beer, the roots are chewn to stimulate thirst in the glassfuls of beer.

The wild radish is also one of the grasses infesting the cultivations of various nations where it has been introduced. It is mainly found in North America, more abundant in the coastal eastern and western regions of the USA, in Mexico, Central America, South America, part of Africa, Atlantic Islands, South Australia. In Canada it is present in an ample variety of habitats, including the fields cultivated with wheat, colza, potatoes, clovers, peas, bulbs, hop, the gardens, the orchards, the open woods, the reefs, the beaches, the road edges, the rails, and the disturbed sites.

In Australia, the wild radish, probably introduced in the mid-nineteenth century, has diffused damaging the agricultural cultivations. During the last 40 years, in order to limit damages, the glyphosate has been widely used, but it has been recently discovered that two local biotypes of radish have proved to be resistant to the glyphosate. 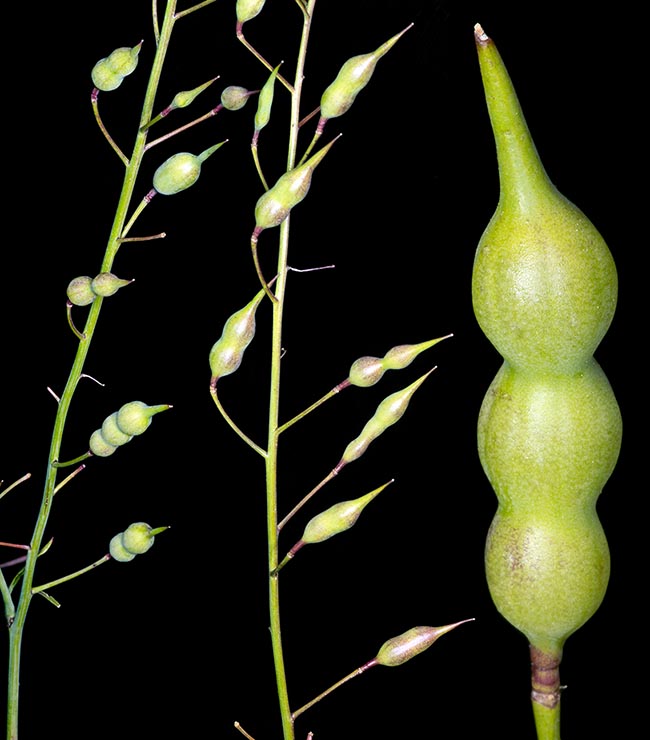 The fruits are indehiscent cylindrical siliquae with several seeds, one per article. These, resistant to many animals’ gastric juices, germinate in spring, but even later, in summer and in autumn, when with the rain the siliquae fallen and buried open themselves and their anti-germinative power stops. There are three subspecies © Giuseppe Mazza

This confirms the importance that the control of the infestants is to be done by promoting, conversely, the use of non-herbicidal techniques.

– Raphanus raphanistrum subsp. rostratus (DC.) Thell. is diffused in Europe and Western Asia and has violet flowers and fruits with long beak, robust, with 2-7 seeds.

– Raphanus raphanistrum subsp. landra (Moretti ex DC.) Bonnier & Layens  is characterized by lirate pinnatisect leaves wih about 6 pairs of spaced lateral segments and reniform terminal segment, with central rachis of violet colour. The cauline leaves are reduced.  The sepals are usually of green-violaceous colour  and the 14-15 mm petals are yellowish or rarely white, tinged with violet with nail as long as the margin. The siliquae are indehiscent, oblong-cylindrical with 3-8 swellings and with a 15-40 mm terminal beak.