The plant is native to Bolivia and Peru, where it grows in rocky areas of the Andean cordillera, characterized by a cool and dry climate in winter and little rainy in summer, at an altitude of about 3.000 m.

The genus is honoured to the French cactus nurseryman, Pierre Rebut (1830-1898); the species is dedicated to the English naturalist Hugh Cuming (1791-1865), with the addition of the Greek prefix “néos” = new, in order to differentiate it from the pre-existing synonym Echinocactus cumingii.

The Rebutia neocumingii (Backeb.) D. R. Hunt (1987) is a very variable plant with usually single, globular or globular-depressed stems, of a frequently pale green colour, of about 10 cm of diameter, tending to become, with the time, almost cylindrical up to 20 cm of height. The stems have tubercles placed on 16-18 spirals with oval and slightly depressed areoles, woolly, provided with 5 to 20 radial thorns, about 1 cm long and 1-8 central thorns long about 2 cm, all of a pale yellow colour with a darker apex.

Usually, the flowers generate from the areoles close to the apex, 1 to 4 for each areola, are diurnal and long-lasting (5-6 days), bell-or funnel-shaped, of about 2 cm of length and 2,5 cm of breadth, with yellow or orange corolla. The fruits are globose, of 6-8 mm of diameter, and contain several ovoid seeds, about 1 mm long, dark brown to black. 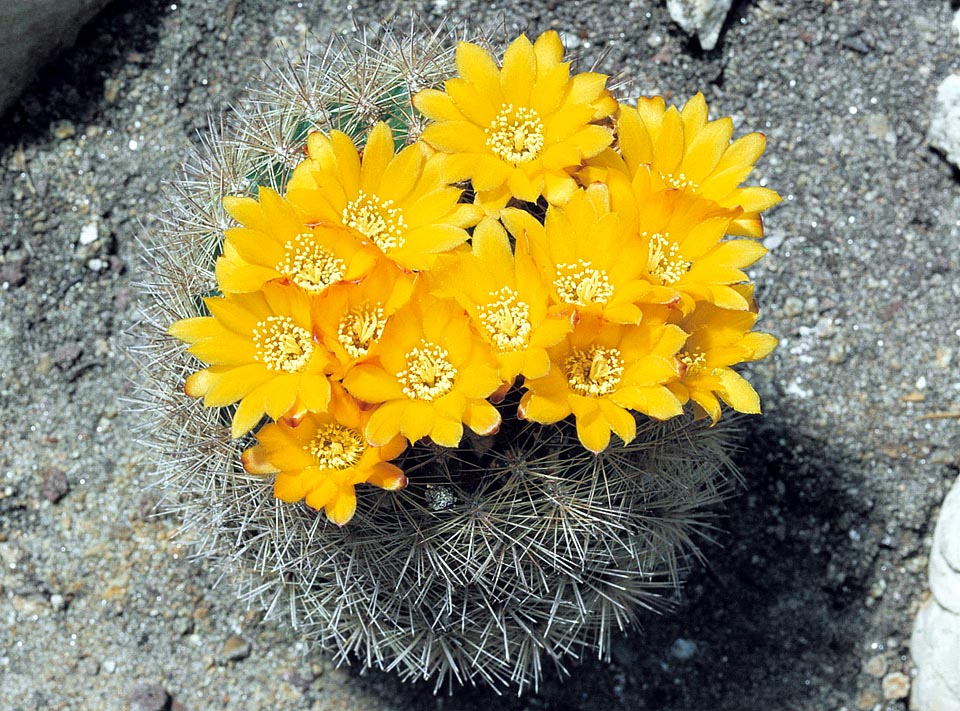 The Rebutia neocumingii is again in bud in full summer, after the early spring blooming © Giuseppe Mazza

It usually reproduces by seed at a temperature of 20-22 °C, seen that it very rarely produces suckers. Much appreciated plant by the collectors due to its early and abundant blooming, but also for the re-flowering as often, in fact, after the spring blooming it will bloom again in summer. It is to be cultivated in full sun or in slight shade on particularly porous or draining moulds, which may be formed, in equal parts, by common fertilized garden earth, coarse sand and crushed dustless stone.

Its collocation in full ground is limited to the situations where it is possible to recreate the particular conditions of origin, but, usually, it is cultivated in pot with the same aforementioned modalities. In summer, during the vegetative period, it is to be regularly watered, but allowing the mould to dry up completely before irrigating again. In winter the watering are to be stopped and even if in an arid environment it can stand for short time temperatures as low as -5 °C, it is to be kept dry, in order to avoid rottenness, at a temperature possibly between +5 and +10 °C; this period of dry and cool rest is quite indispensable for the blooming.

Being easily subject to attacks by the acarids, it is to be regularly surveyed in order to, if necessary, intervene quickly.

Rebutia neocumingii was last modified: May 9th, 2018 by Giuseppe Mazza