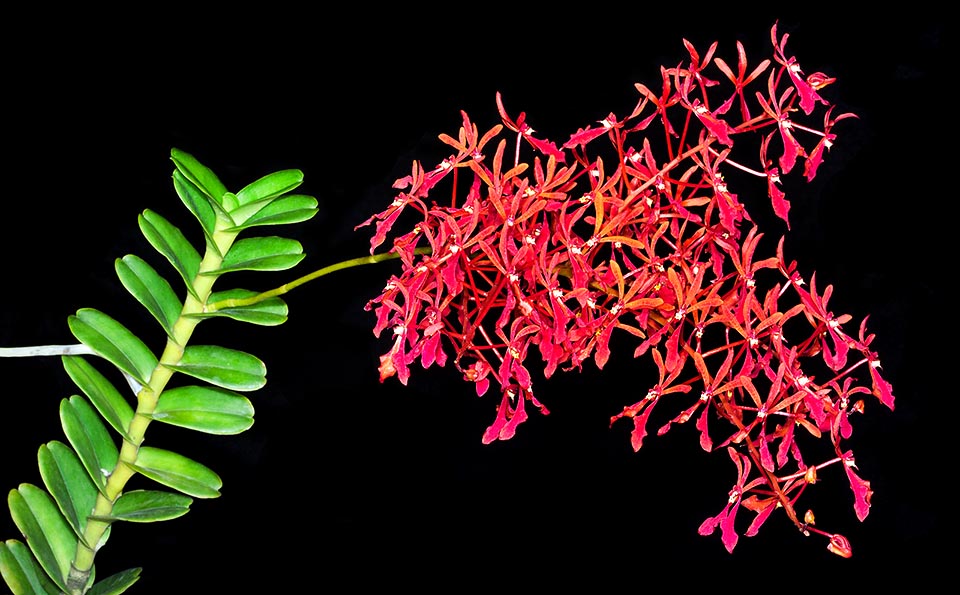 The Renanthera philippinensis is an epiphyte species native to the Philippines where it grows in humid forests or in swampy areas at low altitudes. Erect or semi-drooping stems that can exceed the metre and a half with very showy panicle 60-80 cm inflorescences, opposite to the leaves, tending to arrange horizontally © Giuseppe Mazza

The species is native to the Philippines where it grows in the humid forests or in swampy areas at low altitudes.

The Renanthera philippinensis (Ames & Quisumb.) L.O.Williams (1937) is a monopodial epiphytic species with erect or semi-drooping stems, up to more than 1,5 m long, and alternate leaves, distichous, coriaceous, oblong with bilobed apex, 10-16 cm long and 3,5-4,5 cm broad. Panicle inflorescences opposite to the leaves that tend to arrange themselves horizontally, 60-80 cm long, with a multitude of flowers of 2,5-4 cm of diameter with bright red sepals and petals, with yellow spot ath the base of the labellum and lateral lobes of the labellum of cream colour.

It reproduces by seed, in vitro, and micropropagation. At amateurish level, it may be reproduced by division of the stem with both portions provided of a sufficient number of leaves and roots, the lower part will produce one or more plants with dormant buds that may be removed as soon as they will form their own rooting apparatus. 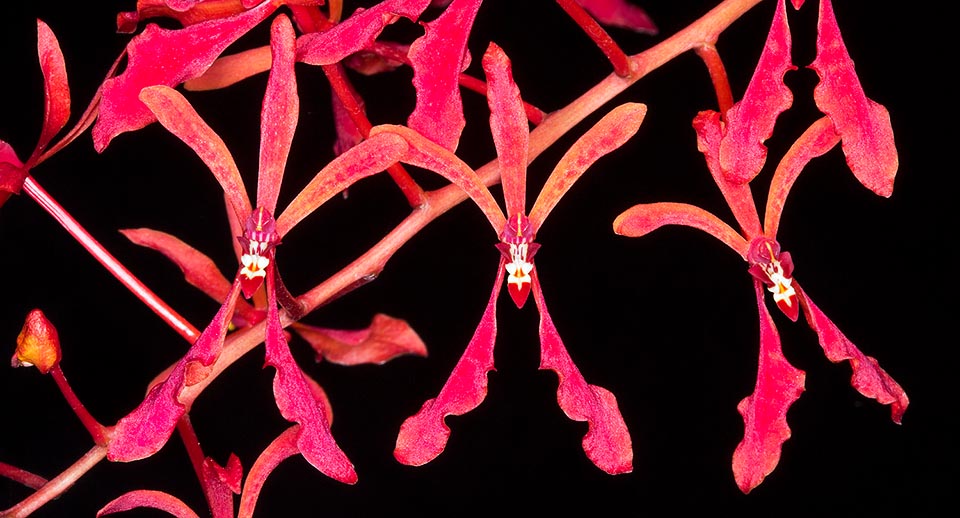 The countless flowers, of 2,5-4 cm of diameter, have bright red sepals and petals, with yellow spot at the base of the labellum with cream lateral lobes © Giuseppe Mazza

Very appreciated species due to the showy blooming that in the origin zone repeats more times during the year, often utilized in the hybridizations due to the intense red colour of the flowers, requires high luminosity, preferably full sun but in the central hours of the day, medium-high temperatures, 20-30 °C, with lowest winter ones not under the 16 °C, high humidity, 75-85%, and constant ventilation. Where the climate does not allow the permanent cultivation in open air, in the coldest months is to be kept in warm-humid greenhouse or anyway in a protected ambient at the maximum possible luminosity. It can be mounted on trunks, bark or rafts of cork or of arborescent ferns or in baskets or pots, preferably in terracotta for a better stability, with bare root or with very aerated and draining substratum formed by earthenware fragments, medium/large sliced bark and charcoal. The bare root plants are to be watered abundantly and frequently, even every day, especially in presence of high temperatures, the others at intervals such as to allow the roots to dry up completely between the waterings, utilizing rain water, demineralized or by reverse osmosis. Fot the fertilizations, every two weeks from spring to autumn, can be utilized a balanced hydrosoluble manure, with microelements, at ¼ the dosage shown on the package. The repottings are to be done when strictly necessary paying attention to damage the least possible the roots that are to be previously wetted in order to render them more flexible.

The species is shown in the appendix II of CITES (species whose trade is internationally ruled).