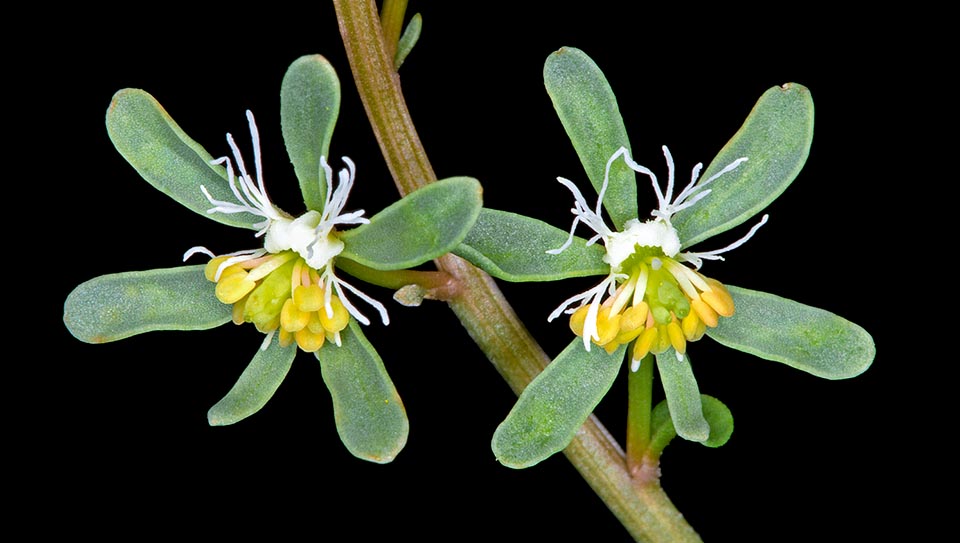 Hidden beauty, Reseda phyteuma has odd 5 mm flowers. Loves arid and particularly sunny places, where the climate is milder, but not torrid. Located on the Mediterranean coasts and spread a little northward, is present in continental Italy, poorly in Calabria and Basilicata. Reaches 1200 m of altitude © Giuseppe Mazza

The family of the Resedaceae, fairly close to the Capparaceae, as well as to the Fabaceae, includes small thermophilic species, therefore adapted for conformation to arid and particularly sunny sites, where the climate is milder, preferably not torrid. 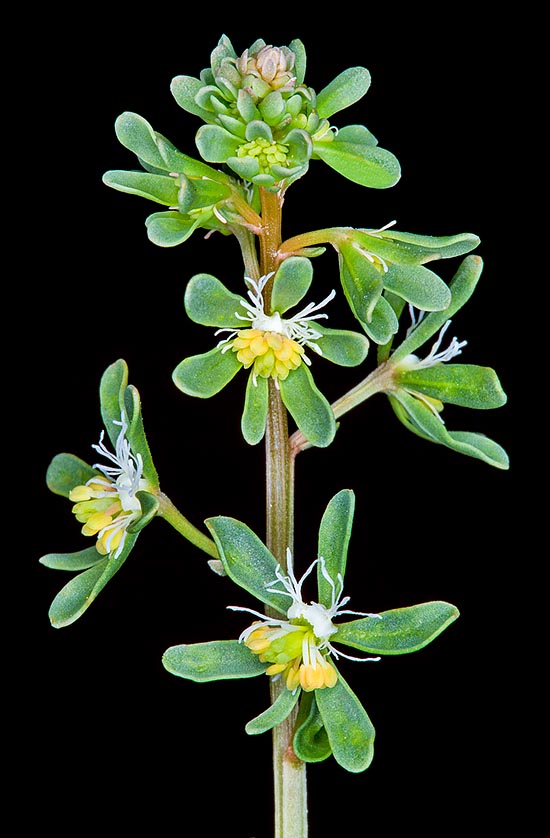 The herbaceous stem can be even 50 cm tall and vegetates April to September. The flowers are fecundated by small solitary hymenopterans having a quite short ligula, so much that they can forage only flowers like these, with little deep corolla © Giuseppe Mazza

Its distribution confirms this, for instance in Italy where, although being considered rare, a little less frequent in Calabria and Basilicata, thrives in all regions, apart Sicily and Sardinia.

Located on the Mediterranean coasts and expanded a little to the north and the east, it may be said a Euro-Mediterranean plant, especially because its range more or less corresponds to that of the olive tree and the vineyard.

Reseda phyteuma L. Sp. PI. (1753) is a wild and modest species, less homaged by gardeners or admirers than its cousins Reseda lutea and Reseda odorata, much more known and perfumed.

Its flowers are odorless or slightly scented. It lives among the vineyards, in the cultivated areas, close to the partition walls, even in the places disturbed by the man and close to the settlements, from the sea level up to 1200 metres.

The flower, up to 5 mm wide, a little weird, displays on the top four petals subdivided in white little stripes, that is uo to nine laciniae, whilst the two lower petals are very narrow.

The whole, stylishly, is merged and carried forward by a long floral axis with six tepals, similar to greenish leaflets.

“Resédo”, I heal, I soothe, is the Latin verb assigned by Linnaeus, that still now corresponds to the generic name of this small plant.

Yore considered an excellent tranquillizer, later on prescribed against tapeworms, and also as a good diuretic and sudorific, was mainly used as anti-inflammatory, especially after bites of stray dogs.

Pharmacological studies about this are presently under way.

Recently, in its lymphatic flow has been ascertained the presence of a glycoside that, while hydrolyzing, should free a sequence similar to mustard, useful for the atonic stomach, increasing its secretion.

Consequently, the name of the species is of no surprise at all. “Phyteuma” comes from the Greek, indicating an implicit suggestion. It would imperatively mean: “which must be planted” and by sure expresses a sense of approval. 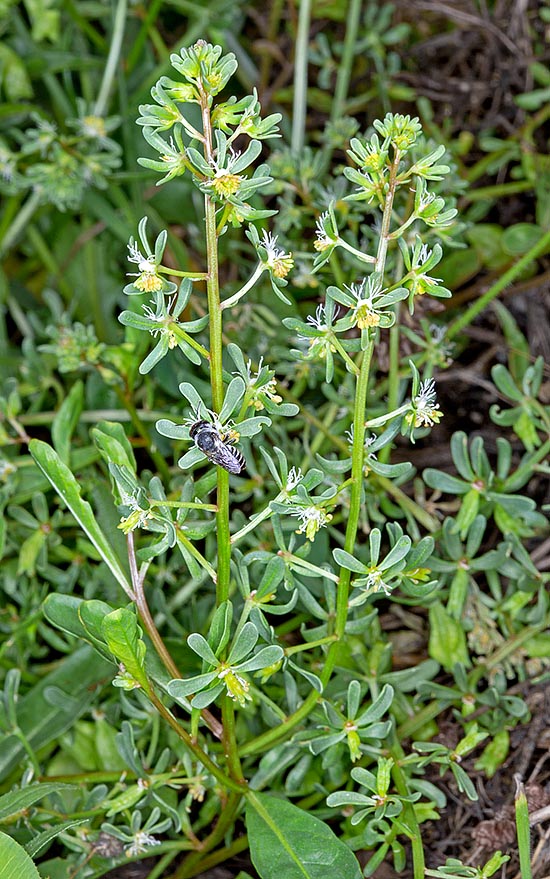 Being a “therophyte” plant, during the bad season preserves itself through its own seeds.

As if not enough, the Reseda phyteuma perpetuates also form of hemicryptophyte, that is via buds resting on the surface, strategically placed at the level of the soil.

The stem, erect, ramified at the base, up to 50 cm tall, has two types of leaves.

The basal ones, somewhat spatulate, up to 10 cm long, are usually entire, whilst the upper ones, slightly dentate, display two fairly neat laciniae.

Also the fruit may be considered as an oddity.

It is a hanging capsule, sacciform, 1,5 cm long at most, a small elegant, keeled, bottle-shaped container, with three teeth on the opening, containing about twenty reniform seeds, flattened on the side.

The blooming time, quite durable, goes from April to September, even October, with the fruits ripening.

The Reseda phyteuma is fecundated by small solitary hymenopterans, belonging to the most primitive families (Colletidae, Melittidae, Andrenidae and Halictidae), that have a fairly short ligula, so much that they can forage only on flowers having a little deep corolla, like, rightly, the Reseda phyteuma ones.

The Colletes marginatus, is the most important pollinator of this plant. From June to mid August it builds a nest at the level of the ground, shaped like a tunnel, with only one entry, where it lays the eggs and breeds its own larvae nourishing them with a mix of pollen and a small part of nectar.

Very often the seeds are dispersed by granivorous species of ants, such as Messor barbarus, the harvesting ant, being attracted by the vegetable fat particles present in them.

Also the fruit looks odd. It’s a pendulous capsule, sacciform, 1,5 cm long at most. Basically a small stylish, keeled, bottle-shaped container with three teeth on the opening, containing a twenty reniform seeds, visible in the right hand enlargement. The spreading is entrusted to granivorous ants like Messor barbarus © Giuseppe Mazza

→ To appreciate the biodiversity within the RESEDACEAE family please click here.

Reseda phyteuma was last modified: May 3rd, 2018 by Giuseppe Mazza