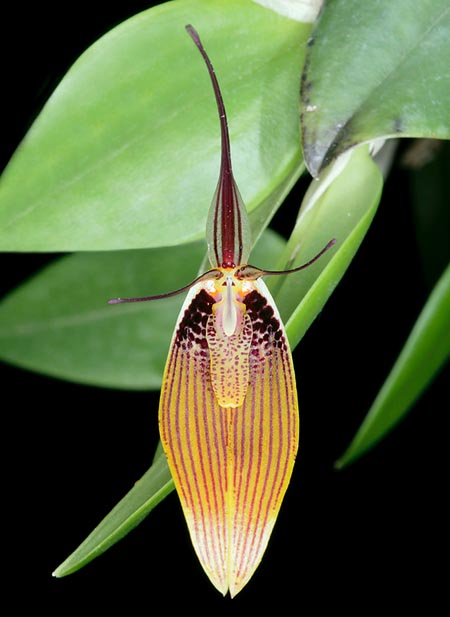 The species is native to Colombia, Ecuador, Peru and Venezuela, where it grows on the trees of the humid forests between the 1800 and the 3000 m of altitude.

The genus is honoured to the Colombian naturalist and politician José Manuel Restrepo Veléz (1781-1863); the name of the species is the combination of the Latin terms “antenna” = antenna and “fero” = to carry, with reference to the petals and to the dorsal sepal resembling to insects antennae.

The Restrepia antennifera Kunth (1816) is an epiphytic caespitose species with short rhizome from which depart erect stems, about 10 cm long and covered by bracts speckled of purple, with one single leaf at the apex, coriaceous, ovate-elliptic, about 5 cm long and 3 cm broad, of dark green colour tending to the violaceous is exposed to intense light.

Inflorescences from the rear of the base of the leaf, 3-8 cm long, produced in succession, carrying one single flower with whitish dorsal sepal with purple longitudinal striae, 2-3 cm long and 0,3 cm broad at the base, tapered and ending in a small swelling similar to a drop, lateral sepals united almost up to the apex, 2,5 cm long and 0,6 cm broad, of a white to brown yellow colour with purple longitudinal striae, petals similar to the dorsal sepal, but narrower, filiform, trilobed labellum, 1 cm long and 0,3 cm broad, with almost rectangular median lobe; the flowers last from 5 to 12 days.

It reproduces by seed, in vitro, and by division, with each section provided with at least 3-4 tufts, and through the young plants which at times it produces at the base of the leaves (in jargon, “keiki”, which, in Hawaiian means “sons”), which can be removed when they have formed a good radical apparatus; young plants can be obtained also from a 2-6 cm portion of stem, inserted in sphagnum kept humid up to the base of the leaf, from which, after some months a new plant well be produced.

Miniature orchid where the most conspicuous part of the flower are the sepals almost entirely united, it is the most cultivated of the genus also for the facility of reproduction and the fast growth, it forms in short time compact flowered tufts for much of the year.

It requires a semi-shaded position, cool temperatures, 10-15 °C by night, 18-26 °C by day, even if it can stand extreme temperatures differing of some degrees for a short time, constant and high humidity, 60-80%, and a good ventilation. The waterings are to be distributed with regularity, as it does not have a precise resting period, only a slight reduction in winter, but without allowing to completely dry up. It does not stand salts accumulation at the roots; for the waterings and the nebulisations the rain water is therefore to be utilized, or water obtained by reverse osmosis or demineralised, and the fertilizations, with hydro-soluble balanced products, with microelements, are to be done at ¼ or less of the dosage suggested on the package, distributed and alternated in way to wash away the remaining salts.

It can be mounted on bark, raft of cork or of arborescent fern, with a little of sphagnum at the base for keeping the humidity, or cultivated in pot with a compost which may be formed by finely sliced bark fragments and charcoal, with, if necessary, addition of sphagnum and agriperlite.