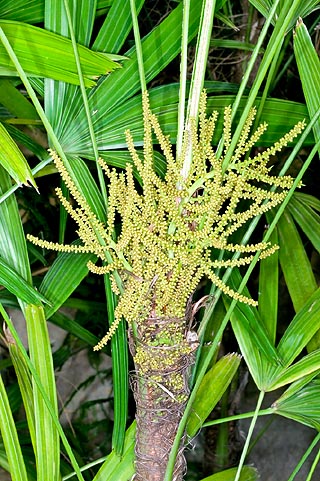 The Rhapis excelsa (Thunb.) A. Henry ex Rehder (1930) is native to the forests of southern China and of northern Vietnam.

The name of the genus comes from the Greek “rhapis” = needle, small rod, with possible reference to the thin stems; the species name comes from the Latin “excelsa” = tall.

It forms thick bushes of thin stems tall two and even more metres (the cultivated varieties do not usually overcome the 1,5 metres), with a diameter of about 3 cm, covered by a thick weave of dark brown fibres. Leaves palmate, about 35 cm wide, deeply incised; the segments, usually, from 5 to 9, are 4-7 cm wide, and have truncate and indented extremity.

Dioecious plant (each individual carries only male or female flowers), it produces small, very ramified, inflorescences between the leaves; the fruits are ovoid, white when ripe, of about 7 mm of diameter. The seeds germinate in 4-5 months, but the plant is usually reproduced by division.

Due to its reduced size and the ease with which it grows in pot, also in shady locations, it has had a remarkable success, particularly in North Europe, in the decoration of interiors, since the end of the eighteenth century. Several variegated forms do exist, mostly selected in Japan, where they are extremely popular.

As garden plant, it does not have particular exigencies of soil and, when adult, it bears also short drought periods, and even if tolerating the full sun, it grows better in a semi-shaded position. With regard to its behaviour at low temperatures, the leaves begin to deteriorate at around -4 °C, whilst the whole aerial part dies at around -6/-7 °C, but often does vegetate anew from the foot.