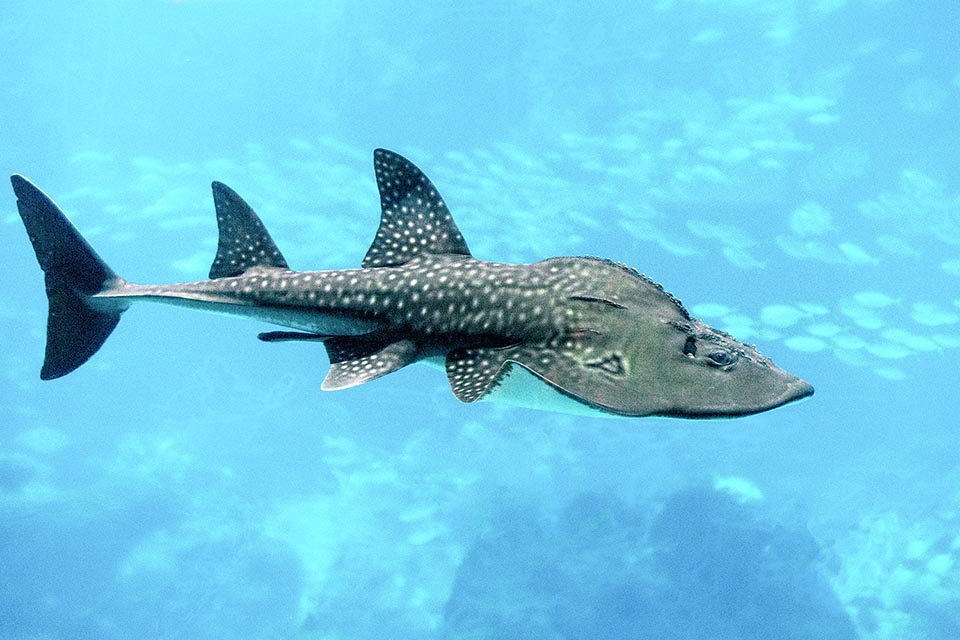 Rhina ancylostoma male. Morphologically mid-way between rays and sharks, is an endangered species despite its vast area in tropical Indo-Pacific © Giuseppe Mazza

The Rhina ancylostoma Bloch & Schneider, 1801 belongs to the class of the  Chondrichthyes, the cartilaginous fishes, to the order of the  Rhinopristiformes and to the family of the  Rhinidae, that groups species having intermediate characteristics between the rays and the sharks collocated in 3 genera:  Rhina, Rhynchobatus and  Rhynchorhina.

Conversely, after others, it is a Rajiformes to be inserted in the family of the Rhinobatidae, the one of the guitar or violin fishes, or of the Rajidae, that of the rays.

The name of the genus Rhina comes from the Greek “ῥῑνο” (rhino) = nose, with reference to the unusual profile of the snout, whilst the species ancylostoma comes, always in Greek, from “ἀγκύλος” (ankylos) = curved, and “στόμα” (stoma)  = mouth, due to the half-moon shape of the latter. 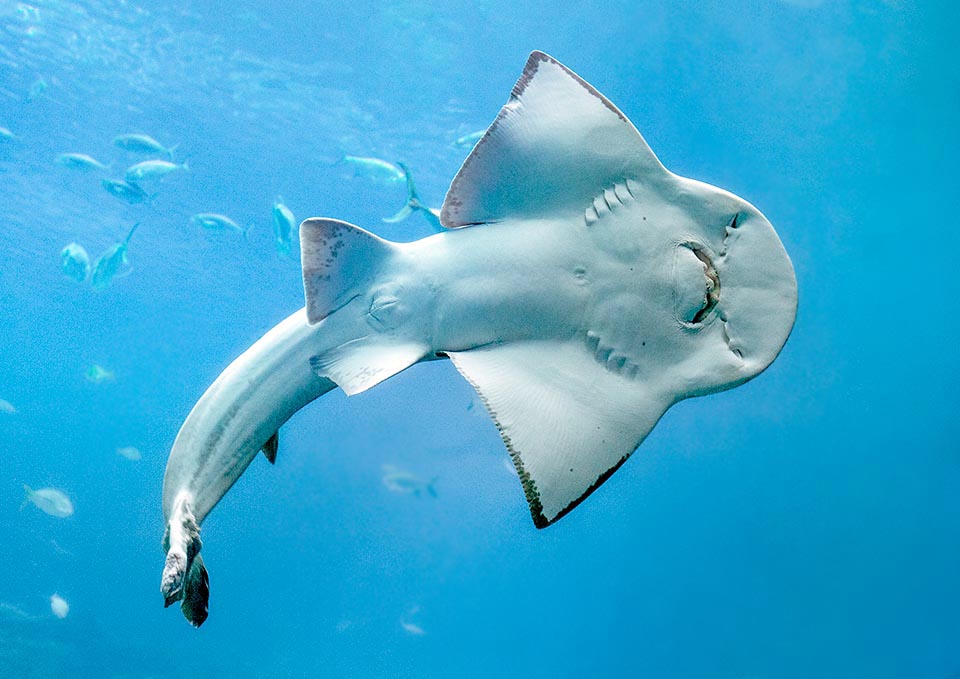 Female seen ventrally. The half-moon mouth has no teeth as sharp as the sharks, but 97 rows of flat and wrinkled teeth to crush preys © Giuseppe Mazza

Although rare and under risk of extinction, the Rhina ancylostoma has a very vast distribution area in the Indo-Pacific. We find it in the Red Sea and in the Persian Gulf up to South Africa and then, indicatively, in the Seychelles, Mauritius and Maldives Islands. Eastwards, it has colonized the coasts of India, Sri Lanka, Thailand, Malaysia, Indonesia, Papua New Guinea, Australia and New Caledonia, which marks the easternmost limit of the species. Northwards, it is present in the waters of Vietnam, Philippines, Taiwan, Korea and of southern Japan.

It is mainly a nocturnal fish, moving like the sharks with flicks of the tail. It swims, not far from the bottom, even in 3 m of depth, on rocky or madreporic sandy coasts, but usually never goes down under the 90 m. 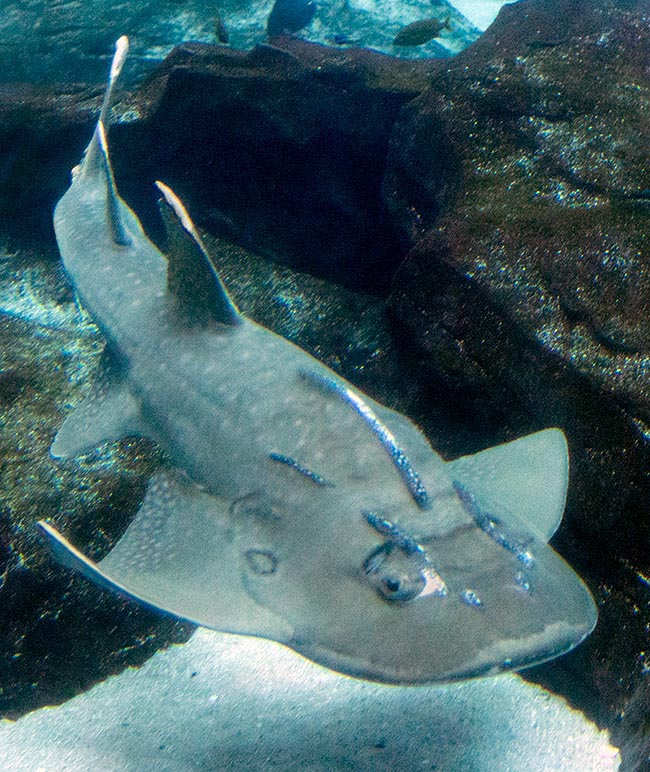 Solid spines protect the eyes and the mouth. The genus name draws attention to the snout rounded profile © Giuseppe Mazza

The head is short and wide, flat, with an unmistakable rounded snout. The eyes, well distinct from the body, are protected by solid fins, present also on the back and on the sides, close to the pectorals.

The mouth, arcuate, is located on the ventral side, just after the two big nostrils.

The jaws, with three interlocking lobes, have 47 rows of teeth above and 50 below. They are not as sharp as those of the sharks, but, conversely, are flat and wrinkled for crushing the prey: benthic fishes, crustaceans and mollusks that the Rhina ancylostoma immobilizes on the bottom, landing with all its weight, an conveys to the mouth with rapid movements. No shell or carapace may resist this highly effective chopper.

Like in the rays, the gill slits open on the lower whitish face. They are 5 per side, close to the pectorals, and draw almost a circle with the profile of the snout.

The livery of the back tends to be brown, or bluish grey, with clear dotting, present also on the fins, and dark drawings appearing more marked in the young. Characteristic is the black pattern, edged in white at the base of the pectoral fins, that remains, though faded, in the adults, whilst the pale dots, while growing, get smaller.

With its varied diet, Rhina ancylostoma has no major feeding problems and in fact it is a fish adapting in captivity in the large pools of the big oceanic aquaria, where it has repeatedly reproduced. 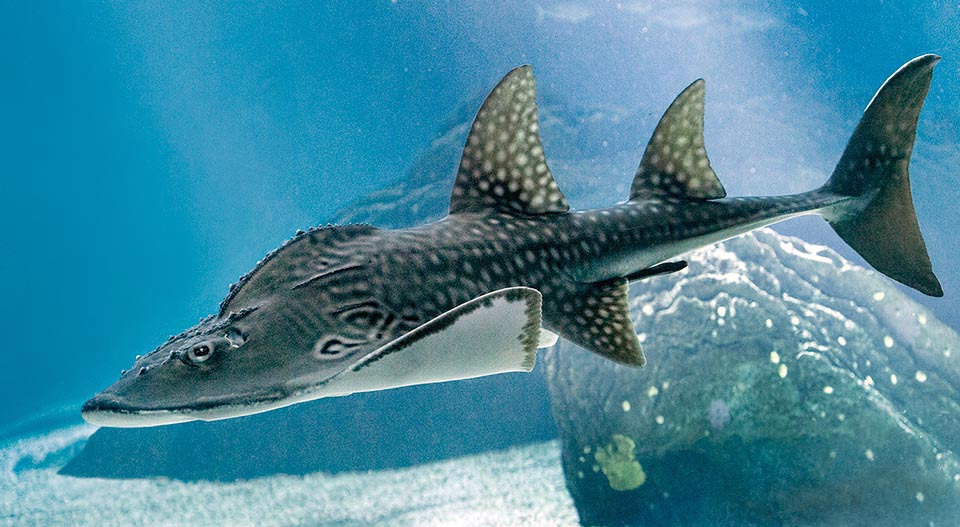 It is an ovoviviparous species with inner fecundation.

The females, bigger than the males, get sexually mature only starting from the 180 cm of length. They can generate even 15 kids, but usually their number varies from 4 to 18 with a minimum of 2. Initially, they nourish of the yolk and then, growing, by absorbing fat and proteins from the uterine fluid. Upon birth, they measure about 45 cm.

In nature, the Rhina ancylostoma is predated mainly by the Tiger shark (Galeocerdo cuvier) but the greatest danger stands in the trawling that often does not leave the females time to grow up and reproduce. In order not to cause damage to the nets, the fishermen cut the fins to the ill-fated, as they are the only part that can be sold for the fish soup, thus condemning them to certain death.

The resilience is extremely low, as are needed more than 14 years for doubling the number decimated by the events, and consequently the vulnerability index, very high, marks already 75 on a scale of 100.