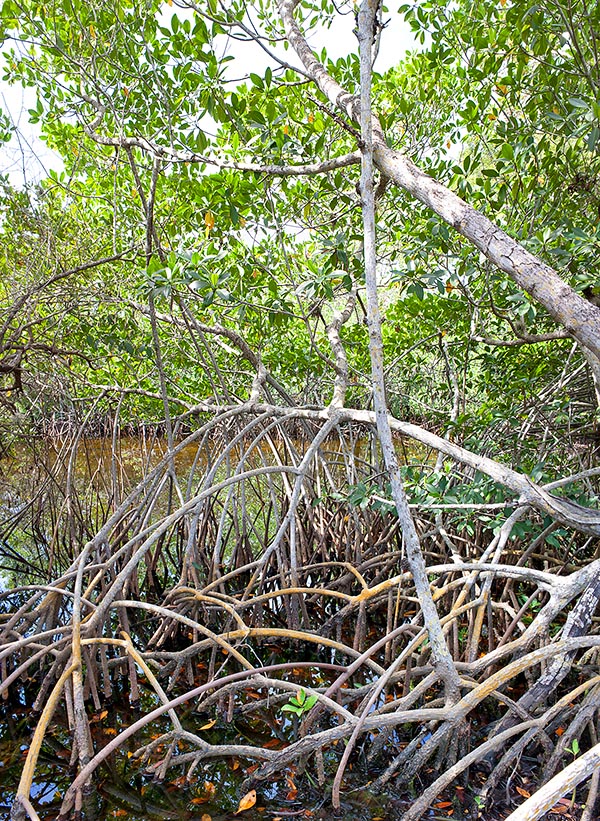 The name of the genus is the combination of the Greek terms “rhiza” = root and “phero” = to carry, with reference to the numerous aerial roots sustaining the stems; the name of the species is the Spanish one of the plant, in its turn coming from the one utilized by the natives of the Caribbean area.

The Rhizophora mangle L. (1753) is a shrub or small evergreen tree 3-10 m tall, with erect and cylindrical stem of 10-30 cm of diameter, even if, in some instances, it may exceed the 25 m of height, with smooth and brown-reddish bark, sustained by numerous, intricate and arcuate reddish aerial roots resembling to stilts, simple or ramified, which depart from the lower part of the stem and from the low branches and which may extend up to more than 2 m.

The aerial roots, besides the anchoring function, have also the function of oxygenating the part of root immersed into the sediment by means of particular structures of lenticular shape (“lenticels”) which ensure the gassy exchanges with the exterior and which open and close depending on the level of the tide.

The leaves are opposite, simple, from elliptic to obovate, thick and coriaceous, 5-15 cm long and 3-8 cm broad, with slightly curved entire margin, of glossy intense green colour on the upper page, yellowish green below, grouped at the extremity of the branches. 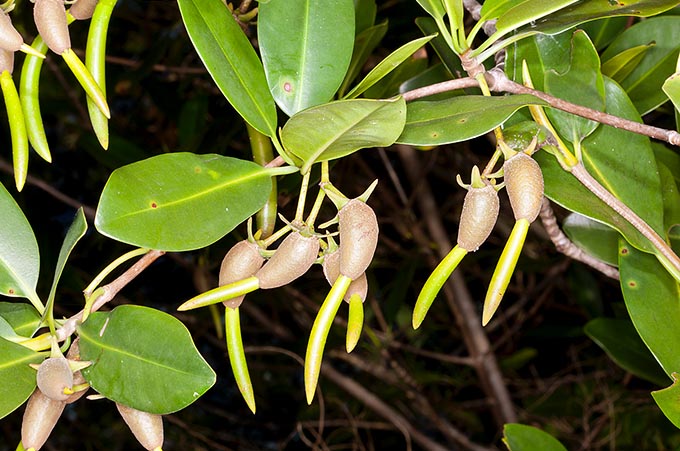 It's a viviparous species. The fruits develop on the plant with pointed 15-30 cm propagula © Giuseppe Mazza

Axillary inflorescences, on a 4-7 cm long peduncle, usually formed by 2-4 hermaphrodite flowers with campanulate calyx with 4 lobes of yellowish green colour, corolla with 4 linear-lanceolate petals, 0,7-1,2 cm long and 0,4 cm broad, of colour going from white to pale yellow and hairy at the margins, and 8 stamina.

It is a viviparous species, the fruits are brown-greenish, conical berries, 1,5-2,5 cm containing one seed only which germinates on the plant, forming, in 8-12 months from the fecundation an hypocotyl with an embryonic root (propagulum), 15-30 cm long, before detaching for settling in the muddy bottom or being transported by the currents or the tides, as it can survive, floating, up to 12 months before finding a situation of shallow and calm waters favourable to the anchorage.

Flowering and fructification occur during the whole year. It reproduces through the propagula inserted in the clayey and silt substratum for a depth of no more than 7 cm and wit a maximum water level of 20 cm, they do not need salt water for their development, even if this can limit the attack of pathogenic agents; the first flowering takes place between the 4 and the 6 years of age.

Tropical and subtropical climate species, it grows, roughly, between the north and south 28th parallels, being the temperature the limiting factor, long lasting values close to 0 °C are fatal. 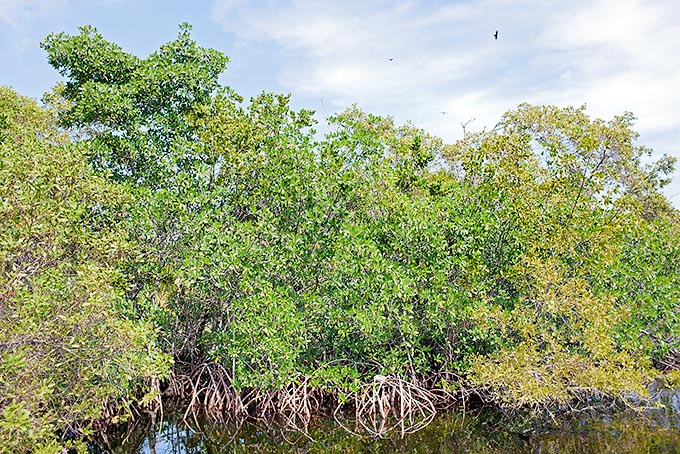 It requires full sun and can live in freshwaters as well as in those with saltiness up to the 90‰ (the sea water is approximately 35‰), even if the optimal interval of saltiness stands between the 8 and the 26‰; among the mangroves it’s the species which may grow in conditions of major immersion of the soil and of saltiness, and for this reason it is considered as a pioneer plant in the shore-sea transition zone.

The mangroves ecosystem, where often the Rhizophora mangle is the dominant species, plays a notoriously important role in protecting the coasts from the erosion during the storms, by acting as accumulation point of the sediments, offering a favourable environment for the fauna in general and in particular, for the reproduction of numerous species of fishes and of crustaceans, the decaying leaves, in fact, furnish substratum and aliment for several micro-organisms which belong to their food chain.

The wood has a high density, between 830 and 1100 kg/m3 depending on the minor or major contents of humidity, and is variously utilized in the constructions, for country style furniture and for producing charcoal of excellent quality. The bark is source of tannin (15-35% of its dry weight) locally used in the colorants and in the traditional medicine.

The Rhizophora mangle is the emblematic tree of the Venezuelan state of the Delta Amacuro.

→ To appreciate the biodiversity within RHIZOPHORACEAE family please click here.