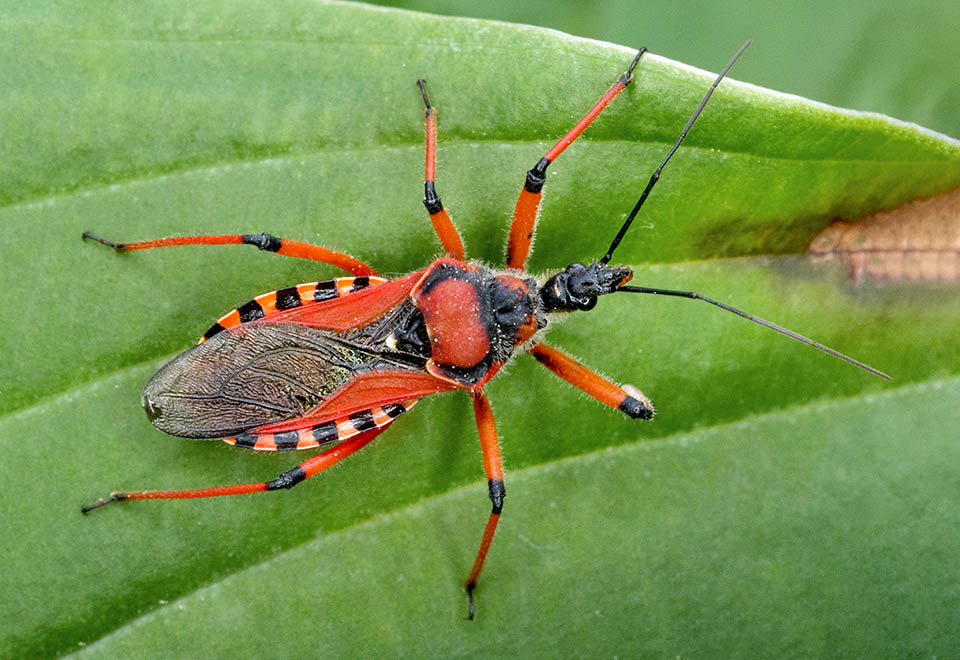 Known as Assassin bug, Rhynocoris iracundus (Poda,1761) is one of the 7000 species, usually predators, of the family Reduviidae.

The body, slender and depressed of these insects, with inconspicuous colours or with red tones, is 2-4 cm long.

The head is relatively small with long antennae of four articles and bug compound eyes. The lower lip, or rostrum, is short and robust, composed of three articles. 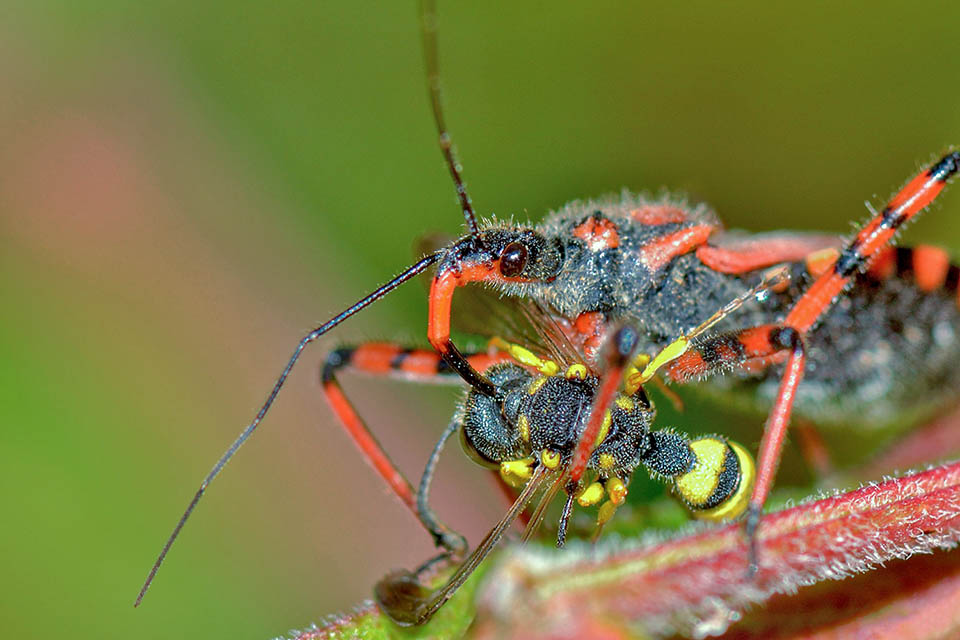 It catches mainly the medium sized insects that land on the flowers; here it has just killed with its robust rostrum a Sphecid of the genus Cerceris © Jesus Tizon

The first segment of the thorax is developed and has below (prosternum) a knurled area on which is rubbed the distal part of the rostrum.

In some species the wings are reduced or are absent. The forelegs have a raptatory function; the middle and the hind ones are ambulatory.

The dorsal part of the abdomen segments (paratergite) is expanded. It protrudes laterally from the wings and at times is ornate with transversal bands in a lively contrast of colours. 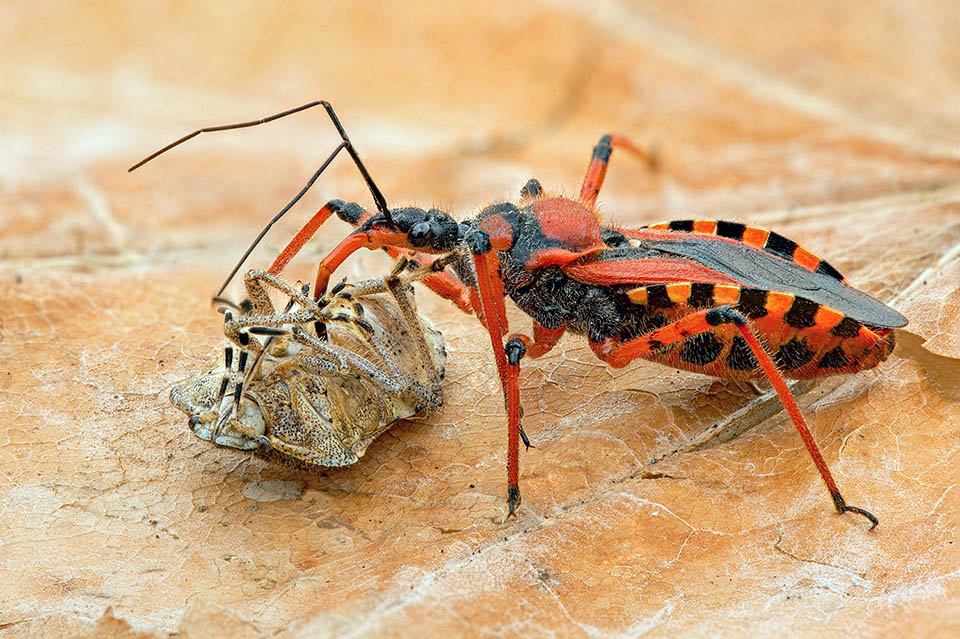 Moreover, it reduces the number of the harmful Bugs of the plants. It injects them a saliva rich in enzyme and then sucks the liquefied tissues © Libor Kubat

The bites of some species of Central America, transmit to man the Chagas disease, or American trypanosomiasis, a parasitic disease caused by the zooflagellate Tripanosoma cruzi  that may manifest itself with heart failure, dilation of the esophagus or of the colon.

Described by Poda as Cimex iracundus has been transferred to the genus Rhynocoris, created by Hahn in 1834, that includes more than 120 species predators of insects. The name of the new genus originated from “μυκτήρ” (rhyno), nose and “κόρις” (coris), bug, with reference to the stinging rostrum of these bugs, whilst the specific term iracundus, irascible, irritable in Latin, refers to the threatening attitude taken noisily by these insects when disturbed. 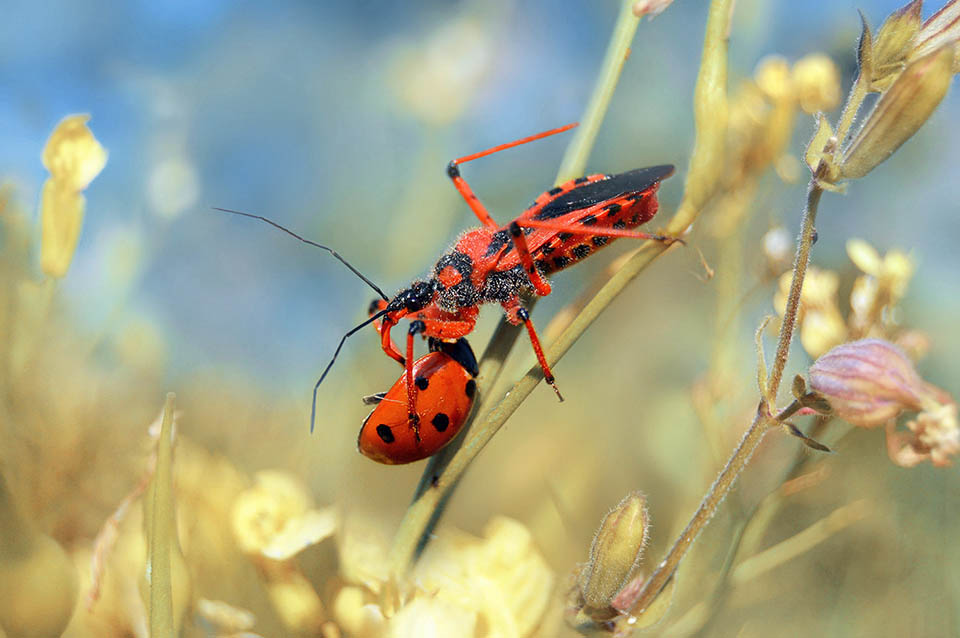 The poor Ladybug, useful aphids eater, doesn’t have better fate: protected on the back by robust elytra, is put upside down and pierced in belly © Vandenberghe Clementine

Rhynocoris iracundus is reported all over Europe and in the Middle East.

It is frequent in various agricultural ecosystems and in anthropized environments on numerous herbaceous, shrubby and arboreal plants, where it predates spiders, insects useful or harmful to the spontaneous and cultivated plants. 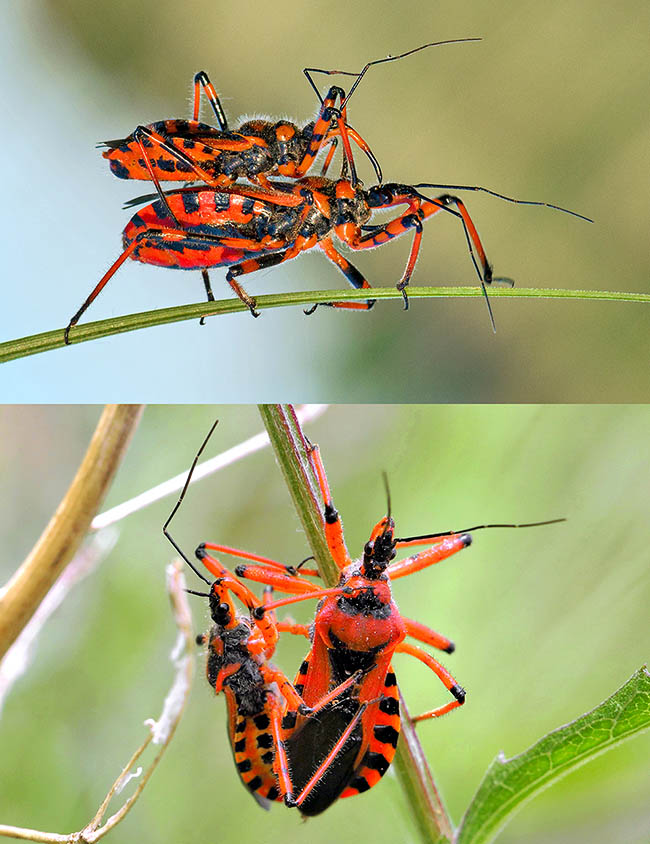 Found a female, the male goes on its back waiting for this one to be available for mating. It is smaller and during the copula it can transport it in less exposed locations of the plant © Ennio Borgato (top) and © el.gritche (below)

The most frequent preys, easy to catch, are the larvae of the Lepidopterans.

They are seized with the raptatory legs and consumed on the spot as happens for the numerous Coleopterans, Hymenopterans, Apoideans and other insects frequent on the flowers.

The tegument of the victims is holed by the robust lower lip equipped with stilettoes that inject a saliva rich in digestive enzymes that allow then the Assassin bug to suck quietly, liquefied, the tissues of the prey.

The females, averagely 15 mm long and about 6 mm wide, are bigger than the males.

The head is relatively small with the lower lip, called rostrum, hardened and capable of stinging. Of the three articles forming it, the first and the base of the second are red.

The individuals manifest their degree of agitation rubbing the apex of the rostrum along a groove situated under the head that produces a warning sound.

The antennae are black, averagely long. The compound eyes are large.

The legs are long, equally red with black bands.

The forewings, called hemelytras, are partially sclerified, with the first part, the red corium, followed by the clavus and by a dark membrane. The hind wings are equally membranous and smoky.

The egg, testaceous brown, has a long oval shape narrower at the upper pole where stands a sort of spongy plug of whitish colour.

The eggs are laid in small groups and the female sticks them on the upper pagina of the leaves. 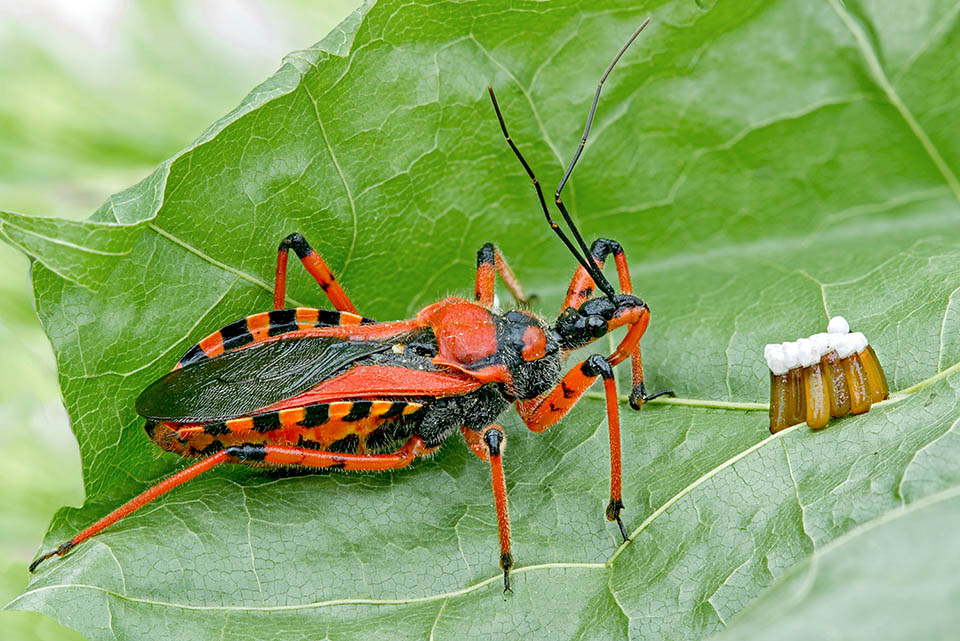 The just born neanids are yellowish, whilst those of second age have the head and thorax of orange red colour with black pigmented abdomen.

The nymphs, equipped with alar outlines, have the orange red colouration of the adults with black spots.

The species, when adult, spends the winter in various shelters. 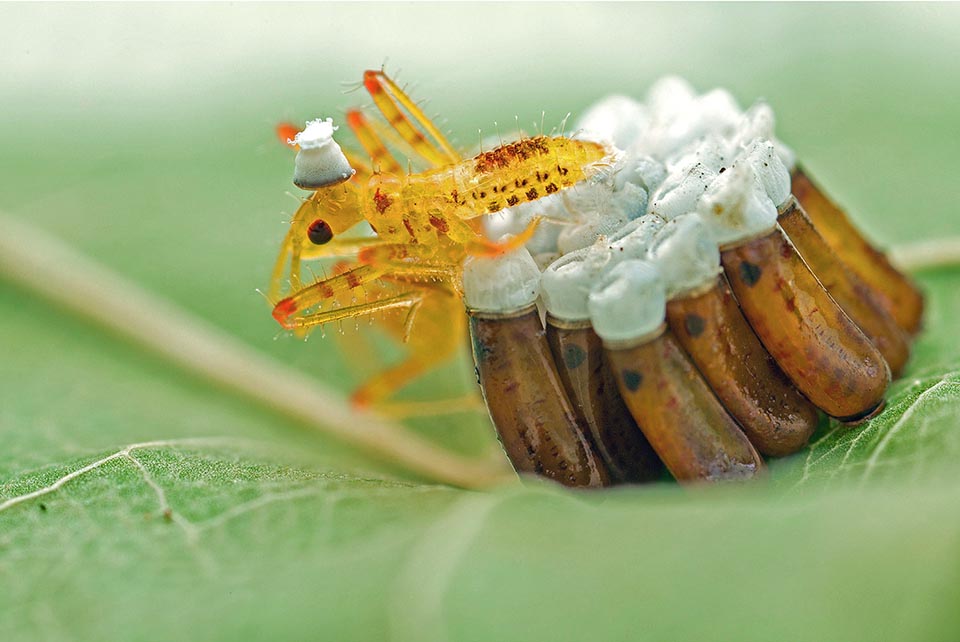 In spring, with the increase of the temperatures the survivors move on the plants, preferably in bloom, and start their predatory activity.

Starting from June, once the gonads are mature, the males go looking for partners.

The courting begins mounting on the back of the females where they stay for some time. Then, if these are available, the mating takes place. After a few days, the female lays 50 to 60 eggs in compact groups. 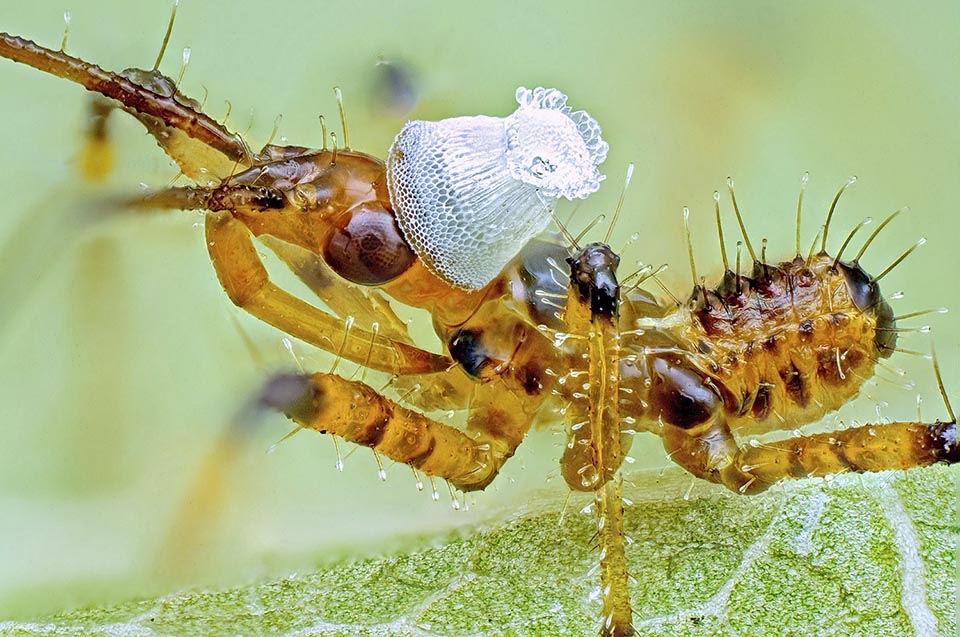 The plug can get stuck on the head for the whole duration of the first stage. It will remain stuck to the old exuvia upon the moult © Libor Kubat

Hatching occurs almost at the same time after about one week.

The juvenile stages keep together for a short time close to the empty shells (chorions). Then, they disperse on the vegetation looking for preys that initially are of small dimensions (aphids, thysanopterans, leafhoppers) and then get gradually larger.

The development completes during the summer and autumn. Before winter, after a short time of activity, the new adults go looking for shelters where to spend the cold season. 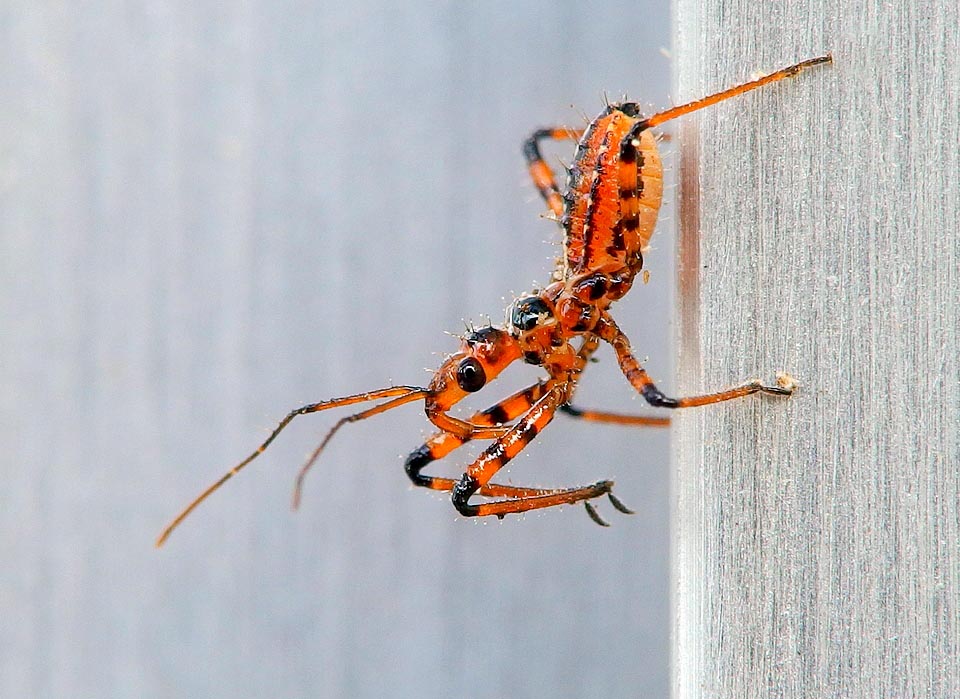 Neanid in a later growth stage. With the moult it has lost the plug and is getting the typical red colouring © dEgOiRo 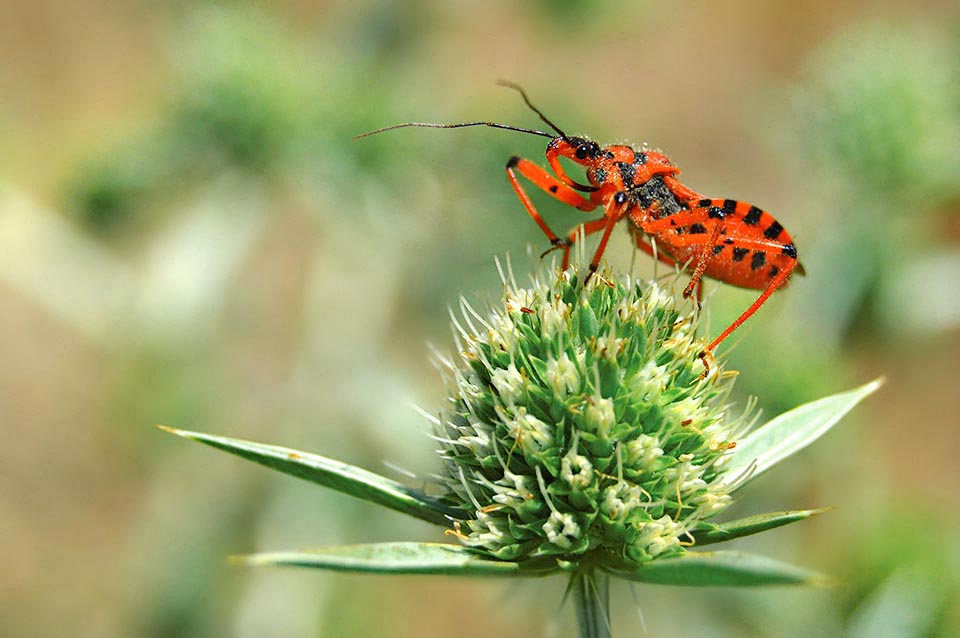 The nymphs, recognizable by the presence of the external wing sketches, have a solitary behaviour and stay long in ambush on the inflorescences waiting for preys © Vandenberghe Clementine

Accidentally, and only if harassed, the Assassin bug can even sting the human skin causing intense pain and a skin erythema that clears up in a few hours. However, it does not transmit the terrible disease of the American species.

Despite the screeching threat and the aposematic colouration that recalls with its unmistakable red and black drawing the presence of the piercing rostrum, Rhynocoris iracundus is actively predated by big spiders, mantises, rodents and birds.

→ To appreciate the biodiversity within the HEMIPTERANS please click here.