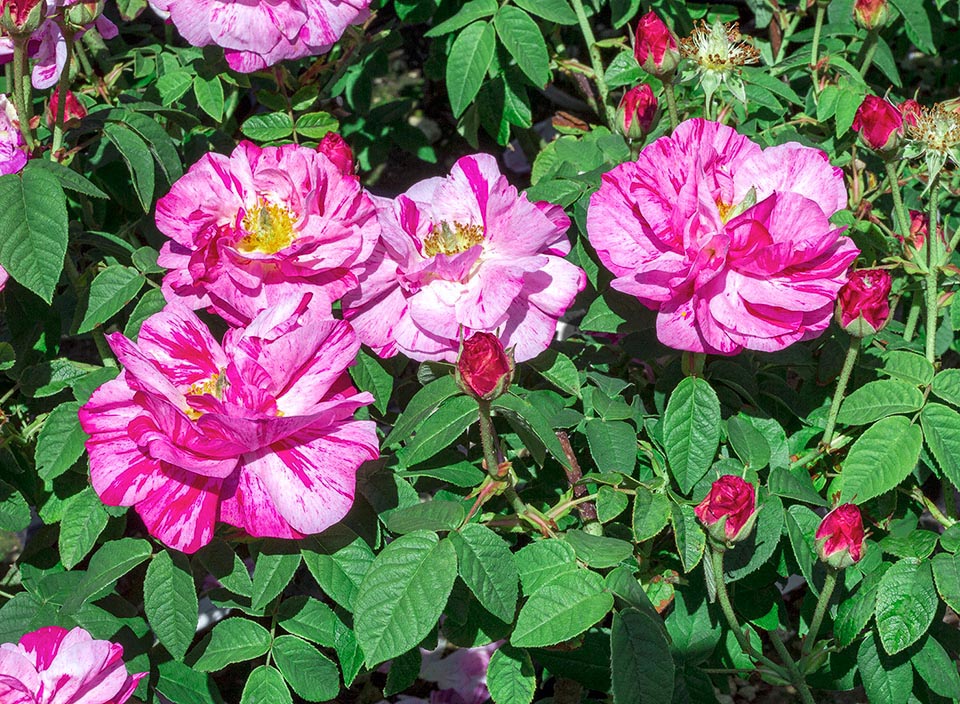 The time and the place of origin are unknown: it is handed down that it has been brought to European by a crusader in the Middle Ages and that in the seventeenth century it has been found, in Norfolk, as a mutation of the common red rose. 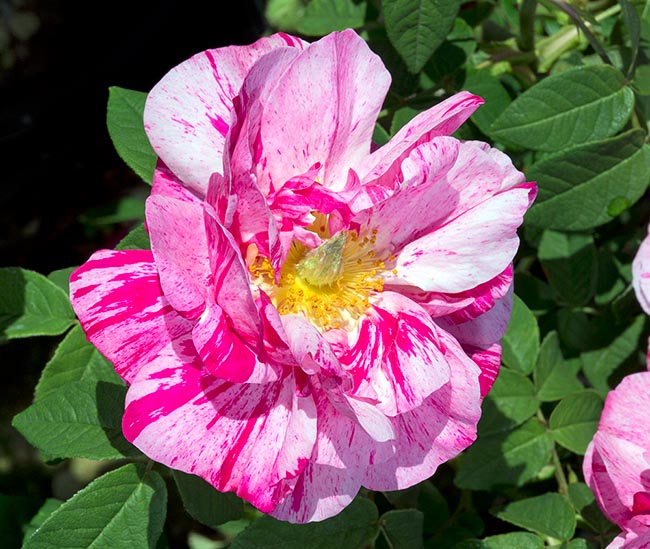 The typical corolla of this flower is initially globular, semi double and pleasantly scented, with dotted petals, striped, sprinkled and listed of white and intense pink with crimson shades on a more or less vast hem part © G. Mazza

It is considered a sport (mutation) of Rosa gallica var. officinalis Thory.

In the literature is also mentioned a consimilar white simple flower.

Rosa gallica ‘Rosa Mundi’ has a posture ‘more graceful’ than the ‘mother’ of which keeps the restrained height and the shape of the flowers: erect shrub, tall and about 125 cm broad; leaves with (3-5)-7 oblong oval leaflets of more or less clear cinnabar green colour, pubescent in the lowest pagina; highly unequal prickles, strong to inoffensive; bristly peduncles and petioles; initially globular corolla, semi double and pleasantly scented; petals differently pigmented with white and intense pink with touches of crimson (spotted, striped, sprinkled and listed for a more or less expanded part of the hem).

At times it displays crimson red flowers. The fact that it may occasionally regress in the blooming, showing features equal to those of Rosa gallica var. officinalis, is a confirmation of its origin as sport.

It is assumed that its look can differ if cultivated ungrafted or grafted and that, also, the type of rootstock has its own conditioning function. It presents only one blooming between spring and summer, depending on the climate. It has been used in hybridization practices for obtaining other variegated roses.

Between the varieties and forms of Rosa gallica (the ‘roses rouges’) cultivated with ornamental or pharmaceutical purpose Rosa gallica var. versicolor is one of the most appreciated due to its large semi double and polychrome flower. The other historical ‘versicolor’, the Rosa damascena f. versicolor (Weston) Rehder or York and Lancaster rose, with which it was mistaken in the past, differs because of the green grey colour of the leaves, the inflorescence richer in flowers, the elongated and not globose shape of the hypanthium and the shade of the corallae that is usually white-pinkish. 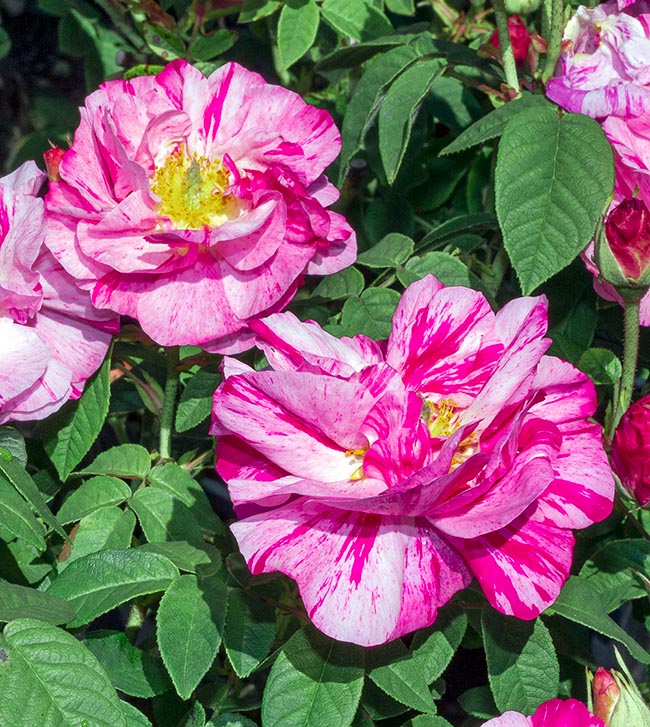 Contained height and only one spring or summer blooming, depending on climate © Giuseppe Mazza

These morphological and chromatic differences are put well in evidence in Pierre-Joseph Redouté watercolours; in Les roses (1817-24)  the two images and their description made by Claude-Antoine Thory have been inserted one after the other, as in a deliberate comparison.

Secure feedback about the presence of Rosa gallica var. versicolor in Europe date from the end of the XVI century, however the tradition wants to relate the name ‘Rosa Mundi’ to a certain medieval Rosamunde (the queen of the Lombards or to the King Henry II of England mistress) thus locating it as antecedent to the documented news and representations.

The several iconographies, descriptions and certificates of appreciation, given to it, do certify the favour this rose has encountered through the centuries despite the change in the taste for the garden decorations.

Charles de l’Ecluse (Carolus Clusius, Carlo Clusio), had already heard of it, before the publication of his Rariorum plantarum historia printed in 1601.

Basilius Besler presents it as Rosa praenestina variegata in the engravings of the figuration herbarium Hortus Eystettensis printed in 1613.

Bartolomeo Bimbi represents it in his painting Ghirlanda di fiori diversi con due rondini (Garland of different flowers with two swallows), 1690-1695 ca., Museum of the Still Life in Poggio a Caiano, Prato.

Mary Lawrance engraves it on copper for A collection of roses from nature (1796-1799), indicating its as Rosa gallica β versicolor and Rosa Mundi.

The Royal Horticultural Society granted it the Award of Garden Merit in 1993. The World Federation of Rose Societies inserted it in the list of WFRS Old Rose Hall of Fame in 2009, acknowledging the favour of the public and the historical importance. The uninterrupted popularity of which it has enjoyed and still enjoys is confirmed also by the several acknowledgements obtained in 2000 and in 2001.