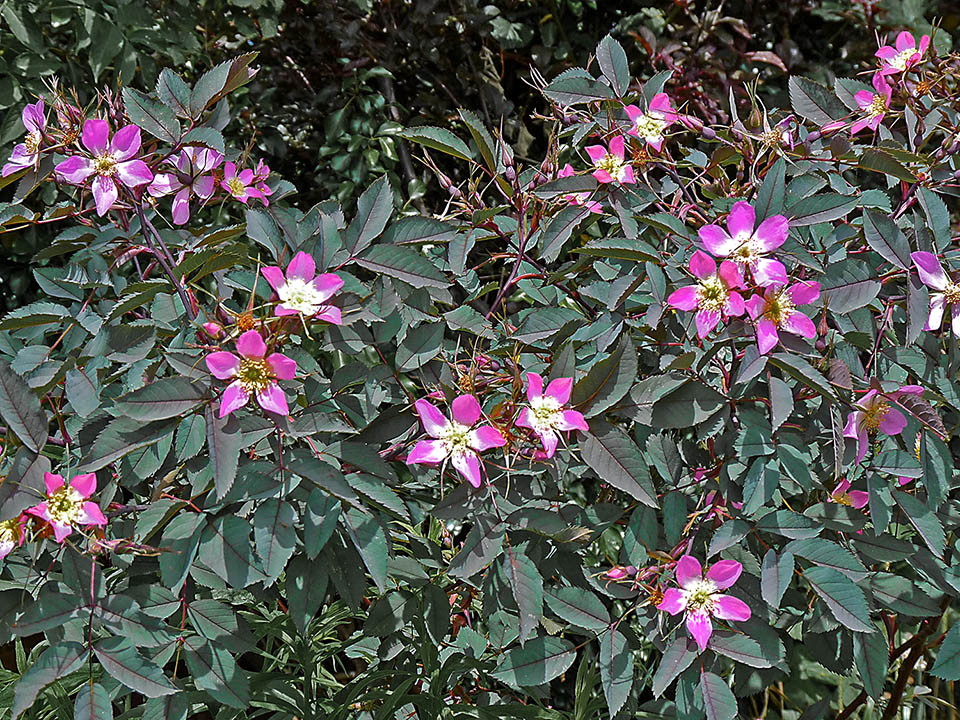 Blossoming from June to August, Rosa glauca is a rustic and decorative shrub (1-3 m tall), with leaves shaded of purple when young © Hornbeam Arts

A botanical description of Rosa glauca, despite the necessary use of qualifying adjectives, cannot represent a rose that has the specific epithet of glauca and, among the synonyms, those of rubrifolia, ferruginea, rubicunda and livida. This rose is charming, peculiar as it presents itself and not for one single morphological feature even if, each one of them is remarkable.

In the bulkiness of the leaves with unusual colours, the small short-lasting flowers appear wide open and almost supported by the long sepals that dart over the edge of the petals. A rose not easy to summarize in photo or to reproduce in painting. The softness of the watercolour in the picture of a floral stem, in fact, cannot tell the general and apparent dull intensity of the colours in contrast with the vividness of the colors of the single organs, the aggressiveness of the small corollas and the dense tissue of the foliage changing from iridescent green to amaranth. More truthful are the depictions of the botanical iconographies where are pointed out either the particulars or the general image of a stem: appropriate are those utilized by Adriano Fiori (1865-1950) in Iconographia florae italicae and by Nikolaus Joseph Freiherr von Jacquin (1727-1817) in Fragmenta botanica, figuris coloratis illustrata.

The first accepted description of Rosa glauca is the one done by the abbot Pierre André Pourret, (1754–1818) in Mémoires de l’Academie Royale des Sciences, Inscriptions et Belles Lettres de Toulouse (3: 326, 1788) and is very concise. This rose is characterized by its bristly calyx, the spinolose peduncles, the stem and petioles endowed with prickles and by the leaves composed by 5-7 (on the floriferous branches and 9 on the stems), glaucous ovate-lanceolate leaflets. 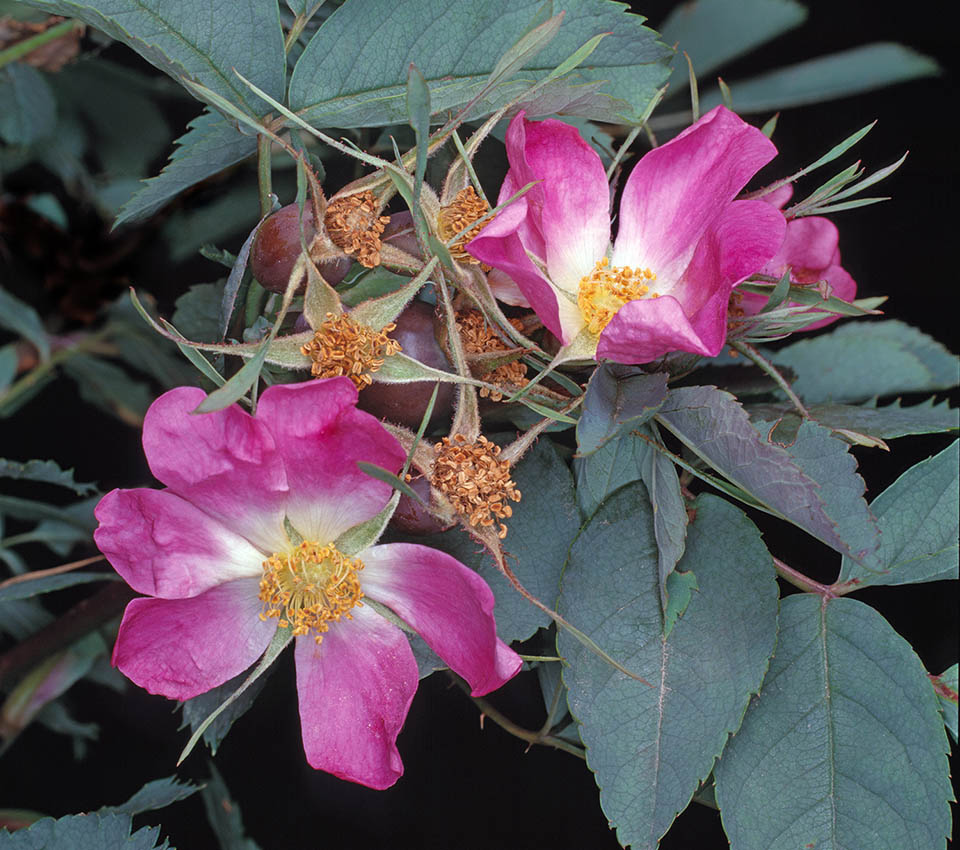 The inflorescence is more or less flowered. Here many petals already fell and the sepals, with just dilated long tips, are still spread © Giuseppe Mazza

The text suggests also to pay attention to not confuse this species with the Rosa alba L., even though these are different from each other in terms of posture of the end of the shape of their glaucous leaves.

Adriano Fiori, identifying it primarily in Rosa rubrifolia Vill. and then in Rosa glauca Pourr., enunciates further details in describing it. He reports, among other things, that the sepals are narrow, end in long sharp tips, are longer than the petals of a lively pink (fuchsia) colour, straighten after the anthers and are persistent until the ripening of the small and glaucous receptacle. He reports that prickles are delicate and hooked.

Landscape architects provide detailed information on the appearance of this hardy shrub (1 to 3 meters high and blooming from June to August), as it is effectively used in gardens thanks to its decorative qualities given by foliage and the small seductive corollas.

The calyx is roundish, and its sepals lengthen tightly over the flower bud ending freely in a tuft. The flower is odorless, with free styles and with a crown of yellow anthers usually as clear as the stigmas; the corollas have bicolor petals with white center and are borne in corymbs by peduncles and pedicels brownish purple, rarely bristly-glandular. The lanceolate and sharp bracts may be wide and equalize or exceed in length the pedicels; the bracteoles are decidedly smaller. 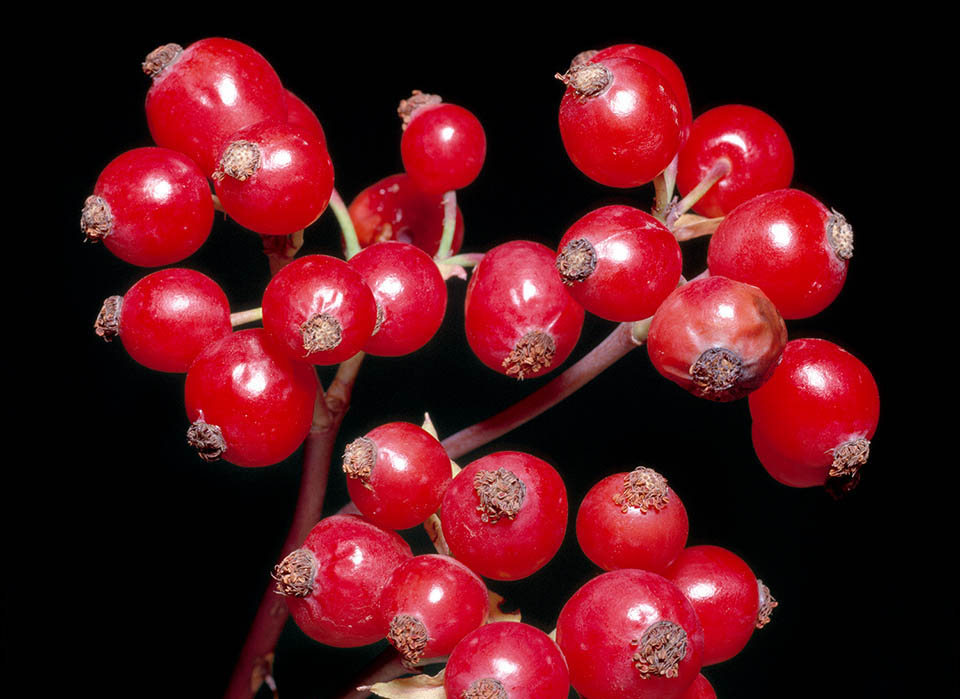 The rosehips, when ripe, maintain the subglobose shape of the hypanthia, and they change color from green violet and plum to a luminous sealing-wax red and lose the sepals. At this point the corymbs look like bunches of small shiny spheres and together with brown reddish stems render ornamental the plant even in winter.

Rosa glauca, even if having a wide distribution area going from central and southern Europe to the European Russia and growing between the 400 and the 2000 m of altitude, is not a diffused rose, but is sufficiently ubiquitous (stony slopes, limits of meadows, margins of woods and very humid sites). It is found isolated or in group and tolerates irradiation and a partial shading, which makes it a precious plant for the landscape architects.

In full sun it presents flowers with most vivid shades and, if sheltered a little, shows a better color of the foliage (glaucous, greenish azure or azure grey, at times reddening). Indicated by Gertrude Jekyll (1843-1932) in Roses for English Gardens as a rose well distinct from the others due to the foliage that is tinged with a purplish-red shade, is utilized in the mixed borders, in the informal hedges and as single bush. It has been settled as side scene plant in the Gardens of Trauttmansdorff Castle in Meran (Italy) and has been arranged like a triune bow on a cypress in the park of the Iford Manor (UK), conceived by the Edwardian designer Sir Harold Ainsworth Peto (1854-1933).

Rosa glauca has nine synonyms of which the most known are, in the order, Rosa ferruginea Vill., Rosa rubrifolia Vill. and Rosa livida Host and is commonly called Rosa paonazza in Italian, Dog Rose in English and Rosier glauque in French.