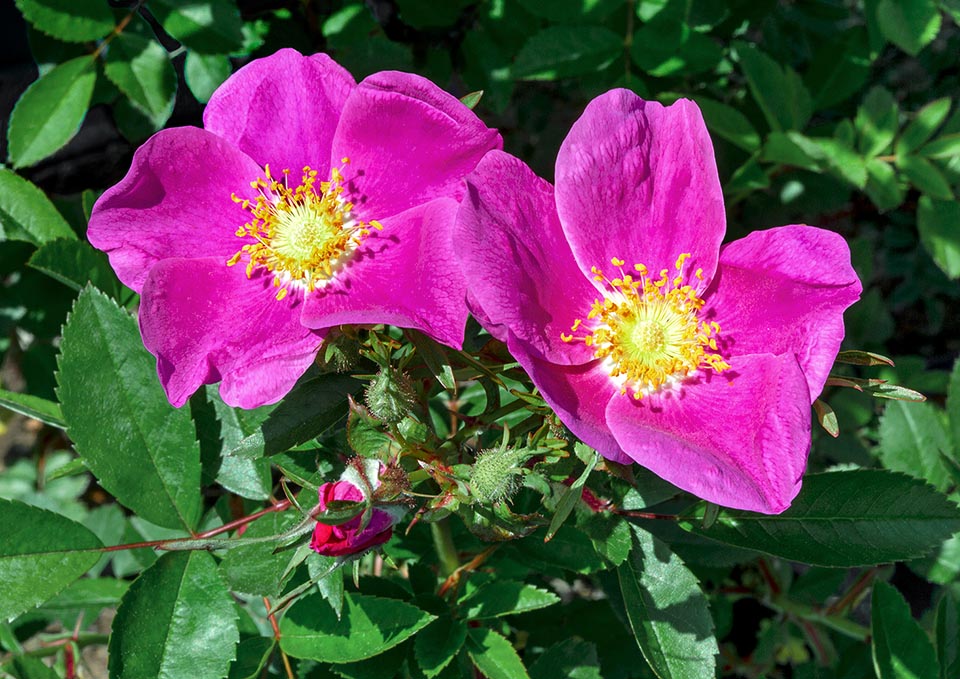 The shallow emarginate petals of Rosa Virginiana appear arched; the styles are just emerging and form a tiny dome on the disc of the subglobose hypanthium © G. Mazza

By convention, instead of the homonym Rosa virginiana Herrm., the name conserved (declared legitimate) with right of priority, is Rosa virginiana Mill. and the relevant herbarium sample is located in the British Museum. 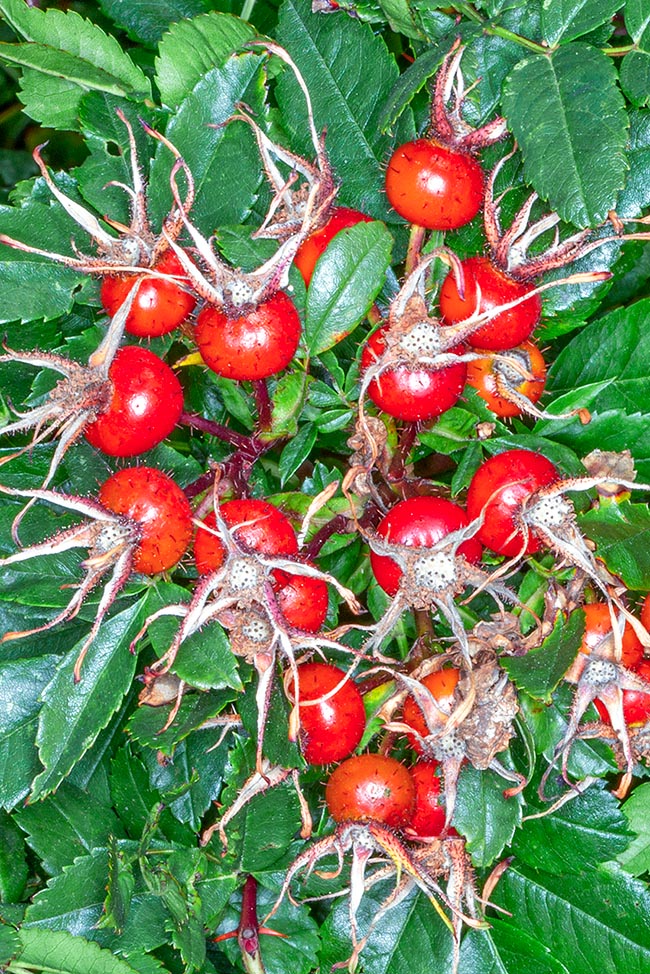 Ripe rosehips are sparsely stipitate-glandular. Are visible paires aculei on violet stem, the remains of the stamens and of some stigmas, the pinnatifid and erect long sepals and the shiny green leaves of simply serrate margin © Giuseppe Mazza

Closely related to Rosa carolina, Rosa virginiana is known also with the common names of Virginia Wild Rose in English, Rosa lucida in Italian, and Rosier luisant in French.

According to the diagnostic characters, fixed by Plilip Miller in The Gardeners Dictionary (ed. 8 n. 10, 1768), is unarmed, has entire bracts (leaves of the empalement undivided)  and glabrous are the ovate leaflets with serrate margins. In other texts are reported further information, here below some of the most significant.

The upper pagina of the leaves, formed by 5-7 (-9) leaflets, in the vegetative period is of intense green colour and is shiny.

The stems are unarmed but with frequent presence of paired prickles at the nodes or at the base of the leaves; the peduncles have bracts amply elliptic-pointed; the buds have widened sepals, lanceolate, elongated, the outer ones are usually pinnatifid.

After blooming, the sepals tend to straighten up, become erect, and finally deciduous; the flowers are simple, of more or less intense pink colour (rarely white) and are carried singly or 1-6 (-15) in corymb, from which originate heaps of globular rosehips, red when ripe. The Virginia wild rose blooms from June to mid-August.

Native to the coastal regions of eastern North America, it is believed that it has been one of the first American roses known and cultivated in Europe. For ornamental purposes, variants with full flowers have been preferred; in 1768 Miller himself indicated “The double Virgin Rose” as a garden rose.

The Virgina Rose is not suitable for isolated positions because it is making suckers but, conversely, is useful for borders and crosshatchings. It is attractive because of the autumnal change of colour, for the colourations of the bark of the stems going from red-brown to violet and for the masses of rosehips. It does not disdain humid soils, provided well drained, and prefers a position in full sun and soil rich in humus.

In Europe Rosa virginiana has undergone introgressions (back crossing of a hybrid with parental groups) like in its origin territories. The group of plants formed by the hybrid (Rosa carolina L. × Rosa virginiana Mill.) and its introgressors is indicated with the common name of New England Rose and the set of plants has been identified as the nothospecies (new hybrid species) Rosa ×novae-angliae W.H.Lewis