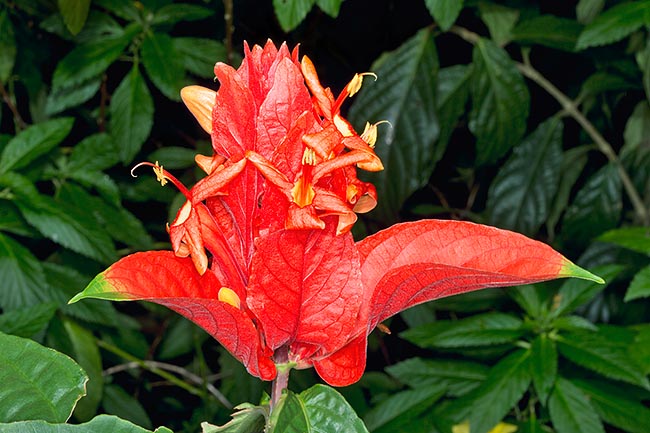 The Ruellia chartacea (T. Anderson) Wassh. (1987) is native to the tropical forests of Colombia, Brazil, Ecuador and Peru.

The genus is honoured to the French physician and botanist Jean Ruel (1474 ca. – 1537), author of a treatise titled “De Natura stirpium libri tres”, in which he reported all the botanical knowledge of the time; the Latin name of the species “chartacea” = chartaceous, papery, refers to the appearance of its showy bracts.

Evergreen shrub, tall up to 1,5-2 metres, with thin brown-grey stems and opposite elliptic, 15-18 cm long and 6-8 cm broad leaves, dark green on the superior page, and pale on the inferior one. The terminal inflorescences are formed by showy bright red bracts, long up to 9 cm, which persist for many months, in which interior do open orange-red tubular, 5-6 cm long and about 3 cm broad flowers, with a yellow throat. It easily reproduces by cutting.

Typically tropical plant due to its requirements, does not stand temperatures lower than +5°C; it likes better shady and humid locations and sub-acid or neutral soils. Cultivated in pot, it’s utilized for indoor decoration, in particular during Christmas time, when it’s blooming, as it is a short-day plant. Natives utilize the roots as anthelmintic and emetic.