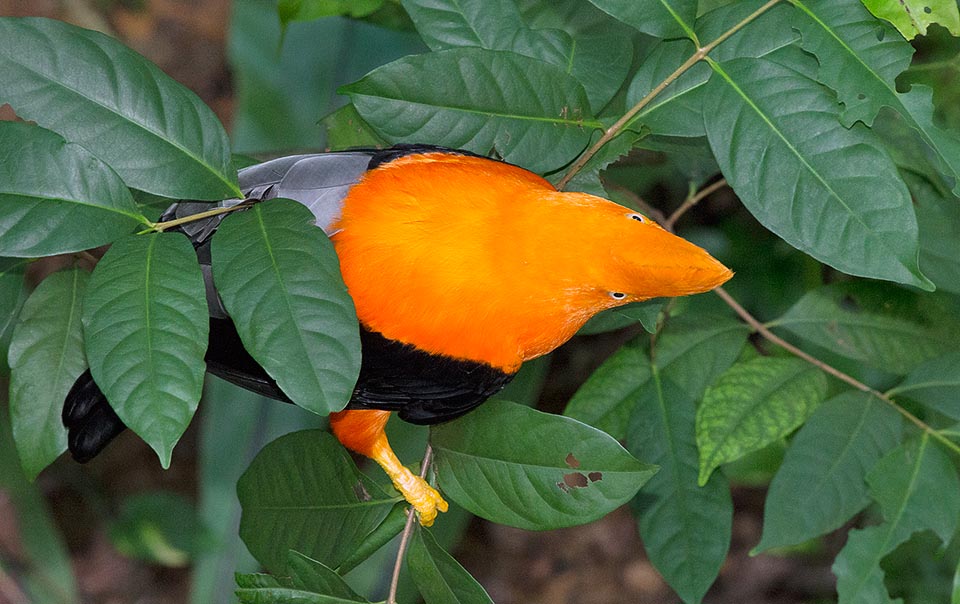 Colourful, but mimetic as shape, I suddenly spring, like a ghost, from the inaccessible South American forests © Giuseppe Mazza

No wonder if Peru, the nation in the world that may count on its territory the greatest density of species of birds, has chosen as national emblem the Andean cock-of-the-rock, this nice and coloured bird that lives close to the Andean cordillera.

It is rare to see me, even more to recognize me as I fly fast, I rapidly hop among the branches and have an odd profile, not always easy to read © Giuseppe Mazza

They have wonderful parrots with garish colours, woodpeckers with dramatic liveries, multicoloured flycatchers and hummingbirds and yet the choice fell on this passerine. 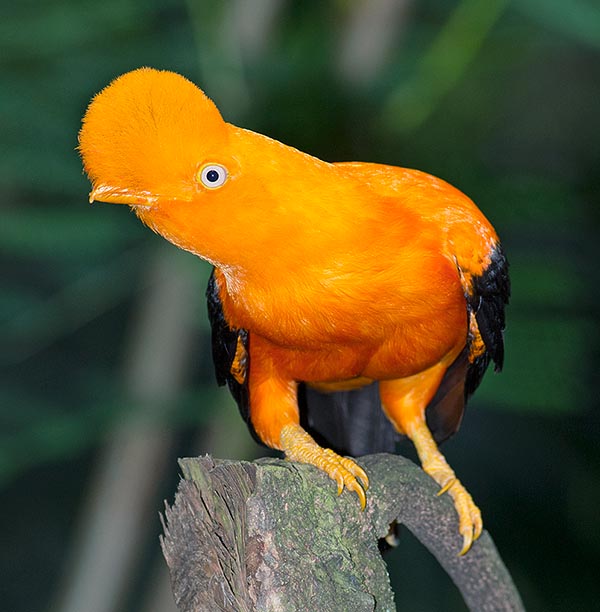 Here I have an already more normal look. I am the elusive Andean cock-of-the-rock (Rupicola peruvianus), so called due to the flat tuft of feathers I have on the head © Giuseppe Mazza

Indeed, the morphological characteristics of this bird are rather particular and already by themselves would deserve this recognition but if we add the fantastic colours and still more the almost preeminent membership to the Peruvian area, the coveted award is well deserved.

The Andean cock-of-the-rock (Rupicola peruvianus Latham, 1790) belongs to the order of the Passeriformes and to the family of the Cotingidae group gathering South American birds with particularly coloured liveries.

It is still being debated if to classify them in a specific family of the Rupicolidae.

The closest conspecific is another almost similar cock-of-the-rock who however lives in the area of the three Guyanas and with whom it shares only the northern part of its range.

Clearly, the common name of cock, used in the Latin countries or cock-of-the-rock for the Anglo Saxons, do not have any relation with the typical domestic chicken (Gallus gallus) well known to us but its behavior and the crest on the head, so much pertaining to this bird, have suggested to the first European explorers this fanciful nickname.

The fact that it frequents rocky areas has then been the logical reason of the matching of this chraracteristic to its name.

Here is my female. It nidifies among rocks and from this habit comes the nickname © Giuseppe Mazza

The name of the genus Rupicola has come from the combination of the two Lartin terms “rupes” = rock and “cola” = inhabitant, rightly for the habitat frequented and the specific one peruvianus = Peruvian, from the area where it is more common.

Initially, this species was assigned to the genus Pipra (Pipra peruviana) a Greek term, resumed by Aristotle, to indicate generically a small coloured bird never identified.

The Andean cock-of-the-rock, as the vulgar name avers, lives in the area close to the northern part of the famous South American cordillera, from western Venezuela up to Bolivia, in an ample arch that faithfully follows the Andean mountain ridge.

In the northern part of the range it partially comes into contact with the congener and analogous Guianan cock-of-the-rock (Rupicola rupicola).

It basically lives on the eastern part of the cordillera, the area covered by the forest that descends degrading and increasingly lush, up to the Amazon River basin or those of the various rivers that come down from these mountains.

Needing thickly wooded habitats, the plateaus totally devoid of vegetation and the dryness of the western side, are a barrier and an insurmountable natural limit that does not allow it to get in touch with the Pacific Ocean coast. As a matter of fact it reaches a maximum altitude of about 2500 m. It is a sedentary bird and hardly moves from the forest where it was born. 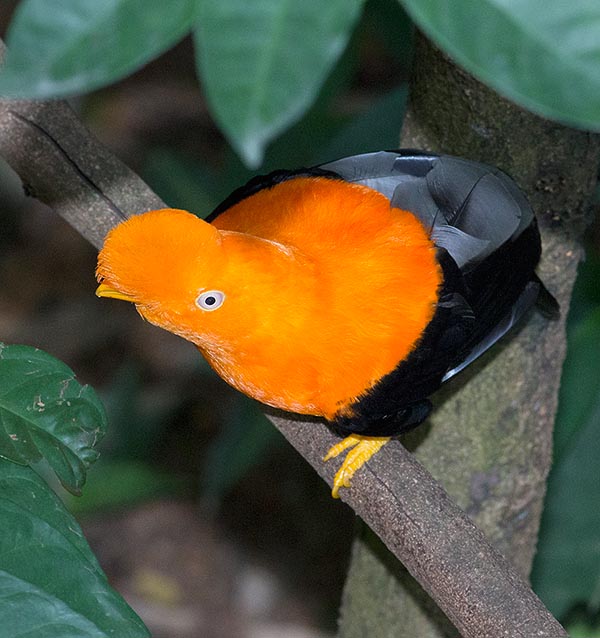 Of the Andean cock-of-the-rock have been classified four subspecies mainly linked to the occupied territory or to the colours, more or less marked, of the livery.

The Andean cock-of-the-rock is a bird well known by all South America inhabitants but few ones have ever had the chance to see it directly in the wild.

In fact, it lives inside the thick hardly accessible humid forests, harsh environments due to the presence of rocks and ravines, dark and humid caves, of areas perennially burdened by humidity and tropical fogs, inhabited by swarms of annyoying insects and of dangerous animals, so dense and dark corners to hide to the view also a jewel of such a beauty.

However, it has become famous and renowned for its social behavour that leads it during the mating period, to gather in quite numerous noisy and coloured groups that brighten remote corners of the forest.

During the other periods it’s a very shy and difficult to observe bird, as it usually moves on low and leafy trees and only occasionally goes up to the tops of these for eating ripe fruits. Likewise, it seldom can be seen in passing crossing open spaces for passing over water streams or narrow valleys. 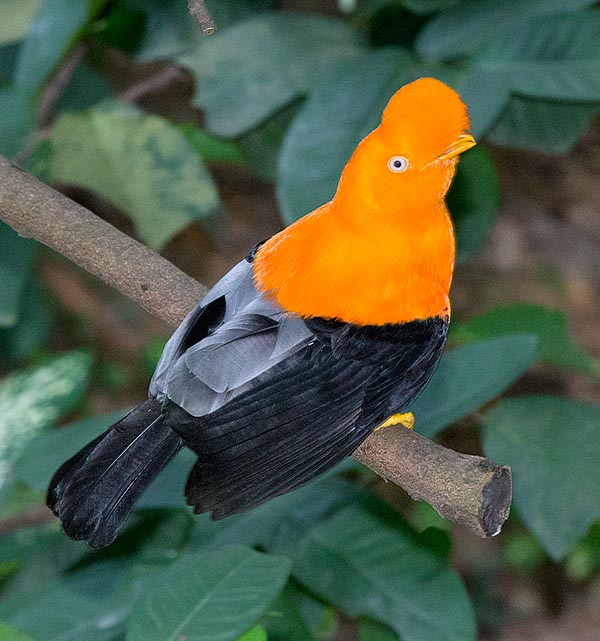 A lightning, very rapid and imperceptible, with closed wings, of bright orange colur that suddenly and indefinite stands out, on the intense green background of the forest.

The necessity of living in rocky habitats with caves and caverns, also partially hypogeous, is due exclusively to the exigency of nidification.

The Andean cock-of-the-rock is a very coloured bird and with quite particular shape, difficult to forget after having met it.

The sexual dimorphism in these species of birds is quite marked, so much to lead to render the two sexes looking as of different species.

The female is of brown colour slightly suffused of orange, with pinkish brown beak and greyish legs. On the forepart of the head it has a slight swelling, like a fixed crest, due to a significant elongation of the feathers that starting directly from the base of the beak end on the head without reaching the nape.

This characteristic is much more marked in the male, so much to be the reason that has suggested the vulgar name of cock. The crest has the shape of a perfect crescent that on the fore part covers and hides the beak, so much that, seen in profile, renders indistinguishable the frontal part of the nape.

The male has the body, crest included, of a shocking orange colour, tending at times to red, that stands out with splendour against the black raven of the coverts and primary remiges and of the tail. 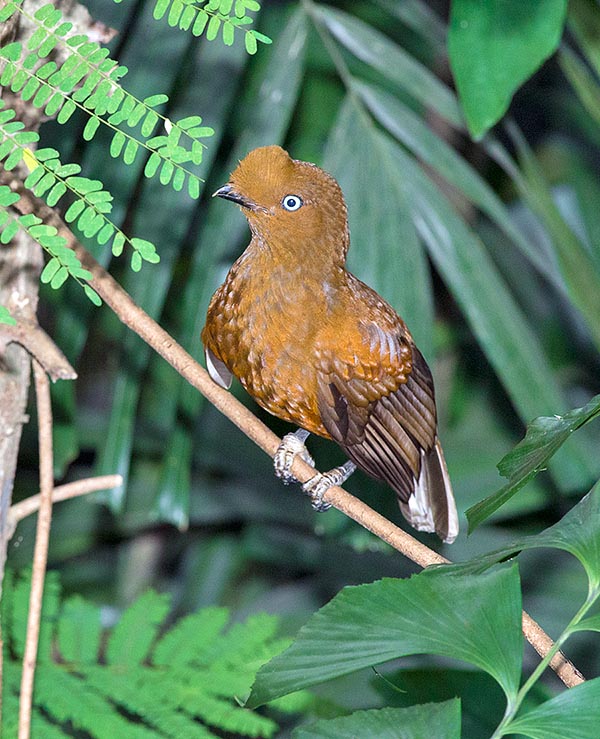 The females look, choose and touch the selected one with the beak. Mating is quickly done and then run forever. They build their nest bonded with herbs, moss and mud on a vertical wall, as the swallows usually do, or in the grottoes dark, where their brown mimetic livery is even more unnoticed © Giuseppe Mazza

Conversely, the secondary remiges are clear, of an ash grey colour that stands out in turn, dramatically, between the black of the wings creating, when ajar, a wide linear stripe that runs the lower part of the back.

This colouration of the back distinguishes it from the Guianan cock-of-the-rock that instead has it almost completely orange.

Beak and legs are yellowish. The eyes of the female are usually whitish whilst in the male there is a wide range of colour going from the pearl white to the reddish depending on the age in the different subspecies.

The social behaviour of the cock-of-the-rock during the reproduction period is quite characteristic and is common in all those species of birds where the task of the male is only that of mating without then been obliged to care neither of the temporary partner nor of the originated offspring.

On the other side of the world we find the same behaviour in the so-called birds-of-paradise, like in the Paradisaea minor.

The nature often can be very cynical and the love that we, humans, intend as as an essential link for a common continuation of the species and necessary union for its growth, does not always result determinant for obtaining a certain result.

When the moment of the nidification has come, all the males of a zone gather in a precise point of the forest to show their flattering capacities, where all the females of the surrounding area converge in their turn for choosing the most vigourous male.

It is a noisy arena, gay and often chaotic seen that the males face frantically hopping from branch in branch, then on the ground and again on other branches around while the females, motionless, assist as they were on the sidelines of a theatre to their performances. 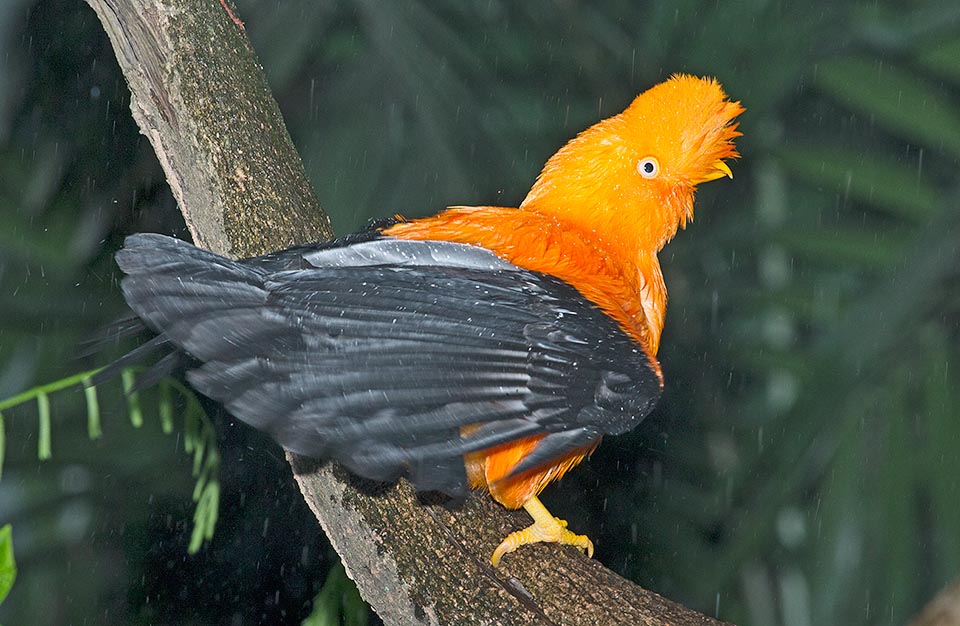 I don't brood, don't feed the sons with insects and small vertebrates. I stay still here, as sentry: even if the rain starts, other females might arrive © Giuseppe Mazza

Often the males, to evidence their bright colour stand on the few points where the sun rays accidentally succeed in passing through the thick foliage of the overlying branches, putting still more in evidence a colour already itself well visible even in the dark of the underwood. 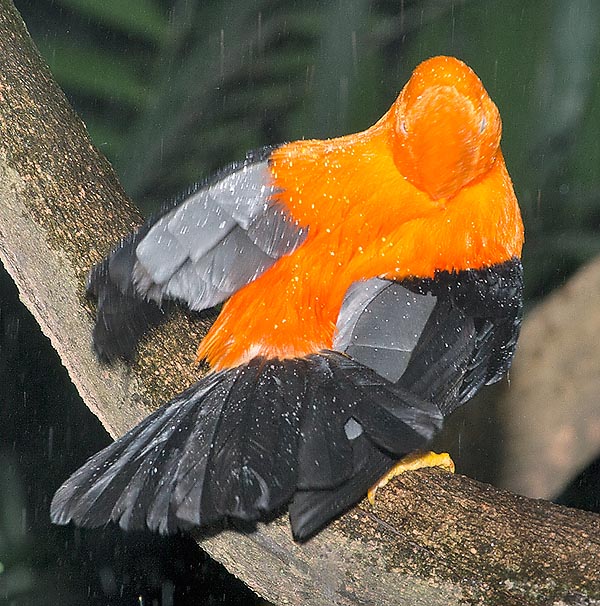 Finally, what's better than a shower to disappear in the sprays? Am I or not the forest elf? © G. Mazza

When the female has chosen its partner, gets close to the preferred male, often touching it slightly with the beak to confirm the choice done and the mating takes rapidly place. A moment of love and affection to perpetuate the species then each one for its way or better, the female immediately runs away into the thick of the forest whilst the male remains in place to entice other preys.

Since that moment the female will begin autonomously the construction of the nest and the care of the brood. It usually lays two eggs into a semi cup shaped nest, built with grass, moss and mud leaning against a vertical wall, even low overhead, or inside a grotto in the even deper darkness.

The colour of its livery, on a body crouched half hidden inside the nest, having been this one built with material of the same colour as the support on which it stands and placed in a dark site of a gloomy and misty forest, practically renders the nest invisible.

The brooding lasts as an average four weeks and the small nestlings stay in the nest for 6-7 weeks more.

The Andean cock-of-the-rock mainly nourishes of fruits but doesn’t disdain, in particular when feeding the small nestlings, to integrate the diet with insects, reptilians, amphibians and even small rodents. This bird, by eating a vast variety of fruits, guarantees with the expulsion of the seeds still perfectly germinating, a strong dispersion of the essences it eats. It has no foes in nature and consequently is not considered as endangered species.