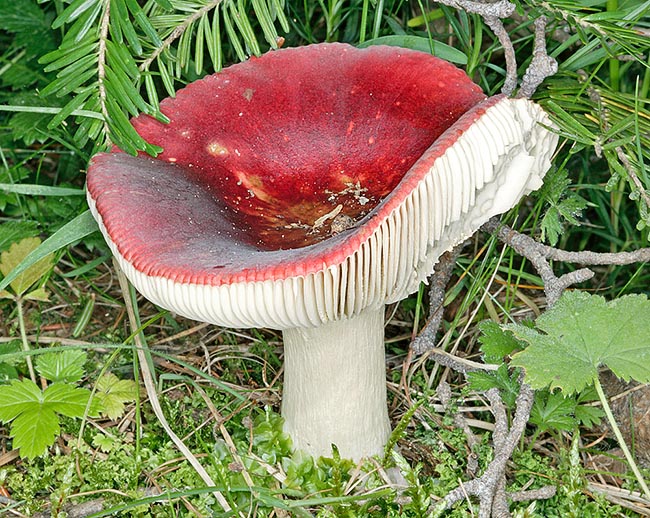 Inedible due to its acridity, Russula atropurpurea grows in late autumn in broad leaf woods, at times also under conifer, on acidic soils. Very common in sub-Alpine and Mediterranean zones © Giuseppe Mazza

The epithet atropurpurea comes from “ater” meaning dark and “purpureus” due to the usually purplish shades of the cap.

It is a very common species, ubiquitous, not edible due to the sourness even if moderate more more remarkable in the flesh of the stem.

There are no popular names attributable to this species, at least in Italy and Spain; in France it is known as “Russule pourpre et noire”; in England, “Blackish purple Russula”, “purple brittelegill”; in Germany, “ Purpurschwarze Täubling”; in USA, “Blood-red Russula”.

For the description of the genus, please refer to Russula vesca, for the subgenus and the section, to Russula mairei.

To the subsection Russula are ascribed species with white spore print, only exceptionally, cream. The stem without traces of red hue; the gills tending to decur on the stem, do not show aqueous droplets; the flesh in many species is graying, smell of coconut, of amyl acetate, but never of pelargonium. Microscopically, the species have unicellular or pluri-septated dermatocystidia, well characterized due to the absence of encrustations.

Description of the Species

Cap: 4-12 (14) cm, fleshy and hard, tender with age, initially hemispheric, then up to flat, finally slightly depressed, thin margin, curved and entire, grooved only when old; removable cuticle per 1/3-1/4, of more or less vinous red-purplish colour, but even wholly yellow/greenish in the f. dissidens but also almost totally pink-lilac on greyish background. 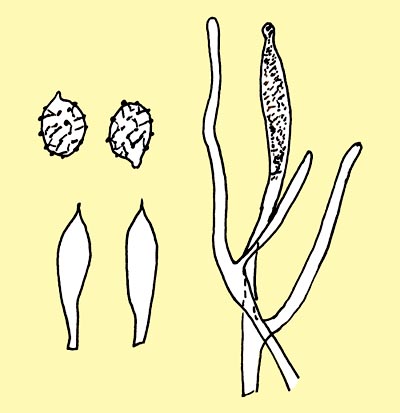 Gills: fairly thick at the beginning, then averagely spaced, with entire thread, annexed and forked to the stem, with few lamellulae; initially white, then pale cream, but also grey-yellowish in the winter findings, cause probably due to thermal stress. White spore print.

Stem: 3-8 x 0,8-3,5 cm, sub-cylindrical, just tapering on top, usually attenuated at the base, rugose, full and firm then soft and spongy, white, then ash greyish due to imbibition and advanced age.

Flesh: initially firm, then tender and spongy, especially in the stem, white then greyish, pinkish under the cuticula, sweetish in the cap, inconstantly sour in the gills and stem; almost no smell or just of fruit compote or almost imperceptibly of flowers.

Habitat: it grows in late autumn in the broad leaved woods, at times also under conifers, on acidic soils; rather common species from the sub-Alpine to the Mediterranean zones.

Edibility: not edible because of acridity.

Remarks: it is an easy to determine species, despite the variability of the colour of the cap, due to: the average size, the flesh highly graying due to imbibition or with yellow spots, especially at the base of the stem, with dry weather, the slightly spicy taste, the more or less fruity smell, the pure white spore print.

Usually, it grows under chestnut tree, oaks, hornbeams and holms, but also under the fir and the cistus. However, it may be mistaken with Russula fragilis E.M. Fries, that has highly spicy taste, the smell of English bonbons, the flesh immutable and fragile, the absence of reaction to the Guaiacum. The Russula viscida Kudřna, much similar to Russula atropurpurea, differs due to a brown yellow felt at the base of the stem turning immediately red with the KOH.