Russula aurea has a very vast distribution. It is easily recognizable and is choice edible © Giuseppe Mazza

The meaning of the epithet aurea comes from the Latin “áureus” = of gold, golden, due to the colour of the carpophore.

For the description of the genus, please refer to the text Russula vesca.

To the subgenus Russula are ascribed the species more variable for structure, consistency, sourness and colours of the cap, going from the red to the red-orange, the violet, at times even partly or wholly green, yellow or brown. The spores have the supra hilar appendage amyloid; in the pileipellis and the caulopellis are present the dermatocystidia, unicellular or very septate.

To the Section Polychromae belong fungi with very variable colours, only rarely completely red, of medium or large size, more or less consistency; of mild taste, only rarely a little acrid on the gills. Encrusted dermatocystidia or without incrustations, always present, in the pileipellis excepting the Subsection Aurantinae. This Subsection includes fungi with mild flesh, with the pileipellis without dermatocystidia but formed only by hairs, being the dermatocystidia present only in the caulopellis. This Subsection is monospecific containing, for its characters, the Russula aurea only. 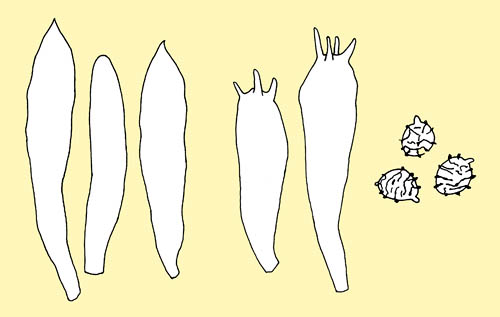 Cap: 5-10 cm, from convex to flattened, depressed when ripe, fleshy; the cuticle is detachable by about half of the radius, smooth, opaque with dry weather, shiny and almost limy when the same is humid; the colour is red-orange, yellow-orange, red-brown with yellow spots, or even completely yellow, at times the disc is darker, almost brown; the margin is smooth, thin, just striated when completely ripe.

Hymenium: adnate gills, thick, frail, with lamellulas, furcations especially close to the stipe, the colour is whitish or cream with lemon-yellow thread; spores white in mass.

Stipe: 4-8 × 1,5-3 cm, cylindrical, enlarged or flared at the attachment to the cap, attenuated towards the base, full then crumbly, wrinkled or even smooth in some specimens, white with yellow-lemon hues.

Habitat: it grows under broad leaved trees (Quercus, Fagus and Castanea), as well as under conifers (Abies and Picea), in humid zones, from early summer to autumn, isolated or gregarious. It is present in most Europe, and also in North America and Asia.

Remarks: it is by sure the best recognizable Russula due to its red-orange or yellow-orange colour (sometimes it can be found also completely yellow), due to the yellow thread of the gills, the yellow shade on the stipe and the fragility of its flesh in the ripe fungus. However, when it stands without its typical colours and tonalities, such as red or purple and the ochreous gills, it is easy to mistake it with Russula laeta, which, however, has red, orange or purple cap, fruity smell and rather astringent taste of the gills, darker spore-print and the pileipellis with dermatocystidia; Russula rubroalba, which, however, has red cherry cap, yellow yolk gills, slow reaction to the Tincture of guaiac and the presence of dermatocystidia; Russula pseudointegra, which has, however, vermilion red cap, but may also fade up to the cream ivory, yellow gills, pelargonium smell, no reaction to the Tincture of guaiac.