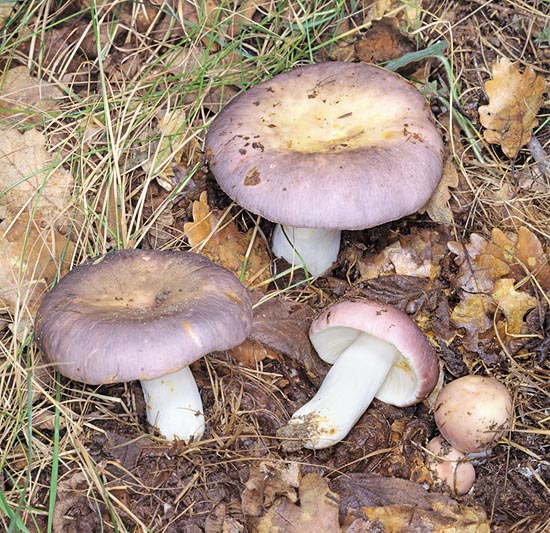 Description of the Subgenus and of the Subsection

To the Subgenus Heterophyllidia are ascribed species with more or less green or violet cap, at times pale, rarely brownish; chunky stem, attenuated below. The flesh has almost no odour, mild or slightly spicy taste in the gills of the not yet ripe specimens. The Subsection Cyanoxanthinae includes species having flesh with mild taste, gills of elastic, lardaceous consistency, at times remaining united under the pressure of the fingers, not frail; the reaction to the FeSO4 is negative, then slightly greenish grey and the spores deposit is white, whitish. This Subsection includes different entities, between varieties and sizes, all revolving around the Russula cyanoxantha.

Cap: 5-15 cm, initially globose, then convex, with slightly depressed centre, cupped in the adult fungus, fleshy, fairly compact; smooth edge, not grooved, rolled inward in the young fungus, straight and finally rolled backward in the adult one. Oily cuticle, brilliant, greasy with wet weather, separable up to about half of the radius, when taken off it shows the underlying flesh having an almost lilac, violet colour; the colour, much variable, goes from the lilac-violet to the brownish-violet, to the black-green, the violet-grey-green, at times stained in spots. 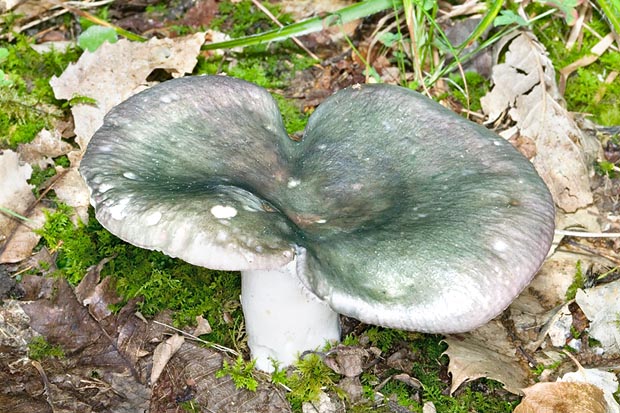 The 5-15 cm cap, spotted at times, may have violet or greenish shades © Giuseppe Mazza

Hymenium: thick gills, low, adnate, almost decurrent, large, typically greasy to the touch, arched, forked in an inconstant way, especially towards the margin, with several lamellulas; white, whitish, at times spotting of brownish on the edge when ripe.

Stem: 7-10 x 1,5-3 cm, cylindroid, at times ventricose or enlarged in the lower part, at times attenuated downward, rugulose, fleshy, full, from firm to spongy, chunky; completely white, at times spotted of violet especially towards the base, getting grey by imbibition, pruinose initially, then smooth.

Habitat: very common species, growing from early summer to autumn under latifolia trees as well as under conifers, from the Mediterranean zone up to North Europe.

Edibility: choice edible, it might be consumed even raw in a dressed salad, preferring, in such case, those coming out under chestnuts and turkey oaks.

Chemical reactions: to the iron sulphate (FeSO4): negative but belatedly teal; to the guaiac tincture: it rapidly reacts positively. 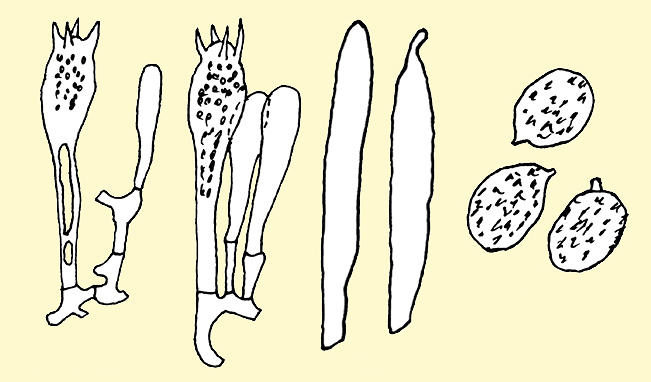 Remarks. It is a Russula which, due to its peculiar characteristics is easily recognized. The colour of the cap rather variable, from the colour covering a range of shades going from the lilac-violet to the dark violet, also with greenish or teal nuances, the greasy, waxy consistency of the gills which do not break under the pressure or the rubbing of the fingers, from the lilac-like or violet colour of the flesh under the cuticle of the cap.

Some varieties and forms have been described due to the great variability of colour:

►the variety cutefracta, which has the cap cracked and areolate, especially towards the margin, the colour with a more greenish shade; with rusty ochre spots especially in the centre.

►the variety variata, with the green, blackish green, cap, but also huge violet spots, the white stem, rugulose, shaded of lilac-like colour on a side, whitish flesh with an unpleasant smell, soon vanishing, just spicy taste, then acrid and a little sour.

►the variety flavoviridis, with the cap lemon yellow and smaller spores, after Romagnesi.

►the form peltereaui, which has, since the beginning, an olive green cap.