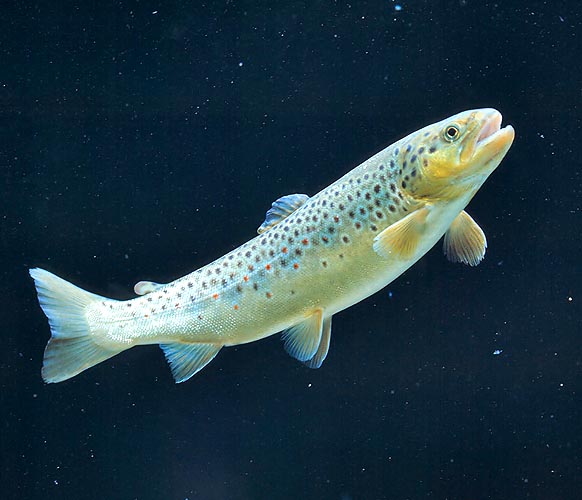 The trout, freshwater bony fishes, even if, as we shall see, they may live temporarily also in sea waters at low saline concentration, afferent to the genus Salmo, to the family of Salmonids (Salmonidae), to the order of Clupeiforms (Clupeiformes), are diffused in good part of Eurasia and North America, and are especially found in the fresh current waters.

One of the best-known species is the common Trout (Salmo trutta Linnaeus, 1758), of which one race is the Salmo trutta fario, fishes much appreciated at gastronomic level.

A congener, the Atlantic Salmon (Salmo salar) is very diffused in the running fresh waters of north Europe, North America and Canada, of which the bears are greedy.

The systematic of these salmonids, however, seen their extreme variability and also the fact that many species native to other countries have been introduced in many regions and have crossed with the autochthonous species, is extremely complicated.

So much that the opinions of the ichthyological biologists are often differing a lot when it is matter of granting to this or that insular form, for instance, the value of a race of one only polytypical species, or that of good species. After the opinion of the most preeminent biologists, however, in our continent (the European), there should be only one species of native trout, the common Trout (Salmo trutta), which should have differentiated, for ecologic and genetic reasons, in a huge number of local races such as the Salmo trutta fario, many of which, in fact, have partially hybridized with North-American trout, keeping in mind that the crossings between salmonids happen with an enormous frequency where two species, systematically not much distanced, do cohabit.

Always within the complex of populations referable to the species Salmo trutta, the home range of these fishes includes internal or continental waters, that is, fresh and running, of central-northern Europe, and also the waters of the Baltic Sea and of the North Sea which have a low saline concentration.

The Salmo trutta, like, generally, the trout, prefer cold running waters (rivers, rapids), with a high contents of oxygen and very choppy, where they stay in the constant research of preys consisting in fishes and other aquatic animals of quite variable size, at times even big. They are able to swim very well upstream and they hide between the aquatic vegetables or under the stones, lying in wait for other fishes on which, when they come within range, they jump greedy, even if they are preys rather big. The Salmo trutta, eats willingly aquatic insects, larvae and worms, in addition to small fishes and crustaceans.

Even if much similar as somatic structure, the different species of trout, regardless of the colouration of the livery, differ clearly mainly for what are concerned the development and position of the fins, the shape of the scales, etc. 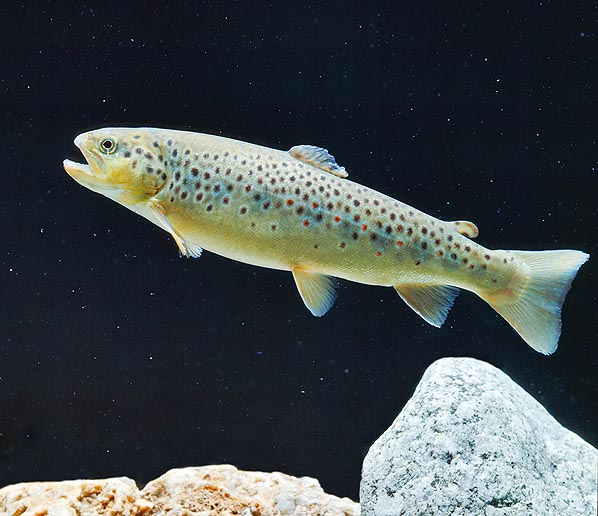 Referring to the common Trout (Salmo trutta), we may see that this salmonid has an oval body much elongated and compressed laterally, wholly covered by small scales. The head, with the eyes rather great, is quite big and with an ample mouth. The teeth, small but very sharp, are present, besides the jaws, also on the palate and on the tongue.

Among the two dorsal fins, the first one is remarkably developed, the second, the “adipose” ones, much smaller, is inserted on the trunk well behind, close to the tail, which is diphycercal.

The caudal is little or not at all trimmed at the margins along the upper edge, and this an excellent systematic character, which allows to distinguish with facility our Salmo trutta from those imported from North America like the Steelhead of Rainbow Trout (Salmo irideus), which, on the contrary, have the back caudal margin deeply indented. The anal has shape and development analogous to the second dorsal, to which, anyway, is opposed. Rather developed, furthermore, are the ventral as well as the pectoral fins. It is almost impossible to treat about the colouration and the livery in a general sense, seen that both are extraordinarily variable. We can say that the dorsal parts are always darker, greenish or grey, whilst the sides are gradually clearer, yellowish, almost silvery-white or light grey. Several coloured dots are always present, with extremely variable extension and depth, mainly dark; these dots in the Salmo trutta of our alpine streams are at times ocellated with a red background.

The great lake trout, always referable to the Salmo trutta and the Salmo trutta fario, in our continent and in particular in Italy, are usually more slender than their current water sister and have, usually, a brown maculation, besides a background tint tending to the blue. For what the dimensions are concerned, the common trout may reach enormous sizes. Some sterile females, for instance, may exceed the metre of length and the 10 kg of weight.

Moreover, when the reproductive time comes, the individuals of Salmo trutta stationary in the sea (Baltic and North Seas) or in the lake basins, travel up rivers and streams like the salmons, in order to reach altitudes, at times very remarkable over the sea level. In this period, in fact, these salmonids need well oxygenated waters and, just to reach the mountain basins, do not hesitate in leaping over small waterfalls and cascades, and in engaging with the strongest and most whirling currents, emulating, even if in a less spectacular way and with more modest outcomes, the sensational performances of the salmons, such as, for instance, the Salmo salar.

Once reached, by the end of winter, the longed locations, where there are the best environmental conditions for the spawning, that is the presence of bends of the mountain streams where the sandy bottom is strewn with pebbles; this fishes get ready for perpetuating the species. 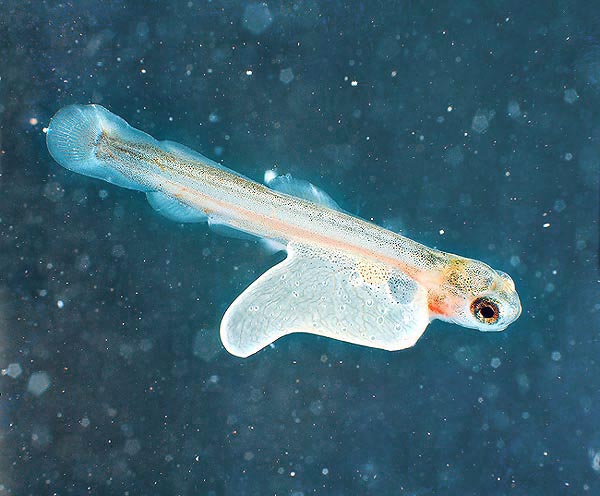 Males and females, together, dig a shallow recess in the mud, and remain long time there, alongside. The female will lay the eggs; the male will fecundate them with the sperms, especially during the night hours.

The biologists calculate that a female may lay even 2000 eggs per kg of weight. The embryos (larvae-fry), which have the diameter of about half a centimetre, have a yellowish colouration.

At the end of the reproductive act, the parents go back to their origin zones, quite often passively transported by the current because of the effort made, which has deprived them of all energy. Very greedy for food, the fry grow up quite rapidly, so that, after one year, the young trout reach the length of 15 cm, and by the end of the second year they are 30 cm long and may weigh even 150 gr. By this age, moreover, the males reach the sexual maturity, whilst the females are ready for reproduction only by the next year.

We do not linger in extolling the quality of the flesh of the Salmo trutta and of the Salmo trutta fario, well known to all, for which reason these salmonids are actively object of fishing and, even more, of farming. Presently, the Salmo trutta and the Salmo trutta fario have become less common in almost all their home range, due to the aggressive competition of alien species introduced with “halieutic” purposes by the humans, such as, for instance, the Steelhead or Rainbow Trout (Salmo irideus), native to California, more greedy and fertile, capable to adapt in habitats even little comfortable and with a kinetics of post-natal growth much faster. The IUCN and the Wwf are closely monitoring the situation.

For information, as they will be treated in the specific texts from time to time, other species of trout are the Carpione (Salmo carpio), which may be bigger than the common trout, typical of the Garda Lake, but nowadays naturalized in other Italian lakes and the Oncorhynchus mykiss known also as Salmo gairdneri.

Then, there is the already mentioned Rainbow Trout (Salmo irideus), native to California; another North American trout introduced nowadays in the European and Italian waters, generating the aforementioned competition phenomena to the detriment of the autochthonous trout, is the North America Trout (Salmo shaster); even if inscribed in another genus, however extremely close to the trout’s one of the genus Salmo, we find the Arctic Char (Salvelinus alpinus), which, in our waters, has generated the race Salvelinus alpinus salmarinus, by hybridization.

Lastly, another native to North America, nowadays present in our waters as well as in the European ones in general, is the Salvelinus fontinalis.  Then, there is the giant of the group which may reach lengths over the two metres, present in the Danube waters and now, because introduced, also in the Rhine ones, which is the Salvelinus hucho.