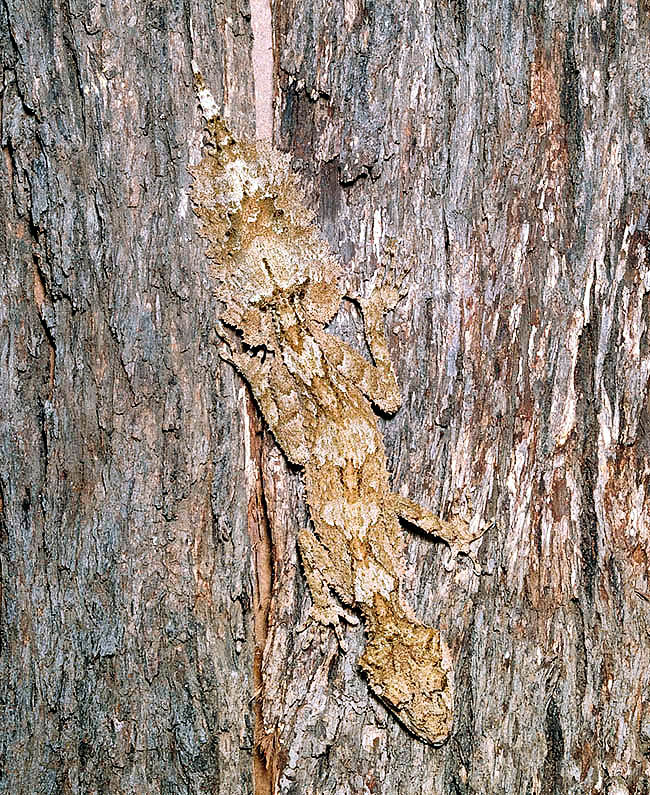 The Saltuarius cornutus, known also as Phyllurus cornutus is diffused in the woods and in the coastal forests of the eastern belt of Australia. Locally called “Northern-Leaf-tail-Gecko” or “Leaf-tailed-Gecko” due to the tail resembling a leaf, covered as it is by spots and protrusions that look like lichens, it surely deserves the camouflage degree. Tail included, it reaches the 22 cm, and seen the arboreal life it does not have suckers on the fingers but claws to climb rapidly on the barks, where spends the day hidden in the ravines. It gets out hunting insects only by night and if the spiny scales on its body, limbs and sides are not sufficient to discourage the aggressors, it raises and shakes laterally the tail simulating a threatening head. At worst, if they eat it, then it will grow up again, good or bad. The females lay-1 2 eggs with a strange shell resembling parchment. They are buried at little depth, under the litter of the forest in nests at times shared with other females. In fact up to 14 eggs have been found in a single nest © Giuseppe Mazza