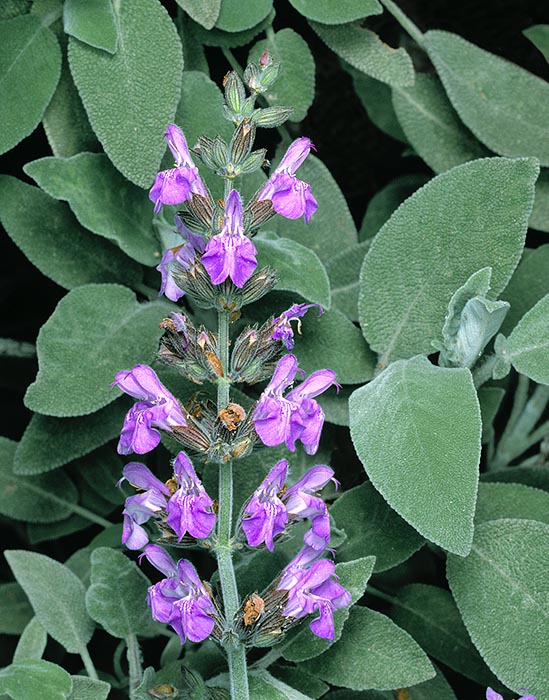 Salvia officinalis flowers pollinate the bees back with a marbell-like mechanism © G. Mazza

The genus Salvia, in the family of the Lamiaceae, is the richest of species (more than 700, after some authors up to 900); it includes shrubs, perennial and annual herbaceous plants. The original centres of diffusion include Central and South America, the Mediterranean area, Central and Eastern Asia. The recent revision done by Gabriel Alziar of the Botanic Garden of the City of Nice, has established the number of the species in about 700, of which about forty are present in Europe.

The Sage or common sage (Salvia officinalis L., 1753) is an evergreen sufruticose plant with eastern stenomediterranean distribution, native to the western part of the Balkans (ex Yugoslavia, Albania and Greece). It has been introduced and cultivated for centuries in many other countries as a cuisine aromatic and as medicinal plant and has become spontaneous in locations with a favorable climate.

The name of the genus comes from the Latin terms “salvus, salveo”, “salvere”, to be in good health, to cure from the disease, linked with the Sanskrit “sárvas” due to the curative properties known since the old times; the name of the species “officinalis” comes from the Latin epithet “officina”, used for most of the plants having medicinal properties used in the “officinae” as were called the pharmacies long ago.

It is a suffrutex 20-40 (<60) cm tall, grey-tomentose with pleasant aromatic smell, with erect stems, from almost cylindrical to sub-tetragonal, ramose, lignified at the base, with patent hairs. The leaves are opposite, simple, lanceolate to oblong, of 1 x 2-3 cm, with obtuse lamina, crenate on the margin, more or less narrowed at the base, with wrinkly surface, whitish underneath due to the thick pubescence, and greenish on the upper page, with 1-1,5 cm petiole.

Inflorescence in verticillasters with (3) 5-10 flowers more or less unilateral. Campanulate calyx, red-brownish to rusty-violaceous, pubescent, with 10-15 mm tube, and lanceolate-mucronate 4-6 mm teeth. Violaceous or violet-bluish corolla, more rarely pink to whitened, with 1-1,5 cm tube and 0,7-1 cm upper lip and trilobated lower one. The flowering takes place from April to June. The fruits (4 achenes) form at the base of the flowers and contain the tiny ovoid-trigonal seeds of dark brown colour. In the wild this heliophilous and thermophilous species grows on the rocks, in the stony pastures and on the arid and calcareous stony grounds from the plain up to 300-800 m of altitude and is cultivated up to the mountain plain.

In cuisine, the sage, known since the old times for its pleasing aroma, is an excellent seasoning for the dishes with roast meats and marinated meat, poultry and game, etc. and favours their digestion. Despite its Mediterranean origin, the presence of the sage for aromatizing meats of various kinds is consolidated since centuries in almost all the European culinary traditions. 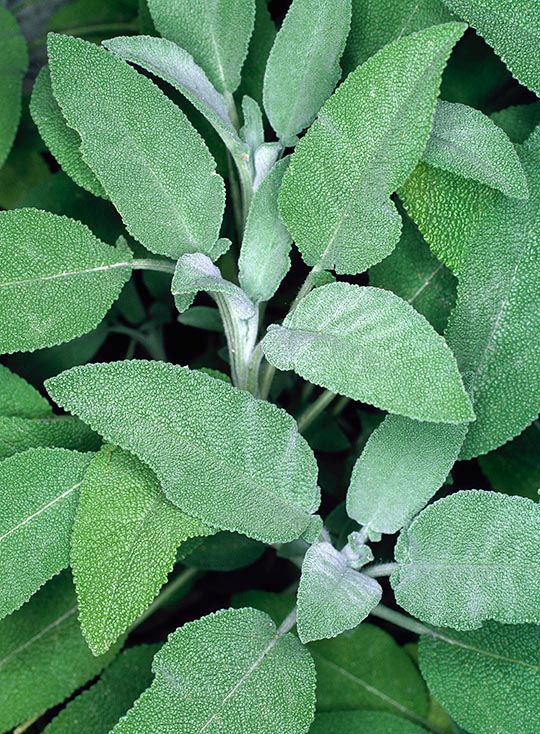 It’s a perennial 20-40 cm suffruticose plant i.e. with woody stem at the base only © Mazza

Less common but not rare is its use for foods of different type: pasta (very known in Italy are the tortelli with butter and sage), cheeses (like some cheeses with herbs), fried sage leaves and also soups. In Middle East, the sage is traditionally used for aromatizing the roast mutton.

Although many species of the genus Salvia have differentiated in habitats even very different in the various continents of the world, they all have in common an impressive evolutive relationship with the insects (in some cases also with the hummingbird!), thanks to an efficacy of luring that renders the unwitting pollinator agent of the fecundation.

The flowers of the sage and also the whole look of the plant have been since always appreciated in the gardening; like other species of the same genus, it is therefore utilized as ornamental plant, in particular its cultivars such as the ‘Tricolor’ with leaves streaked of green, of white and crimson, the ‘Purpurascens’ with dark red leaves, the ‘Icterina’ with yellow-citrine foliar margins, the ‘Crispa’ with curled edged leaves, and also the ‘Maxima’ with much bigger than normal leaves or the ‘Lavandulifolia’ with narrow, linear, tiny, leaves, and others more.

Usually, they are cultivated in rich soil, fresh, well drained, neutral to alkaline, well exposed, and interring 5 plants per square metre. The sage multiplies by layering, by division of tufts and by seed.

Famous is the Schola Medica Salernitana saying “Cur moriatur homo, cui Salvia crescit in horto?”, literally: “How can die a man in whose orchard the sage is growing?”, that is, how can die a man if he cultivates the sage in his orchard?

The sage was already known by the old Greeks and was included in the herbs the old Egyptians used for embalming and deemed it useful to make the women fertile. As medicinal herb, it was famous in the old times and widely cultivated: it was called by the Latin “Salvia salvatrix” and “sacred herb” after Agrippa and Aetius. It was still greatly renowned in all the Middle Age as remedy for all diseases.

The leaves (especially) and the flowering tops collected in May and June (balsamic time) are indicated as antispasmodic, antihydrotic, cicatrizant, astringent, anti-sudorific, slightly antiseptic, hypoglycaemic, eupeptic and stomachic.

They contain 0,8 to 2,5% of essential oil formed by alpha and beta pinene, camphene, beta myrcene, terpineol, limonene, eucalyptol, cineole, borneol, salvene, paracimene, alpha and beta thujone, camphor, linalool, caryophyllene, humulene, cucubene, asparagine, bitter substances, organic acids, flavonoids, tannins, mucilages, resins. In phytotherapy, the sage is used in the dyspepsias, gastrointestinal atony, and menstrual disorders; for external use in the oropharyngeal inflammations. The decoction of sage is an excellent cardiotonic. From the dried, crushed and mixed with honey they get an effective expectorant compound. The infusion of sage is a good tonic for the hairs, favours their growth and improves their appearance. The fresh leaves purify the breath and, rubbed on the teeth clean them and the gums profit from it. The essence of sage is very much required by the market and is utilized as aromatic component of soaps, detergents, creams, lotions, colognes and aftershaves. 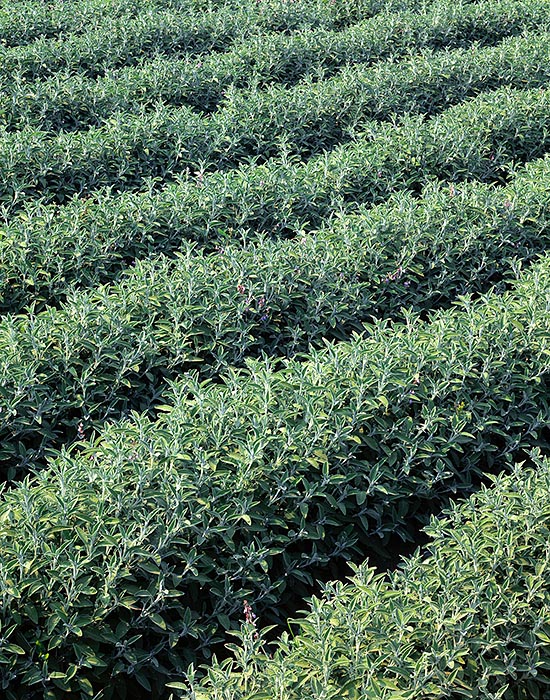 Cultivated since the old times for the cuisine and for the well known medicinal virtues © G. Mazza

In 2003 the Medicinal Plant Research Centre of Newcastle University has published an interesting study which proves that sage based preparations improve the mnemonic processes and contrast the deterioration caused by Alzheimer’s disease. I remind, however, that the essential oil of Sage at high dosage or assumed for long periods is toxic due to the presence of the compound ketone known under the name of thujone and is not to be taken during the pregnancy, during the nursing and not even by those having problems of renal insufficiency. In Europe, the normative has established a ceiling to the contents of thujone in the aliments, which is of 25 mg/kg in the case of foods aromatized with the sage.

The tip of a knife of dried leaves in powder mixed with a spoon of honey. To consume three-four times per day for one week, before menses.

In a teacup of boiling water put a teaspoonful of dried leaves of sage, stir and cover with a saucer. Allow to rest five minutes and drink one cup in the morning, afternoon and evening.

Digestive and eupeptic grappa with sage

In 900 cl of good aged grappa put to macerate twenty leaves of sage for two weeks, add 100 cl of honey (better if of dandelion) and shake well, leaving to rest one week more; pass through a strainer to remove the leaves. To take one shot after too copious or heavy meals.