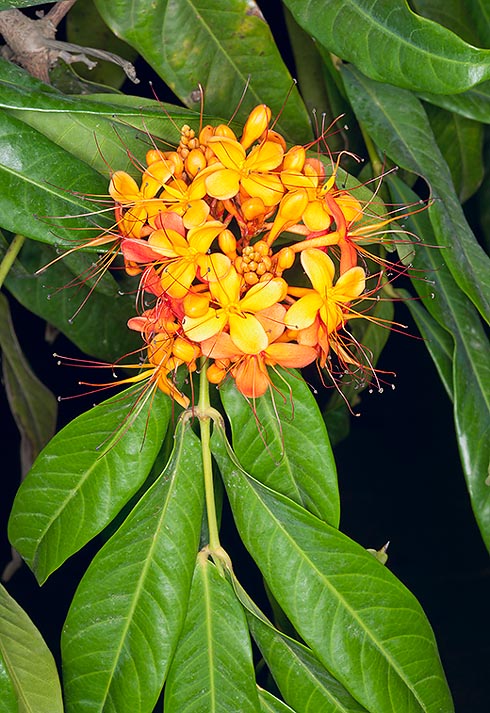 The species is native to India, Indonesia (Java and Sumatra), Laos, Malaysia, Thailand and Vietnam, where it grown in the forests up to about 900 m of altitude.

The origin of the name of the genus is uncertain, most probably it is coming from a local name; the name of the species is the Latin adjective “indicus, a, um” = of India, with reference to the presumed place of origin.

The Saraca indica L. (1767) is a shrub or small tree, evergreen, tall up to about 10 m with grey to dark brown bark, branches rather hanging and alternate even pinnate leaves, 30-60 cm long, formed by 3-7 pairs of opposite lanceolate leaflets, 8-15 cm long, sub-coriaceous, of intense green colour; the young leaves are initially of greyish to purple red colour, grouped and hanging.

Numerous inflorescences, sessile, on stem and branches (cauliflory), in corymbiform panicles with flowers without petals formed by the calyx, placed at the end of the long floral tube, seemingly formed by 4 petaloideous sepals, being the rear two merged, ovate-lanceolate, initially yellow then orange and finally red, and 7-8 long stamina united at the base in a tube; the flowers are delicately scented from dusk till dawn.

The fruits are purple woody legumes, 15-20 cm long, containing 4-8 seeds oblong-ellipsoid rather compressed. It reproduces by seed, which germinates in 4-8 weeks in sandy soil, or with addition of perlite, kept humid, at the temperature of 26-28 °C, and by cutting. Slow-growing species of huge ornamental and landscape value rightly widely diffused in parks and gardens and as road tree in the Tropics, particularly in India and Thailand. Cultivable in the tropical and subtropical climate zones, it can bear rare, and for a very short period, drops in temperature around the 0 °C.

It requires full sun or slight shade and soils from slightly acidic to neutral rich of organic substance, well drained and kept humid, adult plants can stand short dry periods. It can be cultivated in pot for the decoration of luminous greenhouses and winter gardens with lowest winter temperatures not under the 14 °C. The plant has an important role in the eastern traditional medicine, due to the presence in the various parts of the plant of glycosides, saponins, tannins, flavonoids and sterols.

Tree considered sacred by the Hindus and Buddhists, its flowers are commonly utilized in the decoration of the temples and in the religious ceremonies. The wood is used in the buildings, the fruits as fodder and from the flowers they get a dye.