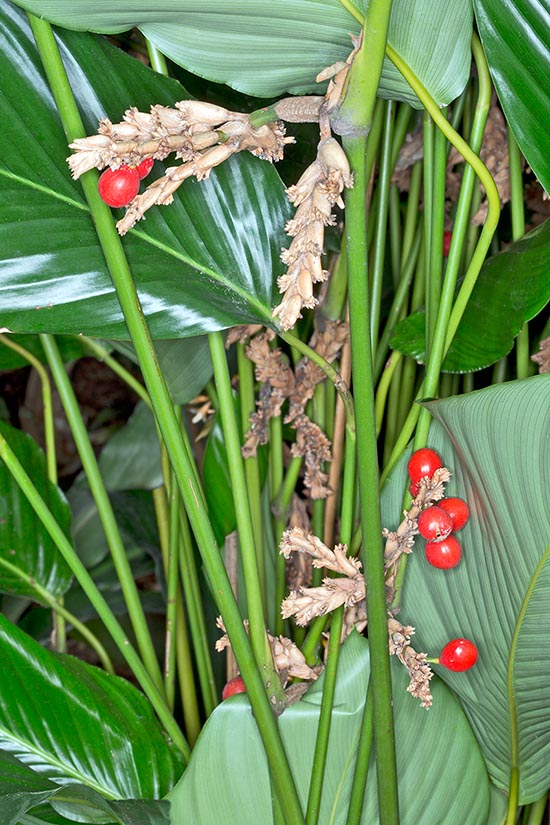 At home in Central-Western Africa, Sarcophrynium brachystachyum is a rhizomatous perennial herbaceous species that can be, along water streams, 2 m tall. Inflorescences in compact racemes and 1-1,5 cm red fruits with 3 seeds immersed in sweet gelatinous pulp © Giuseppe Mazza

The species is native to Benin, Cameroon, Central African Republic, Congo, Democratic Republic of the Congo, Equatorial Guinea, Gabon, Ghana, Guinea Bissau, Ivory Coast, Liberia, Nigeria, Senegal, Sierra Leone and Togo, where it grows in the underwood of the humid forests often along the water streams.

The Sarcophrynium brachystachyum (Benth.) K.Schum. (1902) is a rhizomatous, perennial herbaceous species, erect, with simple basal leaves, on an up to 1,5 m long petiole, elliptic to oblong-lanceolate with pointed apex and entire margin, 20-50 cm long and 10-25 cm broad.

Lateral inflorescences formed by one or more compact racemes, 5-7 cm long, sessile or on an up to 6 cm long peduncle, provided of persistent imbricate bracts, 1-2 cm long and 1 cm broad, subtending 4-5 cymes that end in a couple of flowers.

The flowers, hermaphroditic, have ovate sepals with pointed apex, 3 mm long, pinkish white or yellowish imbutiform corolla, with 2,5 mm long tube and three 9 mm long lobes, stamen and staminodes arranged in two verticils, the outer one formed by 2 obovate petaloid staminodes 8 mm long, the inner one by the stamen, 6 mm long, and two staminodes; the flowers keep open a few hours in the morning.

The fruit is a sub-globose capsule of orage red colour, of 1-1,5 cm of diameter, containing 3 angled seeds, about 1 cm long, immersed in a sweet gelatinous pulp.

It reproduces by seed, in organic draining loam maintained humid at the temperature of 24-26 °C, and by division. Species with ornamental foliage, but poorly known out from its origin zones, can be cultivated in the tropical and humid subtropical zones, in slightly shaded position, on soils rich of organic substance having ample availability of water. 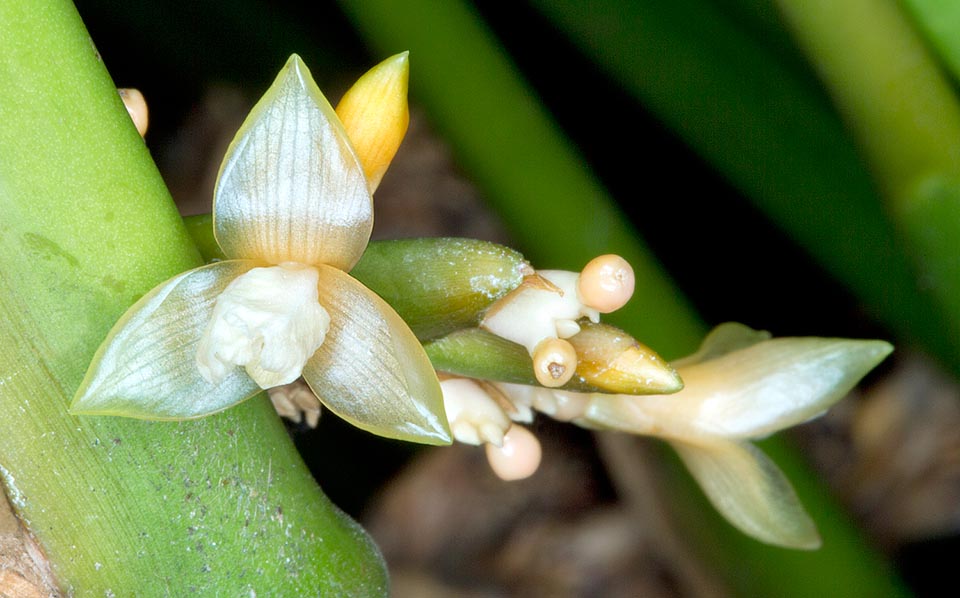 The tiny ephemeral flowers open for few hours in the morning. Seeds and rhizomes are locally used by popular medicine for lung ailments © Giuseppe Mazza

Locally the leaves are used as cover of rural dwellings and for wrapping and cooking aliments; the fibres obtained from the petioles are employed for fabricating ropes, mats, baskets, common usage objects and traps for fishes. In some of the origin zones the seeds and the rhizomes are utilized in the popular medicine for treating lung ailments.