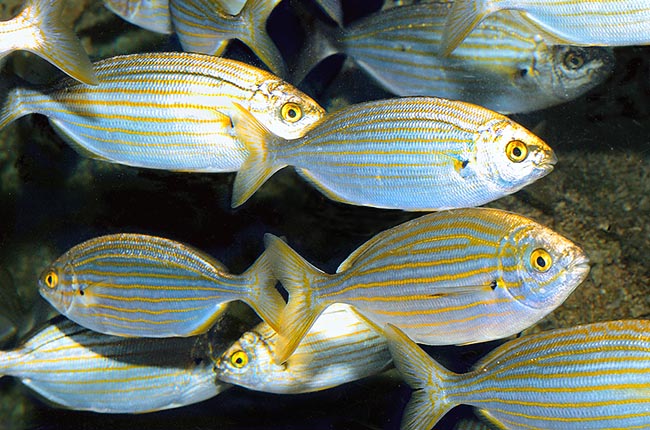 The Saupe (Sarpa salpa) is very common, but with poor flesh, toxic at times © Giuseppe Mazza

The Saupe (Sarpa salpa Linnaeus, 1758) belongs to the class of Actinopterygii, the ray-finned fishes, to the order of Perciformes and to the family of Sparidae.

The name of the genus “sarpa” comes from the Spanish “salpa” = toad.

The name of the species comes from the Latin “salpa” = fish.

In short, it is a “toad fish”, probably due to its flesh, without value and toxic during some periods of the year, as well as the secretion from the skin of the toad.

The saupe is present all over the Mediterranean Sea and on the eastern Atlantic coast, from the Gulf of Biscay to the Cape of Good Hope, including the Acores, Cape Verde, Madeira and the Canary Islands. Then, it goes northward along the Indian Ocean African coast as far as Madagascar.

It lives along the rocky or sandy coasts where the sea weeds do live, between the 5 and the 70 m of depth, even if, usually, it does not go down under the 15 m.

Usually, it measures 30 cm, but 40 cm specimens, exceeding the kilo, are not rare and there are mentions of 50 cm and 3 kg of weight. It is recognized at first side because it lives in school and shows 10-12 conspicuous yellow longitudinal stripes which, by sure don’t go unnoticed. The body is oval, with the back profile symmetrical to the ventral one, and a long dorsal fin, of almost uniform height, which has 11-12 spiny rays and 14-17 unarmed ones. The anal fin is short, with 3 spiny rays and 13-15 tender. The pectoral and the ventral ones are small, pointed, and the caudal fin is bilobed. The iris of the eye is golden, as well as the splendid stripes, in elegant contrast with the background colouration, silvery and shining. At the base of the pectoral fins, we note a small black dot. 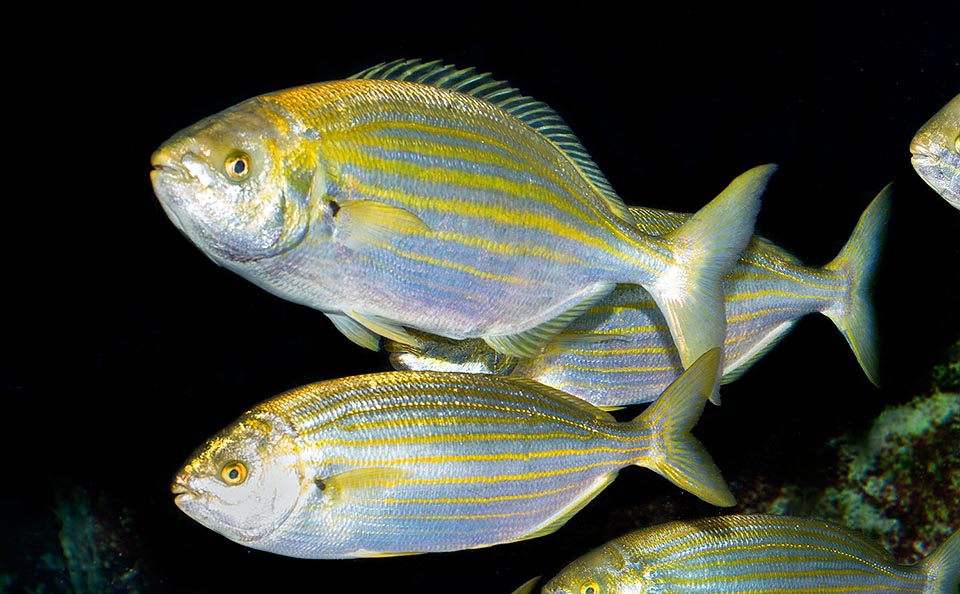 During some periods of the year, when certain toxic algae proliferate, it's unpalatable, because it causes digestive disorders and hallucinations © Giuseppe Mazza

The mouth is small, as it is convenient to an herbivore, with only one row of teeth, above and below, sharp and serrated interlocking, made just for cutting the seaweeds.

It is a markedly gregarious fish, grazing all day in dense schools, almost synchronized in the movements. They stop for mowing the heads of Sea lettuce (Ulva lactuca) and after reduced them to the minimum, the saupes leave all together, at the same time, perhaps after the nod of a leader, towards another rock to be cleaned up.

Even if, at times, along with the vegetables, they swallow some small animal, the saupe is a definitely herbivorous species nourishing of green seaweeds, brown ones and of Neptune grass (Posidonia oceanica). Only the juveniles, less than 3 cm, have a mixed diet, partly carnivorous, based on the diatoms and the planktonic crustaceans.

It is protogynous hermaphroditic, with the females which by ageing, become males, when about 25 cm long. 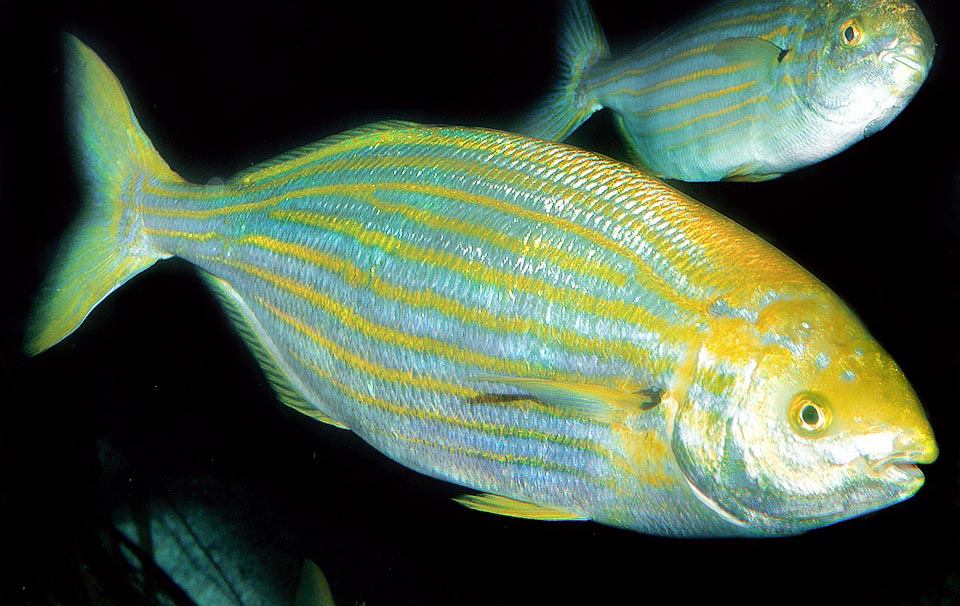 It is a protogynous hermaphroditic species, with the females which by ageing, become males, when about 25 cm long. The oldest individuals can be 40 cm long and weigh up to 1 kg, but some talk of even 50 cm and 3 kg. It’s not an endangered fish and has a good resilience: if needed, their populations can double in 1,4-4,4 years © G. Mazza

The flesh is of poor quality, with the taste often muddy and full of spines, but especially, in certain periods of the year, when some toxic seaweed proliferate, it is not edible, because causing digestive disorders and hallucinations. This a phenomenon already known to the old Romans, which recently has increased with the expansion in the Mediterranean of a toxic seaweed, the Caulerpa taxifolia. The symptoms of the poisoning are nausea, vomit, vertigoes, deliria and auditory and visual hallucinations, with imaginary monsters. The effects, usually, disappear after a couple of days, but amnesia phenomena at times do persist.

If, after having fished it, we want really to eat a saupe, for our pleasure, in the hope that we are in the right period, we must in any case eviscerate it immediately, thus eliminating the visceral sac with the intestines full of seaweed in fermentation, in order not to further contaminate the flesh.

The vulnerability index of this species is of 41 over 100.