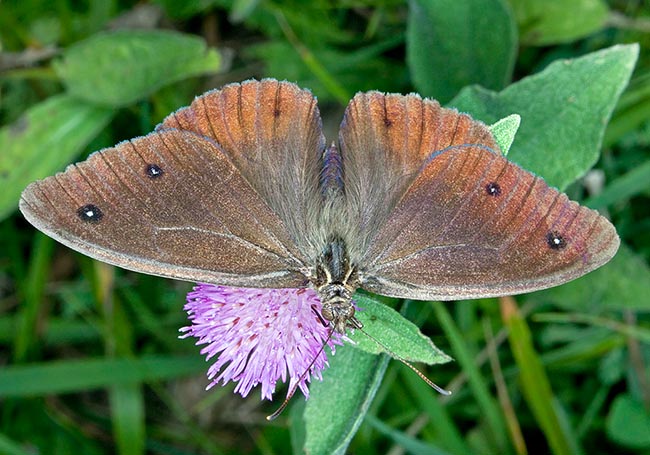 The Great sooty satyr (Satyrus ferula Fabricius, 1793 is an elegant butterfly belonging to the order Lepidoptera, family (Nymphalidae), subfamily Satyrinae and is known in Italy as Satiro comune.

The genus Satyrus was created by Latreille in 1810 and comes from Satyros, satyr, male mythical character, who accompanied Pan and Dionysus, having the appearance of half man and of half goat.

The genus included most of the members of the subfamily.

The name of the species, ferula, comes, conversely, from the giant fennel-stalk, herbaceous plant into whose roots Prometheus hid and kept the heavenly fire stolen from Apollo’s carriage.

Two species of Satyrus exist in Europe: Satyrus ferula and Satyrus actaea, that, in some areas of France and of Spain overlap their range. The subspecies Satyrus ferula atlantea Verity, 1927, lives in Morocco (Meknes), in mountain habitats from 1500 to 3000 m of altitude (synonym: meknesensis Strand, 1927). The species Satyrus ferula ferula has been described by Fabricius in 1793, with typical localization in Italy.

The female, clearer, distinguishes at once due to the yellowish spot around the ocelli © Giuseppe Mazza

In Italy it is present along all the Alpine range and in the Apennine up to Aspromonte.

Satyrus ferula is present from the hilly zone (400 m) up to about 1600 metres of altitude. At lower altitudes it loves the woods clearings, whilst at the higher ones willingly frequents grassy slopes, often rocky. It is generally considered as xerothermophilous, that is linked to open calcareous habitats. The caterpillar is oligophagous and lives at the expenses of Poaceae, in particular Festuca ovina, Deschampsia cespitosa, Stipa pennata and Stipa capillata. 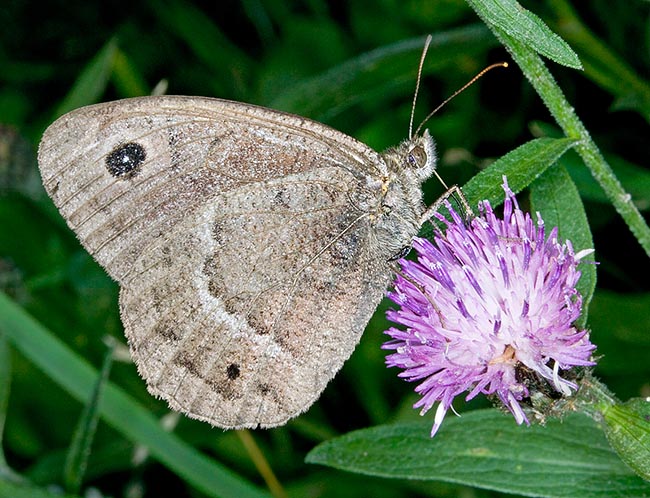 This species has a vast diffusion, from Morocco to China, and loves the hilly sites up to 1600 m of altitude © Giuseppe Mazza

In Greece and in Switzerland it has been observed that the host plant is mainly the Festuca ovina.

It is a butterfly rather localized that prefers arid and rocky meadows in the mountains and in the flattest zones of its range frequents also woody areas.

The adult loves to perch on the flowers of pinkcushion, knautia, thistle, centaureas and eupatoria.

The wingspan is of about 46-60 mm. This species shows an evident sexual dimorphism.The male has the background colour of the wings brown with two white pupilled ocelli on the back of the fore wings. The female is clearer, with a yellowish spot around the ocelli. The female, moreover, has some white dots on the right and the reverse of the forewing.

Satyrus ferula is similar to two other species, also belonging to the subfamily Satyrinae: one of these is Minois dryas. The ocelli of Satyrus ferula are however white pupilled, instead of blue. The other similar species is Satyrus actaea, Esper, 1780. This one is met in south-western Europe and in Asia. The indications relating to the Canton Ticino, Switzerland (Vorbrodt, 1911; Higgins & Riley, 1970) are not confirmed. 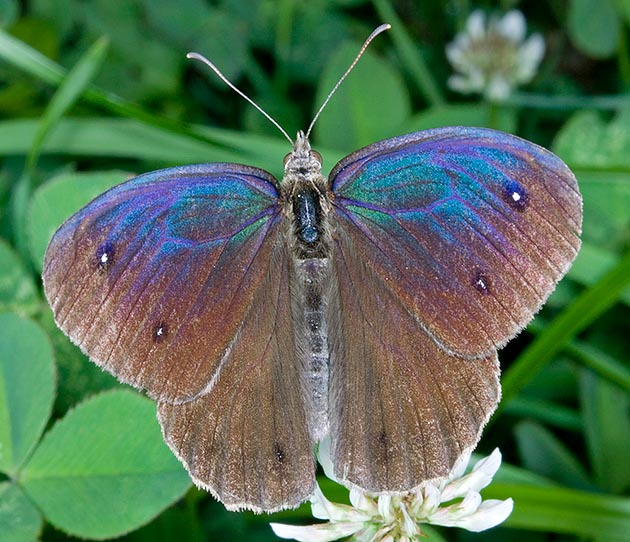 The wingspan can be of 60 mm and the angle of the light on the dark brown background of the males can create astonishing colours. The caterpillar lives at the expense of plants of Poaceae family © Giuseppe Mazza

In Satyrus ferula the male does not have the androconial spots on the forewing as in Satyrus actaea. The androconia, present only in the male, are groups of elongated scales that are in strict communication with glands of the epidermis in charge of the secretion of odorous substances.

This butterfly has only one annual generation. It hibernates at the stage of caterpillar. The eggs are laid from July to September.

The egg, of milky colour when laid, becomes slightly grey after some days. Its height goes from 1,4 to 1,5 mm with a diametre of 1,1 mm and has 12 to 14 grooves. The egg is laid singly even directly on the ground, over the dried leaves, close to the host plant.

The species hibernates at the stage of caterpillar. The stage of chrysalis lasts about two months, the adult flies from mid June to early August.

The caterpillar, as previously said, lives at the expense of Poaceae. When it does nourish keeps sheltered at the foot of the host plant.