The species is native to Ecuador where it grows on the trees of the humid forests on the Andean eastern slopes between the 500 and the 1500 m of altitude.

The name of the genus is the combinaiton of the Greek substantive “σκάφος” (scaphos) = cavity and of the modern Latin substantive “sepalum, i” = sepal, with reference to the cavity formed by the lateral sepals united for a large part; the specific name is the Latin adjective “ovularis, e” = ovular, from “ovulum, i” = small egg, with reference to the shape of the flower.

The Scaphosepalum ovulare Luer (1976) is an epiphytic species with short stems provided at the apex of one single petiolate leaf, erect, ovate-elliptic with sharp apex, 1-4 cm long and about 0,5 cm broad, of pale green colour, coriaceous. Racemose inflorescences, initially ascending, then drooping, bearing several tiny flowers not resupinate (with the labellum up over the column), of waxy consistency and yellowish colour with extended dark red maculae, about 6 mm long and of 4 mm of diameter, opening gradually on the filiform rachis for months or even for years. 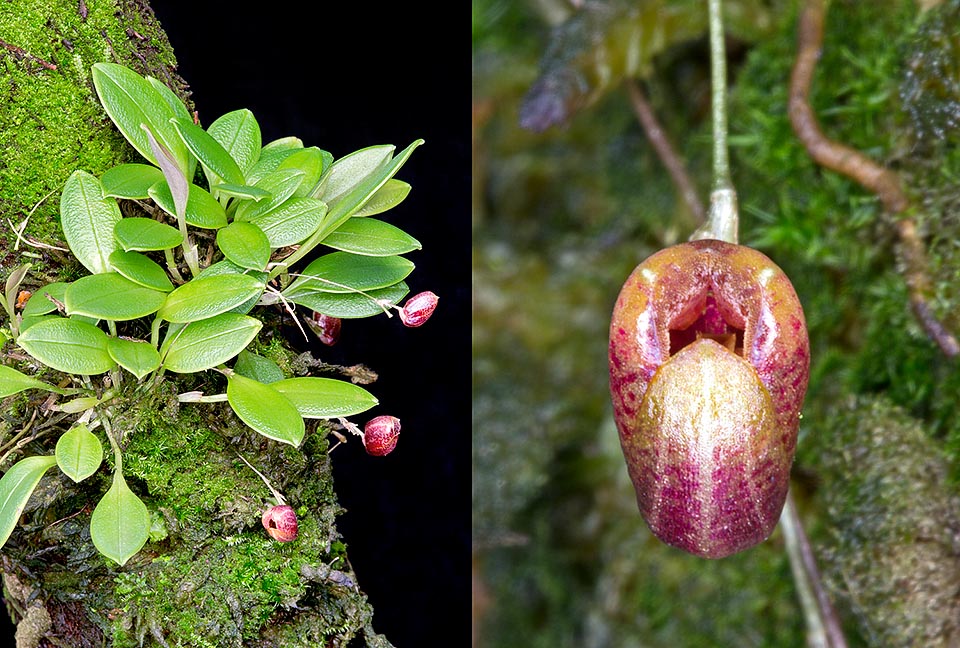 Miniature orchid with 6 mm ovoid flowers, Scaphosepalum ovulare is an Ecuador epiphyte where it grows on Andean eastern slopes between 500 and 1500 m of altitude © Giuseppe Mazza

The lateral sepals united almost up to the apex, form together with the dorsal sepal a cavity shaped like an egg with a very small opening for the entrance of the pollinating insect, inside which are located the petals, the trilobed labellum and the column.

It reproduces by seed, in vitro, and by division.

Miniature orchid with unusual flowers, requires a shady position, intermediate temperatures, 18-26 °C, with lowest winter night values not under the 12 °C, high humidity, 70-90%, and constant ventilation; the flowering induction is favoured by a daily temperature range of 5-8 °C. The waterings and the nebulizations must be regular in way to maintain constantly humid the substratum, but without stagnations, utilizing rain water, demineralized or by reverse osmosis. It can be mounted on trunks, pieces of bark or rafts of cork or of arborescent ferns, with sphagnum at the base in order to maintain the humidity, or positioned in small pots with compost formed by fragments of bark and charcaol of small or medium size and sphagnum. Transplants and repottings, when necessary, are to be done at the vegetative restart.