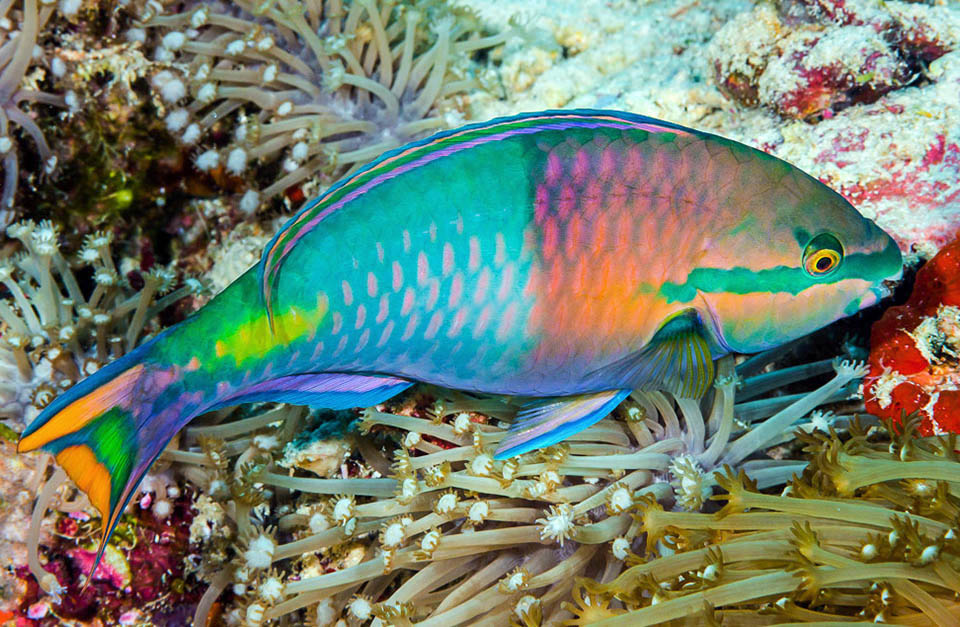 Only recently described, Scarus flavipectoralis lives in the central-western Pacific. Here a male, with its incredible colour combinations © François Libert

Described only recently, the Yellowfin parrotfish (Scarus flavipectoralis Schultz, 1958 ) belongs to the class of Actinopterygii, the ray-finned fishes, to the order of Perciformes and to the family of Scaridae that counts about ten genera and one hundred species.

The generic term Scarus in Latin designated a Mediterranean edible fish, known also to the Greeks as “σκάρος” (skáros), and of which Aristotle talked as “a ruminant fish” due to its restless chewing of the food with its pharyngeal teeth.

That was Sparisoma cretense, as there are no other parrotfishes in the Mediterranean and that by that time did not exist Lessepsian species because the Suez Canal had not yet been dug. 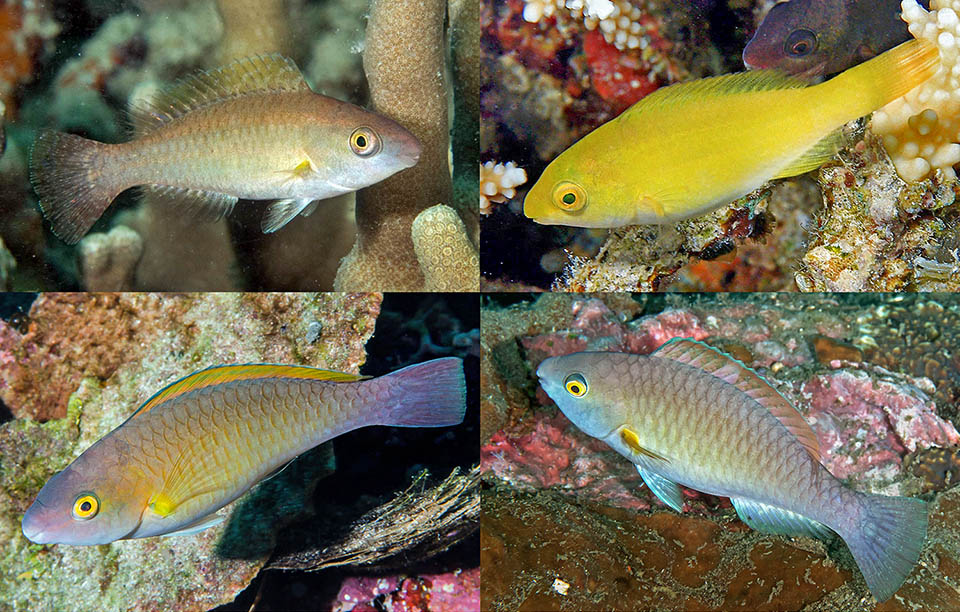 Conversely, the specific term flavipectoralis reminds us in Latin that the pectoral fins are yellow, a detail that goes almost unnoticed as in the males it is covered up by their gaudy colours.

The Yellowfin parrotfish lives in the central-western Pacific. Indicatively, we find it along the coasts of Vietnam and of the Philippines, in the Palau Islands, in Indonesia, Timor-Leste, Australia, Papua New Guinea, Micronesia and Marshall Islands, Solomon Islands, New Caledonia and Niue Islands. Recently, it has been found even in Tonga. 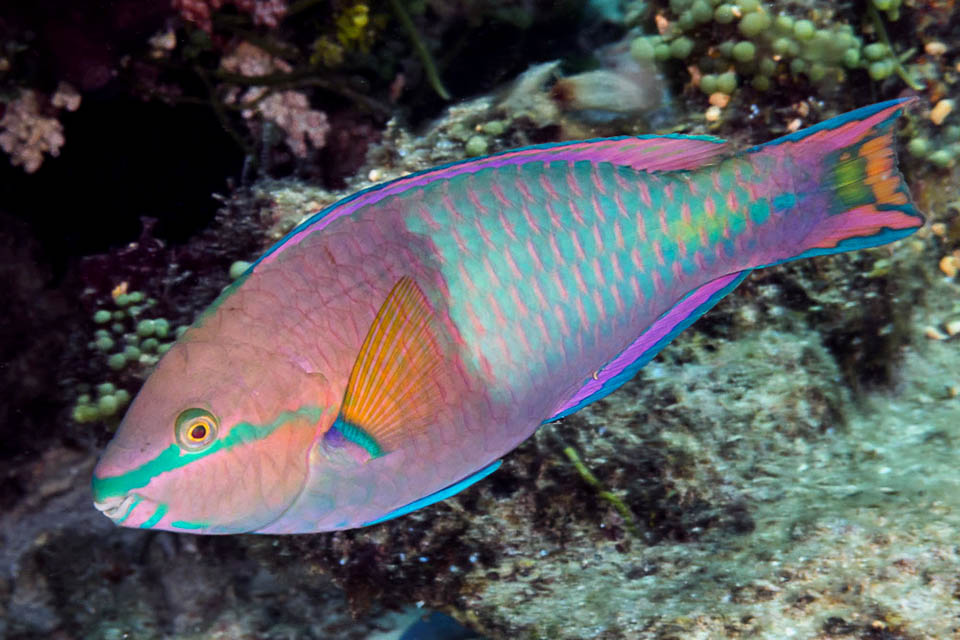 This is the young male’s pink phase. To note the green band starting from the upper lip and crossing the operculum. They will keep it forever © François Libert

Even if Scarus flavipectoralis has been reported at around the 40 m of depth, it is usually a diurnal benthopelagic fish present in shallow waters, mostly between 2 and 20 m.

It can be found in madreporic environments but also on the sandy bottoms close to seagrass meadows or rocks covered by algae. As a matter of fact, it is a vegetarian fish that eats the encrusting algae infesting the reef without ignoring the more consistent ones, the phanerogams, including the mollusks and the crustaceans that have the bad luck of being present among the foliage and the live polyps of the madrepores, rich in tiny symbiont algae, it gulps down greedily together with their substratum. 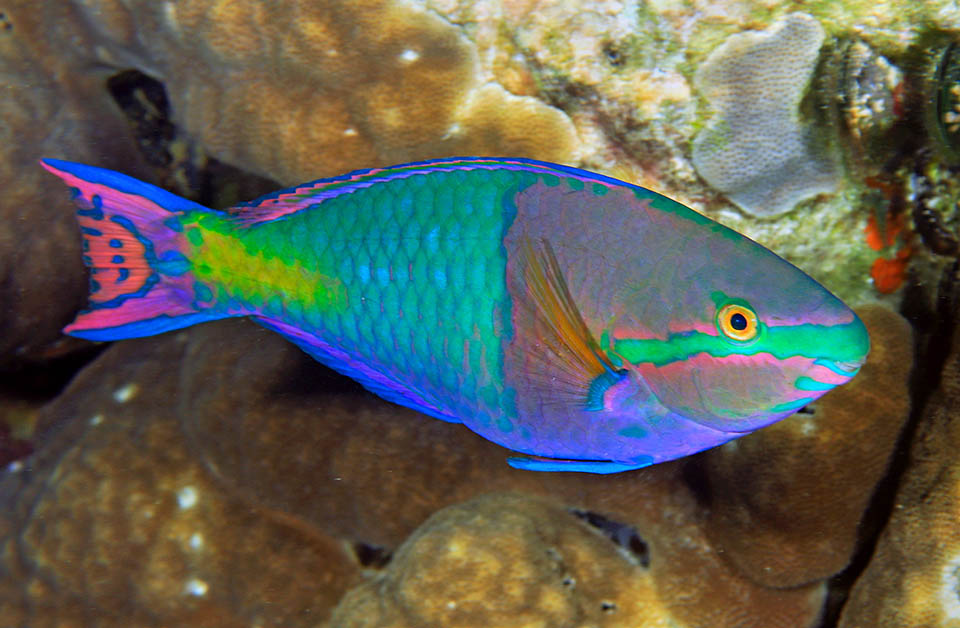 Here the scales vertical hatching has disappeared, the colours are stronger, but above all is clearer the chromatic separation that breaks vertically the fish in two parts © Keoki Stender

All this, as usual among the parrotfishes, is then ground for a long time by the solid pharyngeal teeth and the waste, after a long intestinal journey, is the candid madreporic sand that adorns the tropical beaches.

The body, compressed laterally, is ovaliform with a white rostrum almost completely covered by the lips. The males in terminal phase display, in the corner of the mouth, on both sides, 2 protruding canines at the bottom of the lower dental plate and one on the upper one. 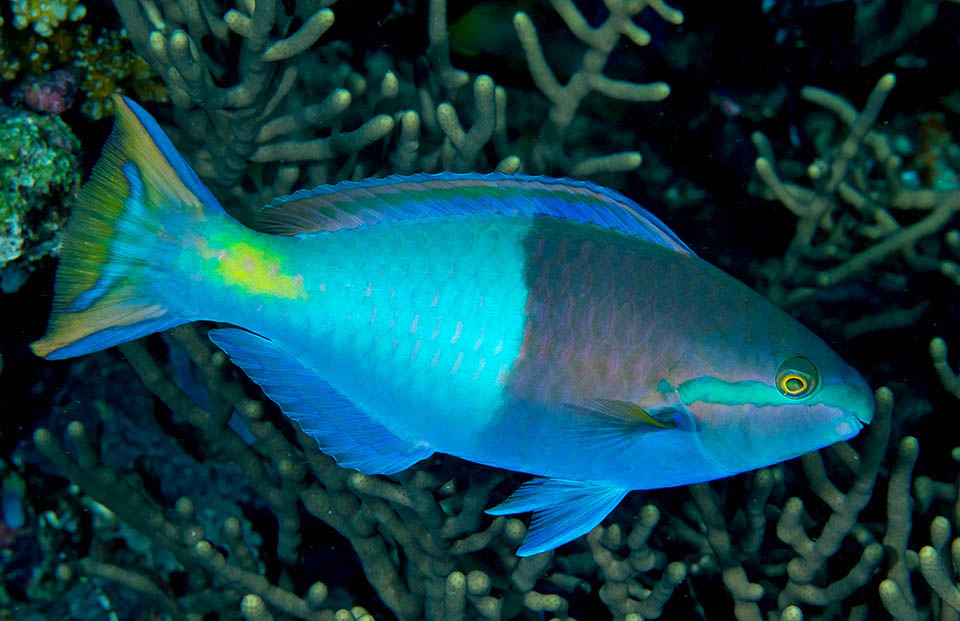 In this blue version the mimetic break is even sharper. The yellow dot in the caudal peduncle has intensified © Rickard Zerpe

The males are always bigger than the females, as Scarus flavipectoralis is a protogynous hermaphrodite species, that is with females that, once exceeding a certain size, transform into males. They exceptionally can reach 40 cm, but generally they slightly exceed 20 cm.

After the intermediate phase they easily distinguish from the females, yellowish grey with clear belly, due to their lively colours.

They have a green horizontal band that goes from the snout to the pectoral fin, touching the base of the eye, emphasized by a thin dark border followed by a band having the complementary colour. The livery of the body is then vertically broken in two. The fore part can be very dark, but even orange or pinkish with hatchings of analogous colour on the fins and the scales adorned by vertical bands, whilst the second half is clear tending to emerald, green or turquoise. 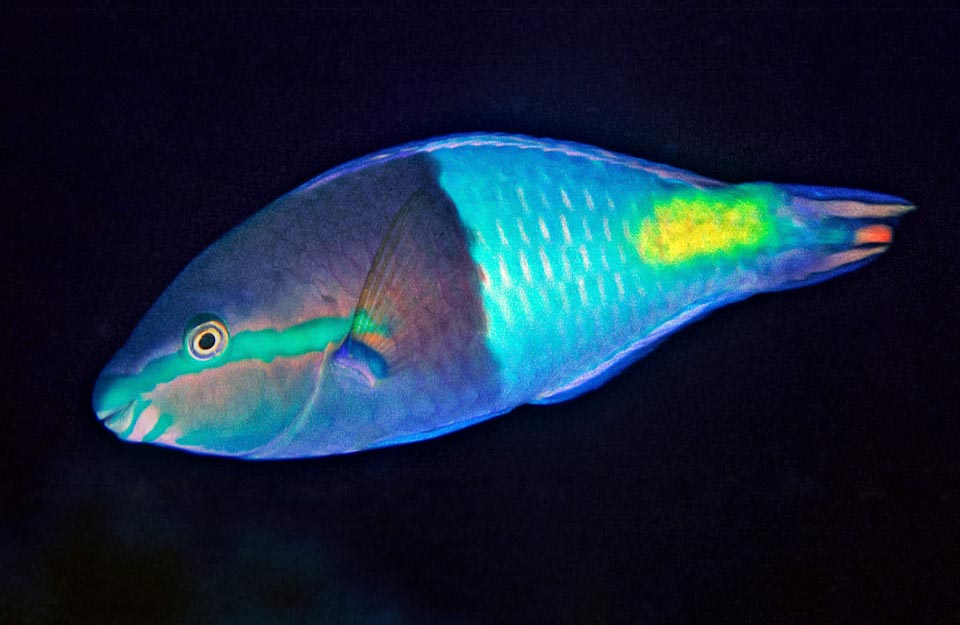 Here the contrast is maximum. The strong yellow spot, typical to old males, serves as a fake eye for directing the predators to an elusive and not vital area © Keoki Stender

At the base of the yellow pectoral fins stands a small black speckle. They are translucent and the lower part of the rays has a greenish blue narrow band. Moreover, the senior males have a luminous yellow spot towards the caudal peduncle.

Little is known about the life of this fish. The couples entrust the fecundated eggs to the waves and the larvae are also pelagic. The resilience is good, with a possible doubling of the populations in less than 15 months and nowadays, in 2021, the vulnerability index of the species is low, marking only 26 on a scale of 100.