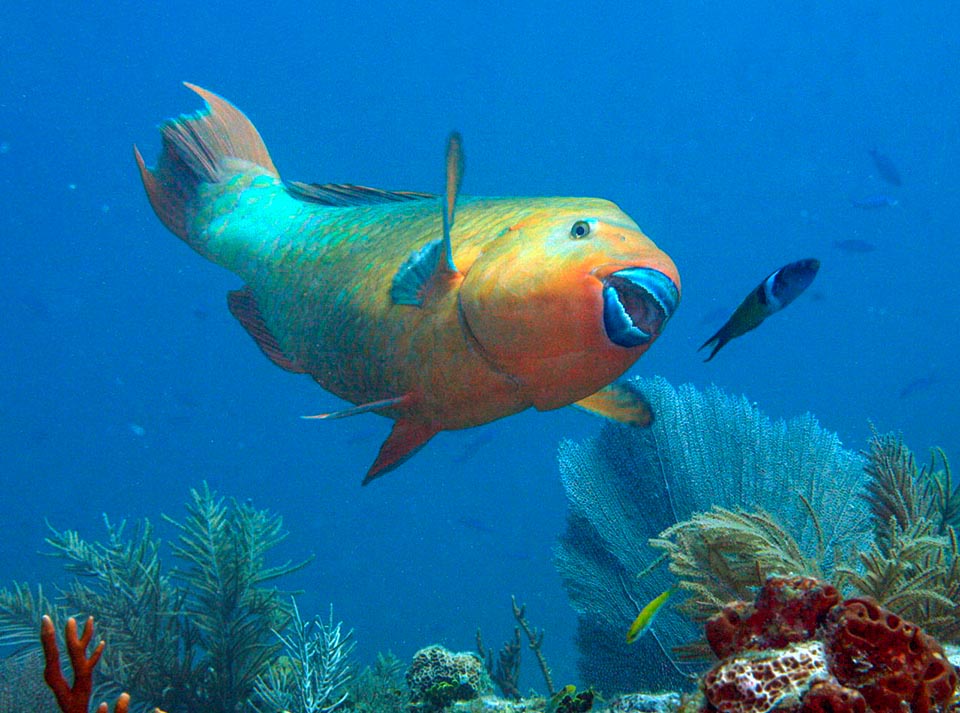 With a vast distribution in western Atlantic, Scarus guacamaia can be 120 cm long and is the biggest herbivorous fish in the Caribbean © Kevin Bryant

The Rainbow parrotfish (Scarus guacamaia Cuvier, 1829) belongs to the class of the Actinopterygii, the ray-finned fishes, to the order of the Perciformes and to the multi-coloured family of the Scaridae, the parrotfishes, counting about ten genera and about hundred species.

The etymology gets its origin from the vulgar names: Scarus in Latin indicates, as well as in Greek  “σκάρος” (skáros), an edible fish of the Mediterranean, whilst guacamaia is the Latinization of “guacamaya”, the name with which the Cubans call this fish, that is, after all, the name with which the Spaniards use for the Ara macaws, characterized, they too, by a huge beak and bright colours. 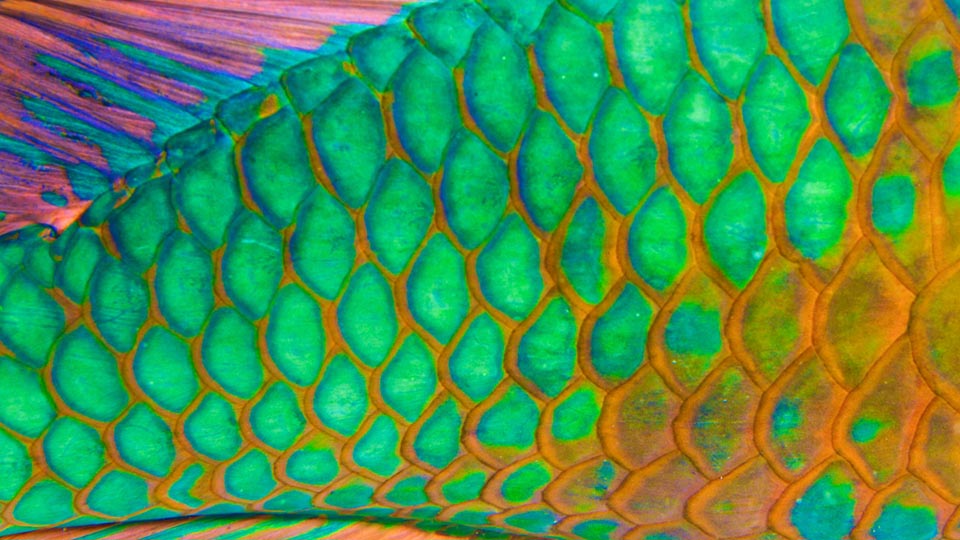 The big multicoloured scales have valued it, rightly, the name of Rainbow parrotfish © Allison & Carlos Estape

The Rainbow parrot fish has a very vast distribution in the tropical waters of the western Atlantic.

Indicatively, starting from Bermuda, we find it in Florida, in the Bahamas, in the Turks and Caicos Islands, Cuba, Belize, Guatemala, Honduras, Nicaragua, Costa Rica, Panama, Cayman Islands, Jamaica, Haiti, Dominican Republic, Puerto Rico and in all islands of the Caribbean Sea up to Colombia, Venezuela, Guyana and Suriname, then going down along the coasts of Brazil up to Argentina. It is absent only in the northern part of the Gulf of Mexico. 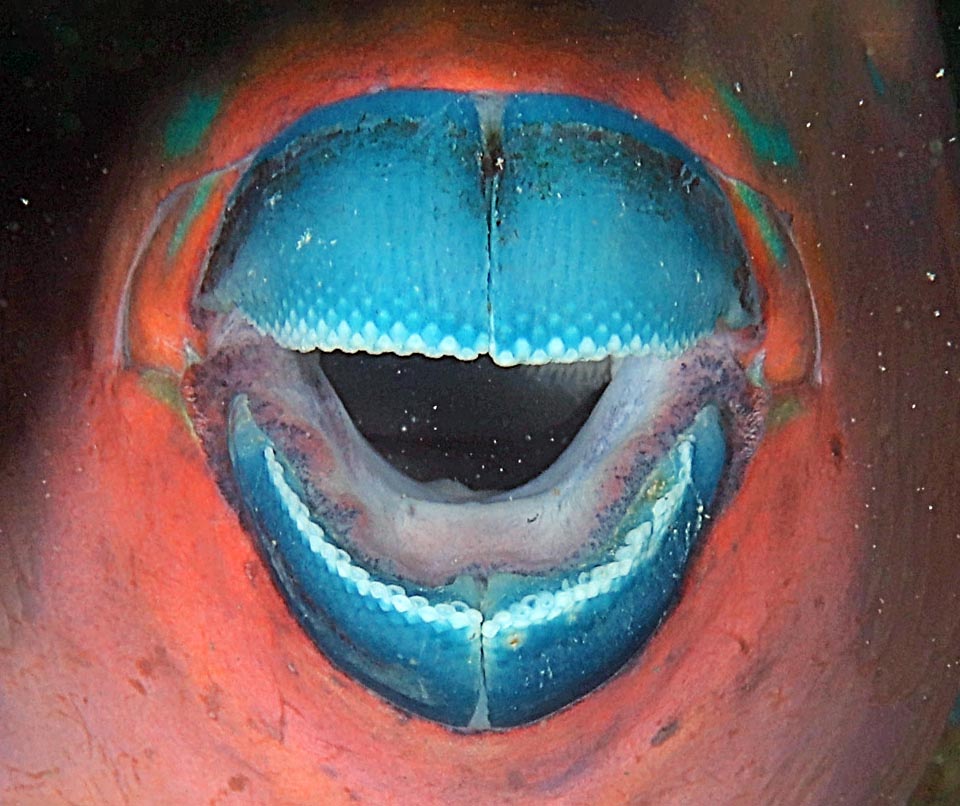 Scarus guacamaia goes swilling in relatively shallow waters, between 3 and 25 m of depth. It lives in madreporic environments, but also in the seagrass meadows and on the sandy bottoms, that it feeds gnawing all day the old madrepores infested by encrusting algae. It takes them off with its beak, swallowing them with part of the substratum and grinds them for a long time, thanks to the pharyngeal teeth, to aid their digestion. In this way, in fact, it is a very important producer of coral sand.

Conversely, the young grow up among the roots of the mangroves, an indispensable environment for their reproduction and their survival. In fact, where these formations have been disturbed by man, the Rainbow parrotfish has disappeared or is in strong decrease. 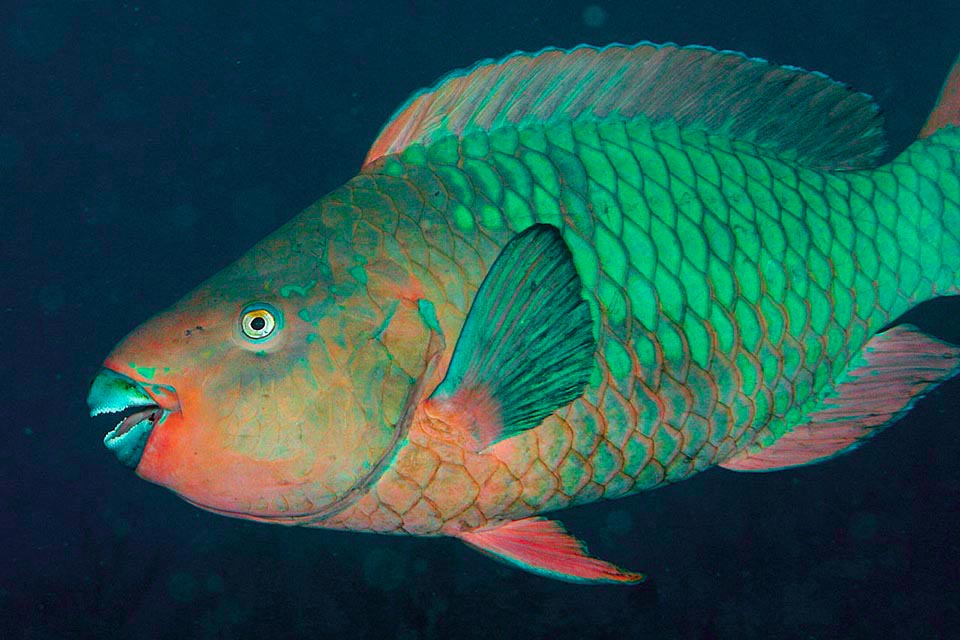 Moreover, the inside mouth inside is covered by pharyngeal teeth, similar to molars, arranged in more rows © Kevin Bryant

Albeit its normal size is about 70 cm, Scarus guacamaia can reach the length of 120 cm and 20 kg of weight and is the biggest herbivorous fish in the Caribbean.

The beak is formed by the incisors, fused together on both jaws to form two enormous solid greenish blue plates with serrated edges, and the pharyngeal teeth, like molars, arranged in more rows. The thing had not escaped Aristotle who, talking of a Mediterranean parrotfish, the Sparisoma cretense, considered it, as is the case for the bovines, a “ruminant fish”. 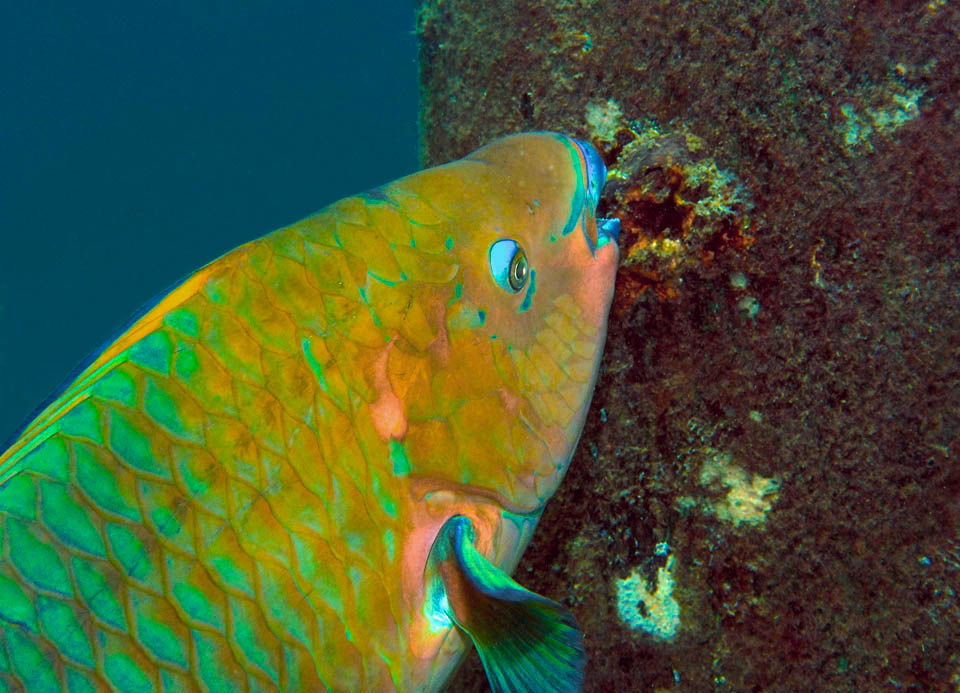 Here at work. It scrapes at the root the encrusting algae and grinding them with the substratum is also an important maker of coral sand © Pauline Walsh Jacobson

There is not an evident sexual dimorphism, but the colour and at times the sex change with age. It can be said that during their growth these fishes pass through three phases. The first is the juvenile one, with a greyish livery. In the second, with moderate tones, the colours appear. Males and females, sexually mature, have the same look: showy liveries where are not missing, in elegant combinations, the red, the orange, the green, the blue and the turquoise. 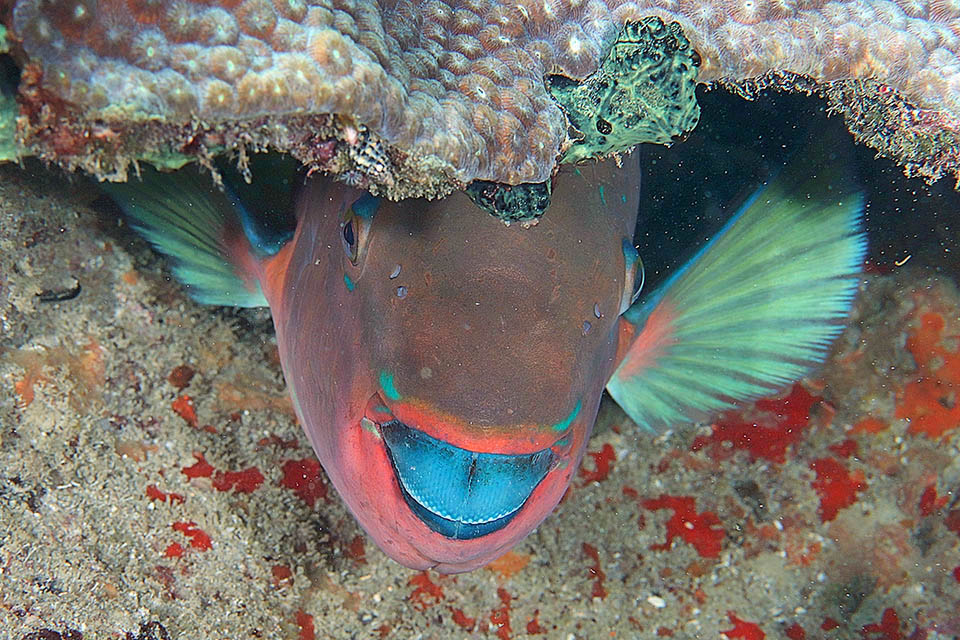 It’s a diurnal animal that every evening, after grazing, goes to its den orienting with the sun. A safe abode where it spends the night and shelters quickly in case of danger © Kevin Bryant

During the third phase, the dominant males are distinguished for their imposing size and more intense and stronger colours, with the head, the fins and the fore part of the body tending to dark red and what remains to green or turquoise.

They can be as such from the birth or females that have changed sex because the dominant male, who controlled a small harem driving out the competitors, has passed away. It is up to it to fecundate in turn the females ready to lay, even if at times some smart boys, disguised ad females with a deliberately inconspicuous livery, sneak into the harem to emit, furtively, their gametes on the eggs dispersed by the current. 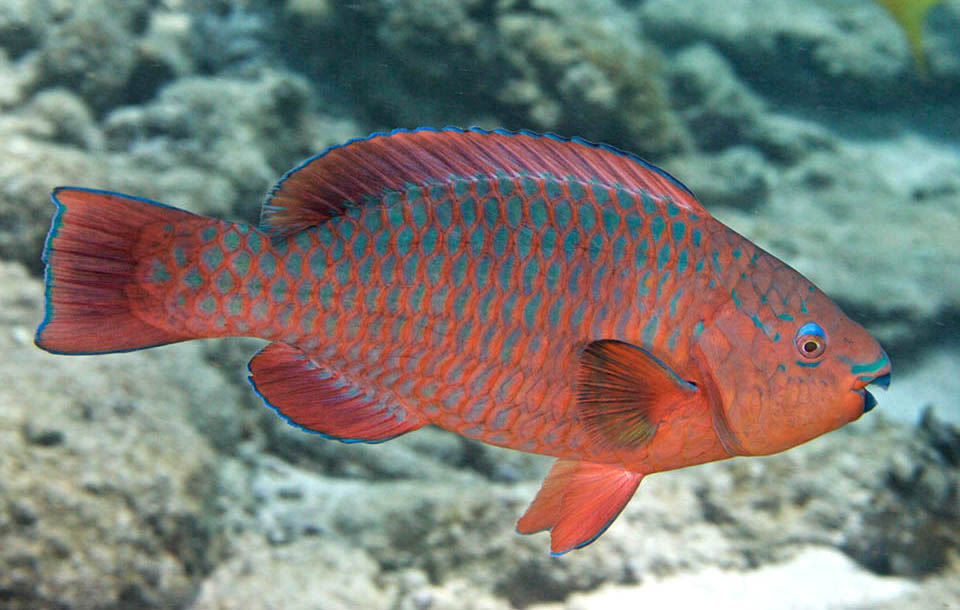 Livery does not display a clear sexual dimorphism, but colour and at times also sex change with the age © Allison & Carlos Estape

In this way, even if the fecundation is however a fact of the couple, the progeny is in the same time fecundated “ad maiora” by the strongest smarter individual.

The Rainbow parrotfish nourishes almost exclusively of the algae that encrust the old madrepores, but it has been seen also cleaning the jetties nibbling the sponges. 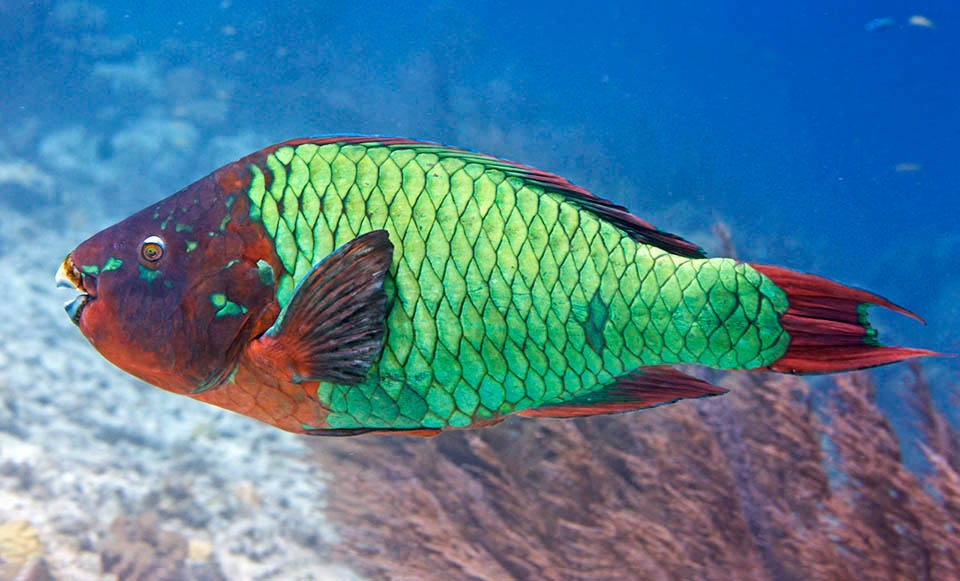 Initially the livery is greyish, then colours get out, and finally the fore part of the body tends to dark red and the rest to green or to turquoise © Allison & Carlos Estape

It is a diurnal animal that every evening, after grazing, gets back to its den orienting itself with the sun. A safe abode where it spends the night and towards where it runs to take refuge in case of danger.

The deposition, in mid-water, usually takes place where the currents head towards the mangroves formations that offer larvae and small fishes a safe shelter, far away from predators and rich in food resources.

The juveniles grow up, most exclusively, among the roots of these plants that they leave starting from the 10 cm of length, with a lifespan of about 20 years. 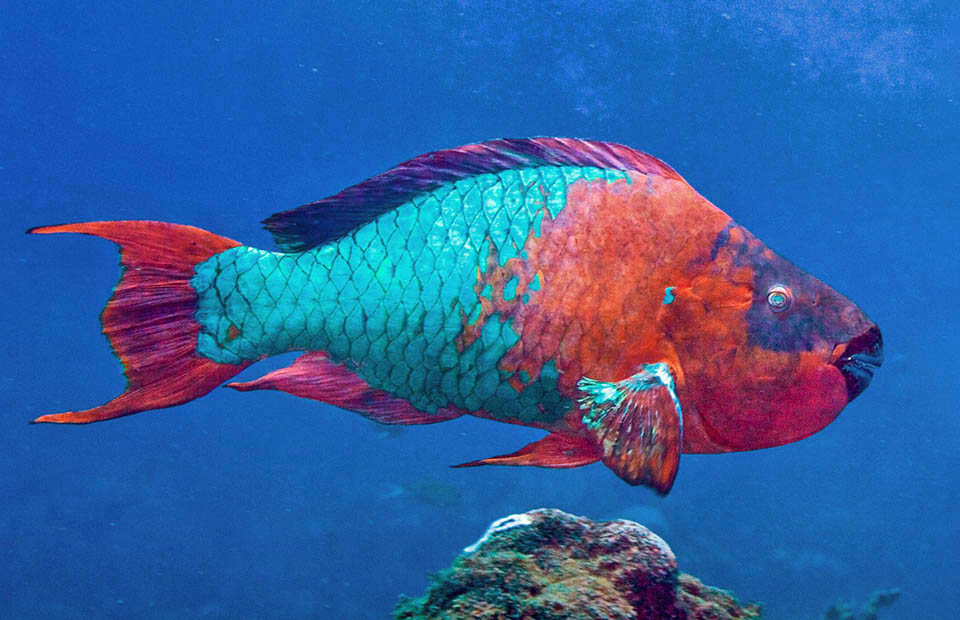 So, the further we get from the mangrove forests, the more the number of the Rainbow parrotfishes decreases, but in return they increase their size. Offshore we do not find individuals shorter than 20 cm and the biggest specimens at times go swimming in faraway reefs, even 40 km far.

Although splendid, Scarus guacamaia is not hunted as aquarium fish. Given the size, it might be theoretically hosted by the large public aquaria, but without a continuous renewal of madrepores encrusted by algae to scrape, the merged teeth forming the beak would inevitably grow out of proportion compromising their existence.

Conversely, the Rainbow parrotfish is locally fished for the local consumption, even if in some locations or seasons, depending on the algae it nibbles, its flesh may aver toxic, at risk of ciguatera, a serious food poisoning. 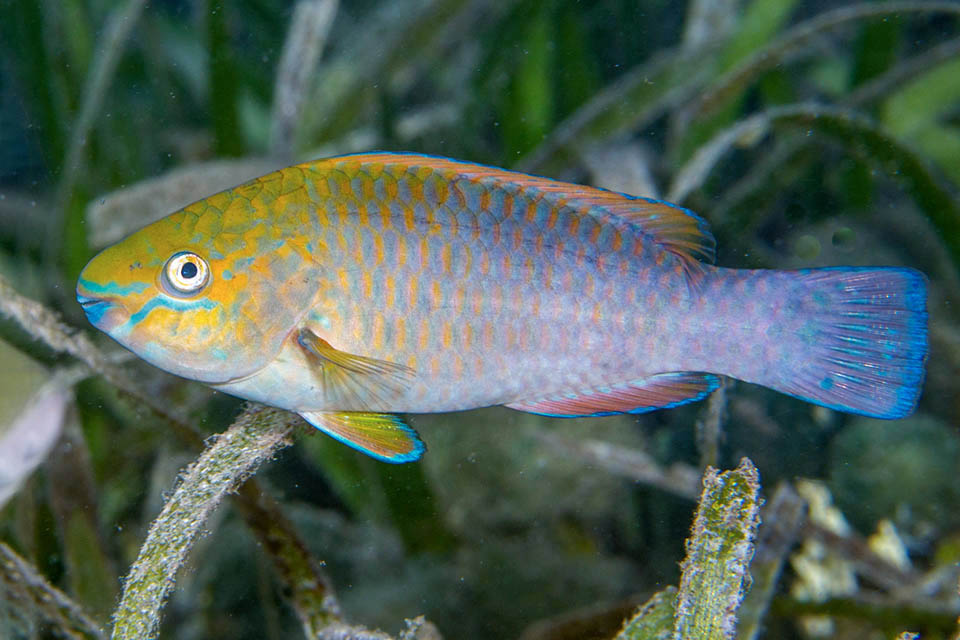 Juvenile beginning to colour. The small fishes grow up among the mangroves roots and where these disappear the species decreases quickly © Allison & Carlos Estape

In the places where the mangrove forests have disappeared due to the urbanization or the oil researches, Scarus guacamaia has disappeared or is in clear decline even if nowadays, in 2021, the resilience is not bad with a possible doubling of the populations in 1,4-4,4 years.

Hence, though in some sites the species is in danger, in the whole, seen also its huge diffusion, the vulnerability index still keeps moderate, marking 42 on a scale of 100.