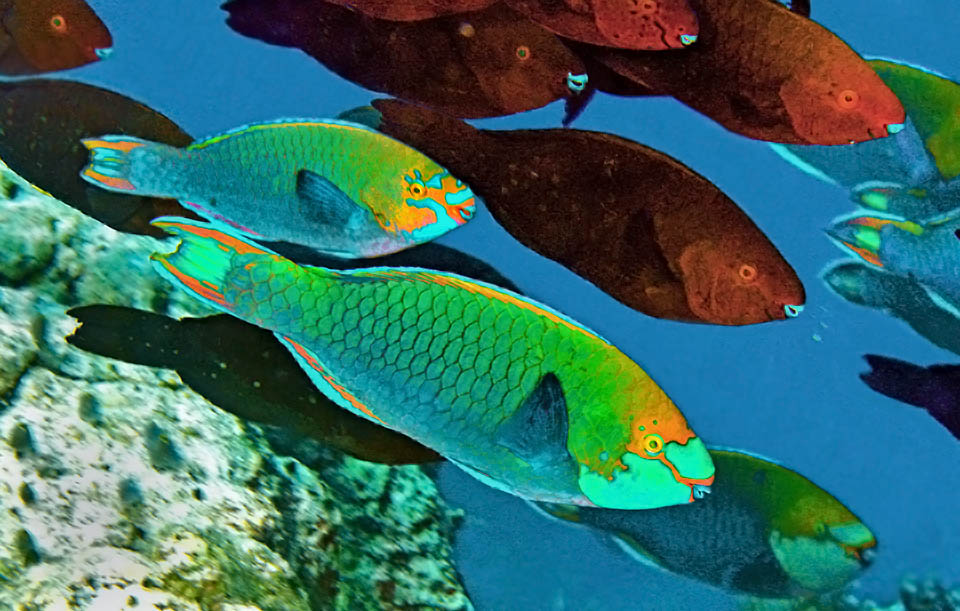 Scarus prasiognathos school with one male on foreground and unusually intense red females. The male on top belongs to a similar species © Keoki Stender

Scarus prasiognathos Valenciennes, 1840,   known as Greencheek parrotfish or as Singapore parrotfish because of the synonymous Scarus singaporensis Bleeker 1852, is a species belonging to the class of the Actinopterygii, the ray-finned fishes, to the order of the Perciformes and to the multicoloured family of the Scaridae that has deceived more than one taxonomist.

These extraordinary transforming fishes, that nowadays count about ten genera and a hundred species, in fact change frequently look, with females that while growing wear the males colours, intermediate liveries, mimetic liveries and night ones, not to forget those quick changes linked to the emotions, a sort of language that may be able to express relaxation, fear, threat and marriage proposals. 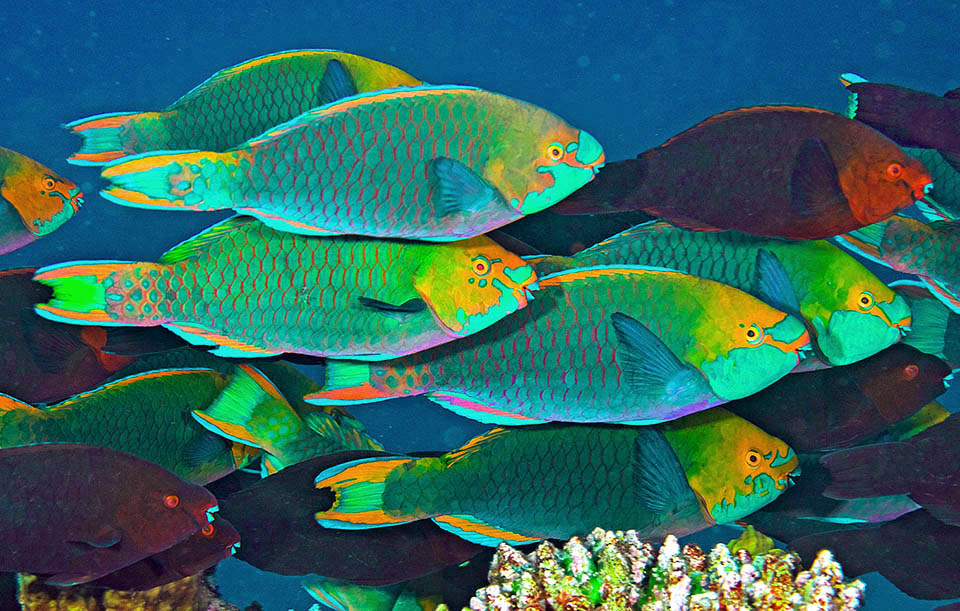 In fact, it is not rare that to the often numerous schools of the Greencheek parrotfish add other grazing species © Keoki Stender

The generic term Scarus originates from the common name used by the Romans and the Greeks, with Aristotle who talked about one ruminant edible fish, “σκάρος” (skáros), who chewed and chewed again the food in the mouth, presently taxonomically known as Sparisoma cretense, the only parrotfish existing in the Mediterranean. 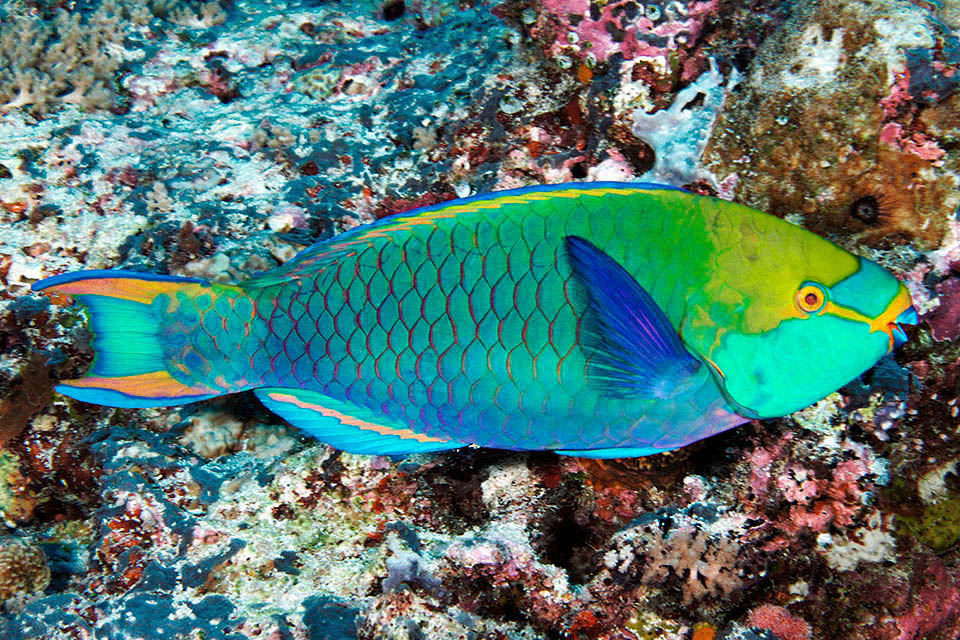 The Greencheek parrotfish lives in the tropical Indo-Pacific.

Indicatively, starting eastwards from the Seychelles, can be found in the Chagos Islands, Maldives and India. Then in the Andaman Islands, Thailand, Cambodia, Malaysia with Singapore, Cocos Islands, Christmas Island, Indonesia, Timor Leste, Papua New Guinea and Australia. Further north, we find it in the waters of the Philippines, in Vietnam, China, Taiwan, Ryukyu Islands and along the southern coasts of Japan. Eastwards, after Palau, is present in Micronesia, Niue, Tahiti, French Polynesia and Tuamotu Islands. 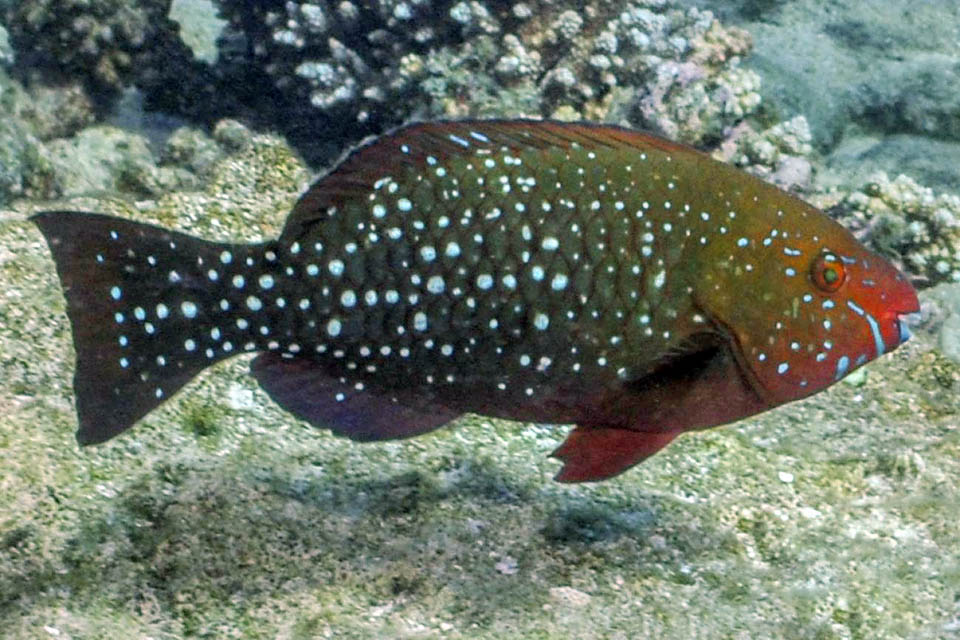 This is the mutable livery typical to the females, but as the author of the photo states the dotted mimetic drawing could be absent one minute before the shot © Rick Stuart-Smith, Reef Life Survey

Shallow waters benthopelagic diurnal fish, Scarius prasiognathos lives usually between 1 and 24 m of depth. It can be found, isolated, but often goes swimming in great mixed schools of males, females and other species that have joined the group.

It mainly frequents the madreporic environments, where it takes off at the root the polyps of the corals rich in zooxanthellae, their microscopic symbiont algae. It gulps down these anthozoans with the substratum as it does for the encrusting algae growing on the dead corals. The whole is then ground for a long time by the solid pharyngeal teeth and transformed into candid madreporic sand after a long intestinal journey.

It grazes all sorts of algae and the phanerogams growing in the seagrass meadows without ignoring, if it’s the case, the small invertebrates living among the foliage. 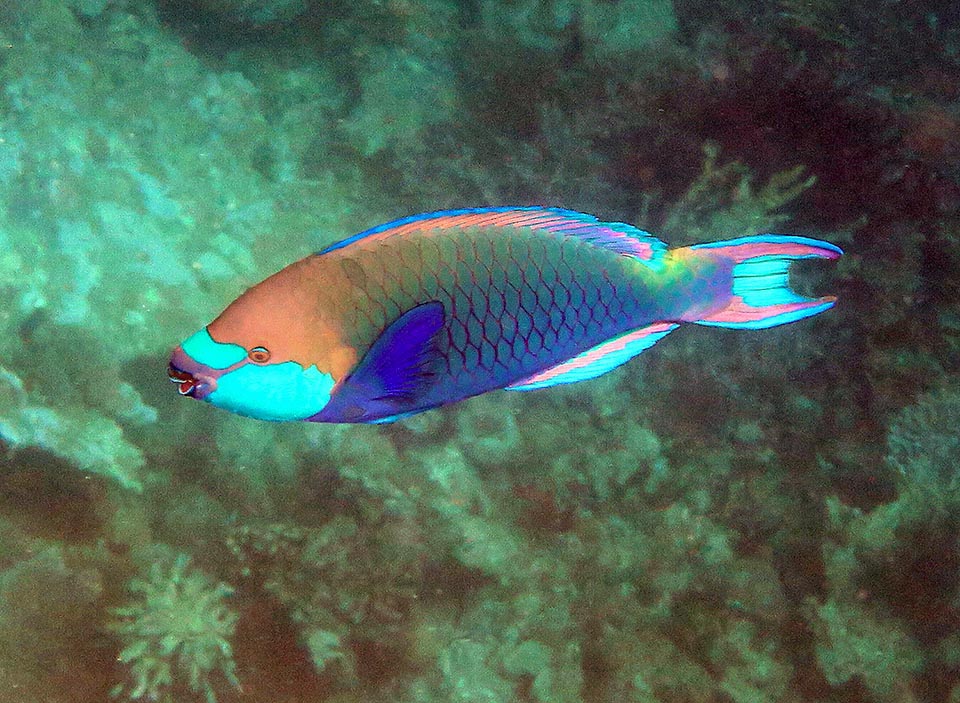 Scarus prasiognathos is vegetarian. It eats zooxanthellae, microscopic symbiont algae of the madreporic polyps, but also the encrusting algae growing on rocks and various benthic species, including the phanerogams, with the small molluscs and passing-by crustaceans that had the bad luck of being among the foliage © Gianemilio Rusconi

The males in terminal phase can reach 70 cm and show, in the corner of the mouth, on both sides, 2 canines in the bottom of the upper dental plate.

The pelvic fins are normal and the caudal, rounded then truncated in the young, is slightly elongated on the margins in the females and deeply concave in the terminal males. 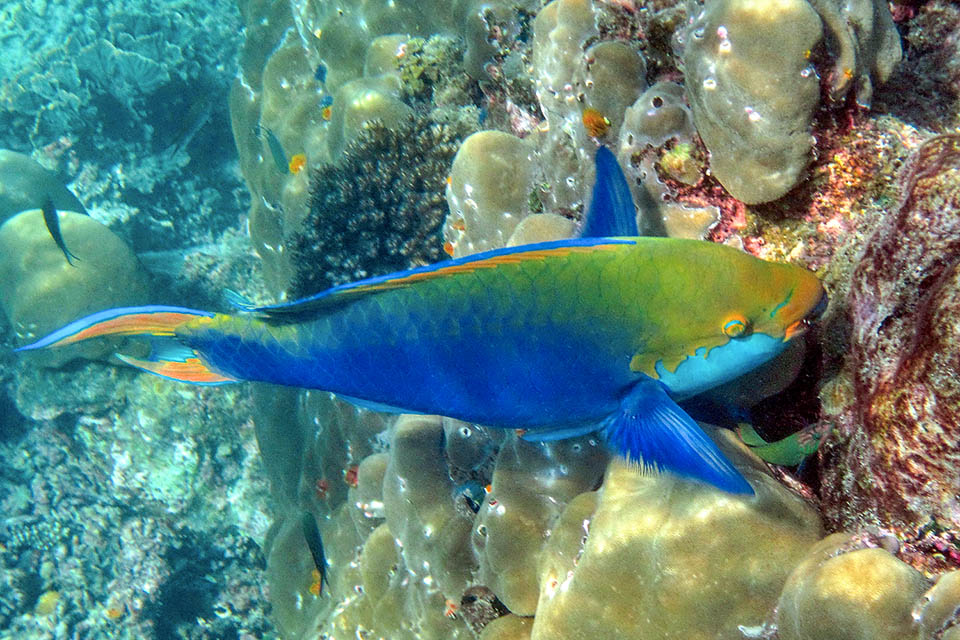 This male is gnawing the algae encrusting on the dead part of a madreporic formation. To note the two characteristic canine teeth, at the bottom of the big upper dental plate, and the showy outstretched pectoral fins that are the motor organ of the parrotfishes, as occurs in the analogous wrasses’ family © Oleg Nabrovenkov

These ones are always larger than the females because they are in their next phase. Scarus prasiognathos is in fact a protogynous hermaphrodite species with females that, once exceeding a certain size, transform themselves into males.

The juvenile stage, extremely mimetic and variable, is characterized by white and black hatchings that leave the place, while growing, to a more uniform livery tending to the female one.

The females are reddish brown, especially on the head, dotted with white spots and flecks that can, depending on the mood, disappear in a moment, to which add clear hatchings, like wrinkles, on the chin with light bluish shades. The longest one stands at the height of the eye. 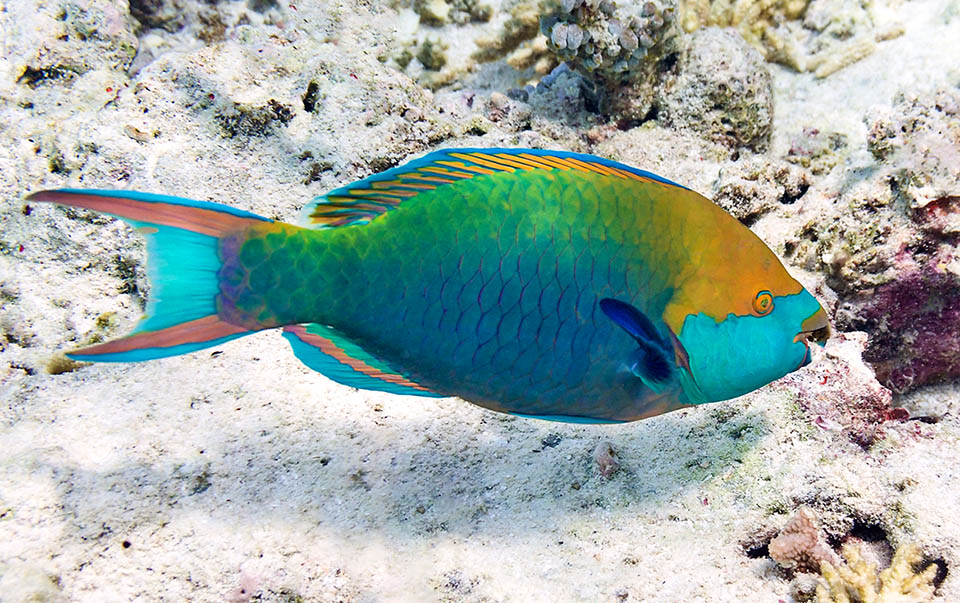 Females’ caudal fin is slightly elongated in the margins but deeply concave in the terminal males, emphasized on the sides by the showy contrast of colours © Nikolai Vladimirov

In the male livery this species displays the maximum of its splendour with a green or green blue colouring that stands out with the reddish or yellowish clear brown head whilst the snout and the chin are emerald, separated by an orange red band that colours the lips and is found again with an oblique hatching on the dorsal fin, the band at the centre of the ventral and two showy stripes before the light emerald blue edge of the caudal elongated on the sides.

Even if it lives in school, the reproduction occurs per couple on the surface and after the fecundation the eggs are entrusted to the waves. Also the larvae are pelagic, and the new generations, transported by the currents, in this way often colonize other reefs. 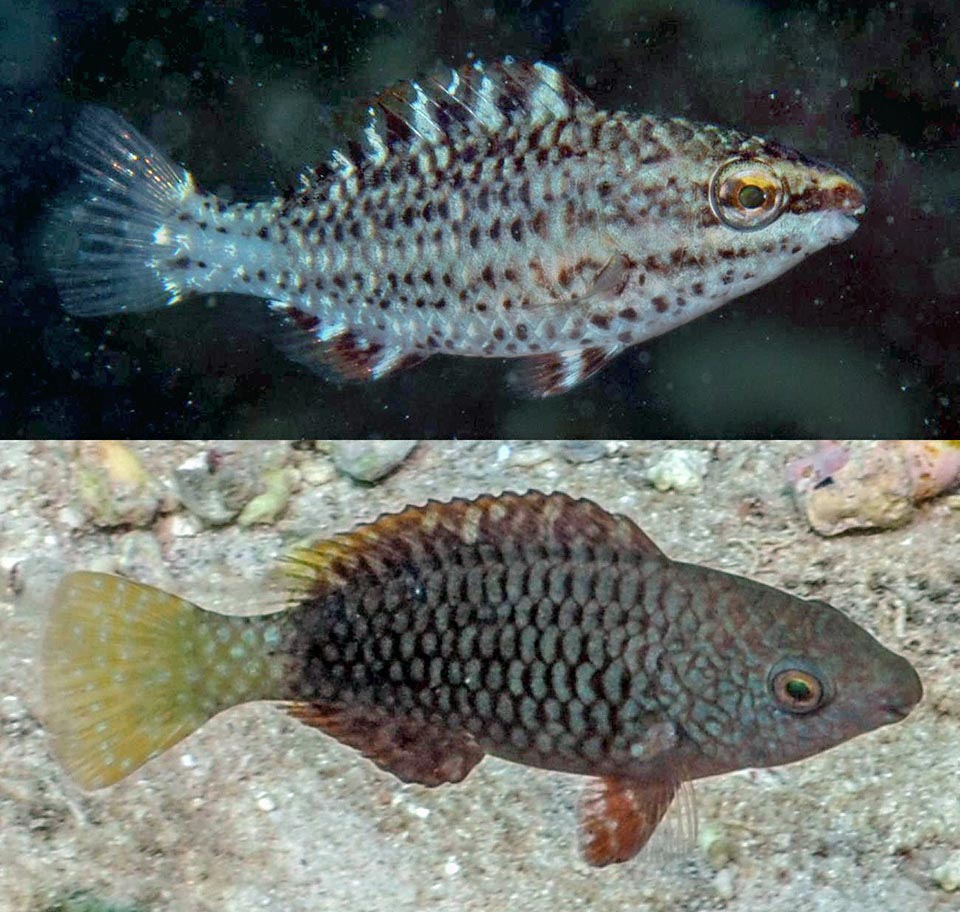 Immature young with its first mimetic livery and another one, bigger, where can be glimpsed the future female livery © Rick Stuart-Smith, Reef Life Survey

The Greencheek parrotfish il locally fished with fish traps and nets for the local consumption.

The resilience of this species is discreet, with a possible doubling of the populations in less than 15 months and now, in 2021, the vulnerability index is relatively low, marking 37 on a scale of 100.