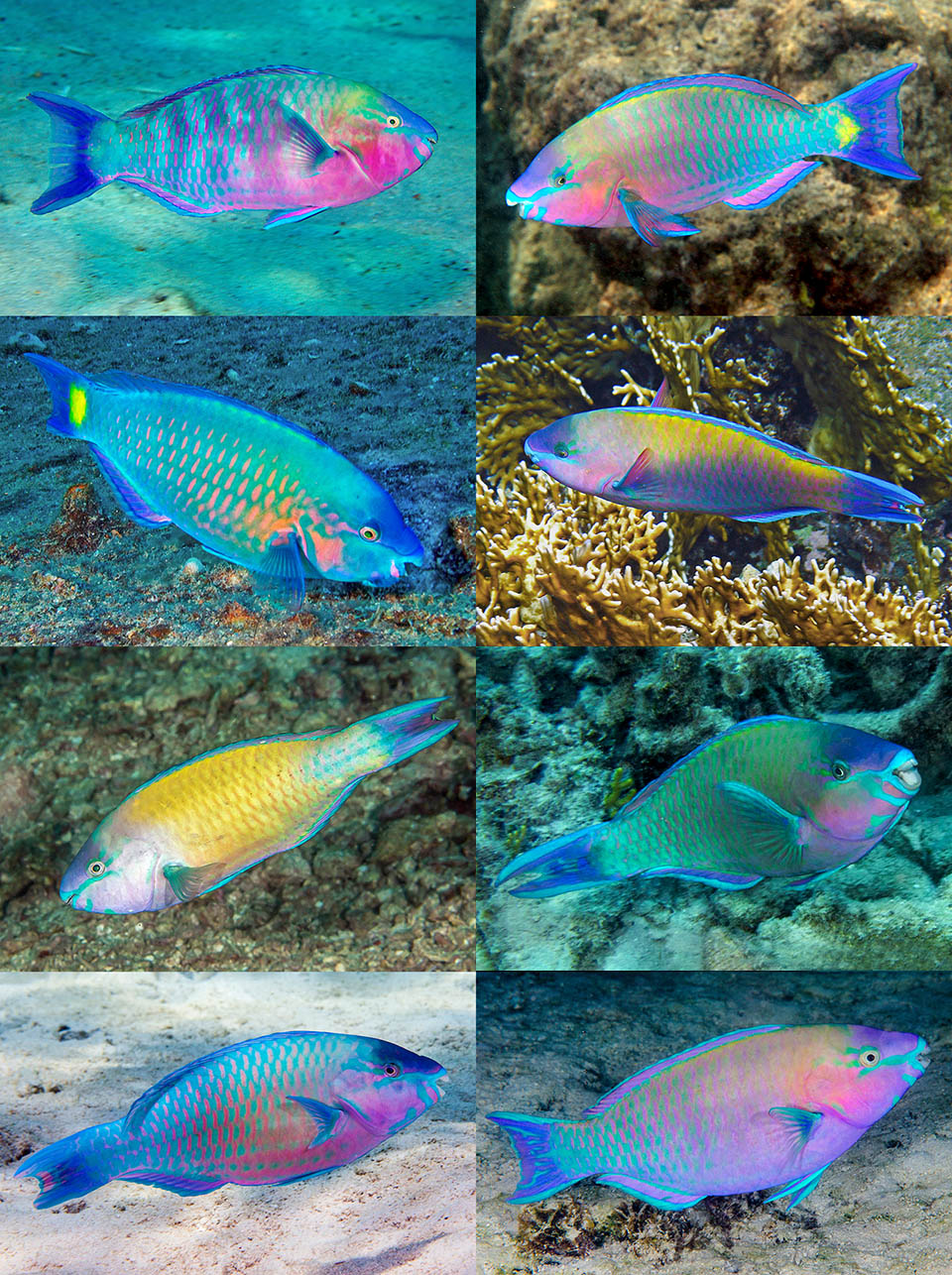 Scarus psittacus has a very vast distribution in the Indo-Pacific tropical waters. There is a strong sexual dimorphism. The males’ livery changes depending on the zone, age and mood of the fish and are reported 5 populations with different liveries that have mainly in common the typical streaks of the facial drawing associated with the head colour. Here those of the first three images (© Keoki Stender) have been photographed in the Hawaii, the fourth (© Gianemilio Rusconi) in the Red Sea, the fifth (© Rickard Zerpe) in the Moluccas, the sixth (© Rick Stuart-Smith, Reef Life Survey) along the Australian Great Barrier reef and the last two (© François Libert) in French Polynesia

Scarus psittacus Forsskål, 1775 belongs to the class of the Actinopterygii, the ray-finned fishes, to the order of the Perciformes and to the family of the Scaridae, the so-called parrotfishes. Animals that, as Capt. Jacques-Yves Cousteau said, are the “wizards of the reef”, due to their capacity of changing look during the various phases of their life, with females wearing the males’ colours, intermediate liveries, and local liveries changing dependending on the emotions. 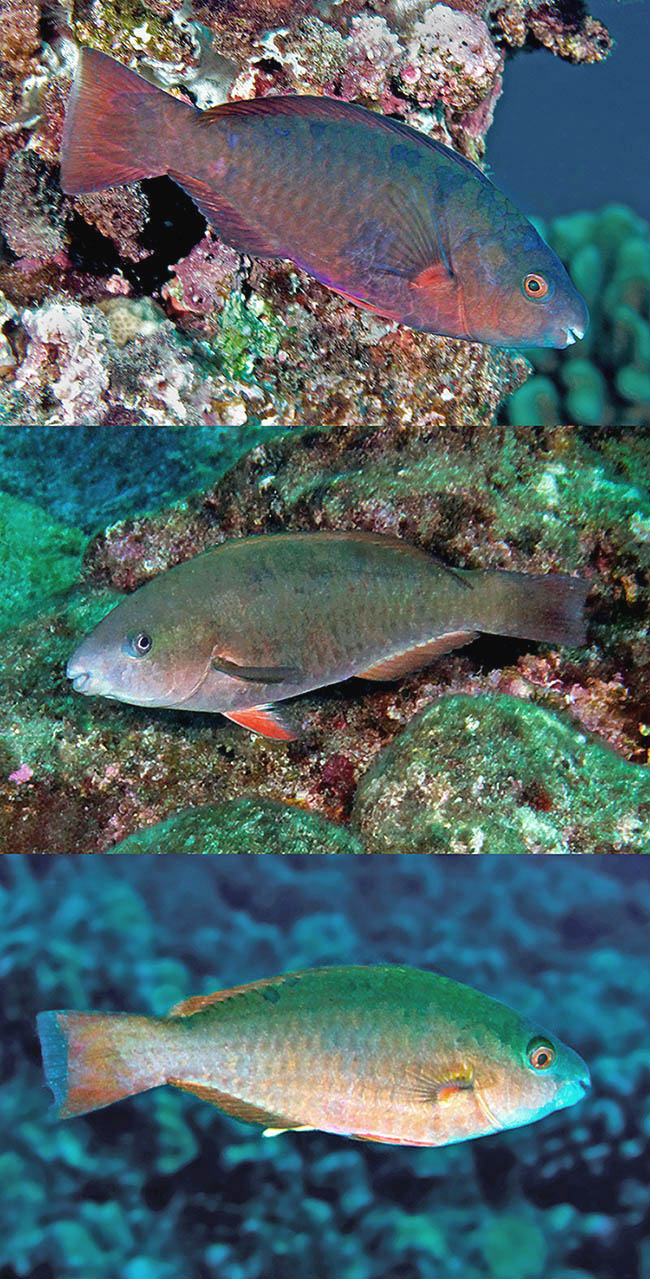 The reddish or greyish females are less variable, with the pelvic as red as in the initial livery of the two sexes © Keoki Stender

Nothing surprising if once they talked of 300 species, now reduced to about one hundred, with a dozen of genera. Scarus psittacus commonly known in many languages as Common parrotfish, counting today more than 20 synonyms, two of which, Scarus forsteri and Scarus taeniurus, were considered good species until a few years ago.

The scientific binomen of this species comes from two old vulgar names: Scarus is the name Greeks and Romans gave to the Mediterranean parrotfish, presently known as Sparisoma cretense, and psittacus meaning, not by chance, parrot in Latin.

The Common parrotfish has a quite vast distribution in the Indo-Pacific tropical waters.

Then, going down along the African coast, it is present in Somalia, Kenya, Tanzania and Mozambique up to South Africa.

It is frequent in the Réunion,Mauritius, Seychelles, Chagos and Maldive islands.

Present in India, we find it in the Andaman Islands, Cocos and in Christmas Island. Then in the Indonesian waters, Timor-Leste, Papua New Guinea, Australia, New Caledonia and Lord Howe that marks the southern limit of the species.

Northwards, it has colonized the coasts of Palau, Philippines, Vietnam, Taiwan and southern Japan.

Eastwards, after Micronesia, it is finally found in Guam, in the Micronesian islands and the Marshall ones, Samoa, Tonga, Cook, Tahiti, French Polynesia, Tuamotu, Marquises Islands and, further north, Hawaii.

Scarus psittacus is a diurnal species living in shallow waters between 2 and 25 m of depth.

It is mainly frequent in the tidal zones where the rocks abound of algae and the coral formations, exposed to the sun, are often infested by the filamentous algae that stand at base of their diet.

Less invasive than other parrotfishes such as Bolbometopon muricatum that devours tons of madrepores, it just scrapes them at the base, with its typical rostrum, taking away only a thin surface layer of them.

The whole is then ground for a long time by the pharyngeal teeth, like molars, and then proceeds directly to the intestine, as the Scaridae do not have a stomach, to be given back to the sea transformed in the white fine sand that all admire on the splendid tropical beaches.

It is therefore a species useful for the survival of the reefs, a sort of a small madreporic brush that favours its growth. 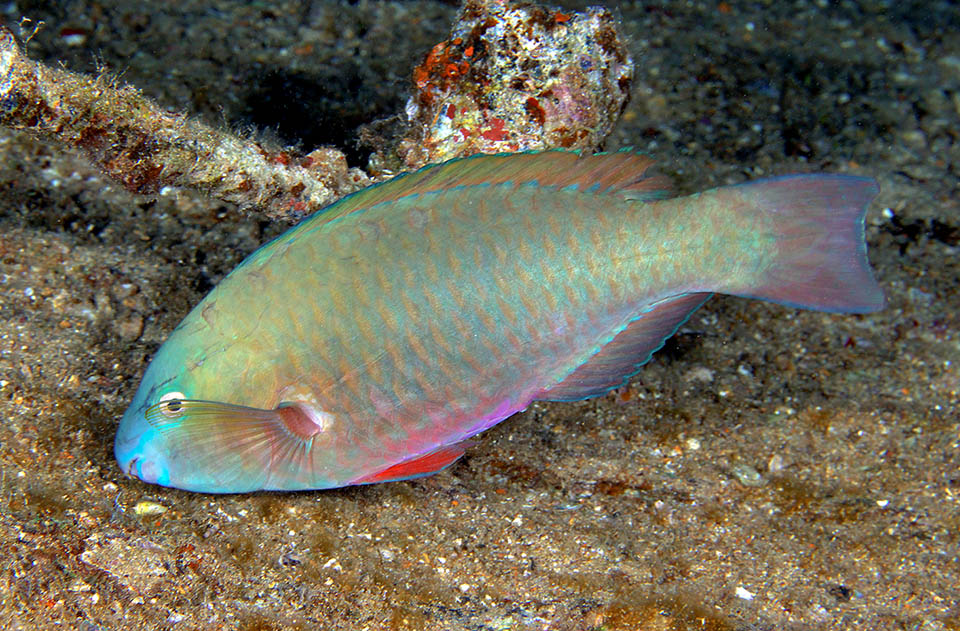 From 15 cm some females may transform into males assuming their livery. This is the intermediate phase at the Hawaii © Keoki Stender

The Common parrotfishes males can reach the length of 34 cm and 900 g of weight, but their medium size is 20 cm.

The body is relatively flat and high. The head is big with a roundish long snout at the apex. The eyes, yellow, can move independently like those of the chameleons and the maxillary teeth form, fused like in all Scaridae, two big plates: the beak, that, however, in this species is partially covered by the lips. 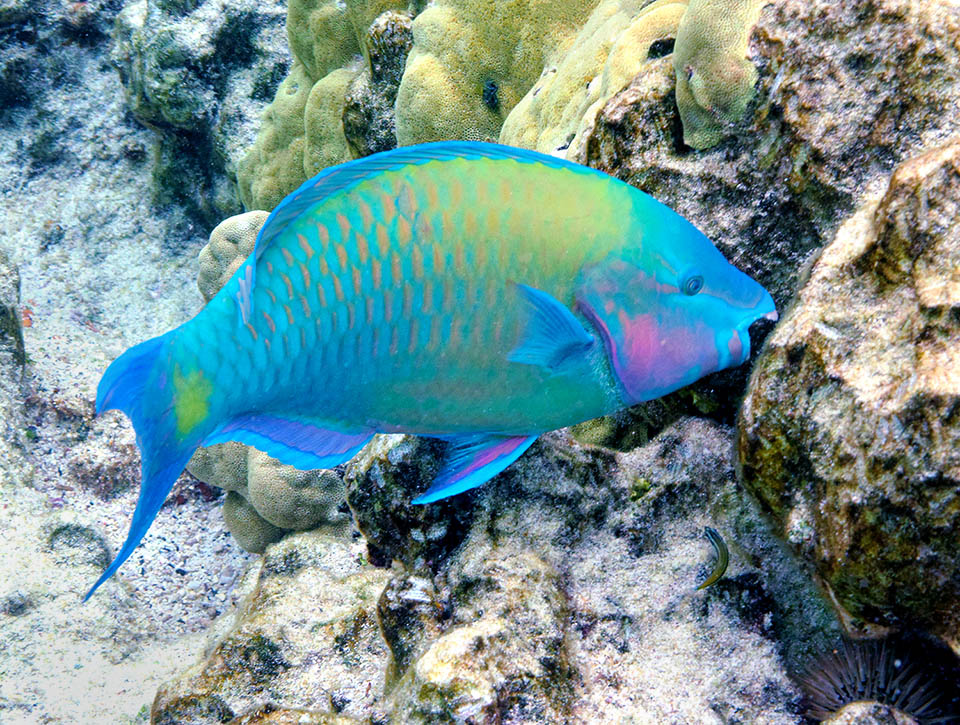 Scarus psittacus is active the day. With its beak typical to parrotfishes it gently scrapes, at the base, the algae infesting the madrepores © Kris Bruland

At their base we note, depending on the sex, one or two tiny canine teeth. Then follow, inside the mouth, the usual rows of pharyngeal teeth.

The caudal fin is slightly long at the margins in the females and more emarginate in the males. 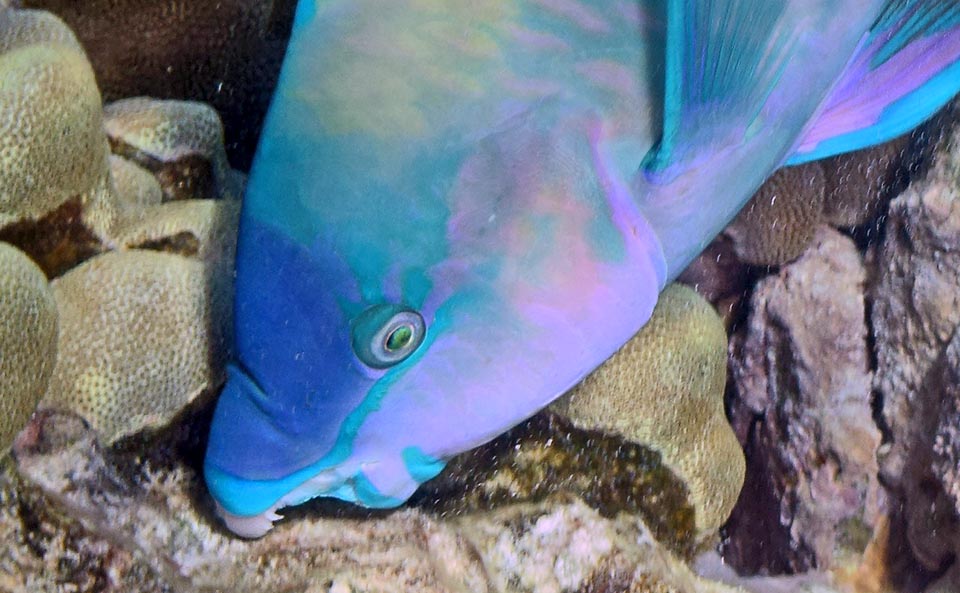 The rostrum is partly covered by the lips and at the base we note, depending on the sex, one or two couples of tiny canine teeth per jaw © Kris Bruland

There is a strong sexual dimorphism. The livery changes depending on the zone, the age and the mood of the fish. Going from the Red Sea eastward, up to Hawaii, are reported more than 5 populations with different liveries, more evident in the males. They have mainly in common the streaks of the facial drawing associated with the colours of the head.

Scarus psittacus is a protogynous hermaphrodite species, that is with the development of the female organs before the male ones to avoid the self-fecundation, and diandric, that is with two categories of males: the primary ones that are born as such and maintain the initial livery like the females’ one, and the secondary that are born from the transformation of a female in male with relevant livery. 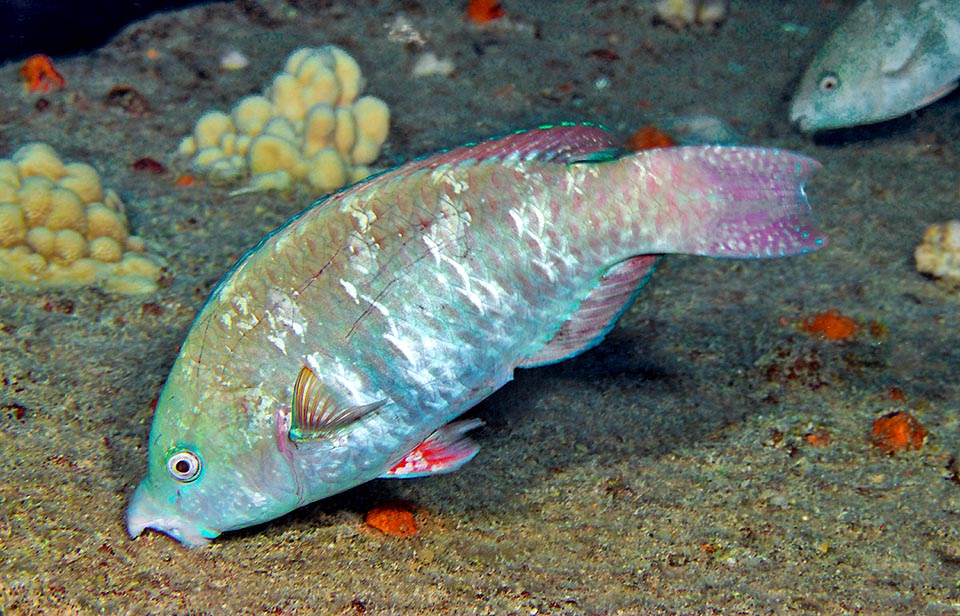 In cleaning the reef, Scarys psittacus does not ignore the rocks and diatoms and microscopic algae veil forming on the detrital bottoms © Keoki Stender

From research done in Hawaii it turns out that the primary males are only 28% and only rarely, while growing, turn in secondary males.

At the beginning, under 2 cm, the small fishes are all alike, greyish or greenish with the possibility of adapting these colours to the environment. Then, when about 4 cm, some red shades appear, starting from the pelvic fins, and when about 6 cm, they get closer to the livery called initial, pale grey, greenish grey or brown with more or less clear scales. That is that of the primary males and of the young females, characterized at times bright by red pelvic fins. 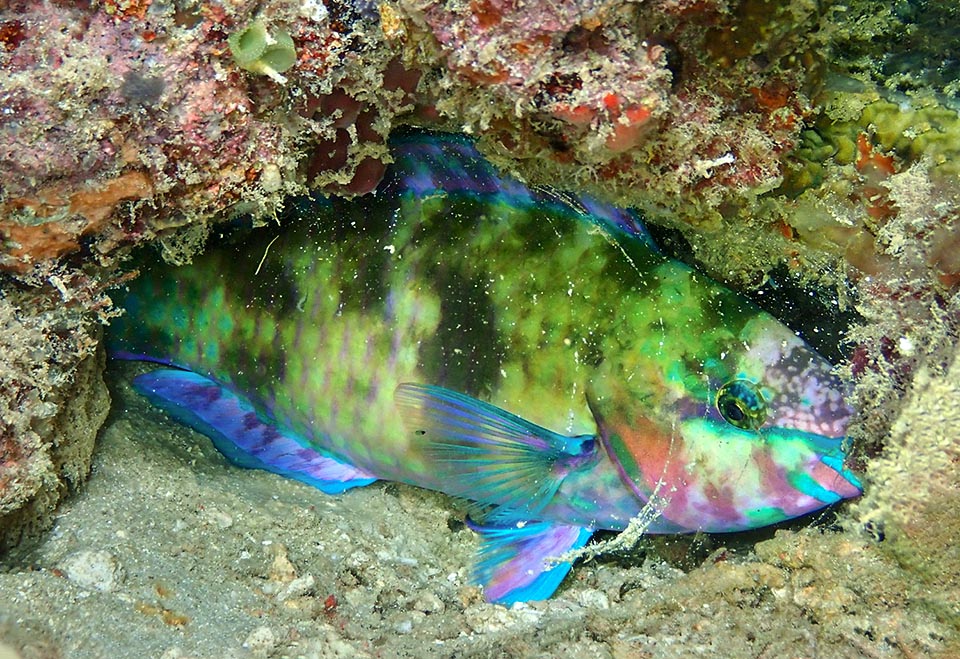 It wears a mimetic pajamas to sleep peacefully, looks for a ravine where to stand vertically and creates a great protective bubble, similar to a veil of transparent plastic © Marta Rubio-Texeira

The females can reproduce starting from the length of 10 cm and the change of sex begins when they reach 15 cm. The bigger secondary males, when the terminal phase is achieved, have brighter colours and during the reproductive period can afford a territory with a small harem where however, often enter furtively the “sneakers”, the primary males like the females, ready to emit, inconspicuously, their gametes at the moment of the fecundation.

In the livery of the terminal males are often dominant the green or the turquoise colours, with the characteristic bright blue or turquoise green pattern of the head. The big scales typical of the parrotfishes have the margin pink, salmon or dark blue. The snout is lavender grey. 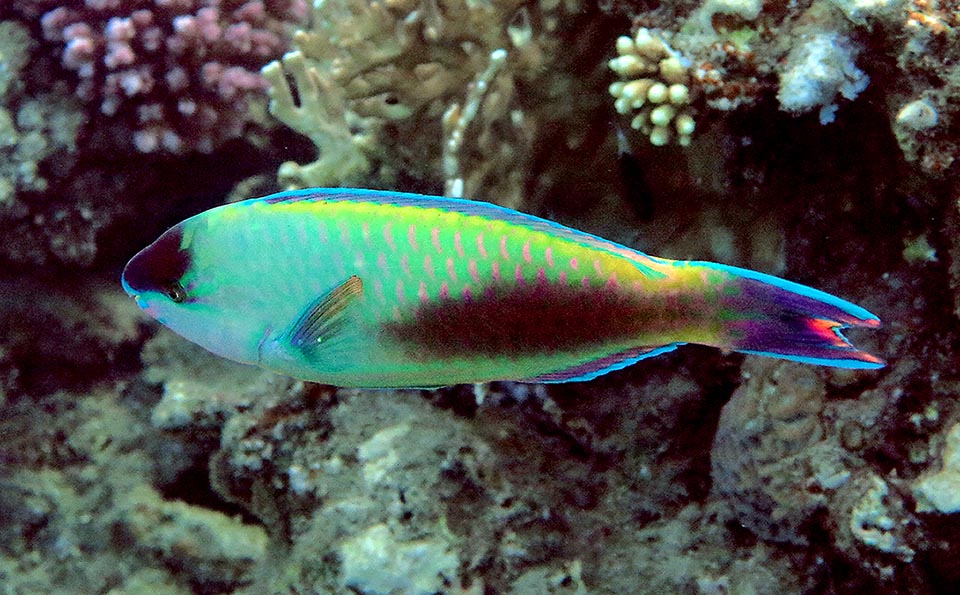 In the reproductive time terminal males have a small harem and a territory. If a rival crosses the border they threaten it, instantly clearing the back in neat contrast with the dark front and the blackish band appearing on sides. If not enough they grab each other with mouth and swim tucking on it, like a pin, until when the weakest goes away © Gianemilio Rusconi

The back often ends with a pale green or yellow stripe and in the caudal the blue colour dominates at times with a yellow spot at the end of the peduncle. The cheeks and the throat are often pink. The males in nuptial livery may have the body bright yellow. Then there is a threatening colouring, to be used, for instance, when a competitor male crosses the frontier, characterized by the very clear back in stark contrast with the dark front and the blackish band appearing on the sides.

The females, reddish or grey, show less variability with their red pelvic fins and the often dark body. 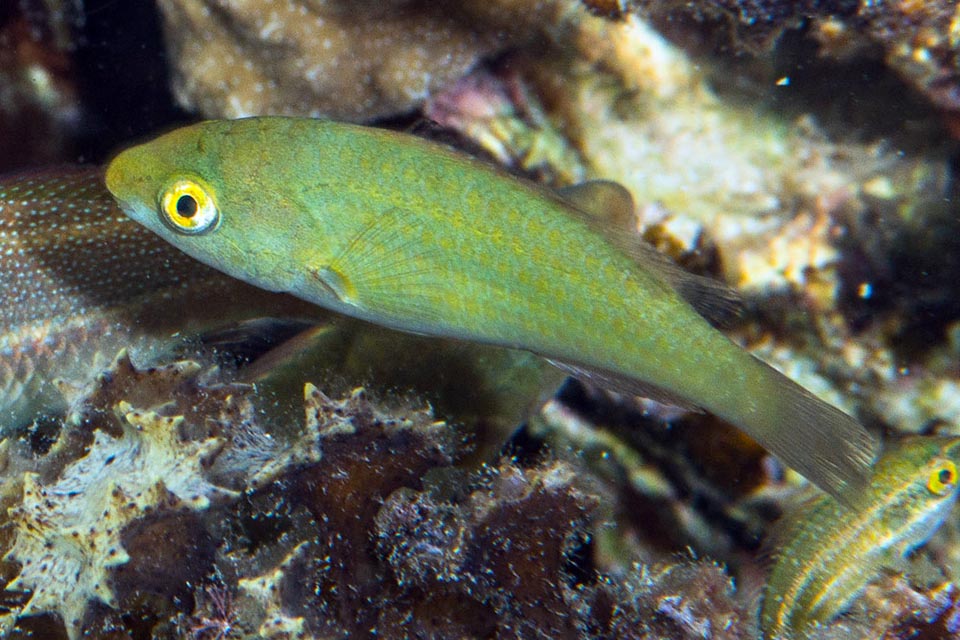 Eggs are fecundated swimming by the terminal males and the primary ones, with livery very similar to the females, when they get close carried by the current. Under 2 cm, the small fishes are alike, with a livery that can quickly turn from green to grey and longitudinal yellowish bands that are not always evident © Francois Libert

Finally, there is the night livery, with clear and dark camouflaging spots. Moreover, like several parrotfishes, Scarus psittacus wraps in a transparent protective bubble. When it has found on the bottom the right cleft, where it is stuck for sleeping in a vertical position, it produces a mucus, with glands under the operculum, that concentrates in the mouth forming a sort of ball. It is the raw material to spread with the pectoral fins, before it hardens, on the body, to form a transparent bubble relatively solid, something like the plastic film for wrapping the food.

It completes the protective bubble in about half an hour and then falls into a deep sleep, sure not to be disturbed. The mucus, with which it is fabricated, contains in fact an antioxidant unwelcomes to parasites and it seems that it prevents the predators from detecting the fish by the smell. 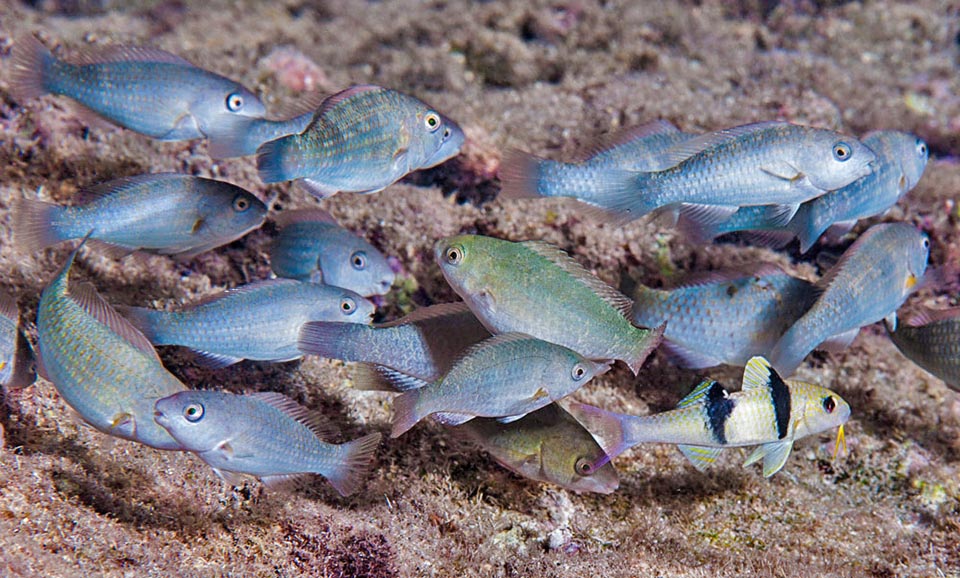 They grow grazing in group, often mixed with other species, like here with the young of another parrotfish, the Chlorurus enneacanthus, and a small exotic mullet © Francois Libert

Besides cleaning the corals from the filamentous algae, the Common parrotfish nourishes also of those growing on the rocks and of the veil of diatoms and microscopic algae that forms on the detrital bottoms.

During the warm season we often note aggregations forming where the currents disperse the eggs. The dominant males become territorial and face the rivals on the borders with ritualized duels. They grab each other with the mouth and swim tucking on it, like a pin. At the end, the weakest gives up effort and withdraws, perhaps with a headache. The coupling is not by group but takes place by couples, with the “sneakers” that fecundate, they too, not far away, the eggs carried by the currents. 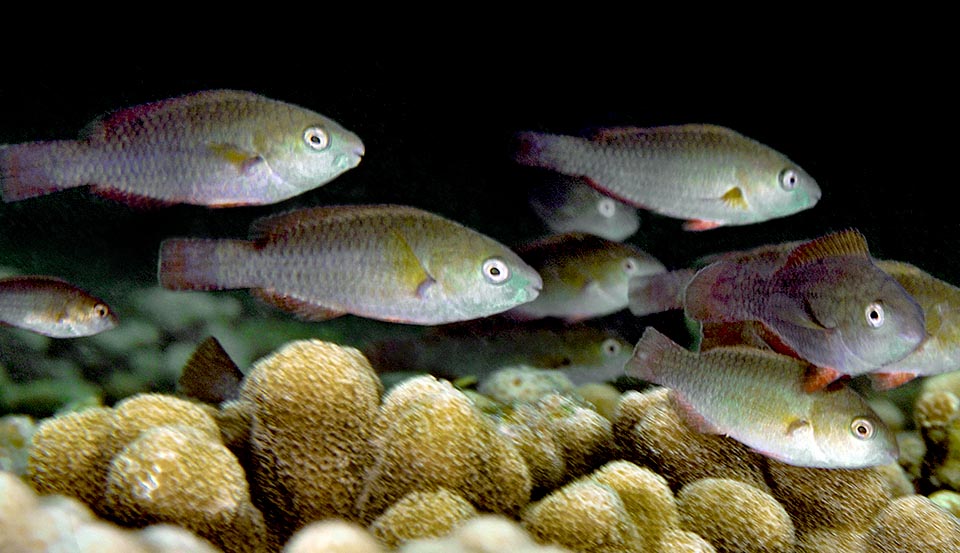 When 4 cm, red streaks appear, starting from the pelvic find, and when 6 cm it approaches the so-called nuptial livery © Keoki Stender

Unlike many species of sparids, these are not round but conical, 3 mm long and wide at most 1 mm. The larvae are pelagic, and the lifespan of this species is 5 years.

Not suitable, despite the nice livery, to the aquaria for its way of feeding, Scarus psittacus is sometimes fished for local consumption, even if the meat, flabby, is not prized.

The resilience is excellent, with a possible doubling of the populations in less than 15 months, and consequently nowadays, in 2021, the vulnerability index stands among the lowest in the world, marking only 16 on a scale of 100. 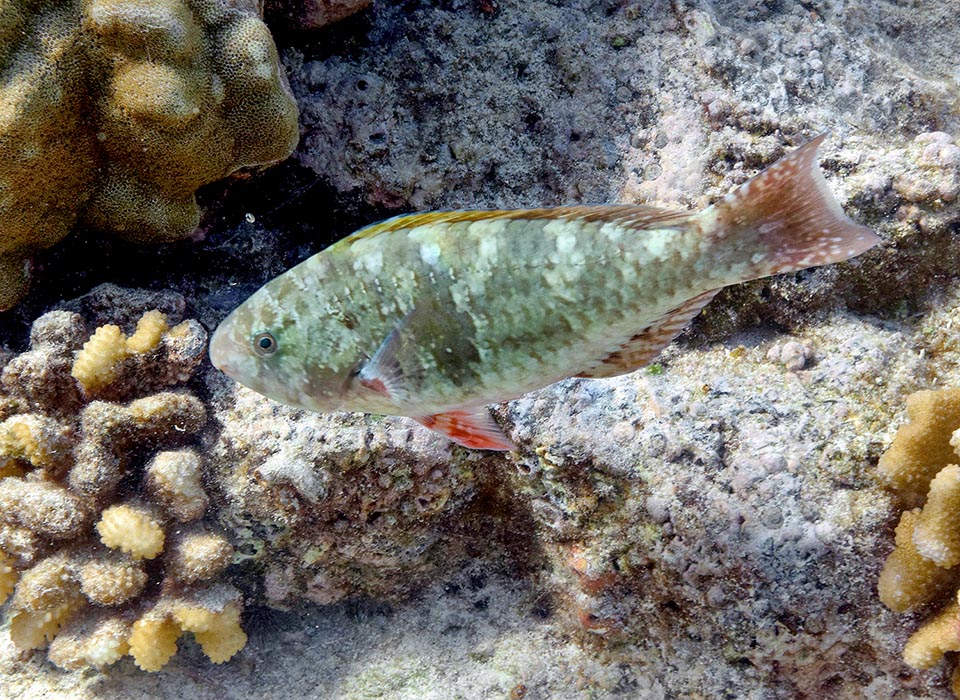 This, greenish grey or brown with a marbled chiaroscuro and red pelvic, is the classic initial livery where the primary males and the young females are equal © Kris Bruland