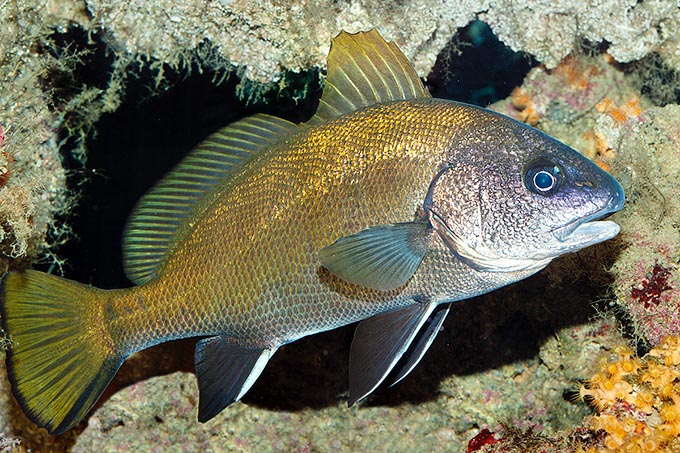 The Brown meagre (Sciaena umbra Linnaeus, 1758) belongs to the class of Actinopterygii, the ray-finned fishes, to the order of Perciformes and to the tropical family of the Sciaenidae which counts only 5 species in the Italian seas.

The genus comes from the Greek “skiaina, skion”, the name they were giving to the fish; the species from the Latin “umbra” = shade, due to the colour similar to a shade.

The brown meagre is present all over the Mediterranean, Black Sea included, where however the specimens are scarce, as well as on the eastern coasts from Libya to Turkey.
After Gibraltar Strait, we find it, northwards, up to England and, southwards, up to Senegal, including the islands of Madeira, Canaries and Cape Verde.

It lives in shallow waters, usually between the 8 and the 20 m in summer, going down, at most, up to 200 m during the winter. It is found on the sandy bottoms, especially in the grasslands of Posidonias (Posidonia oceanica), and on the rocky ones. 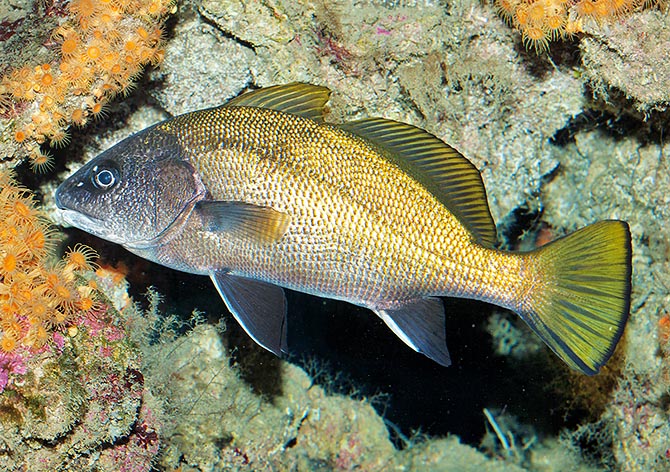 It enters, at times, also the estuaries, but the choice habitat, where it gathers in even numerous schools, is done by the dark grottoes, where it rests, motionless, in midwater.

Its profile is typical, with the back very curved in comparison to the belly. The mouth, almost horizontal under the roundish snout, has on both jaws 3-4 rows of teeth, to which add, towards the outside, some smaller teeth.

The eye is relatively big and there are two spines, hidden, under the skin of the operculum.

On the contrary, under the chin, the barbel of the Shi drum (Umbrina cirrosa ) its close relative, is absent.

The scales are relatively big and extend also to the pre-operculum and to the operculum. The lateral line follows the gibbosity of the back. 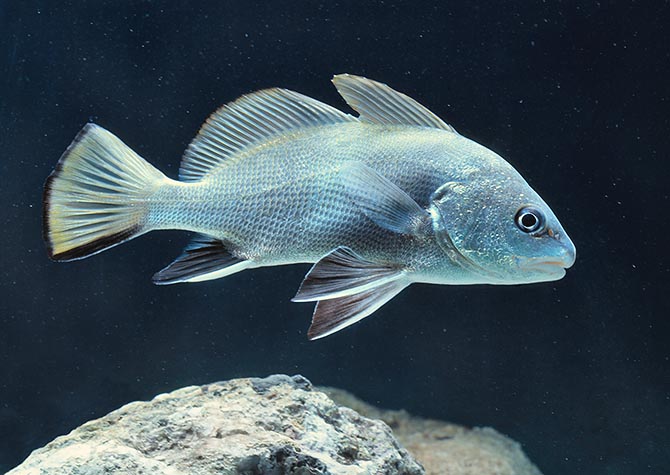 The brown meagre is active mainly during the night, when it goes hunting small fishes and crustaceans, but it seems that, now and then, it integrates its carnivorous diet with some seaweed.

It reaches the sexual maturity when about 25 cm long and reproduces once a year, in summer, with external fecundation.

The lifespan for the juveniles is of 21 years.

The flesh is excellent, but even if this species is endangered by the fishing and that at the Canaries, just to give an example, it nourishes million of tourists per year, we cannot yet say that it is in great danger. In the most favourable conditions, in fact, the populations may double in 1,4-4,4 years. The vulnerability index of this species is of 64 over 100.