The Shi drum (Umbrina cirrosa Linnaeus, 1758) belongs to the class of Actinopterygii, the ray-finned fishes, to the order of the Perciformes and to Sciaenidae family.

It is present in the Mediterranean, Black Sea included, and, past Gibraltar Strait, along the European and African Atlantic coasts, up to Brittany and Morocco. In Italy, it has become rare in the Ligurian and northern Tyrrhenian Seas.

It lives solitary or in small sedentary schools along the coasts, on the sandy shallows, but often also on gravelly structures among the rocks. It is not affected by brackish water and, therefore, it is found also in the lagoons and the estuaries. It may go down up to 100 m of depth. 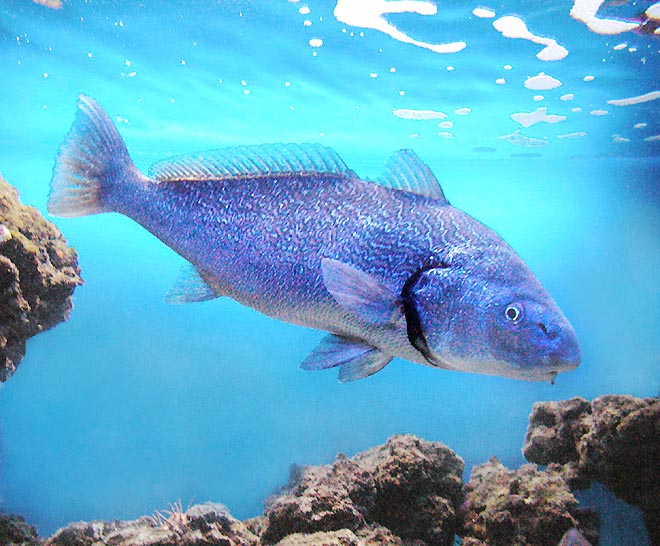 It can reach, exceptionally, 1 m of length and 12 kg of weight, but, usually, it does not exceed the 70 cm.

The body, compressed on the sides, is elongated with a much arcuate profile towards the head, whilst the belly is straight. The mouth is placed at the bottom, with a short barbel under the chin.

The teeth are tiny, placed in bands on the jaws and on the pharyngeal bones. The opercula show modest flat spines. The dorsal fns are two. The first, high and triangular with spiny rays, and the second, lower, and elongated to almost reach the tail, which has an unusual profile, slightly concave only in the upper part, more evident in the adults.

It nourishes of molluscs, worms, crustaceans and echnidoerms, rooting in small schools the seabed. The shi drums are able to reproduce once reached the 37-40 cm.

The females, synchronized, lay in group between May and July, and the only 0,8 mm pelagic eggs are at once fecundate by the males. The young, up to 3 cm, are blackish with white fins.

Attempts of breeding are underway, as its flesh is very valuable and demanded.