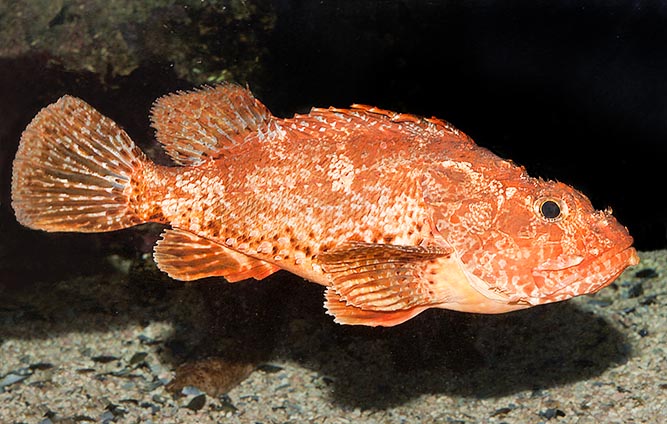 The Slender rockfish (Scorpaena elongata Cadenat, 1943) belongs to the class of Actinopterygii, the ray-finned fishes, to the order of Scorpaeniformes and to the family of Scorpaenidae.

The name of the genus is that the old Romans were giving to these fishes, with reference to the spines, which evoke the stings of the scorpions.

The name of the species comes from the Latin verb “elongo” = to elongate, because, if compared to the others, the slender rockfish has a relatively longer body.

This is an animal we had under our noses, but which was discovered only in 1943. It was, in fact, mistaken with the Red scorponfish (Scorpaena scrofa) till when the French ichthyologist Jean Cadenat seized 5 specimens, which he described, at Ras Nouadhibou, in Mauritania. At that time it was considered as very rare, but nowadays it has been ascertained that, on the contrary, it is a relatively common fish, if sought after in the right spot.

The slender rockfish is present all over the Mediterranean, but the Black Sea. After Gibraltar Strait, we find it, northwards, up to the Biscay Gulf and, southwards, up to Namibia, Canary Islands included.

It wanders between the 75 m and the 800 m of depth. In the Mediterranean and in the northern Atlantic, almost always under the 200 m, whilst along the warm African coasts it often comes up around the 100 m. 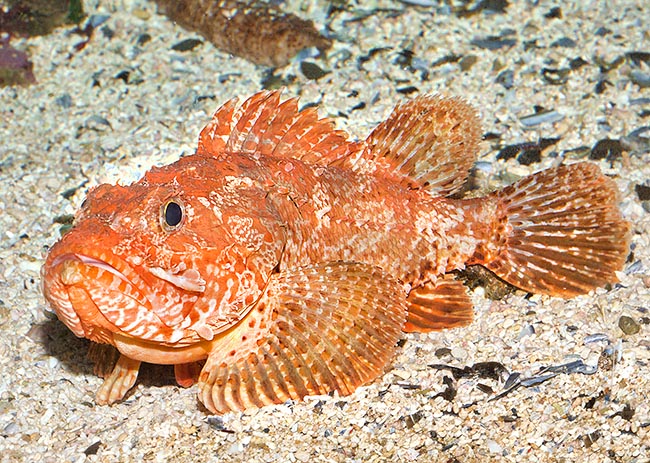 It lives at 75-800 m of depth and was described only in 1943 by the French ichthyologist Jean Cadenat © G. Mazza

It loves the vast muddy zones, populated by the fanciful anthozoans of the deep waters, where it can easily sight the preys, and then can hide close some rocky formation and lazily digest, safely, the lavish meals.

Even if it may reach the 50 cm, the seized specimens usually measure 30-35 cm.

It differs from the Scorpaena scrofa, to which it resembles, due to the pink hue, the bigger eyen and the absence of laciniae under the jaw. However, those of the cheeks are very showy, which, starting from the lower part of the pre-operculum at times exceed the maxilla.

Also in this species, the head is rich in spines, but surely more elongated than that of the red scorpionfish and with a more straight profile. Pre-operculum and operculum are long and armed.

The slender rockfish nourishes of fishes, especially young cods, molluscs and crustaceans, with huge carnages between the schools of swimming shrimps. It reproduces between late summer and early autumn. The larval forms are pelagic.

Even is few data are available, it is and endangered species due to its low reproductive rate. In the best conditions, in fact, even 14 years are needed for doubling the population. The vulnerability index of this species is of 63 over 100.