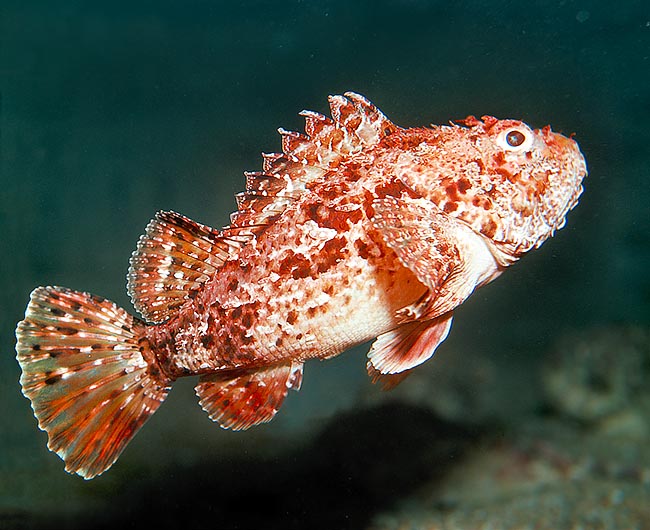 Red scorpionfish (Scorpaena scrofa) is the biggest in Mediterranean, with 50 cm and 3 kg © Giuseppe Mazza

The Red scorpionfish (Scorpaena scrofa Linnaeus, 1758) belongs to the class of the Actinopterygii, the ray-finned fishes, to the order of the Scorpaeniformes and to the family of Scorpaenidae.

The name of the genus is that the old Romans were giving to this fish, with reference to the poisonous spines, which reminded the bites of the scorpions.

The name of the species refers to the sow, the female pig, to which it resembles, in the world of fish, due to its protruding shape.

The red scorpionfish is present in all the Mediterranean, but the Black Sea. The, passed Gibraltar Strait, it has colonized all the Atlantic coast of the Old World, from Scandinavia to South Africa, including the Azores, the Canaries, Madeira and Cape Verde Islands. Finally, like many species, it has gone northwards along Africa in the Indian Ocean up to Mozambique.

It can be found at 20-500 m of depth, but rarely exceeds the 150 m. Its choice location is where the rocks mix with the sandy or muddy bottoms, but we find it also in the brackish waters. The juveniles often camouflage between the rocks of the backwash, and once more than 20 cm, the progressively go down, looking for a calm place for their sedentary life. 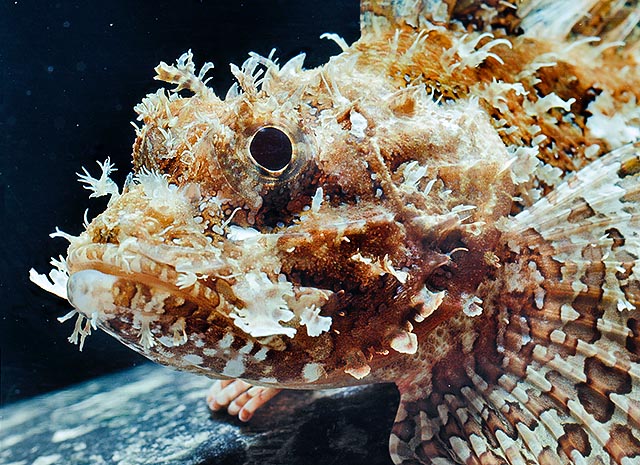 It can be also brown, but has always dermic appendices under the mandible © Giuseppe Mazza

Scorpaena scrofa is the biggest Mediterranean scorpionfish, with a record of 50 cm and almost 3 kg.

The body is oval with an impressing head, not only due to its enormous mouth, but for the spines and the dermic appendices which protrude in the most unlikely places breaking the outline with a clear mimetic effect.

Unlike other scorpionfishes, here the appendices grow up also under the mandible, slightly longer than the jaw.

Both are armed by villiform teeth, that is, much thin and close one to the other forming bands: 4-5 series over and 3-4 under, not to talk about the teeth pushing out on the vomer and on the palatines.

The dorsal fin is unique, but well evident. In the first part we see 12 poisoned spiny rays, in the second, 9-10 soft ones.

The poison glands, one per ray, are protected by a sheath which breaks at the impact, in the upper part of each spine. The quantity of poison is very small compared to analogous tropical species, but the bite is very painful.

In some cases there may be hypotension with fainting or dizziness. The poison is thermolabile and therefore a first remedy may consist in soaking the affected part into the warm water. 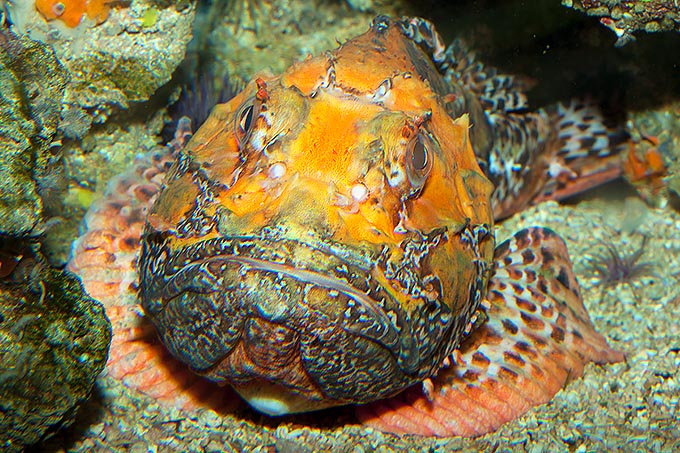 As the name suggests, the whole colour is the red, with irregular and differing spots from individual to individual, which may be also brown and change hues depending on the environment.

All is in function of camouflaging, with the chromatophores playing an important role, and are not rare, especially in the corraligenous places, the individuals with big pale spots: pink, orange and even yellow. Often, but this is not a rule, we can see a dark spot in the upper part, at the centre, of the dorsal fin.

The red scorpionfish, as it can be easily guessed from its obese shape, is an insatiable predator. It manly eats fishes, crustaceans and molluscs.

It reproduces with floating eggs, united in mucous small masses.  The larval forms are therefore pelagic. The vulnerability index of this species is of 68 over 100.