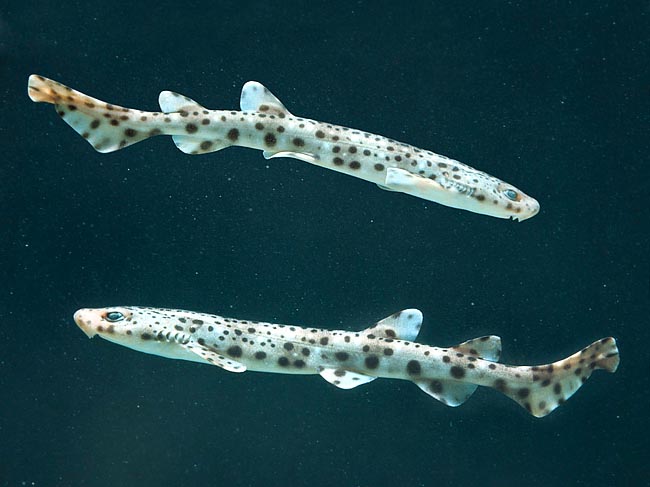 The Nursehound (Scyliorhinus stellaris Linnaeus, 1758), belongs to the Class of the Chondroichthyes (Chondrichthyes), the well known cartilaginous fishes, to the Order of the Carcharhiniformes that has more than 270 species of sharks, and to the family of the Scyliorhinidae.

The name of the genus comes from the Greek “Skylla”, Scilla in Italian, a nymph of the sea, transformed by Circe for jealousy into a marine monster, with 6 dog-heads, which devoured the seamen in the Strait of Messina, given to a rough-skinned shark, and from the Greek “rhinos” = nose, with reference to the long and flat nose, with two nasal openings, well parted, which do not reach the mouth.

The name of the species “stellaris” comes from the Latin “stella” , and therefore, stellar, with a clear reference to the spots, placed like stars along the body.

The Italian name of gattopardo (wildcat) evokes the spots of the well known feline.

It is present in all the Mediterranean, but the Black Sea, and, after Gibraltar Strait, goes northwards along the eastern Atlantic coast up to Scandinavia and, southwards, reaches Senegal, colonizing the Azores, Canary, Madeira and Cape Verde Islands. But it is often matter of a leopard spots with isolated populations.

It lives also offshore up to 400 m of depth. But, usually, it sails between the 20 and the 60 m, in clear waters, between the corals, the rocks, the stony bottoms and the underwater grasslands. During the day, it sleeps hidden between the rocks and goes hunting during the night. 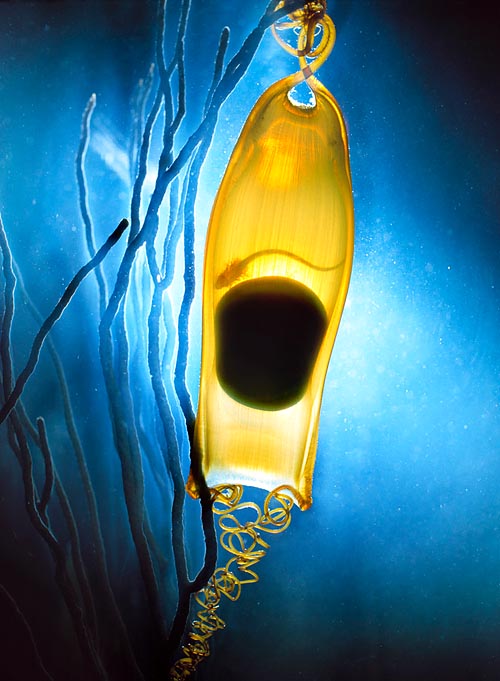 It can be 170 cm long, but in the Mediterranean it seldom exceeds the 80-100 cm, and the medium length in the Atlantic is of 125 cm. The look is that of a small shark, with many dark big spots and few white ones, smaller, on a ash brown background. The two dorsal fins are placed much back, in the second half of the body, set back even of the ventral ones. The branchial openings are five and the oval eye does not have, as in the other Chondrichthyes, the nictitating membrane.

The jaws are armed with several teeth, but its is absolutely a harmless species for the man.

It nourishes of all the fishes getting close: cods, herrings and mackerels, not to forget the bottom fishes, such as the tub gurnards, the soles or the plaices, and eats even the small sharks, such as the small-spotted catshark (Scyliorhinus canicula ) which is smaller congener.

Then do come the crustaceans and the cephalopods: cuttlefishes, squids and octopuses. And if one of these, of adequate size, tries to react to the bite with its tentacles, the nursehound folds its long body on itself and utilizes, like a file, the skin equipped with cutting scales, until when the ill-fated is obliged to abandon, bleeding, the seizure. This a technique used also for defence; this is well known by the incautious hands and arms of the fishermen who take them from the nets.

The Scyliorhinus stellaris is an oviparous species with internal fertilization which, in the Mediterranean, reproduces almost all the year. During the mating, the male embraces the female twisting into a ring, and if all goes well, this one may spawn only one egg per ovary, therefore, not more than two.

They are odd cases, 10-13 cm long and 3-4 cm broad, with the edge typically reinforced and some tendrils, over and below, for firmly anchoring to the gorgonias or to other submerged supports. The incubation lasts 9 months, and seen that the theca is fairly transparent, the growth of the embryo, attached to the yolk, can be followed. By the birth, the young measure 10-16 cm and have a lifespan of 19 years.

Even if their flesh is not much tasty, and the liver is even toxic, the nursehounds are often found on the fresh fish market stalls. They are not fished intentionally, but they fall by chance into the trawl nets with devastating effects for the species which is nowadays endangered. The lack of preys caused by the industrial fishing, the long reproductive cycle and the fragmentation of the populations are creating in fact major threats on its future. The vulnerability index of this species is of 83 over 100.