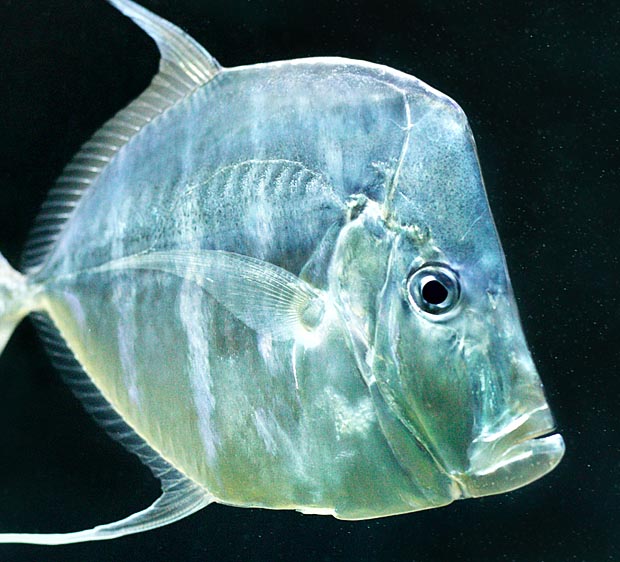 With its unique and severe profile, Selene vomer is at home in the American Atlantic © Giuseppe Mazza

The Lookdown (Selene vomer Linnaeus, 1758) belongs to the class of the Actinopterygii, the ray-finned fishes, to the order of Perciformes and to the family of Carangidae which counts 30 genera and about 150 species.

The name of the genus, “selene”, means in Greek moon, with reference to its silvery reflections.

The name of the species, “vomer”, means in Latin plow.

For once, therefore, the etymology is clear: it is a flat fish, shaped like a plow, shining like the moon.

It is at home in the Western Atlantic. Just to give an idea about its distribution, we find it from Florida and the Gulf of Mexico up to the Caribbean Sea and Brazil. It is therefore present in the southern part of the USA, in Mexico, Belize, Guatemala, Honduras, Nicaragua, Costa Rica, Panama, Colombia, Venezuela, Guyana, Surinam, French Guyana and Brazil, not to forget many islands, such as the Bahamas, Cuba, Puerto Rico, Trinidad and Tobago.

It mainly lives in little shallow coastal waters on the sandy and muddy bottoms, but also in brackish waters and, offshore, up to about 50 m of depth. The juveniles often frequent in schools the estuaries, finding shelter in the seagrass meadows and in the harbours, whilst the adults swim alone, in pairs or in small groups.

Even if it usually measures 35-40 cm, the lookdown may get closer to the 50 cm and exceed the 2 kg. The body, flat and high, has an unmistakeable profile. It goes down almost vertically along the head, the mouth below, whilst the terminal part of the fish, even if short, is more in line with the canons of the family of the carangids. The dorsal fins are two. The first counts 8 spiny rays, the second, sickle-shaped and enormously stretched in the first part, has one spiny ray and 23 soft ones; the ventral, almost specular, 3 spiny rays (2 are absorbed when the fish grows up) and 18 unarmed. The great pectoral fins are falciform, the ventral almost non-existent and the caudal is forked. 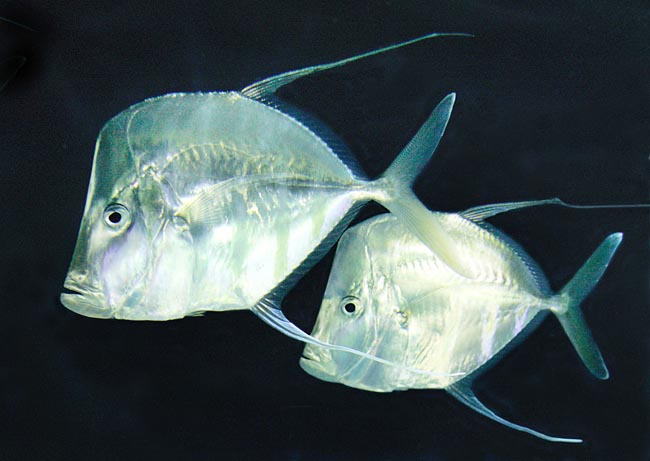 35-40 cm long, has no colours but microscopic crystals decomposing the light after the inclination © G. Mazza

The lunar colour, with iridescent metallic reflections, is produced by microscopic crystals decomposing the light depending on the inclination, with golden, green or blue shades, in order to confuse its predators and disappear from their sight, taking advantage in open seas, as happens with Selar crumenophthalmus, of the effects of the polarized light.

It mainly nourishes of benthic animals, such as crabs, shrimps and annelids, but often also of fishes.

It mainly goes hunting in the dusk hours, swimming slowly, but if it discovers a prey or is in danger, may perform spectacular sprints. The adults, when seriously menaced, can emit strong grunts by means of the swim bladder.

We know that the eggs are spawned offshore, on the bottom.

The planktonic larvae get rapidly to the surface and live for some time sheltered by objects or floating seaweeds, such as the sargassos, nourishing of plantonic crustaceans. After the metamorphosis, which takes place when about 12 mm long, the juveniles reach the size of a coin, they show wide ventral fins, much larger and different than those of the adults, and two vey long filaments carried from the second and third ray of the first dorsal fin. They will get the adult look only starting from the size of 10-12 cm.

It is a spectacular fish, without any doubt, almost always present in the public aquaria, and tendentially chic for the domestic ones, seen that recently they have succeeded in reproducing it in captivity. It is not, therefore, menaced by the aquaria market, but rather by the fishing. Its flesh, as a matter of fact, is excellent and sought, despite the risk of contracting a serious alimentary intoxication, called ciguatera, when predates herbivorous fishes nourishing of poisonous seaweeds. When the populations are decimated by the events, they can double the number in 1,4-4,4 years and the species has therefore a relatively modest vulnerability index, of 31 on a scale of 100.

Selene vomer was last modified: May 3rd, 2022 by Giuseppe Mazza