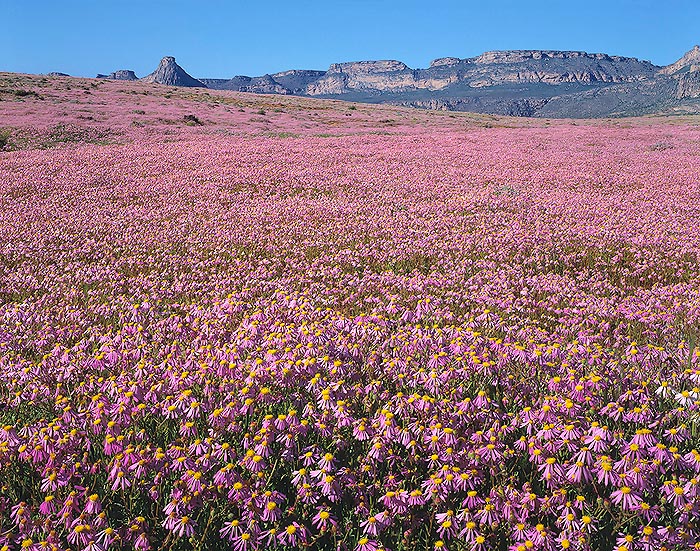 The plant is native to southern Namibia and south-western South Africa, where it grows in sandy and stony plain formations up to 1.300 m of altitude.

The Senecio arenarius Thunb. (1800) is an annual cespitose herbaceous plant, from 10 to 75 cm tall, with lobate-indented leaves with often curved margins, all the parts of the plant are covered by thick and short glandular hairs (that is, equipped at the apex of a gland secreting a frequently viscous substance).

The inflorescences are terminal with a compound flower head, which means formed by a main axis with several ramifications ending in a flower head, the typical inflorescence of the Asteraceae, formed by a crowd of sessile flowers spirally inserted on a roundish base, the receptacle, surrounded by a cylindrical involucre formed by imbricate bracts, of green colour and covered by glandular hairs. The flowers of the external ring, called ray florets, in number of 13, have the corolla formed by five petals united together, of bright mauve colour, rarely white. The ray florets are female, but have mainly the function of attracting the attention of the pollinator, like the petals of a single flower. Inside the ring are placed the bisexual flowers, called disc florets, with tubular, bright yellow and five-lobed corolla.

The fruits, containing one seed only and called achenes (or, more precisely, cypselae), in the Asteraceae, are about 2 mm long and surmounted by the pappus, the modified calyx of the flower, formed by a crown of whitish, 6 mm long, hairs, which has the function of helping their dispersion. It easily reproduces by seed, produced in considerable amount: each single plant may, in fact, produce an average of 800 seeds. Plant somewhat little cultivated in spite of its incontestable ornamental qualities and its adaptability to several types of soil, even arid and poor, to be utilized in mass or in rocky gardens, in particular in zones with climate characterized by warm and dry summers, strictly in full sun. In the compact grounds, the addition of sand and organic substance helps naturally a better growth and draining, being the plant exposed to radical rottenness when in presence of stagnating water.

The duration of the blooming is not particularly long, from late spring to mid-summer, but abundant, with at least 5-7 flowers open at the same time on each plant. It is resistant to diseases but is rather liable to aphids’ attacks. All the parts of the plant are toxic.

Senecio arenarius was last modified: May 4th, 2018 by Giuseppe Mazza