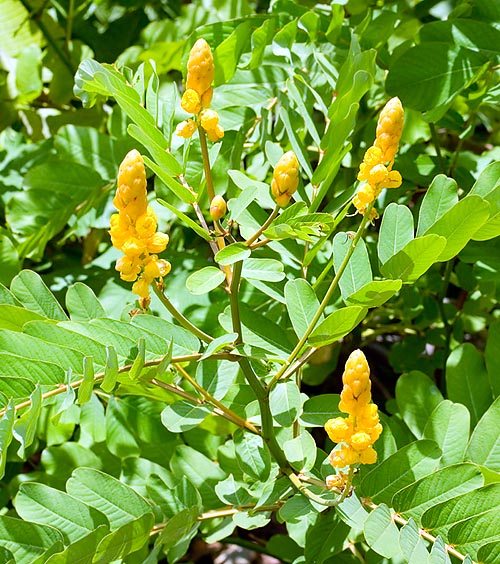 This plant is native to tropical South America (Brazil, Colombia, French Guiana, Guiana, Surinam and Venezuela), where it mainly grows at the edges of the forests, on rivers and lakes banks and disrupted, open areas, at low and medium altitudes.

The name of the genus comes from the Arabic “sanā” under which was called the Senna alexandrina Mill.

The Latin name of the species “alata” = winged, refers to the winged pods.

The Senna alata (L.) Roxb. (1832) is a fast-growing shrub, tall up to 5 m, but usually not exceeding the 2 m, ramified at the base, with erect stems having a greyish bark on which are evident the traces of the fallen leaves and the persistent stipules.

The leaves, spirally placed on a grooved petiole, are paripinnate, about 60 cm long, with from 8 to 18 pairs of linear to oblong leaflets of increasing dimensions, 5-16 cm long and 3-9 cm broad. The two leaflets of the lowest pair are spaced apart from the others and are turned backwards. The inflorescences are terminal erect, 20-50 cm long, racemes with several close together, bright yellow, flowers of about 3 cm of diameter. 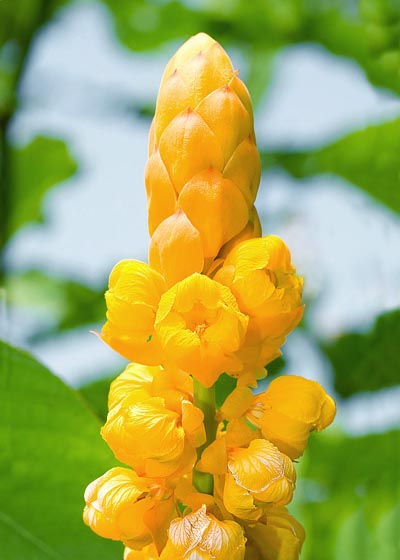 The buds are covered, before their opening, by a deciduous orange bract.

The fruits are dehiscent (opening spontaneously when ripe) pods with quadrangular section, green at the beginning, then blackish when ripe, placed almost horizontally, 10-16 cm long and 2-2,8 cm broad, “wings” included, carinate along the suture line and with two wings, by half of each valve, 4-8 mm tall, with the borders slightly wavy. The numerous seeds have an almost quadrangular shape, flat, and are up to 8 mm broad.

It reproduces by seed, to be kept in water for one day in order to facilitate its germination, before planting it in a sandy substratum, rich of humus, at the temperature of 22-24 °C. It also reproduces by woody as well as by semi-woody cutting.

It is a much ornamental species due to the luxuriant foliage and the typical inflore- scences, suitable to tropical and marginally subtropical climates, as it does not bear temperatures by a few degrees below 0 °C. In the case of a short period of temperatures standing around the 0 °C, the aerial part dies, but the same will grow up again from the foot of the plant. It loves the full sun and fertile soils, sandy, from strongly acidic to weakly alkaline, kept humid, even if well rooted plants may resist to dry periods. A drastic pruning is advisable after the blooming, in order to keep compact the vegetation and encourage the next ones.

Where the climate does not allow its permanent open-air cultivation, it may be easily cultivated as annual, seen its growth speed, by sowing in spring in a protected location; the blooming will begin by late summer and will last till the first cold. The plant is widely utilized in the traditional medicine; in particular the leaves are utilized as laxative and in the skin diseases, as well as for other various pathologies; the antymicotic and antitumoral activity of the extracts of leaves has been confirmed by laboratory tests.