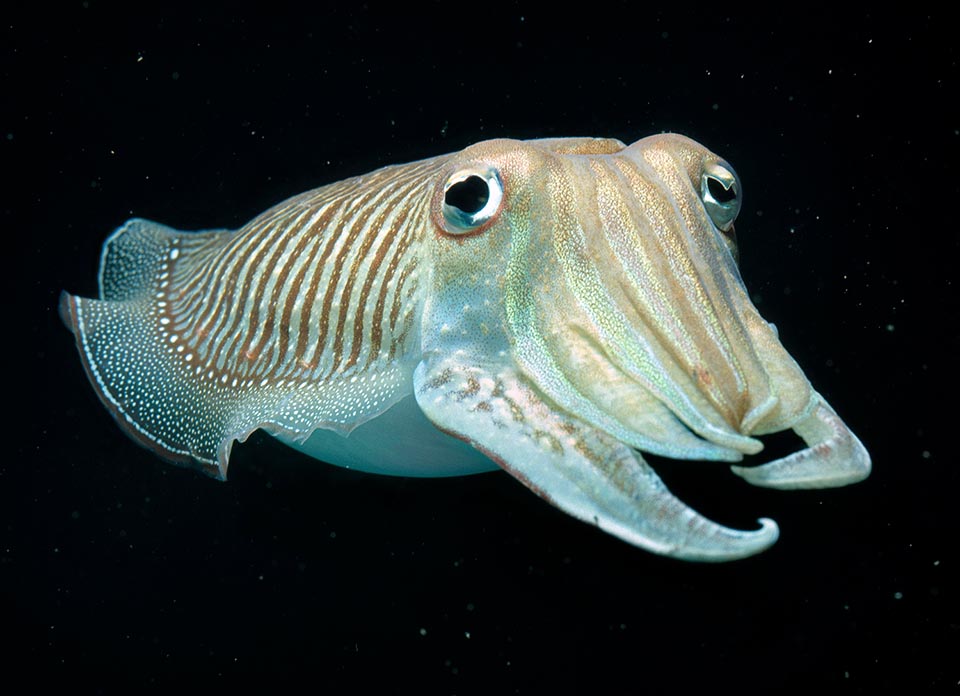 The Sepia officinalis is a mollusc present in Mediterranean and along the eastern Atlantic coasts, from the Shetland islands almost to South Africa, but the Baltic Sea © Giuseppe Mazza

The Sepia officinalis (Linnaeus, 1758), commonly known as Common cuttlefish or European common cuttlefish stands by sure among the most known extant marine cephalopods. Its extraordinary capacity to change colour and to blend in with the substrate is only one of its best-known characteristics that have rendered this animal famous.

It belongs to the family Sepiidae, the largest of the European cephalopods, counting three genera and more than 100 species. Animals characterized by a soft body and an internal calcareous shell. The present cuttlefish is probably the environmental adaptation of an ancestor developed between 150 and 200 million years ago. The acquisition of locomotion and the predation involved the evolution of specialized structures, such as the mantle, the shell and the tentacles till to get the present cuttlefish.

The etymology of the genus Sepia probably comes from the Greek “σηπία” (sepia), perhaps from the verb “σήπω” (sépo) = to putrefy, with reference to the dark liquid called “cuttlefish ink” transported in a specific internal sac.

The specific name officinalis is a medieval-Latin epithet that literally means ‘belonging to an officina’, place, usually the storeroom, of a monastery, where medicines are kept. So, when Linnaeus introduced the binomial nomenclature in the first edition of its System Naturae (1735), gave the specific name ‘officinalis’ to plants and animals having particular characteristics useful in medicine and in herbalism. 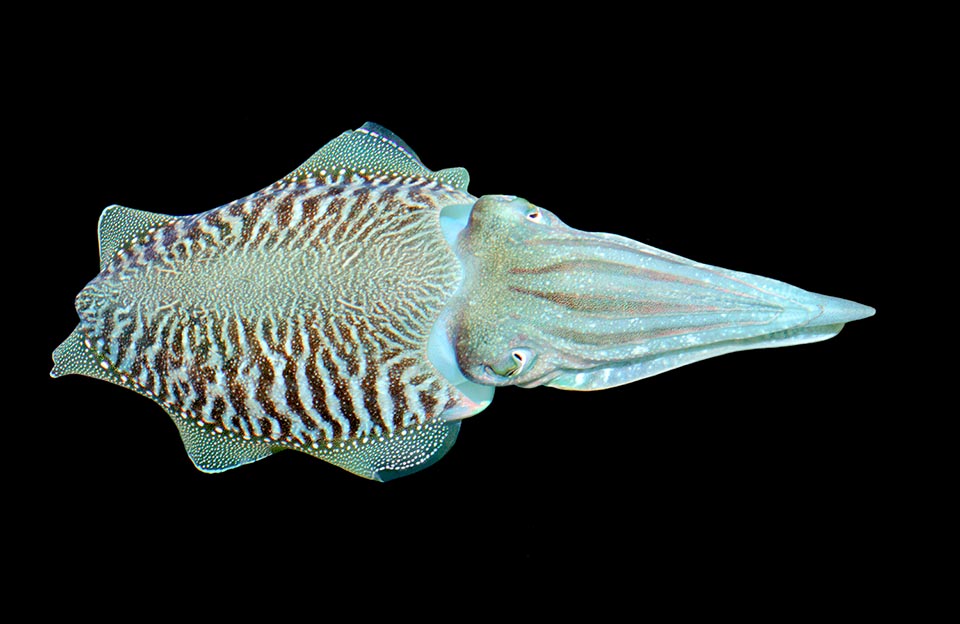 The body, separated from the head, oval, flat dorsally-ventrally, is covered by a fleshy tissue typical to the molluscs called mantle. In the temperate waters it may reach 49 cm, but in the tropics, it measures about 30 cm. The inner shell, called cuttlebone, is formed by small chambers containing liquids and gas that control the buoyancy © Giuseppe Mazza

In fact, the cuttlefish was used in the medical field. Hippocrates prescribed the cuttlefish ink as a remedy for gynecological and obstetric diseases whilst Pliny did suggest it in case of stones and alopecia, but in the modern times the cuttlefish ink is mainly utilized in the cuisine as seasoning, even if in the homeopathic medicine they continue to use it as remedy for respiratory and circulatory diseases.

Diffused all over the Mediterranean, its presence extends along the north-west coast of the African continent almost up to South Africa. It is usually found in the North Atlantic along the English Channel, from the Shetland Islands to southern Norway, excluding the Baltic Sea.

Sepia officinalis is a marine organism capable of actively swimming the lives and nourishes on sea beds mainly sandy and muddy, going down up to 200 m of depth (neritic zone). It loves the warm and temperate environments, typical of the coasts, and hardly ventures in too deep waters. When adult it leads a lonely lifestyle very important for its mimetic capacity; the formation of a school would nullify this technique as the predator might casually, in the midst of a cloud of ink or in a multitude of colours, seize another specimen. 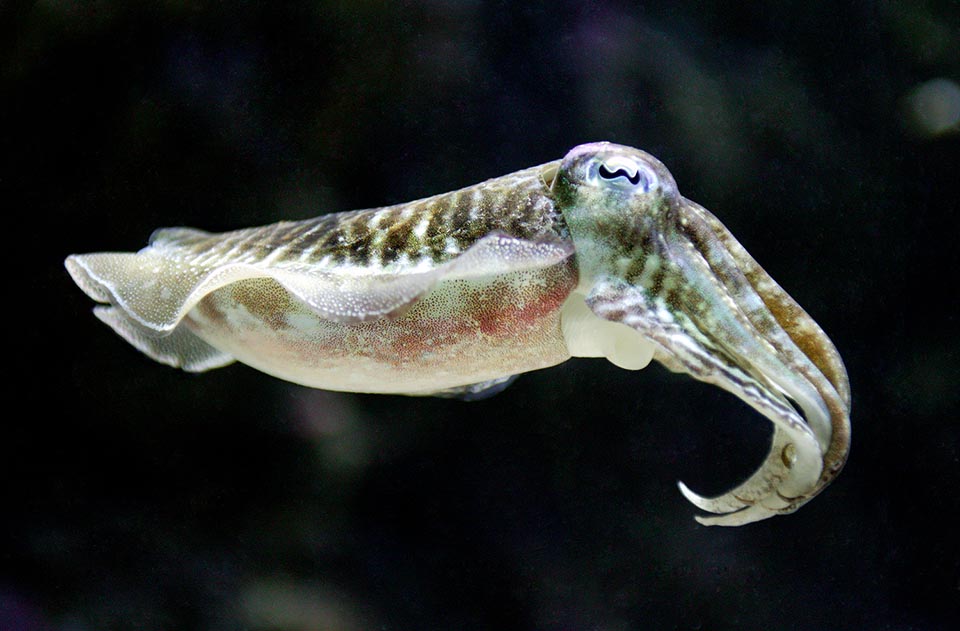 It moves thanks to water jets of an adjustable siphon, whilst the wavy lateral appendages improve stability. It has 8 small tentacles with suckers and 2 retractile and long © Giuseppe Mazza

The youngest individuals keep in coastal habitats where the sandy substratum and the weeds act as shelter against predators. Moreover, at greater depths, the pressure could destroy the frail calcareous shell still under development. Seasonal migrations have been reported in all the stocks, moving from the coastal waters in spring-summer to deeper waters (usually 100 m) in autumn-winter.

The most evident morphological characteristic is the dorsally-ventrally flattened body, of oval shape, and not fused with the head, covered by a fleshy tissue typical to the mollusks, the mantle. The dimensions may be quite different depending on the area it belongs to. In the temperate zones we have greater dimensions, with a 49 cm long mantle and an overall weight of 4 kg, whilst in the tropical and subtropical zones the mantle measures 30 cm and the weight is of 2 kg. 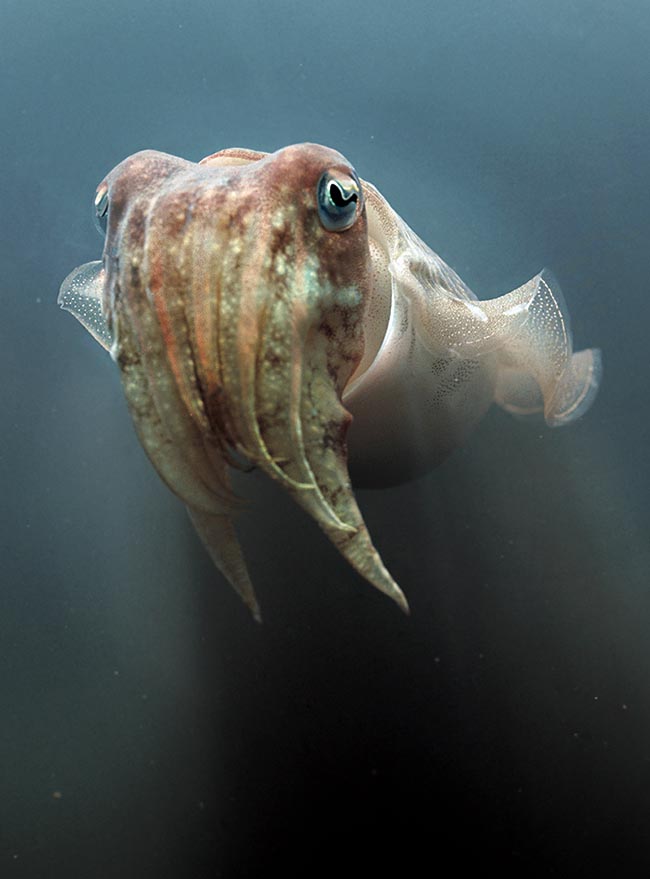 Thanks to its mantle, the cuttlefish can move rapidly with a movement by jet propulsion: its contractions and extensions eject the water contained inside through a muscular funnel called siphon, that can be oriented in all directions. Furthermore, the flattened, ribbon-like, appendages run sideways along the body of the animal, improving its stability while moving.

In addition to hosting the digestive and reproductive organs, the mantle contains a calcareous shell commonly known as ‘cuttlebone’, consisting in an intricate structure with a dorsal shell and a complicated system of ventral chambers, with calcified pillars and organic membranes. The chambers of this shell contain liquid and gas (mainly molecular nitrogen), necessary to the animal for varying its buoyancy, modifying the density and the quantity for each chamber.

Inside the mantle it is possible to also find another organ typical to the cephalopods, the ‘complex of the ink sac’, able to produce an ink that can be expelled in the nearby waters and that reveals very effective against the predators, luring their vision or even resulting irritant for some fishes.

The cuttlefishes have an excellent eyesight and, although they cannot see the colours, the structure of the two eyes is overly complex, comparable to that of the fishes due to the presence in both groups of similar ocular structures. Many malacologists in fact assert that the cephalopods are the evolutive answer of the mollusks in the competition with the fishes.

The mouth at the base of the mantle is formed by an organ very important when classifying molluscs, the radula, a spiny tongue they use to scrape the food, helped by robust jaws, of a shape similar to the bill of a parrot, with which they rip the preys. Around the mouth stand eight small tentacles plus two larger ones, all furnished with suckers, used for the predation and for the mating. The number of tentacles allows to differentiate the decapodiformes cephalopods (such as the cuttlefish, squid and calamari) having ten tentacular arms, from the octopediform ones (octopus, baby octopus), having eight arms.

The cuttlefishes, like all cephalopods, are masters in disguise and can alter rapidly their look utilizing chromatic organs neurally and hormonally controlled such as the chromatophores, the iridocytes and the photophores, that show various functions, from mimicry and defense to courting.

The chromatophores are contractile pigmented cells containing granules of the pigment (red, orange, black, yellow, blue) surrounded by small radial muscles that allow their contraction, granting the cuttlefishes the famous characteristic of being able to adapt to the colours of the environment. The iridocytes do not contain pigments but have the property of refracting the light at a specific wavelength every time the chromatophores contract, giving an iridescent appearance of silvery, bluish, or greenish colour, that changes according to the incidence of the light rays. Finally, the photophores are bioluminescent organs containing photogenic cells producing light.

The cuttlefish is a voracious nocturnal predator of a huge variety of animals. It mainly nourishes of crustaceans and fishes but also gastropods, polychetes, nemerteans and, though to a lesser extent, other cephalopods. 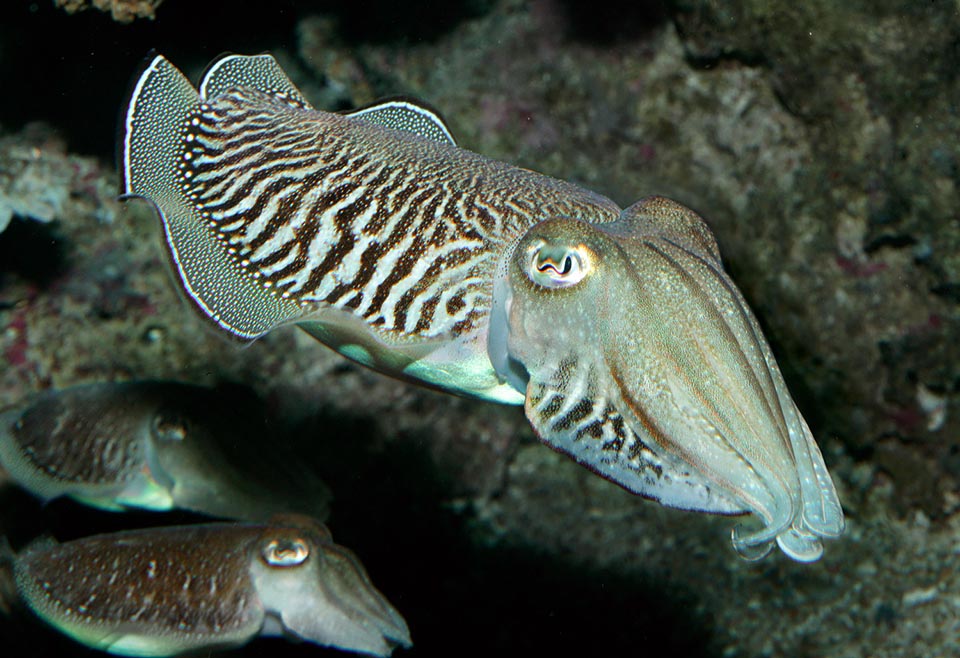 Cuttlefishes, like all cephalopods, are masters in disguise to get unobserved, surprise the preys and send signals while courting © Giuseppe Mazza

It ambushes the preys mimetized in the substratum or surprising them silently behind their shoulders. Moreover, recent studies show the presence of toxins (cephalotaxine) in the saliva for paralyzing the victims.

Such a vast number of predators has allowed to develop defensive strategies involving a big number of chromatic, structural and postural components; in fact, modifying the colour of the livery and utilizing particular postures and movements, the cuttlefishes are able to produce a varied repertoire of body patterns in order to deceive or scare the predators depending on the species encountered. It is not by chance that we talk about a real body language that since ever has fascinated and still intrigues the researchers.

The Sepia officinalis is one of the first cephalopods whose reproduction has been studied and, still now, remains one of the most known.

Unlike other molluscs, especially gastropods, where the hermaphroditism is very pronounced, here the males and the females have well distinct sexes and display fantastic and elaborate systems of courting that take place in deep waters.

The males, after fighting aggressively with each other to contend and protect the females, attract them with coloured bands running along the body. The females, enchanted, then show a grey colour when ready for coupling. 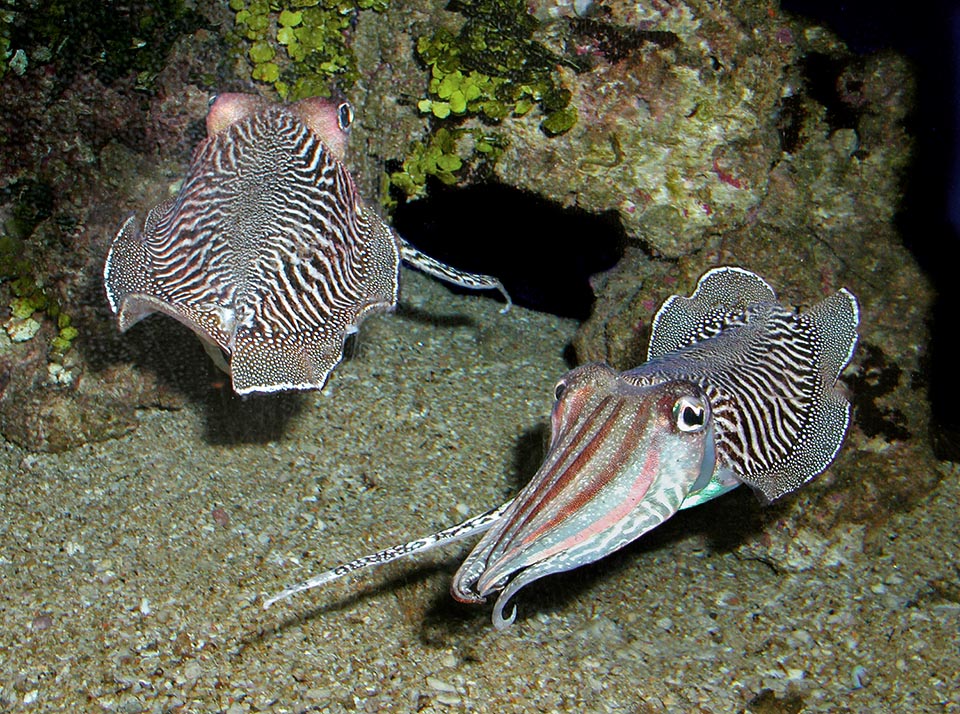 In the males one of the 2 long tentacles, called hectocotylus, become the organ for mating. In fact it serves for carrying spermatophores in a specific cavity of the female © Giuseppe Mazza

In the male one tentacle, called hectocotylus, has undergone a strong modification, becoming the organ used for mating. With this, after the courting, the male transports in fact into a cavity of the female mantle, its own spermatophores, some sperms wrapped together shaped like a baseball bat.

Depending on the size, the females carry even 4000 eggs. They may accept the sperm of various partners and decide which one will fecundate their eggs; a phenomenon known as polyandry. They lay the eggs on the substratum of the seabed where they hatch, depending on the water temperature, after two months of incubation.

The vital cycle of Sepia officinalis is not very long. It reaches sexual maturity in 14 to 18 months and has a life expectancy of about two years. Usually, the males are the longest-lived, whilst most of the females pass away after laying eggs.

Though actively fished, the vulnerability index of the European common cuttlefish is not too high, with a value of 30 on a scale of 100. Nowadays, they are looking for innovative forms of management in order to favour the sustainability processes especially in the coastal areas where the juvenile species are more abundant.