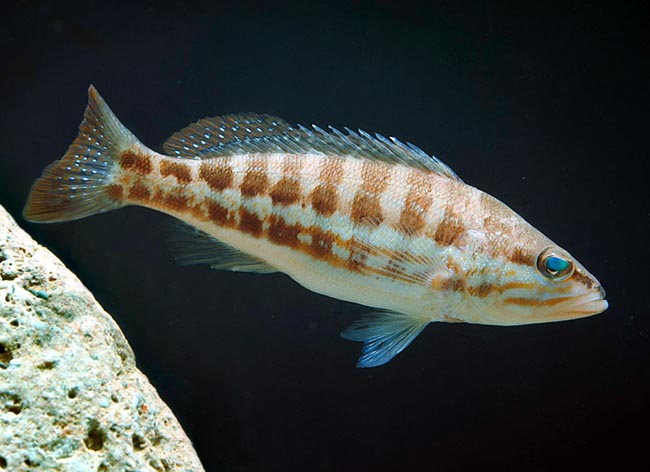 The Comber (Serranus cabrilla) common in Mediterranean and East Atlantic, is a hermaphrodite species © Mazza

The Comber (Serranus cabrilla Linnaeus, 1758) belongs to the class of Actinopterygii, the ray-finned fishes, to the order of Perciformes and to the family of Serranidae.

The name of the genus comes from the Latin “serra” = saw, with reference to the saw-toothed dorsal fin, not to mention the various spines. The specific epithet cabrilla is the diminutive for the Latin word “capra” = goat, in reference to its way of swimming, with twitchs and jumps, like a kid.

It is present all over the Mediterranean and in the northern part of the Red Sea. After Gibraltar Strait, it has an extremely vast diffusion on the eastern Atlantic coast, from the North Sea to the Cape of Good Hope, including the Azores, Madeira, Cape Verde and the Canary Islands. Then, it goes northward along Africa, in the Indian Ocean up to Mozambique.

Unlike the Serranus scriba who keeps stuck to the rocky coasts, in relatively shallow waters, the Serranus cabrilla loves muddy bottoms and reaches the 500 m of depth, but can also share with its congener the prairies of Posidonias (Posidonia oceanica). 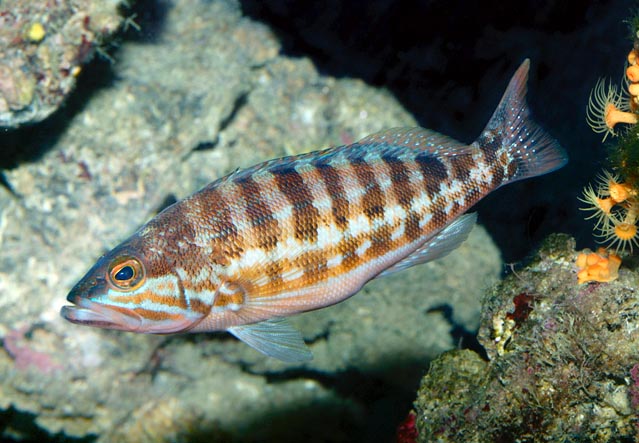 The livery is mimetic, very variable, and depends on the season, age and location © Giuseppe Mazza

Like this one, it loves the solitary life with its den, maybe under a stone, at the centre of a small hunting territory.

Like this one, it loves the solitary life with its den; it measures about 25 cm, and even less in the Mediterranean.

Also in this case the pectoral fins are spatulate, but the caudal is emarginate. Also, the operculum shows 3 spines looking towards the tail and the preoperculum is jagged on the rear edge.

The colour changes depending on the seasons, the age, but, mainly, on the environment where it lives. For mimetic reasons, the specimens of the muddy bottoms have faded tints, whilst those living amongst the corals brighten their colours and in the posidonias beds the vertical bands become more marked. In the whole, we can say that the livery goes from the reddish-brown to the yellow, with 7-9 dark vertical bands, crossed in the middle by a horizontal clear stripe, relatively wide, and by other two, thinner, less evident. They concern also the operculum, where their tendency to the light blue is more marked. 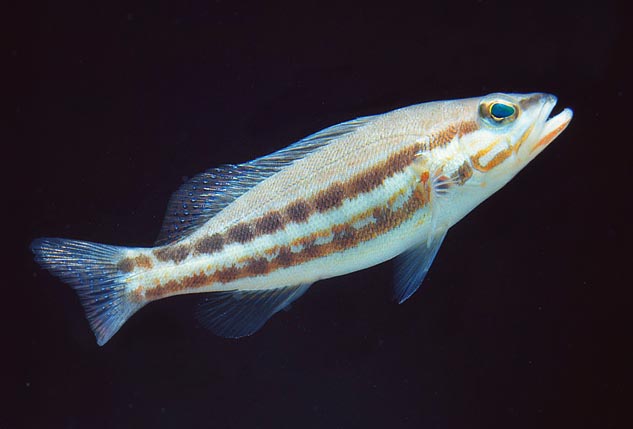 Youngs have only two longitudinal bands, those living on muddy bottoms at 500 m have faded colours © Mazza

The eye, seen the depth it can reach, is rather big and the mouth resumes, grosso modo, the scheme of the painted comber with acute thin teeth, alternated with bigger solid caniniform ones, rearward-facing.

Not less greedy than this last one, it hunts small fishes, cephalopods and crustaceans, enriching, at times, its diet with some annelids.

Like the Serranus scriba the Serranus cabrilla is a hermaphroditic species. The eggs and the sperm mature at the same time, and the self-fecundation is therefore, theoretically possible.

In the Mediterranean, it reproduces during the summer, starting from the 17-18 cm of length.

The eggs are pelagic and when the young reach the 2,5 cm, they already look like the adults, with two longitudinal bands going from the head to the tail.

The vulnerability index of this species is of 36 over 100.