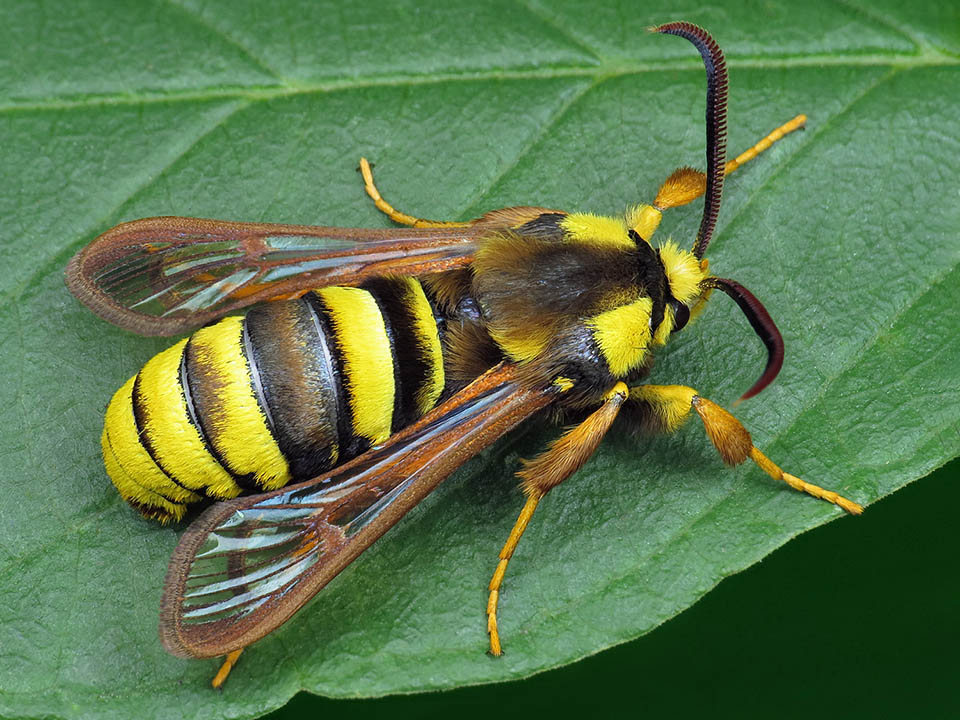 The Hornet moth or Hornet clearwing Sesia apiformis (Clerk, 1759) is one of the about one thousand species of Lepidopters of the family Sesiidae or Aegeridae that, due to some morphological characteristics, are considered as standing among the most primitive of the order Horner.

The most evident morphological characteristics is represented by the narrow and elongated shape of the wings that lay bare the veins and are in good part transparent due to the absence of the coating scales. Moreover, the showy colouration with yellow or red bands of the abdomen, covered by scales, make adults look like Aculeate Hymenoptera, like the European hornet (Vespa crabro) or Diptera Tabanidae.

This mimicry is defined as of pseudo aposematic type as the adults, armless, imitate insects having a sting or a pungent mouthpart, also reproducing its characteristic buzzing during the flight. Finally, the body of some species has an unpleasant or toxic taste to predators who avoid it after a negative experience; therefore, the mimicry is defined as “warning” aposematic. 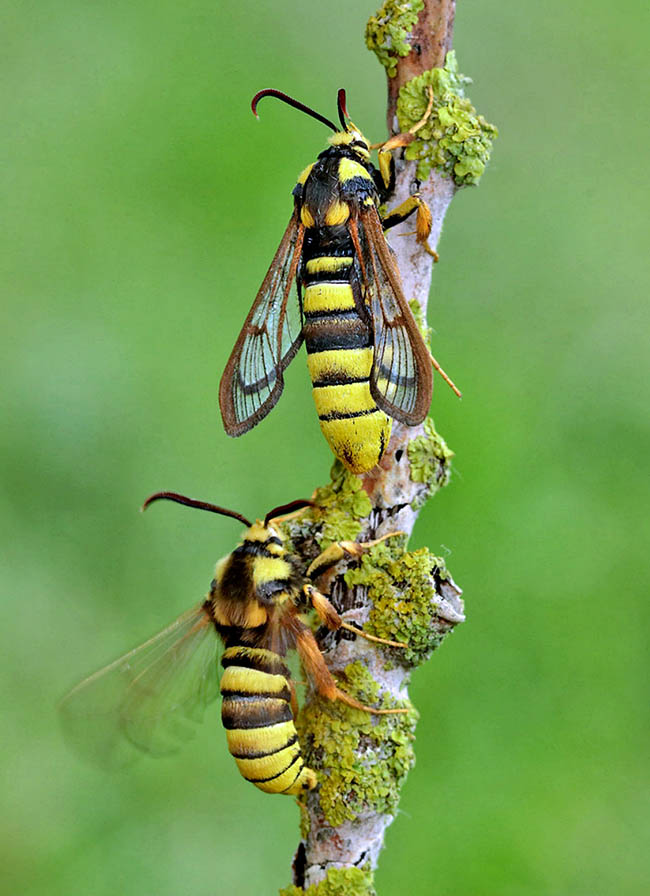 The male, attracted by the females sexual feromon, is always on the move. Here is chasing one of them on a branch © Iain H Leach

In the terminal part of the abdoùen is present a showy tuft of scaly hairs.

The chrysalises have the movable back equipped with crowns of thorns. Normally the eopupe move to the last tract of the tunnels where, pupate after having done the flickering hole.

The name of the genus Sesia comes from the old Greek “σής” (sés), clothes moth, harvest mite, whilst the term apiformis, with the shape of a bee in Latin, refers to the resemblance of the adults with the Apoidean Hymenopterans.

The Hornet moth is common all over Europe and is common in some areas of Central Asia, of Siberia and of Middle East. It has been accidentally introduced in North America where it has acclimatized.

Sesia apiformis finds optimal development conditions in swampy or humid environments, where the larvae dig tunnels especially into the wood of poplars and willows, and more rarely, of birch or lime trees.

The greatest damages are caused to the young plants in the industrial poplar groves and in the nurseries often together with the larvae of the Paranthrene tabaniformis, another Sesiid. The affected plants, compromised in their vitality and their growth, in fact may be cut off by the action of the wind.

In the infested zones the woody tissues become hypertrophic with consequent characteristic enlargement in the basal part of the plant.

The tunnel, vertically dug by the larva, has a cylindrical shape, and is about 10 cm long, if done in the young plants, whilst in the big trees, that can host more larvae, the tunnels can even reach the length of 60 cm.

The diffusion of the cultivation of the Canadian poplar (Populus × canadensis), appreciated for its clear, slow-burning, wood, and particularly suitable for making matches, has enhanced the biotic potential of the lepidopter who has found in the specialized poplar groves optimal development conditions and has caused serious damage. 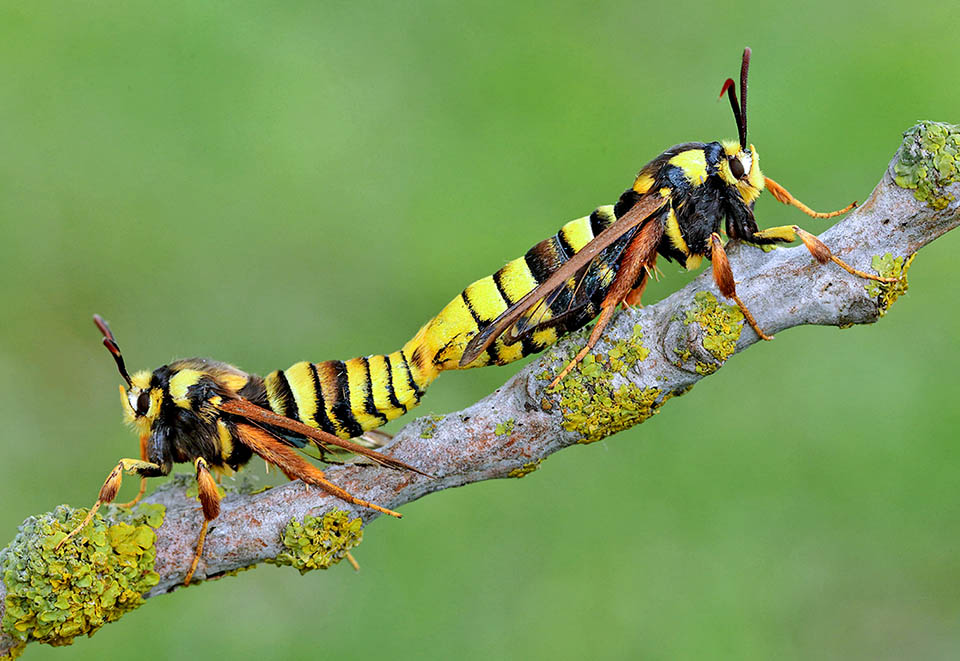 This, now mating, is much less active. Bigger, doesn’t move much from the place where was born, limited to spreading from a well exposed position its call © Iain H Leach

The adults have the body of basically yellow colour with tawny-brownish parts and with ample brown bands. The females are 18 to 24 mm long. Normally, the males do not exceed 20 mm.

The head is yellow above and rusty brown below. The antennae, of black colour, are flat and are slightly enlarged towards the distal part, similar to those of the aculeate hymenopteran they imitate. The proboscis is short, suitable for sucking nectar and  other humours.The compound eyes are of medium size and the ocelli are relatively large.

The thorax is blackish brown with a front blue band and two big yellow trapezoidal spots on the fore sides. 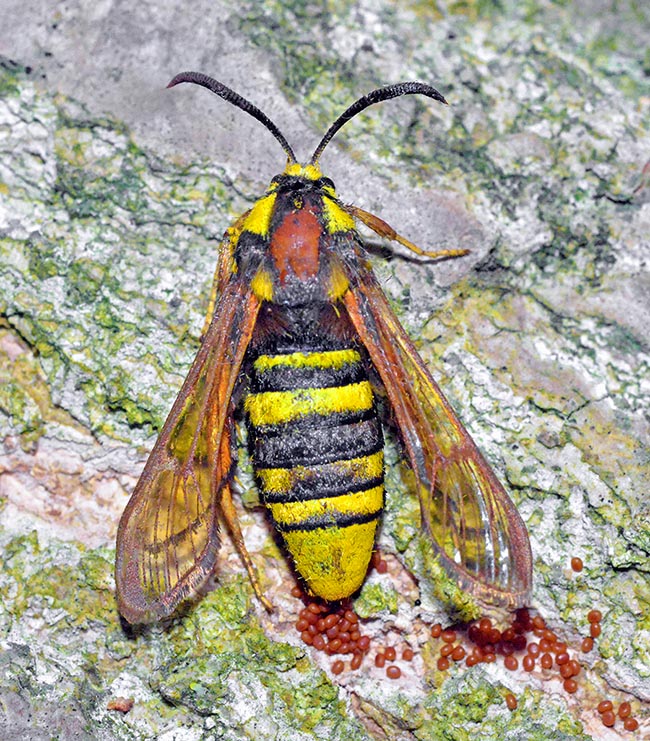 The wings are mostly transparent with a rusty fore margin, the veins and the marginal fringe of hairs are reddish.

In the basal part of the fore wings is present a small yellow dot.

The femurs of the legs are yellow whilst the tibiae and the tarsi are rusty yellow. The first and the fourth segment of the abdomen are black whilst the remaining ones are yellow, with black apical part.

The egg is yellowish brown or reddish, of ellipsoidal shape, just under one millimetre long, with robust chorion.

On the back of the body is present a darker longitudinal median line; laterally are present the respiratory stigmas of dark colour.

The eopupa, near the exit hole of the tunnel, realizes an elongated cocoon with silky threads that incorporate leftover stuff.

The chrysalis, about 3 cm long, is of reddish brown or yellowish colour, and is equipped with a double series of spines on the abdominal segments.

In the southern diffusion zones of the Lepidopter, the first adults do flicker in late May, but the peak of the flights occurs from mid June up to early August.

The adults are active also during the day; their flight is fast, in a straight line or around the base of the plants where, after mating, the females oviposit.

Both sexes are attracted by some substances such as the diammonium phosphate. During the night, they are attracted by the lights (positive phototropism). Chemo-attractive and bright traps have been utilized in the past to capture the largest possible number of specimens of Sesiids, for the purpose of the fight. 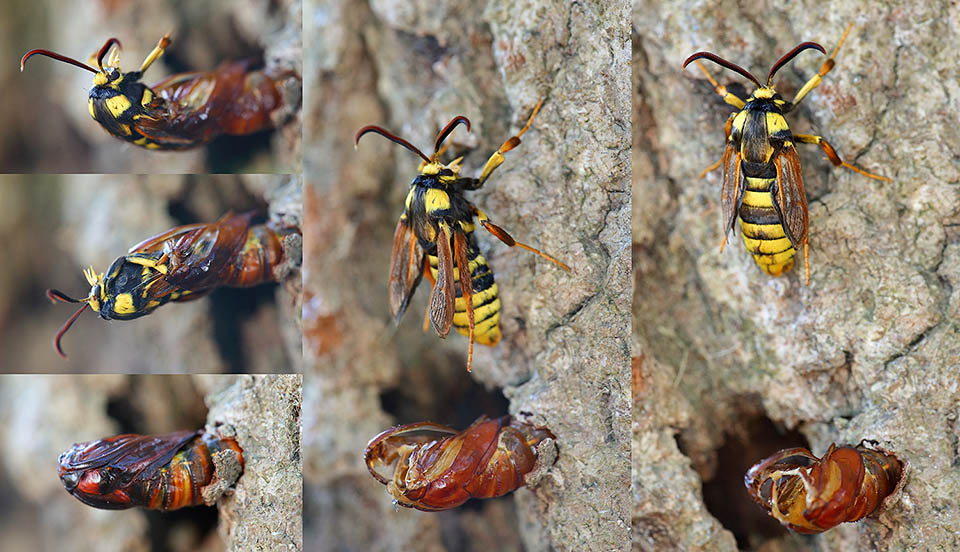 The just born larvae penetrate the pith of the tree where they winter. In spring they grow digging winding tunnels in the wood and in autumn they build a cocoon where to spend a second winter. During the following spring, or in the following year if the climate is rigid, they dig an exit hole and pupate. Here is the flickering © Mike McKenzie

It has been synthesized the sexual feromon with which the females do attract the males who, following the odorous trails, can reach them even from remarkable distances. This attractive, placed inside suitable traps, is utilized for monitoring the populations in a given period.

The fecundated females lay up to a thousand of isolated eggs they fix in the cracks in the bark or on the exposed parts of the large roots. As soon as shelled from the egg the larvae, equipped with a robust chewing mouthpart, begin to dig subcortical tunnels and penetrate the medullary region where they hibernate.

In the following spring they resume their trophic activity and dig winding tunnels in the wood directed downwards until they reach the roots. 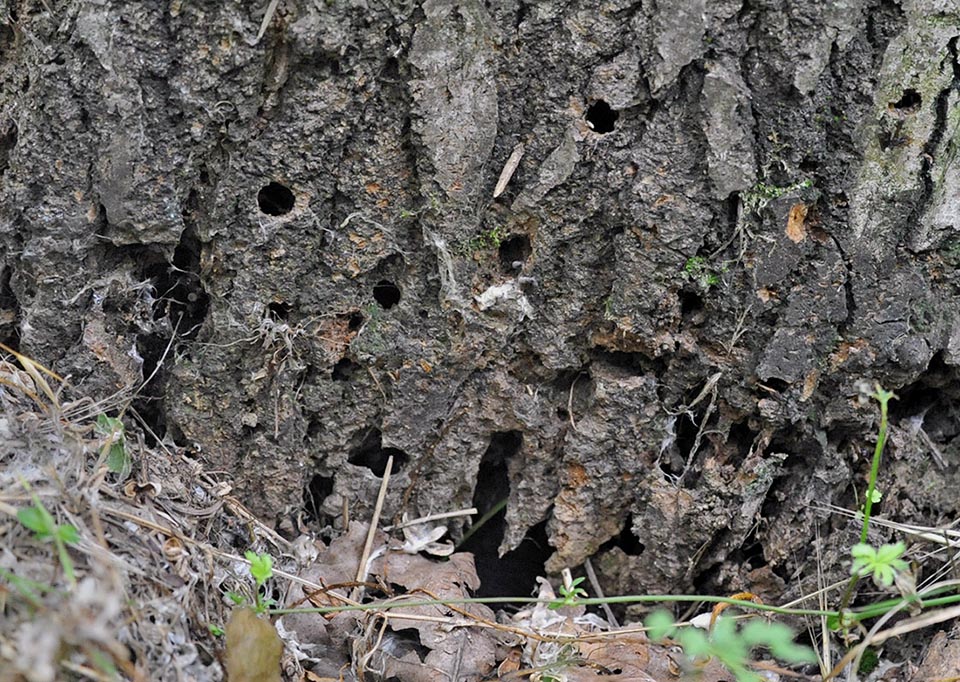 Base of a poplar drilled from the exit holes. In the industrial poplar groves the damage may be major, at times causing even the fall of the tree © Gianfranco Colombo

During the autumn they get mature and build up the cocoon where they will spend the second winter. In spring they resume the activity and do an exit hole near which they become chrysalis and starting from May or June they begin the adults’ flickerings.

From the holes of the larval tunnels gets out abundant leftover stuff that, in the young plants, along with the enlargement of the trunk, reports the presence of the larvae.

The chrysalis can perform small movements thanks to which it reaches and protrudes the front of the body out of the hole of the larval tunnel. This position favours the flickering of the adult without damage to the body.

The development from egg to adult is completed in two years but, if the local conditions are adverse, it can go on even longer and, in this case, the third winter period is overcome by the chrysalis protected by the silky cocoon secreted by the eopupa. 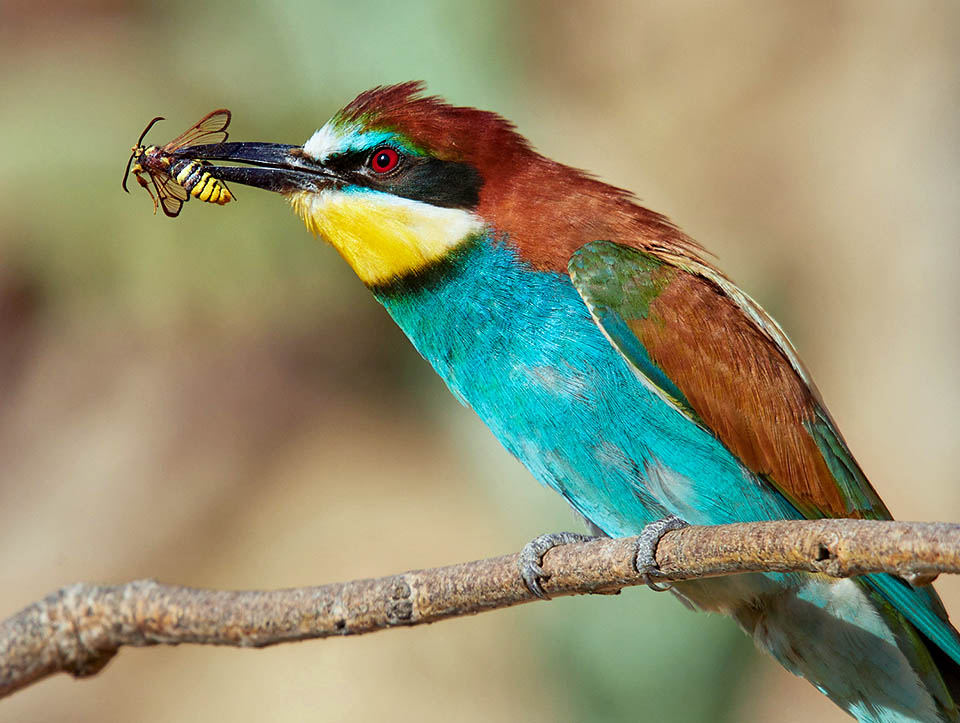 The showy warning livery of the adults is of no use for insectivorous birds eating also bees and wasps, such as the European bee-eater (Merops apiaster).