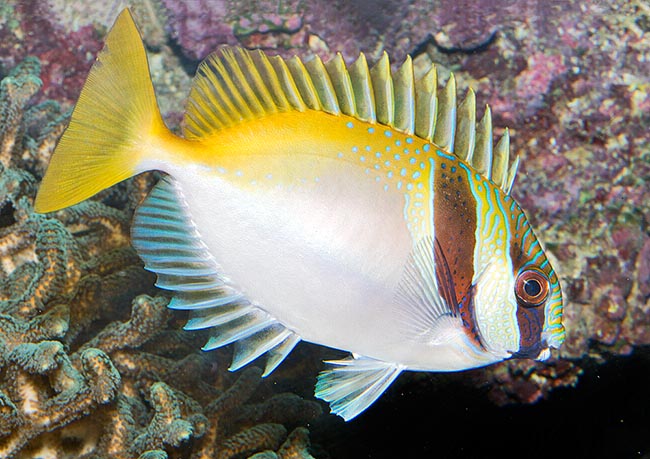 Prima facie Siganus virgatus is a harmless aquarium colourful fish, but he who approaches it must pay attention to the numerous spines, especially the dorsal ones, imbued with powerful and unexpected poisonous mucus © Giuseppe Mazza

The unusual and colourful Double-barred spinefoot (Siganus virgatus Valenciennes, 1835), belongs to the class of Actinopterygii, the ray-finned fishes, to the order of Perciformes and to the family of Siganidae, counting only the genus Siganus with 29 species.

They are the so-called rabbitfishes, due to the profile of the head with the characteristic protruding lips done for grazing in the seagrass meadows.

Marine, or at the most brackish water fishes, that rarely exceed the length of 40 cm and at times have an important role in the human feeding.

The specific name virgatus comes, conversely, from the Latin “virga” = verge, with reference to the two characteristic diagonal dark bands at the level of the eye and between the back and the operculum. 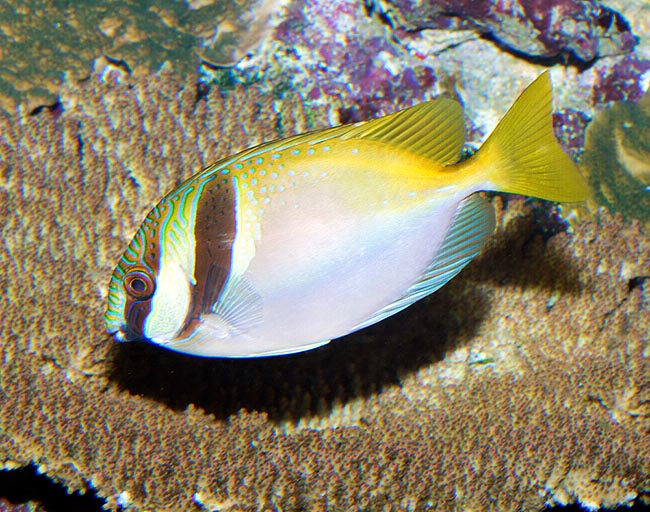 The double-barred spinefoot is at home in the tropical waters of the eastern Indian Ocean and of the western Pacific ones.

It lives in shallow water, even turbid, not under the depth of 20 m. As scenery it has the madreporic formations it cleans from the infesting filamentous algae, but mainly the rocky coasts covered by weeds it unabated scrapes, with its interlocking small teeth, whenever the tide allows it. It accepts the turbid and brackish waters, sneaking into the estuaries, and the juveniles often do grow up among the intricate roots of the mangroves.

The oval body, flattened on the sides, may reach the 30 cm, but usually the fished ones do not exceed the 20 cm. 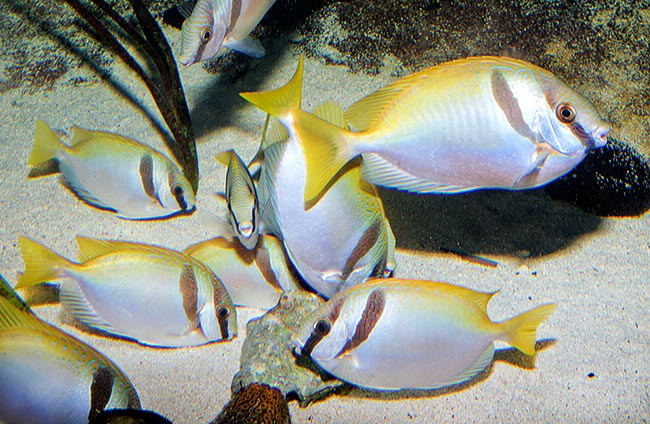 It is to be noted that, like other Siganidae, the spiny rays are imbued with poisonous mucus that causes very painful wounds. Only remedy for those affected is to dip them imediately, when possible, in warm water, being the poison thermolabile.

The Siganus virgatus has two liveries: one more or less gaudy for the day and a second one, mimetic, in case of danger and for the night.

In the first one we not at once the two large dark diagonals close to the head, with at times brown up to reddish shades.

The clear sides, with sparkling metallic reflections, fade yellow towards the back, as well as the tail, and ventrally turn to blue. The head is adorned with arabesques and blue small dots, more evident in the adults, that interest less intensely also the back. 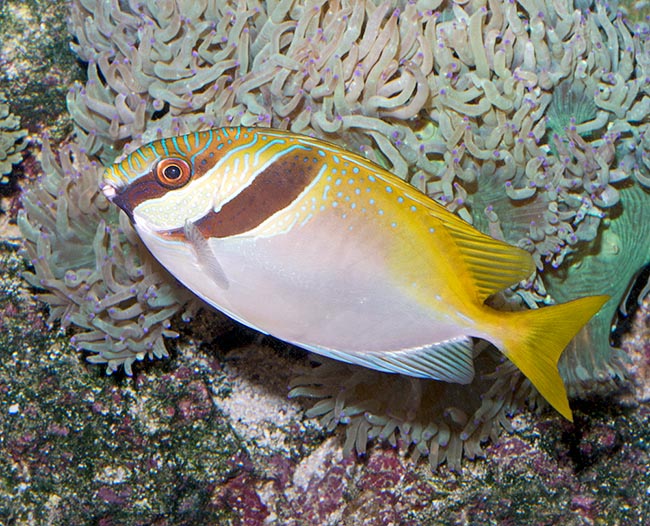 The reproduction occurs in open seas with huge number of eggs abandoned to the currents. The young grow fast, getting often food and shelter among the mangroves roots. It is not endangered © Giuseppe Mazza

But by night or when the fish is very scared, the look changes completely: all colours disappear immediately and give way to big greyish spots, with undefined contours, on a pale background.

The double-barred spinefoot is a gregarious fish, but we may meet also adults living isolated or in pair. The diet is omnivorous, mainly vegetarian, enriched often by small crustaceans and molluscs.

The reproduction occurs in open seas with a huge number of eggs abandoned to the currents. The fries, who swim in the surface, often form enormous crowds. The resilience is excellent: in fact 15 months are sufficient to double the populations decimated by the events.

Even though the Siganus virgatus is locally fished for the table and some juveniles end up in the domestic aquaria, it is not therefore an endangered species. The vulnerability index, enviable, is of only 23 on a scale of 100.

Siganus virgatus was last modified: May 3rd, 2022 by Giuseppe Mazza