The unusual and colourful Foxface or Rabbitfish (Siganus vulpinus – Schlegel & Müller, 1845, known also as Lo vulpinus), in French, “Tête de renard”, is a saltwater fish with a flamboyant livery. Once, this fish was afferent to the genus Lo, one of the shortest of the zoological systematics, composed by a very modest number of tropical species, why an ICZN taxonomical revisitation is underway. Nowadays, the genus Lo has been replaced with the genus Siganus, even if some authors, especially ichthyologists of Japanese school, keep it still in use. However il belongs to the class of the Osteoichthyes (Osteichthyes), subclass of Actinopterygians (Actinopterygii), the order of Perciforms (Perciformes), family Siganids (Siganidae) and genus Siganus or, rightly, Lo. Besides the genus Siganus , ex- Lo, the family of the Siganidae includes the genus Siganites. The total number of the species, considering both genera, is of about thirty. They are medium-sized fishes. The common name of “rabbitfish” comes from the particular shape and profile of the snout present in the Siganus vulpinus, as well as in the other members of such family, which reminds the snout of this pavid, double-toothed, lagomorph; as matter of fact, the line of the snout is uninterruptedly curved downwards.

This perciform, like its conspecifics and congeners, frequents mainly coastal waters, even if, not infrequently, it penetrates into the mouths of the rivers or into brackish waters; a couple of species live also in fresh waters. Their food consists essentially of reef small animals, algae and aquatic plants, which they manage to break thanks the sharp tooth. None of these species, therefore the foxface too, is sought for by the fishermen as food, because the fleshes do not have any value, on the contrary, some of these species are considered as poisonous. Contrariwise, they are fished for being sold as ornamental fishes.

During the eighties of the last century, the ichthyological biologists have done interesting observations on the phenomenon which is underway since the end of the XIX century, of the penetration of these fishes into the Mediterranean from the Red Sea; Since 1869, year of inauguration of the Suez Canal, a two species of these rabbitfishes, the Siganus rivulatus and the Siganus luridus, together with many other fishes of various families, have reached the “Mare Nostrum”, through this access route, settling there permanently; an instance of alien colonization, defined as “Lessepsian migration”, which is the entrance and the stabilization of animal and vegetal species from the Red Sea to the Mediterranean one, taking advantage of the Suez Canal. 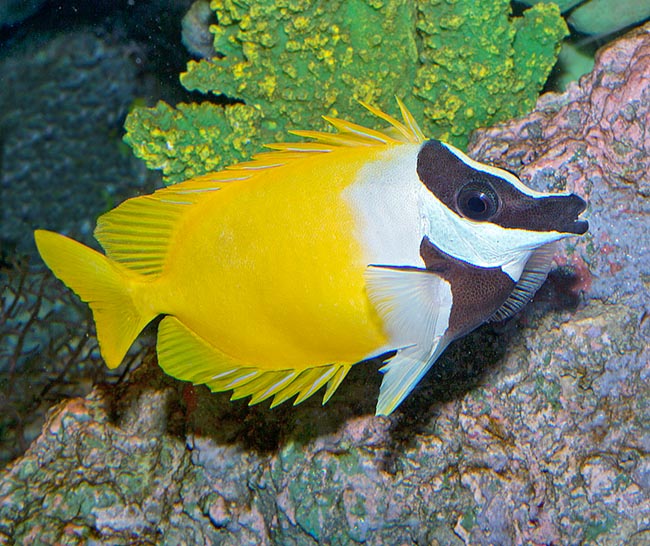 The Siganus volpinus, not edible, has spines connected to venom glands © Giuseppe Mazza

Utilizing this canal, the siganids have therefore reached the Turkish waters after having coasting the Middle Eastern regions.

By the time of the Second World War, they have reached the Greek archipelagos and the Cyclades; though having settled since little time in these areas, they did not waste too much time to meet the local fishermen, with their poisonous stings. To know up to where they can go, along with other Red Sea fishes, westwards in the Mediterranean will be established with further observations.

The skeleton of the skull does not have particular characteristics; there is absence of somatic sexual dimorphism between the sexes. The livery is characterized by a very bright lemon yellow colour on the dorsal, ventral, caudal and anal fins; the caudal peduncle and the whole body, strongly compressed, flattened and tall, are of white colour. Black dots are present and they colour the dorsal part of the snout, from the head to the tip; also the throat and the cheeks are black coloured, and there is present a round dots of the same colour in the supero-posterior part of the back. The eyes are big and dark.

Not much is known about the life way and habits of the Siganus vulpinus, like for the other members of the family of the Siganidae, the same applies to their biological cycle. The data currently in possession of the ichthyological bologists tell us that this fish has a calm character, that he tends to continuously explore the reefs and the relevant coral ravines, looking for food particles. The social relations with the other members of the group where it is gregarious, become tense when is coupled for reproducing, otherwise, in other circumstances, it is fairly sociable. Temperatures between the 24-30 °C are needed for living well. In case of attack by a predator, like a moray eel, it pretends to be dead, loses all the colours becoming grey with some blackish dot, then lies on the bottom and breathes very slowly; doing so, the predator ceases the attack and after a few minutes all goes back to the normality.

It does not reproduce in aquarium, and there are no data about its reproduction in nature. The vulnerability index of this species is of 24 over 100.