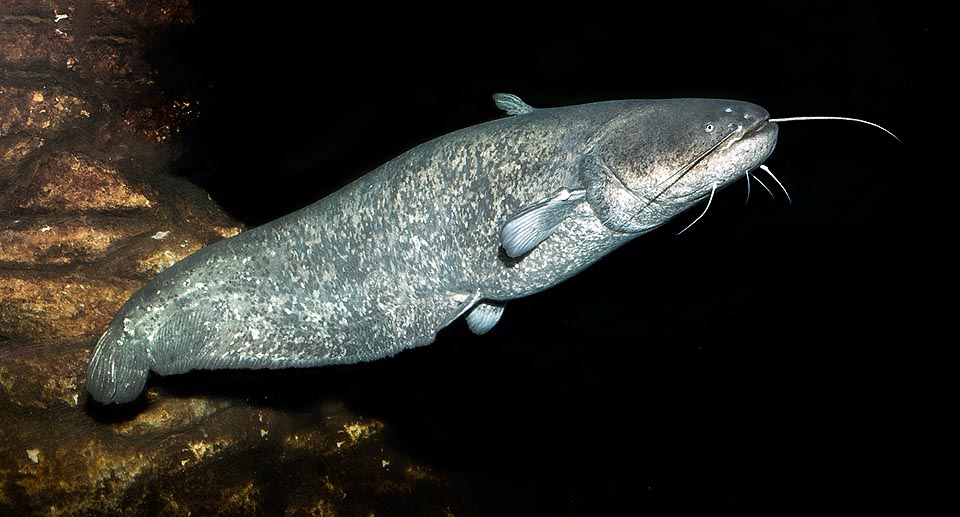 A set of elongated barbels, present on both jaws, completes the characteristics of the Siluridae.

The name of the genus comes from the Latin “silurus” that means torpedo indicating the big freshwater fish. The name of the species “glanis” has possible Etruscan origin and means, in that language, “muddy river”. 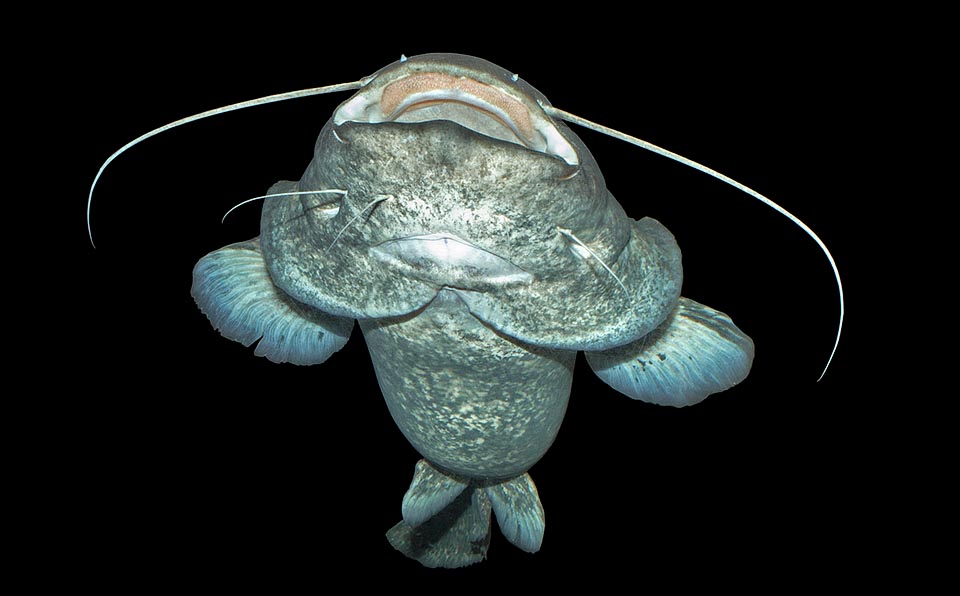 Of presumable Danubian origin, this fish has diffused in almost all European rivers and lakes, often introduced by the man, as well as in the Caspian and Lake Aral basins, colonizing also the Anatolia, the southern part of the Baltic countries, and even areas of Great Britain and of Spain. In Italy it has been introduced since about fifty years and now has colonized almost all the waters of the Po River basin and the rivers Arno and Tiber. New sightings continue to occur being its range progressively expanding.

The Silurus glanis lives in all the waterstreams with lmoderate currents and in artificial laks and canals, preferring not too deep seabeds, rich of rifts or of other types of shelters, where it spends the days in semi lethargic state. 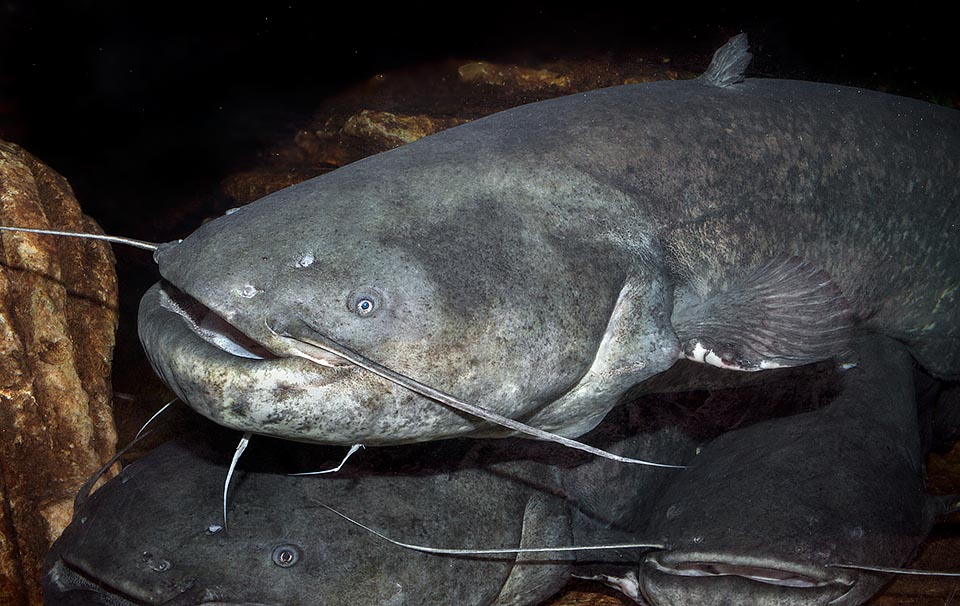 Enormous mouth, fleshy lips and powerful jaws with tiny teeth that do not forgive the sucked prey

The maximum reported length is of five metres, but the specimens presently found in Italy rarely do exceed the two, also because the bigger specimens are the oldest ones and due to its age that may reach the 80 years, clearly those present in Italy will have to grow up for some decade more before reaching record dimensions. 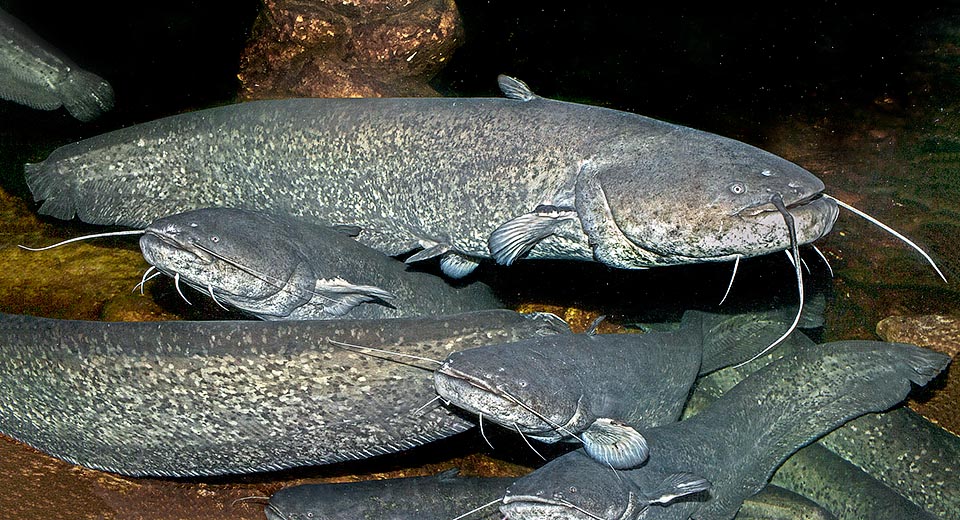 The catfishes spend the day in impenetrable hideouts and get out hunting by night; amphibians and young fishes but then also small mammals and aquatic birds © G. Mazza

The other factor limitating its growth is the quantity of food. Our inland waters have very impoverished and this dearth by sure is not favouring important dimensions.

The profile of the fish might recall a Neolithic knife with a massive handle and long blade (specifying that in that time the blades were short).

The fore part is robust and almost flattened on the head. What stands out most are the formidable barbels, about twice long than the head, that protrude laterally in front of the eyes. Under them an ample mouth with fleshy lips and strong jaws with tiny teeth, who do not forgive those being aspirated. 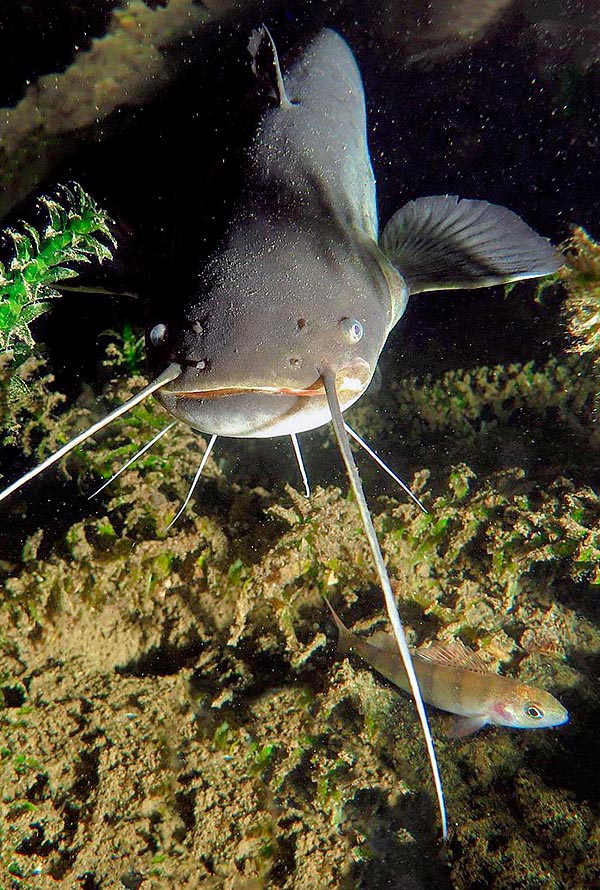 On the outer sides of the chin two more couples of barbels complete the range of the sensors. Two small eyes, with circular pupil, stand out laterally just over the oral margins.

The other “accessories” are proportionally tiny: two pectoral fins little worth of the size of the fish, two small pelvic fins and a sort dorsal, at times erect to serve as pivot for a turn.

The colour is dark grey on the back and goes down on the sides with a moire where clear and dark colours mix irregularly, to end in an opaque white belly.

Depending on the habitat the colouration may vary adding more or less accentuated shades, tending green and yellow.

The pale abdomen is the surprises zone: rarely deflated, it often shows protrusions that speak volumes about the appetite of the fish. The skin is smooth, has no scales and is covered by slippery mucus.

Introduced in Europe and in many European parts for ludic purposes, to give big satisfactions to the amateur fishermen, it has not taken too long, man accomplice, to expand like a wildfire.

It can be found hidden under many sunken boats or in the woodsheds (masses of brushwoods thrown in water to favour the reproduction and the growth of the fishes), in fissures of the rocks, in the impenetrable tangles of long weeds and in all the sites, mud included, that may offer a safe daytime shelter.

During the night it roams wandering and diving the big head on the preys that the long barbels, always busy, have revealed.

The prey that ends up between its lips has no escape. In vain basses and punkies erect the sharp stings on the back. By closing strongly the jaws, it gradually chokes the victims closing their gills while, simultaneously, rotates them in way that the spines are not opposite to the way leading them to the stomach.

While growing in size, also the dimensions of the preys increase. Besides the usual diet of fishes and amphibians, the biggest specimens seize also small mammals and waterfowls.

When meeting the man it shows indifference even if, when the approach is excessive, escapes with a lightning turn. 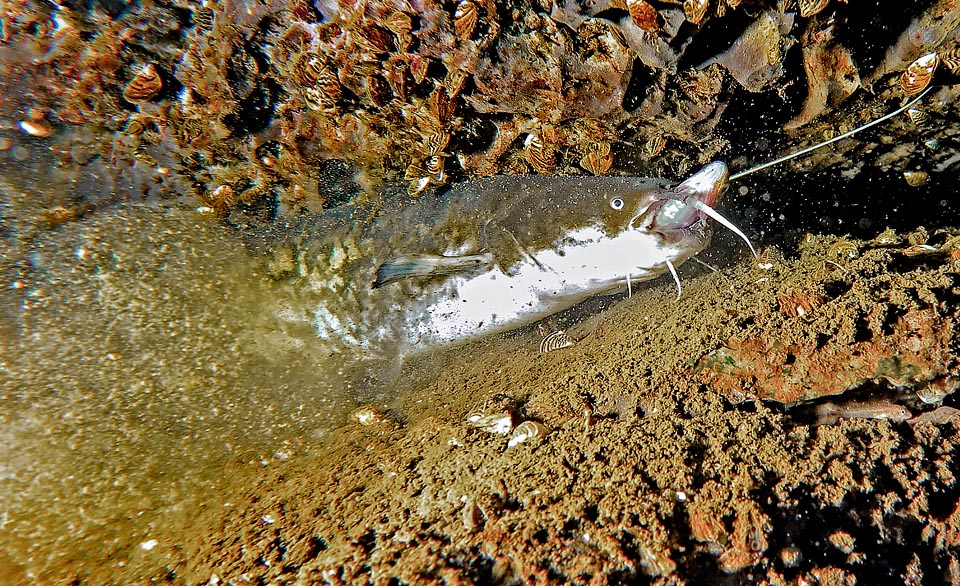 A dart, a cloud of dust and also this is seized with no escape. Of possible Danubian origin, the catfish has diffused, thanks to the man, in almost all European rivers and lakes with serious damage to the local species. The flesh is good even if, due to pollution, before eating it is perhaps advisable to have the water analyzed © Sebastiano Guido

Being a great eater that consumes every day almost the 2% of its own body weight, and finding in the new habitats where has been introduced quite a few natural foes (only the big pikes and zanders), it’s revealing to be a real pest, to the point that in some zones the underwater fishing is allowed even with the aqualung.

In other locations, instead, it is forbidden to the fishermen taking it ashore to place it again in water. Moreover, the flesh is good even if, due to the pollution, before eating it would be better to contact the veterinary authorities.

In the origin countries, besides the flesh consumed fresh or smoked, the skin is utilized for producing glues and for the leather industry. 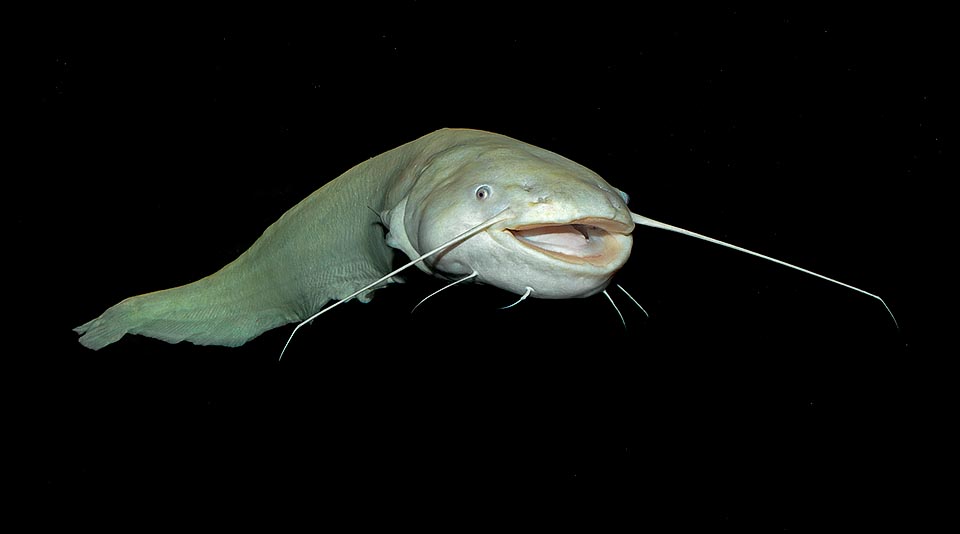 When the water exceeds the 20 °C, the males dig small basins that will cover with weeds and twigs where the spawning will take place. After the fecundation they will defend them and will aerate them from time to time until the hatching. This can vary from two to ten days from the deposition, depending on the water temperature. It is estimated that the number of eggs is of around 30.000 per each kilo of weight of the mother. The newborns will remain in the nest till when they have not competely absorbes the yolk sac and will reach the sexual maturity in 2-3 years.